There has always been something about treks that return the same way they came that irks me. Of course, any day spent hiking is a good one, but days where the trail is one I haven’t been on before are extra special.

I don’t know about you, but a new trail is like a treasure hunt to me. After climbing a ridge for hours, the anticipation of what the view might be like, 600 meters up and one valley over from where I started this morning is crave-worthy. Coming across a grove of bamboo or tucked-away lake that no one expected are the stories you bring home to tell after the dirt and sun cream have all washed away.

Bottom line, the allure of the unknown is one of my absolute favorite pieces to the trekking puzzle, which is why trekking to Everest Base Camp was such a pleasant surprise. 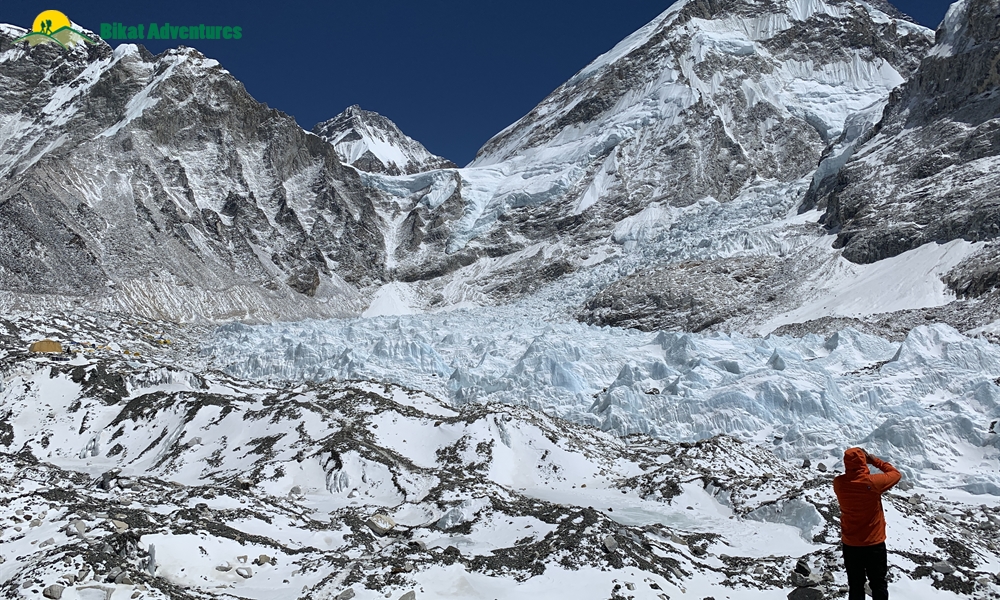 View at Everest Base Camp

Let me be clear, the trek to EBC is not your straightforward, back-and-forth route. In fact, it’s about as customizable as hiking routes get. While most people choose the standard route that takes trekkers up to see Everest and then back down the same way, you’re not stuck with that if you’d rather spice it up on the return journey.

How to Trek Everest Base Camp via Gokyo & Cho La 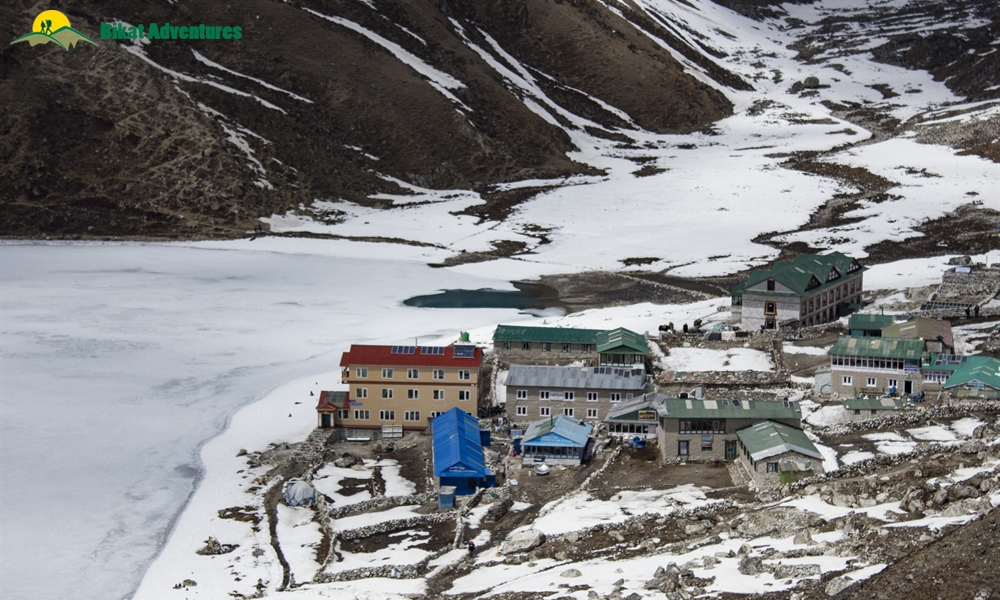 Gokyo is a stunning little village on the shore of an enormous lake, frozen pearly white in the early season and glowing a neon turquoise by mid-season (usually May). The lake is part of a high altitude wetland system that cascades down the valley from the 8,000m peak of Cho Oyu, and rests beneath the shadow of Gokyo Ri, a 5,357m trekkable peak that people often climb once they reach the village. The view is well-worth the ascent, with summiters able to witness four 8,000m peaks from the top - Makalu, Cho Oyu, Lhotse and Everest. 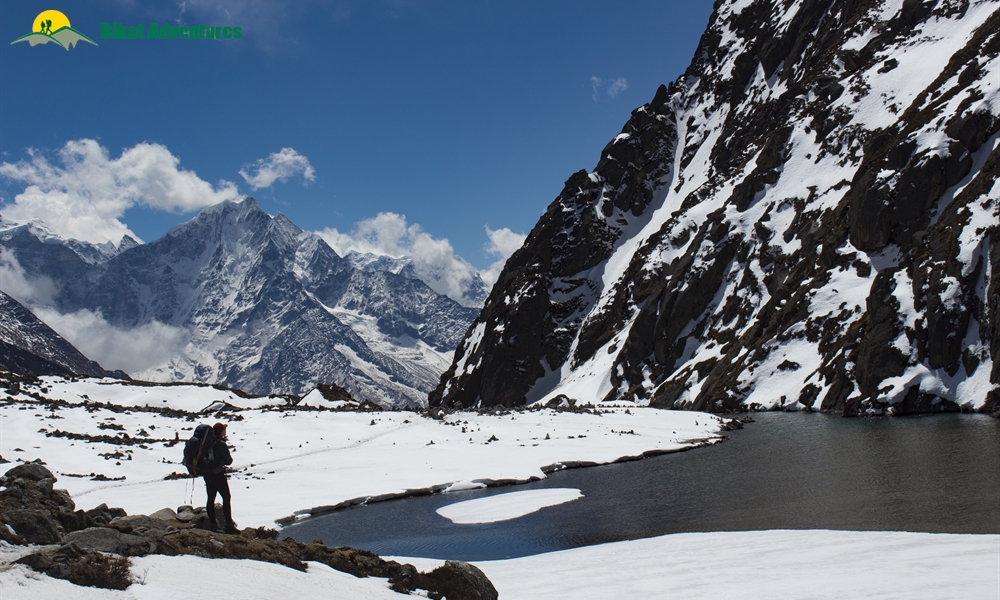 First and smallest lake of the Gokyo Lakes

For those feeling truly adventurous, you have the option to combine the Gokyo adventure with the standard EBC itinerary and create a trek that is truly spectacular. So, what is the difference?

To incorporate Gokyo into the EBC trek, trekkers have the option of doing it two different ways. No matter what, the trek will start through Lukla, where you fly into the region, and will route through Namche Bazar. After Namche, trekkers can choose to take the route that leads them to Gokyo first or EBC, after which they will continue on to the other via this circular route. 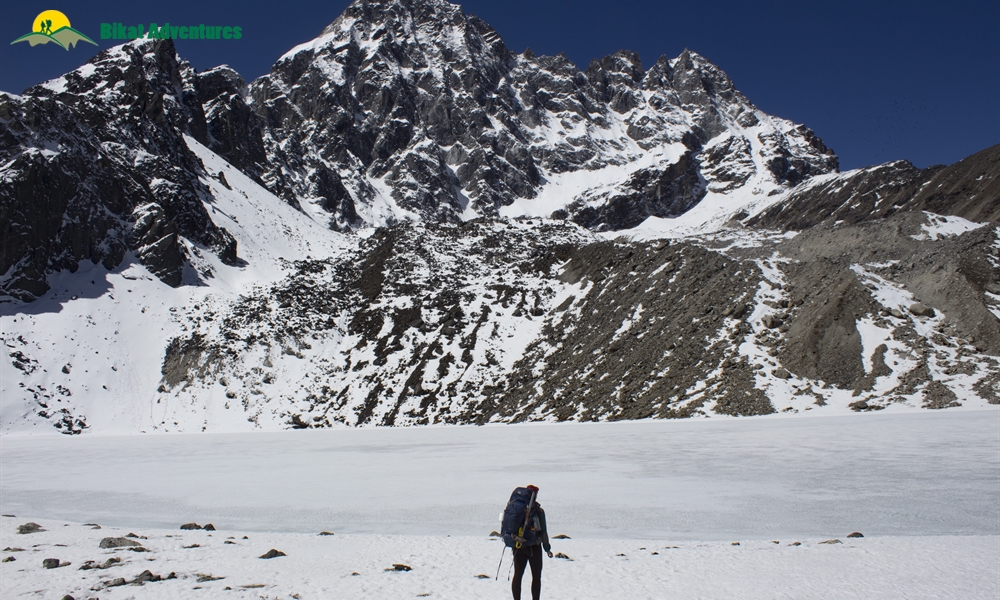 Second of the Gokyo Lakes

What lies in between, connecting the two routes, is an extensive crossing over the Ngozumpa glacier to the village of Dragnag, and then a long, strenuous day over the 5,371m Cho La Pass down into the village of Dzongla. From there the following day, you move on toward the village of Lobuche, officially connecting you back to the main EBC route, from which you will then visit Base Camp.

The alternative is to trek the standard itinerary up to EBC first, and then divert from Lobuche towards Dzongla and Gokyo afterward. The choice of which direction to take it is yours, and I love that about this route, but a word of caution - Cho La is easier done post-EBC coming from the Lobuche/Dzongla side than from the Gokyo/Dragnag side. 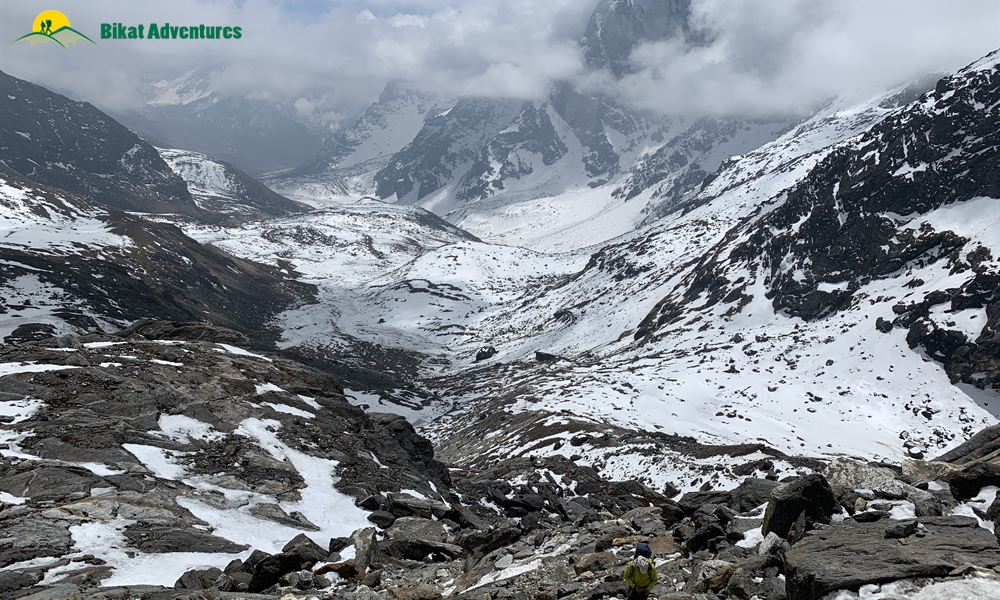 Here’s the deal. Cho La is a beautiful beast. She demands your attention, your energy and dedication to get to the other side (whichever one that may be). No matter your route, you will most likely need microspikes and a very early start (like, 5 a.m. kind of early) - something I heard many people along the route say was one of the things they wish they knew before trekking EBC.

From Dzongla, you climb 550 meters, on the way encountering steep sections of trail-less boulder fields, partially covered in ice and rotten snow that require you to scramble (read, climb) up. After leveling out slightly, a narrow trail with a drop off to one side needs to be followed (microspikes very helpful here), following which you enter on to the glacier. During the early and late season, snow accumulates and covers the path, and a guide is extremely helpful to help you navigate across. A final short, but steep climb brings you to the top. 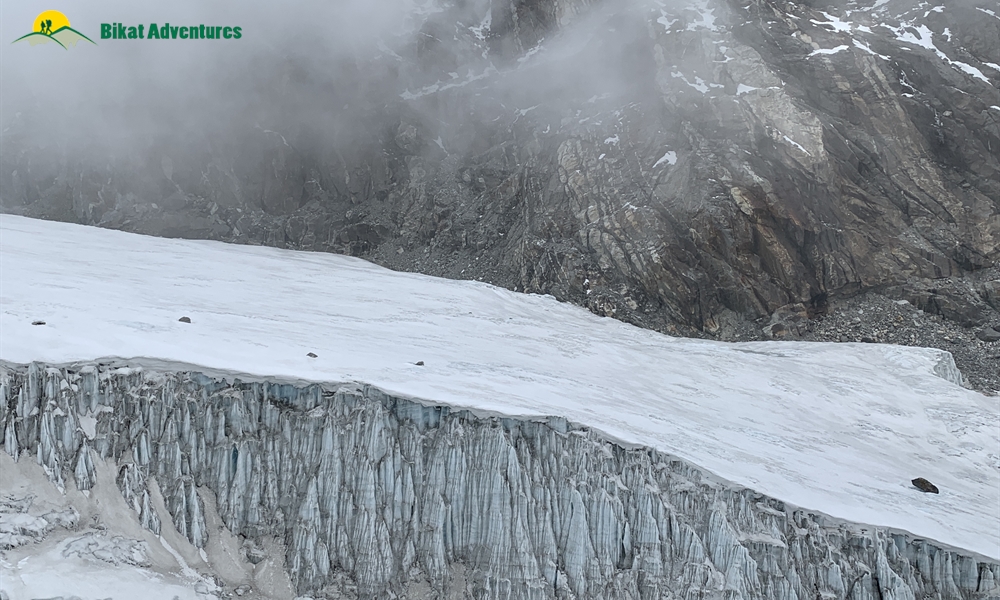 This is where I excitedly (and very naively) believed that everything would get easier.

As steep as the ascent had been, the descent took it up a notch, with more of what we now had come to understand was Cho La’s specialty, loose boulders, complete with more rotten snow. After descending 350 meters at a snail’s pace and crossing moraine, on our 7th hour of hiking, we stood at the bottom of a ridge.

We checked the map again, not believing that going up was a possibility.

Spoiler alert - it was. 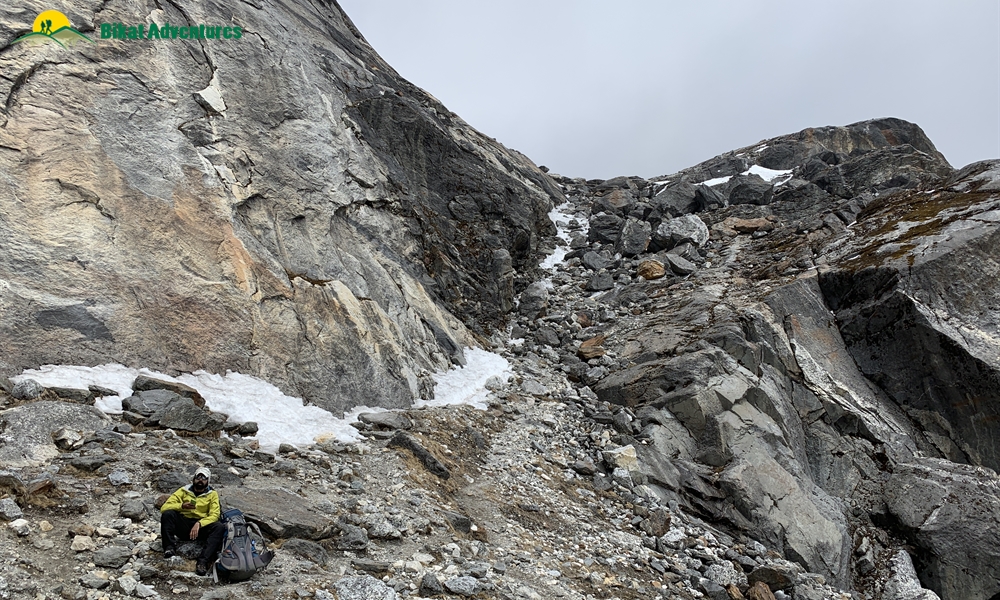 Just before the bouldering section on Cho La Pass

So we climbed 150 meters back up so we could descend into the neighboring valley, all the way down to our beds waiting 450 meters below us in the village of Dragnag.

Despite this direction’s difficulty, coming toward Cho La from Dragnag presents an even greater challenge. The approach and ascent are much steeper, and present more altitude to be gained in a day than from the other direction. When we reached the top of the pass at 12:30 p.m., we encountered a group coming from Dragnag that had begun at 5:30 that morning. It had taken them seven hours to reach the top, and they still had 550 meters to descend. 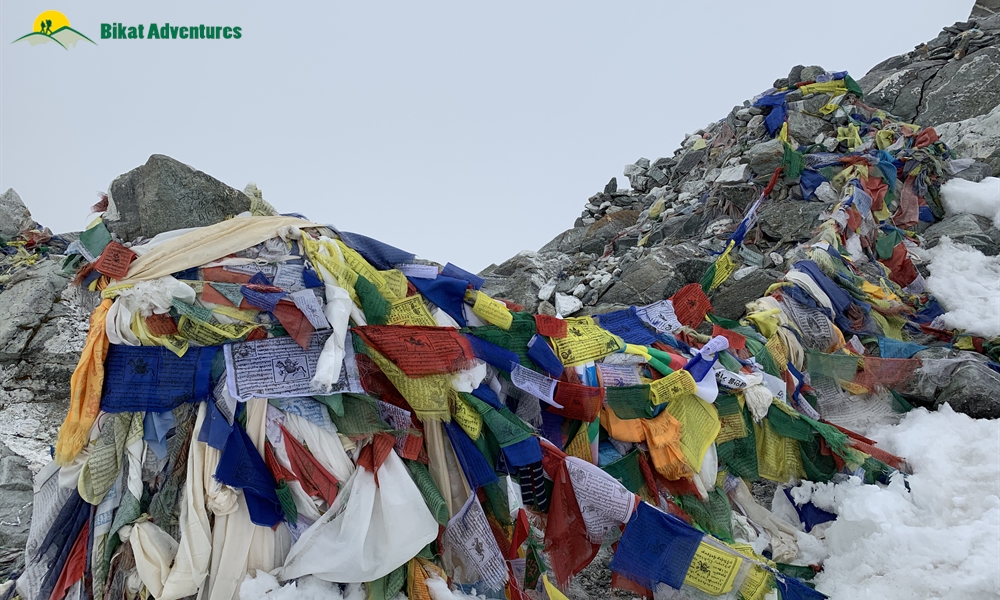 My point is not to dissuade anyone. After all, I wouldn’t write an entire article about the EBC + Gokyo adventure if I didn’t feel that every exhausted breath was worth it. I write this so that every trekker knows about this phenomenal option that is available to them, but also so that they can make the most out of it by being prepared.

Long story short, I have nothing against the traditional EBC route. After all, you can’t complain about visiting one of the most beautiful countries on the planet to trek to the base of the world’s tallest mountain.

BUT, if somehow you could make it even more amazing, wouldn’t you?