A night beside the frozen hills

After spending a quarter of the new year inside a trivial folder among many in my PC, and a special note on the clipboard of my mind, this one had to be shared. This post mostly revolves around the Dhauladhar hills and their might, three Gurgaon colleagues, and a mountaineer.

THE FOUR (FIVE) OF US: The one on the extreme right is the trained climber we met en route and photo credit goes to Rahul, who was mostly the man behind the lens 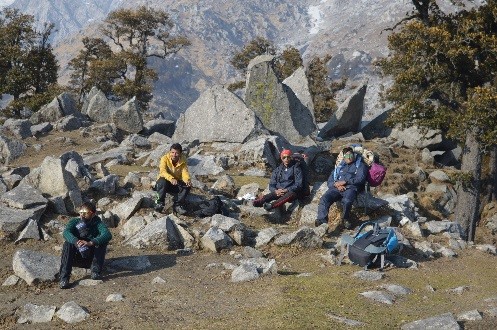 It all started with my nostalgia for the mountains, a call of the wild as soon as I returned from a short solo trip to Mussoorie, which itself was the start of my tramping diaries. Two of my colleagues upped the ante and got ready for the uncouth plan. But till the time we completed whatever we had in that semi-prepared plan, we were totally unaware of the things we would be facing in the next 24 hours; and certainly not that they would stomp up like a souvenir on the walls of our brains.

The Dhauladhars: The way I look at the mountains, like a playful child thrilled on visiting the amusement park 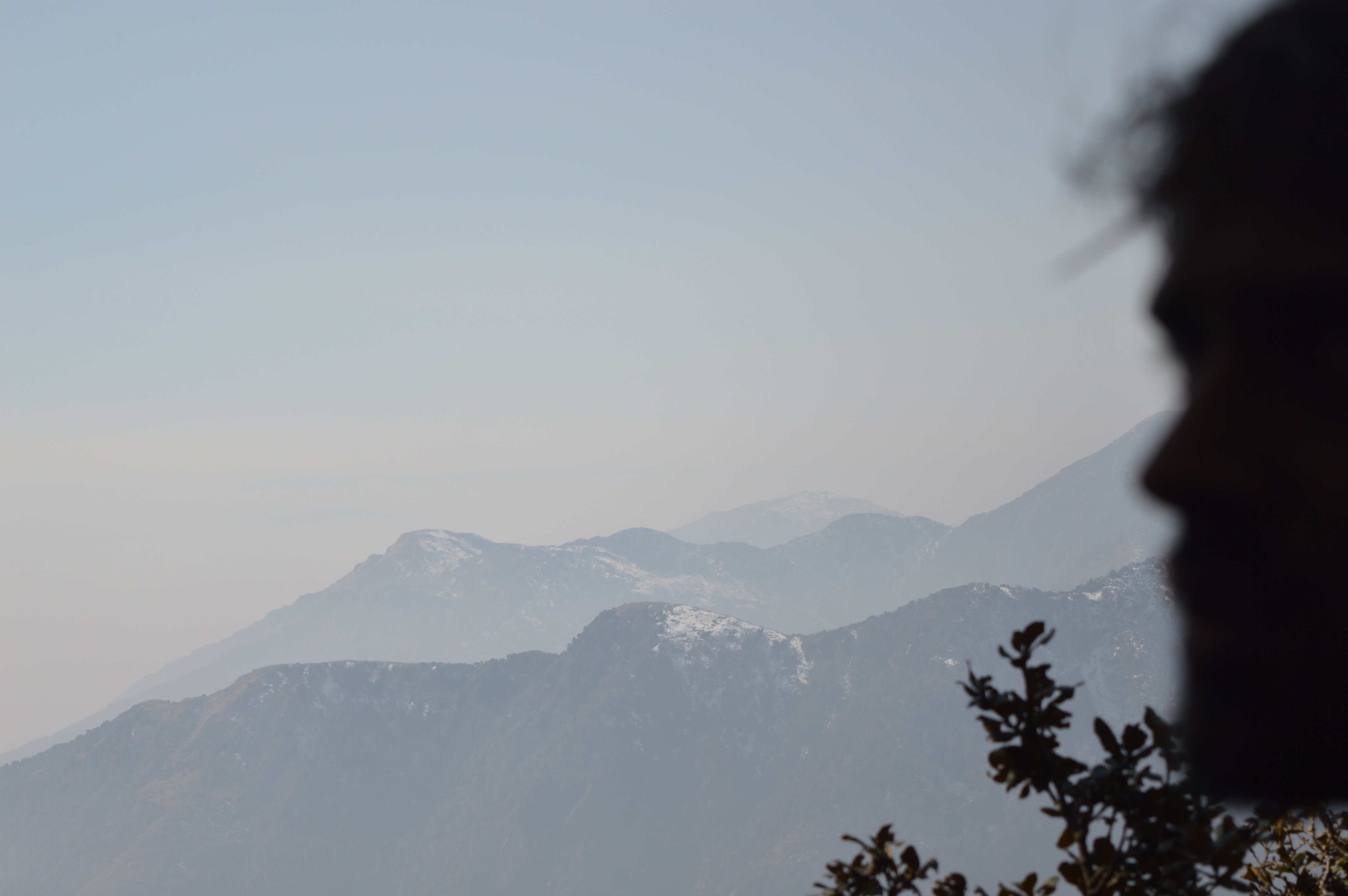 After loading our one-for-three rucksack with warm layers, we were ready to leave with an uncouth plan and a desire for the hills.

After all those hours of half planned errands and reaching the beautiful hill station of Dharamshala by night, we enveloped ourselves in the cozy bed of a reasonable hotel room to spare the temperatures outside.

We left the hotel room at 7 am, leaving the excess luggage there itself keeping ensured with humane nature of the mountain locals, the cab we booked cab us to the starting point of the trail and we were all geared up in our robust boots and multiple layers. Soon, we realized that the milieu didn’t ask for such preparation, the trail was quite simple at the start and the temperature was about 18-20 degrees.

On the way to TRIUND hill: When we started along the deep scenes 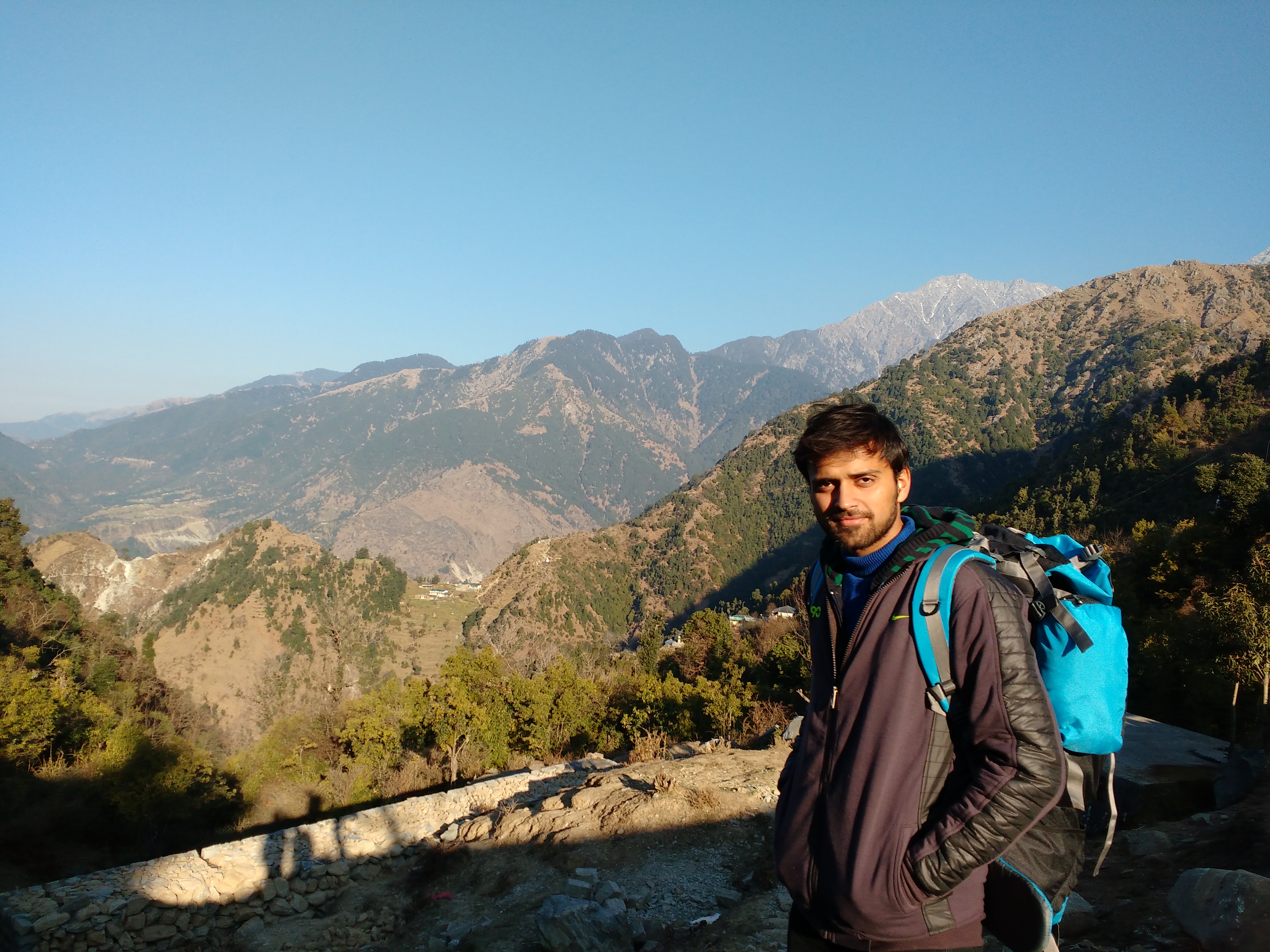 The early exertion made us sweat, and we were bound to lose layers, I hadn’t thought that these layers would serve as the last resort to save our frozen souls in a matter of few hours. We ducked on and on and on. We clicked pics wherever rested and took chocolates and bread on the way to stay hydrated. Hiking up the endless path, we met new friends, a ceaselessly walking girl named ‘Harshi’, a well-mannered chivalrously posing canine who took a great shot with us and we carried on together, satisfying our drowning hopes and keeping them alive by fooling around scattered patches of ice which managed to retain its ‘solid state’ escaping from the sun rays. Through all this heat, clutter and hydration pauses, we suddenly reached the top of the Triund hill and the snow-clad peaks which seemed to be at never-ending distance throughout the hike, suddenly were bullying on our heads, right in front.

It was an awesome scene. For a few seconds, I was spellbound and had no clue what to say in appreciation, I was so close to my love, and that petrichor-ish fragrance spread around. Then we sat back to have some rest and selfies, we were relaxed and chilled out as we made it just by mid-day, thus sparing a big window to make plans. Someone called us from behind, a couple of young guys, with strong built, seemed to be our age. It was a ‘such a small world’ situation as we came to know that these guys lived just a few miles from our stay back inGurgaon. After we got along they told us they are planning to go further up in the white peaks and will trespass the trail which is closed due to bad condition at that time. They offered us to come along.

The mighty Dhauladhars as seen from TRIUND: at nearly 3000 meters, you can see the guy resting on the trail to snowline cafe near the center of the pic, that's me. 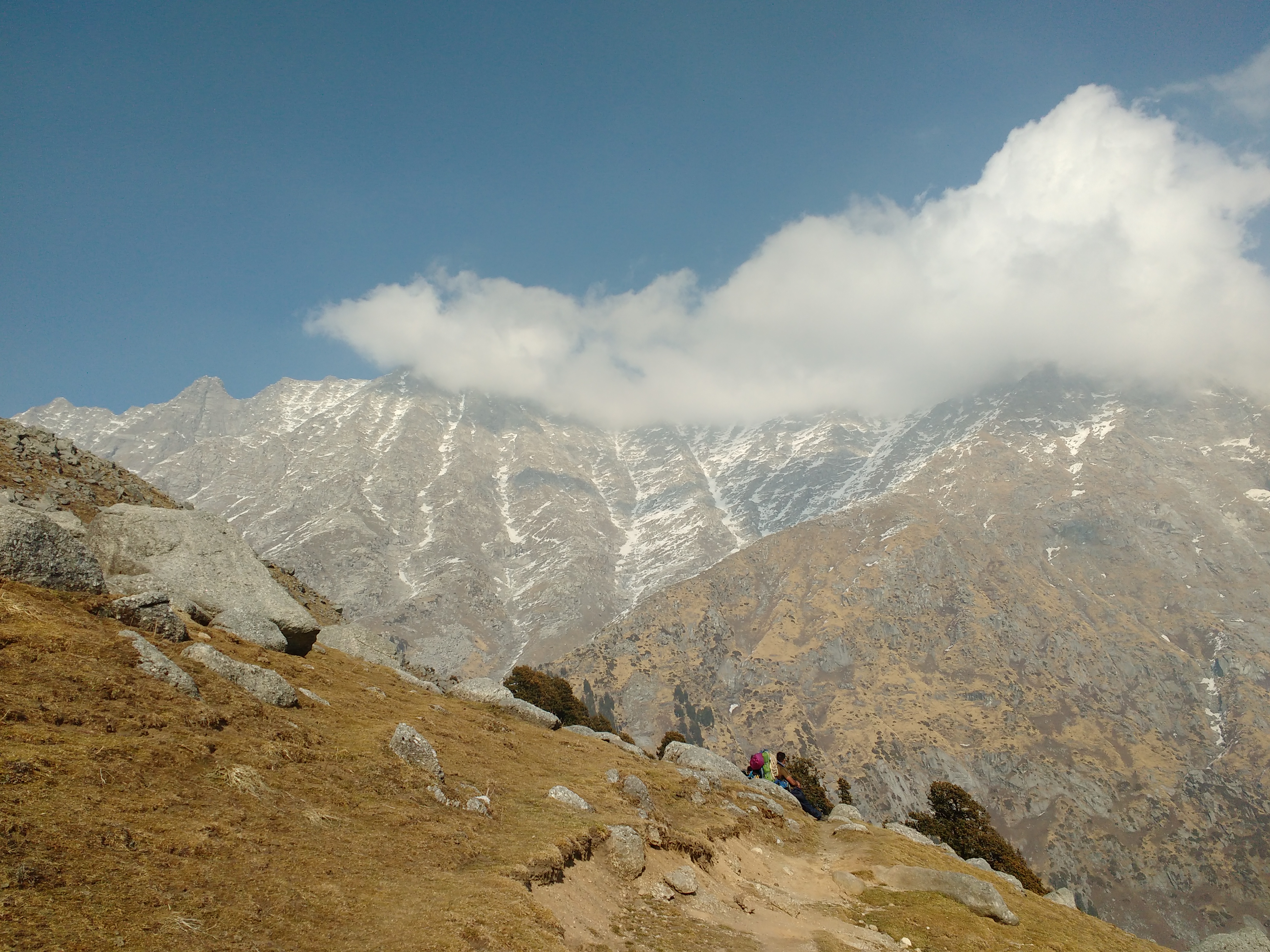 Now, I was the sole decision maker, it was my trip and I had to make sure that the other two are comfortable with my plans. I knew we were unprepared and had no Idea of high altitude trek and climbing. But then we ascended to the call of the mountains, with just a play that we’ll be safe. That decision was the character of spontaneity at its best, soon we left the beaten trails and the ‘tourist’ crowd behind and we were wayfarers of the wilderness. It was a hot day and the trails were barren mostly as we were close to the tree-line, a height at and above which no trees grow. After some time, we reached another line called ‘snow line’ and yes it was a dream come true and I was delighted that now onwards we’ll walk over pristine shimmering snow. We put on our goggles to avoid snow blindness and kept moving through the rhododendron. It was a quaint feeling to walk in those trails marked by our leader Narendra, the stronger of the two Haryana guys who was a mountaineer. We kept on and on with my snow boots performing at their best to resist any moisture from my feet.

After quite an hour of walking in the snow, we were startled as human footprints vanished and all we were following were footprints of bears and foxes. A chill ran through the spine, and although Narendra accepted that it’s a common sight for him, we were NOT from his league. We reached a meadow after some time, from where the trail to the Indrahar Pass was vivid, but we were late and Narendra decided to leave the idea to climb for the next morning as we would set up the camp there only.

The snow covered trail after the cafe: We were carrying our thick rucksacks along the rounded slopes trespassed on all sides by footmarks of wild animals 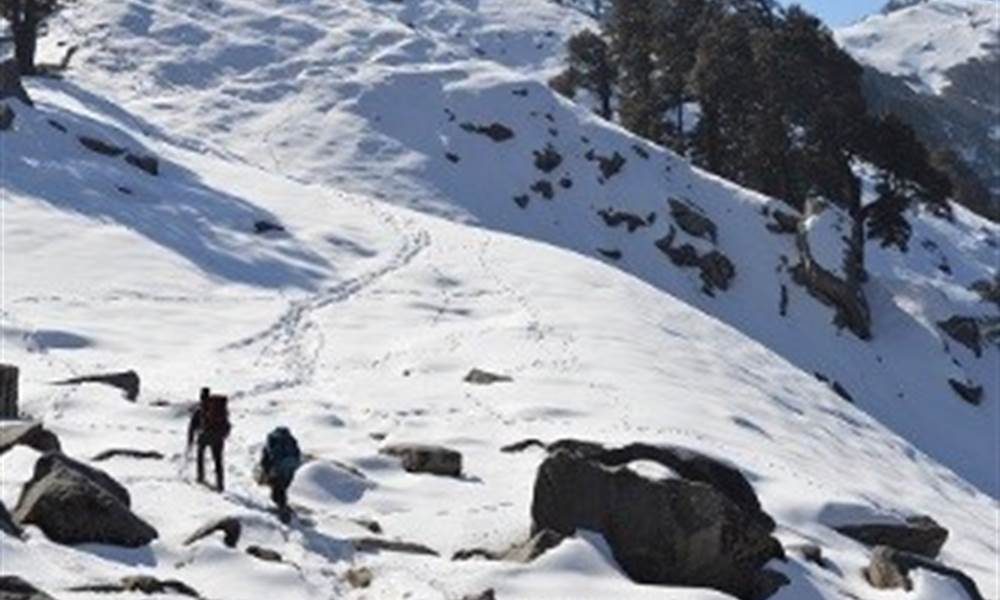 Setting our temporary home: This Quechua 2 person tent had to shelter 5 healthy adults plus over 50 kgs of baggage for the chilling night ahead 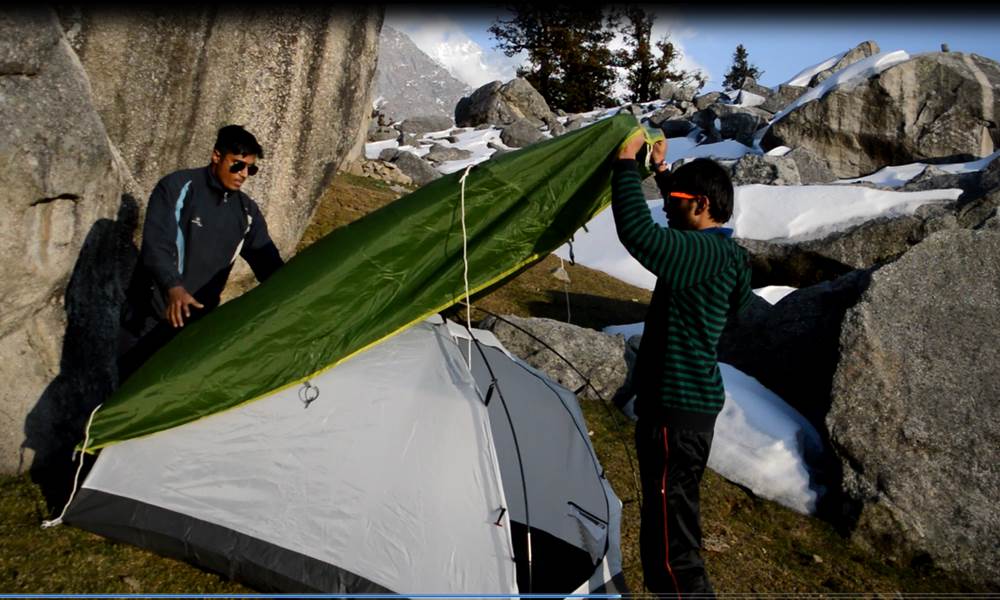 This place was nothing less than a piece of paradise, with the bullying white peaks on one side spine-chilling snowfield on the left, heartwarming meadow on the left and a setting sun in the valley up front. As per our leader, we fixed our petty camp which was a puny two person tent which was to accommodate 5 healthy guys and their rucksack for the frozen night ahead.

“You better light up your smoke before the sun goes down, the Himalayas can spare you astounding scenes, but NO mercy or fortitude for the subzero nights.”

As soon as the sun disappeared a cold wave ran through the valley, it seemed as if the temperature has dropped by 5-7 degrees in seconds, we were trembling and adding layers, thanking God that the smoke was already lit, we started boiling snow for water. As the sun left his effect, the moon took over with its glistening light dimly lighting up the whole valley, which looked eerie and beautiful at the same time. There were voices all around the valley which we never heard before when enquired he said ‘welcome to the wild!’ They were bears and canines, warning us from the bottom of the valley and marking their territory…

The heavenly Ilaqa valley: The scene in this image is however not doing justice to what the eyes witnessed, lest NO lens could catch that majesty 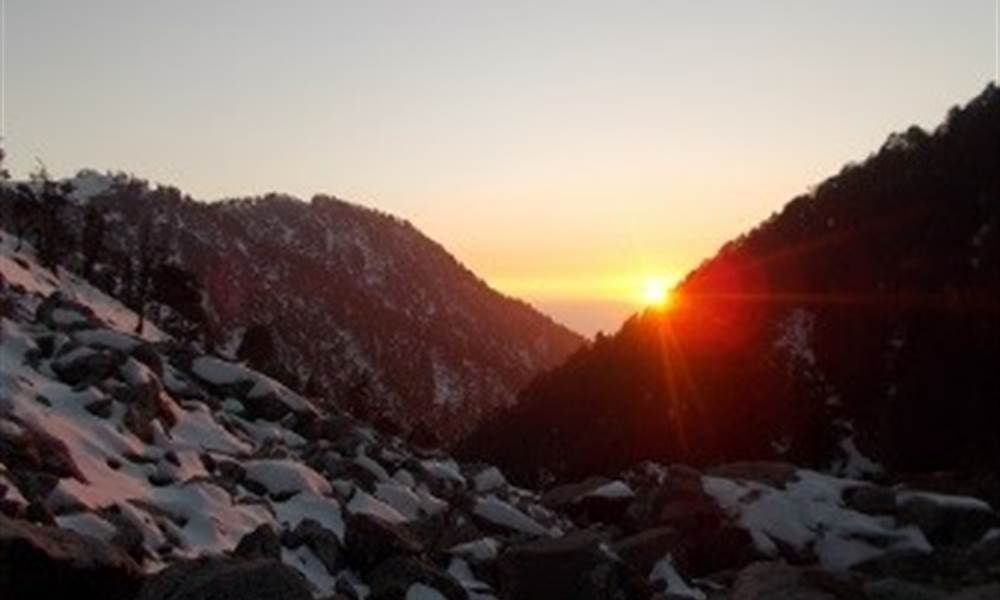 This one being the uncaptured part is the account of a night I would never forget. It starts with night scene, and because of the perilous conditions outside our pity tent, we couldn’t afford the luxury to stargaze and take snaps. The night was chilling, and our bodies confined to 5 persons in a space of two, were fatigued to all limits and was craving for room.

But before we entered our tent for the final time of night burning all food waste, lest attracting bears and foxes at night…

I somehow managed a few morsels of Maggi before we all went inside the tent and trust me, on the hills, night seemed to be like a never-ending ice age. It was only 10.30 pm, and there were creepy distant voices all around and we were freezing laid over one another inside the little shelter of ours. A layer of ice had coated the ventilation tent and we were just praying to let the night pass. Suddenly, the voices drew closer and amidst the modest silence we all had maintained to pretend our fake composure, broke as our pan which was kept outside tumbled. It was something outside, as someone wasn’t a possibility. We all shouted together and ‘it’ ran away to our sight. After waiting for a while we got out and felt the chilling beauty of the valley and the panoramic mountains.The Dhauladhars were shining like pearls with a blue tint and the valley was (obviously) snow-white. Everything was whitewashed by the full moon and the howling of wolves was ghostly, but unfortunately the cameras were dead by evening. I can’t express that eerie beauty, in one word, it was OTHERWORLDLY.

Narendra melting snow: This was the most painful errand for the night, as snow was the only source to quench our thirst, it took that much snow to make only half a glass of water 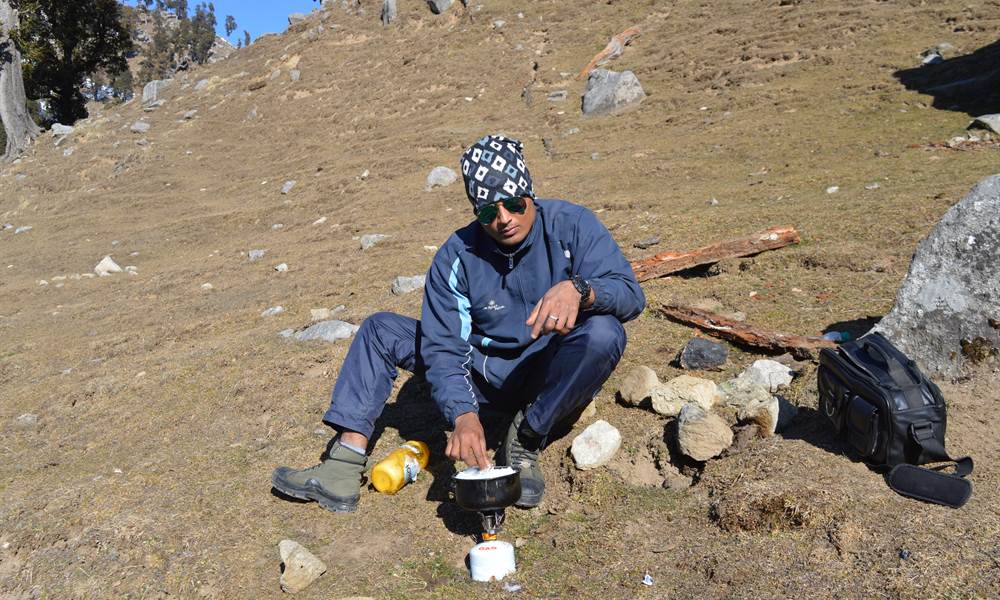 Light was finally spread like ether of hope through the valley after that hopeless night. We were joyous and confident, one of my friends, Abin wasn’t that comfortable, though. He suffered from altitude sickness. After a lot of brainstorming, and pondering over we let go the plans of climbing the pass. We had some time before leaving back for Mcleodganj...

We were a team and the gear was only for 1-2 people, we enjoyed the comforting heat of the sun baking us softly on a hill as the sly fox disturbed our tent down in the valley… 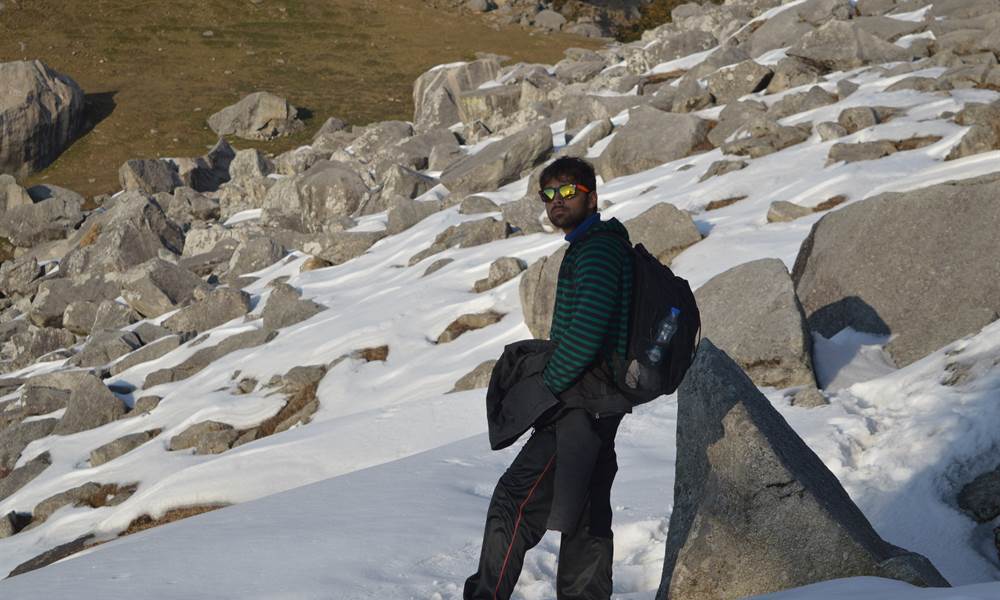 A few tips worth sharing from the experience:

Although the experience was a memoir for many years to come, still it would have been a better version, had we planned it through. It was not possible in our case as we led through the course of serendipity, but now that you guys have read this, you could go for the pass with a few measures under your belt:

1. Take a window of 3 days for the trek, if you are planning for the Indrahar pass.

2. Carry all comforting material- 0-10 deg sleeping bag, waterproof mats, rainproofing poncho, an extra tent if the group is large (for the baggage to remain dry in case of rain)

3. Don't trek at night, the area is full of wild animals; follow all camping rules.

4. Carry a butane burner with enough gas, as snow is the only source of water.

6. LAST, BUT THE MOST IMPORTANT PART: DONT LITTER, CARRY YOUR TRASH BACK IN YOUR SACK, OR BURN IT AFTER USE, MOUNTAINS ARE BEAUTIFUL PLACE, AND IT IS OUR DUTY TO ENSURE THEY REMAIN PRISTINE 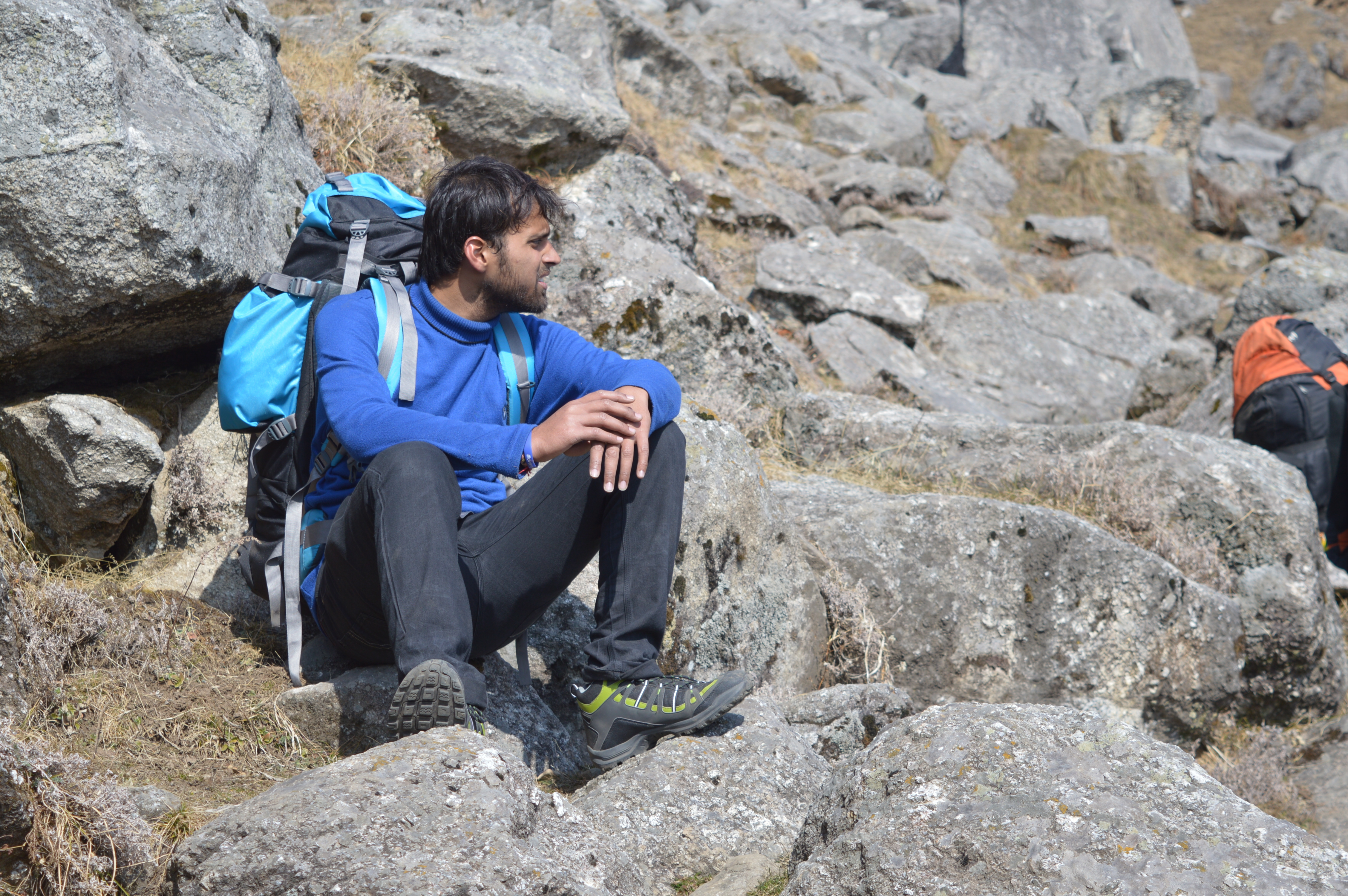