Going on a solo adventure is a passion many of us secretly cherish and dream in our all too dreary work life that we tend to call Reality. Well, this blog is about my adventure into the untouched beauty of Brahmatal which lies in Uttarakhand, though not as famous as its closest neighbor Roopkund its beauty emulates closely to that of Roopkund. Let me tell you about my first adventure to this magical place before I drift away into dreamy ramblings.

Wrapping up my 2 years rigorous course of MBA and suddenly finding myself with idle time I decided to chuck the usual vacation plans and instead decided to opt for something riskier and scarier and with this I hit upon the marvelous plan of going for a trek to North India alone and for the life of me I could not understand how I am going to achieve it. They say help comes when you are least expecting it and for me, it came in the guise of my friend who told me they too were going for a trek in the north and took the help of expedition company "Bikat Adventures" to arrange it for them. Immediately I checked it out and based on my time and considering this was going to be my first ever trek anywhere I chose the 5-day trek package to Brahmatal Summit. After considerable research online I realized this company had a great reputation when it comes to Himalayan treks so without much delay I booked it. Within a few days, the trek coordinators got in touch with me regarding the equipment I needed and other formalities.

Finally, the day of leaving for the trek came upon me and with a half excitement and half fear in my heart, I boarded the flight to Delhi and somehow managed to find the bus stand where I had to board another bus to Haldwani. After a 6 hour journey, I managed to reach Haldwani bus stop where I had to wait for an hour to meet the driver who would take the trek group to the base camp Lohajung which was another 9 hours of journey in a Tata Sumo. Soon our little group which was a total of 3 members including me due to the Holi week most people had opted for the later expedition batches set upon the journey to Lohajung. The driver was a really nice guy who kept answering our never-ending questions about the people, the various cultures, even the landmarks in each of the regions we kept passing by. The drive itself was beautiful as it kept winding down on roads with sunflower fields which shone like gold on one side accompanied with fairytale houses of the locals and on the other side the mighty Himalayas as vast and unbroken as the eye can see and just when I could barely contain my joy to see such beauty, the mood was set by the beautiful Garhwali music which was playing in the car and suddenly I felt like a true traveler sinking into the beauty and history of a place I could very easily mistake for Heaven and just like that we reached our base camp Lohajung.

The first day of the trek was all about reaching Lohajung where we were given room to freshen up and rest before the main trek would begin. While we were enjoying the beautiful view of the mighty mountains from our room sipping tea in temperatures of 8 degree Celsius we met our guide and the trek leader and it was there we were given the bad news. Due to the approaching Holi festival which was a very important festival for North India especially for the people residing in the mountains we were given the option to extend our trek by one more day. As the day we had booked tickets back home was hold and hence there would be no transport back to the city or we could shave off a day from the trek but they would ensure we would get to trek to all the locations that was promised on the trip only we would have to walk extra miles per day to ensure we get to stick to the planned itinerary. So basically we had to complete the 5 day trek in 3 days which was a massive task for a beginner like me but we viewed this as a challenge and agreed to it and with this we retired for the night eagerly awaiting the journey that lies ahead. 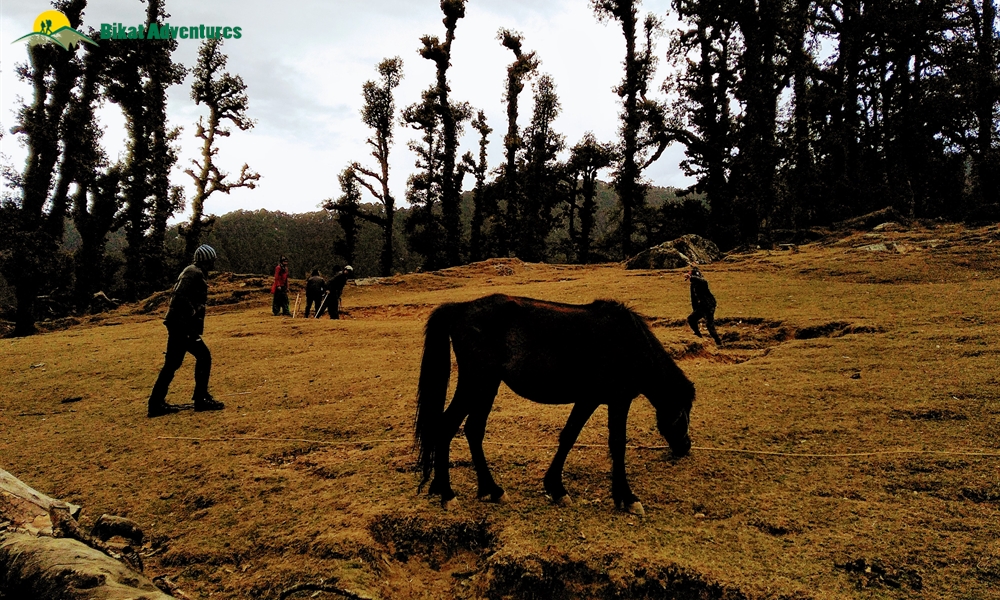 Horses grazing on the slopes

The next day early morning our little group left for Daldum which was our final destination for the day and it was going to be our base camp for the next 3 days. The total trek distance till Daldum was around 7-8 km and the path began on rocky hills weaving its way into the mountains I was gazing just yesterday from the comfort of my room. Being my first ever trek and even doing jogging for 5 km every day before I left for my trek. However, it did not prepare me enough for the harsh cold climate coupled with the steep pathways through forests laden with snow in patches and our little group had to take multiple breaks in our journey to catch our breath but with the contagious energy and support of our trek guide "Gabbar" we managed to reach the base camp Daldum where already a kitchen tent and toilet tent was set up. The camp was set among imposing pine trees and snow with sheep and horses grazing on the slopes and it was just what I imagined a camp should be. We were soon taught how to set up our tents and in the evening while we were having our simple meals and sipping coffee in steel mugs something magical happened Snowfall. It is was truly a sight to behold with me getting my inner child to witness the magic and occasionally tasting the snowflakes each different from the rest and in the blanket of snow all across us we drifted off into sleep. 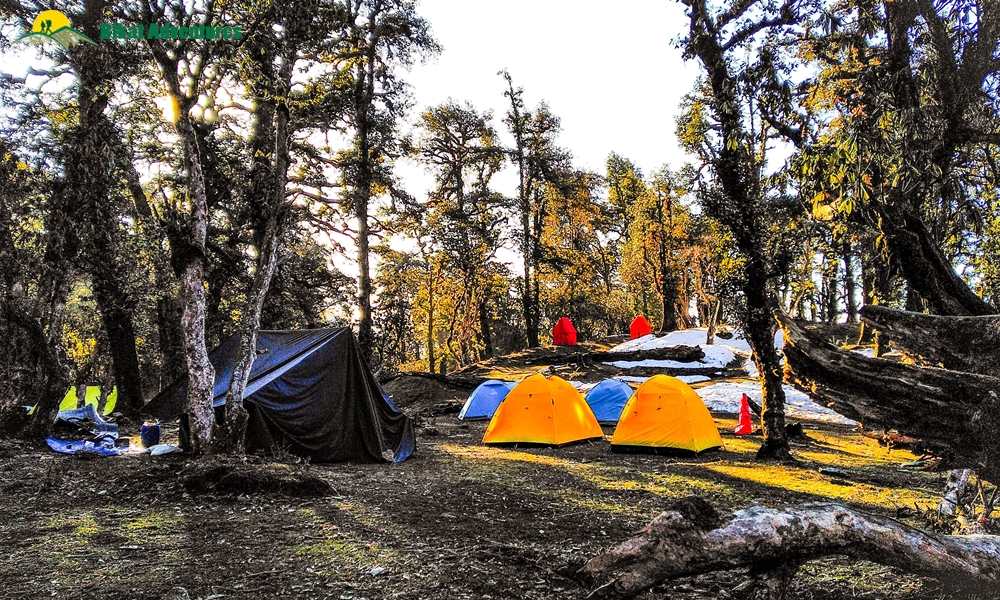 The next day was truly the most challenging of all we faced so far as our trek leader decided that today was the day we would try climbing Brahmatal summit which was previously kept for the last day as it was a difficult climb but our guide was insistent that we could make it and also the climate was perfect for the trek up to the summit and with fear and excitement in our hearts off we set for the summit. The total trek distance till the summit was around 6 km but the incline was extremely steep and to make matters worse the snowfall of last night had started melting creating slippery slopes and false snow surface which led us to fall and slip multiple times but our guide always watched out for us and kept motivating us to not give up. 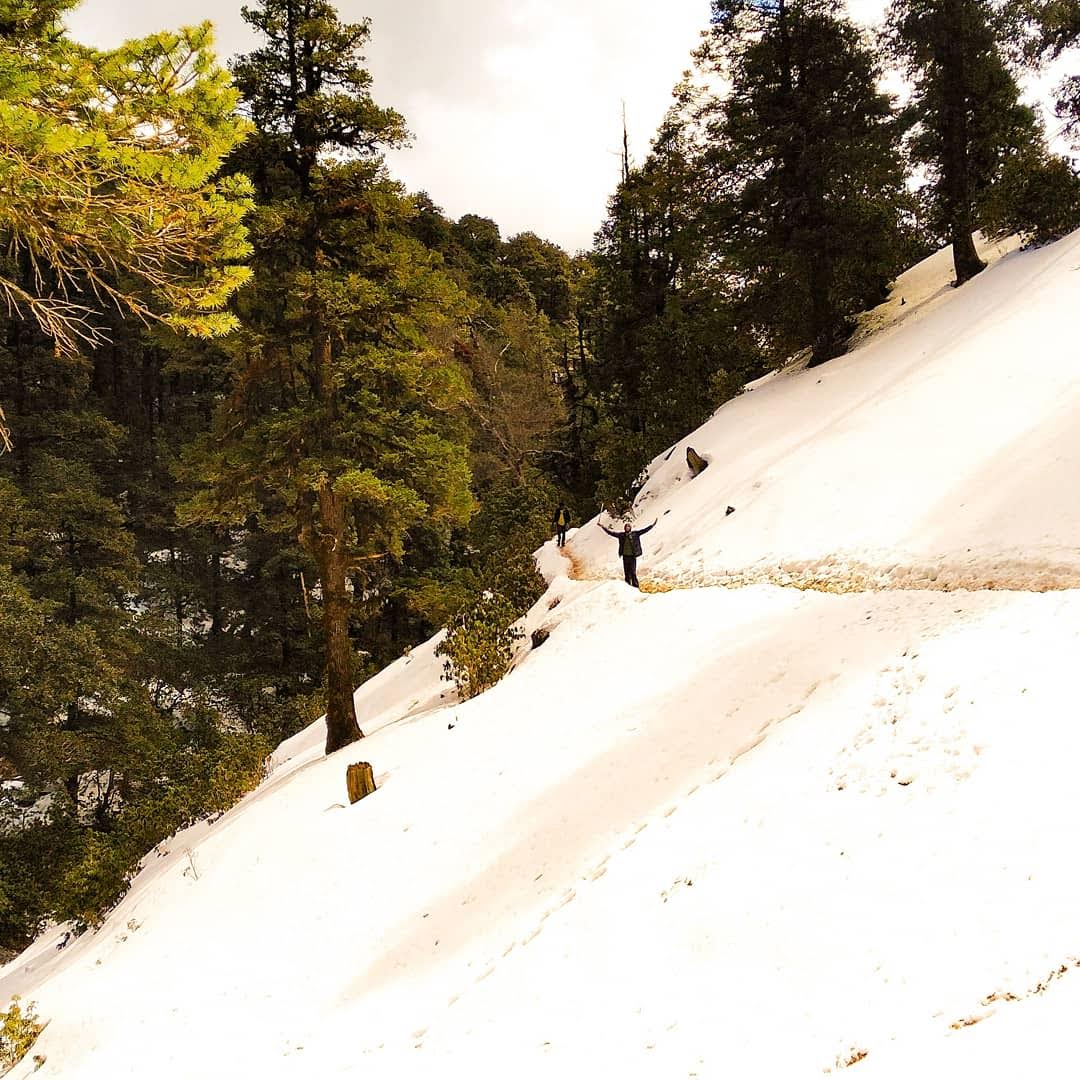 By half the trek distance I was all but ready to head back to the base camp but maybe it was the never give up attitude of my fellow trekkers or some internal motivation inside me to prove to myself that I did not come here to give up, it energized me to push my limits and lo and behold, I entered Heaven for I truly have no other words to describe the beauty of Brahmatal Summit with imposing snow-capped mountains of Roopkund, Nanda Devi and other massive mountains. 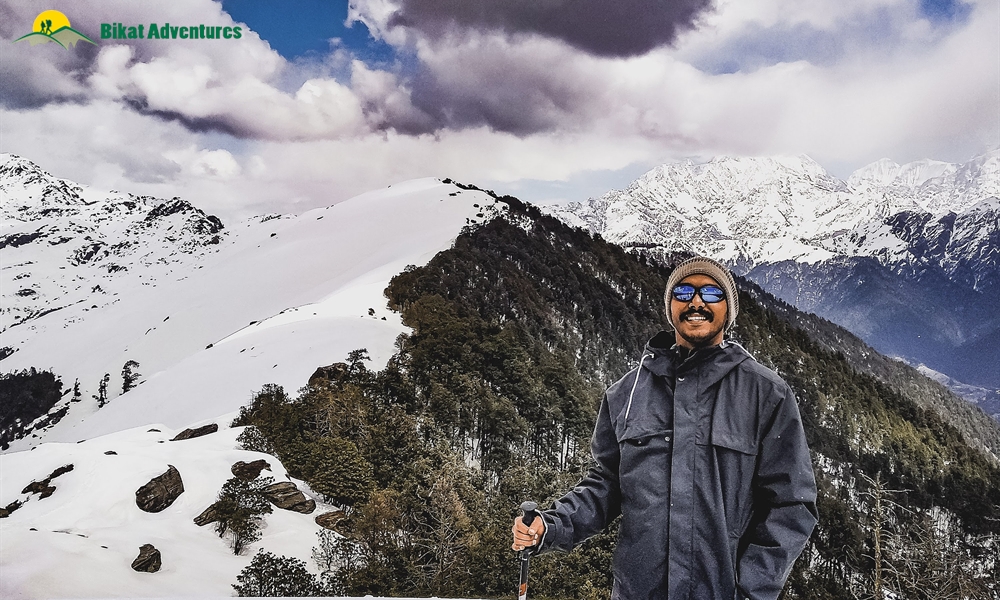 Staggering views of the Himalayan peaks from Brahmatal summit

Sitting at 12000 feet on the snow-covered summit we realized we would not be able to view the famed Brahmatal Lake due to the heavy snow covering around it which made the trek to the lake risky. Enjoying a few more moments on the summit and snowfall showering us again we started having our packed lunch for the walk back to the camp would be even more riskier due to the steep slopes with wet snow but nevertheless we managed to reach back to base camp and we actually did a mini dance of having achieved our trek milestone and with a smile we retired into the night for tomorrow would be our last day here. 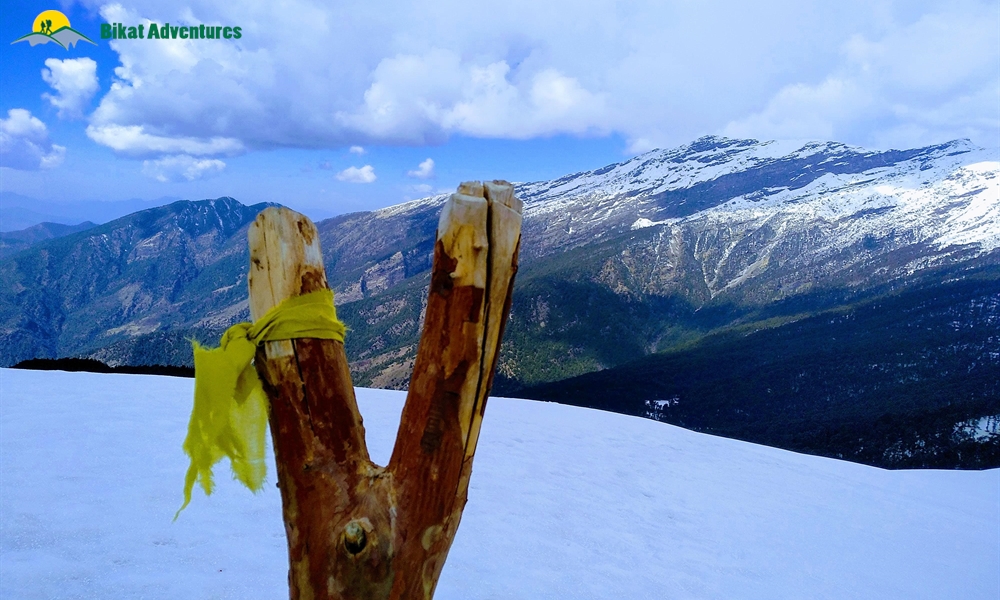 The next day was going to be a jam-packed trek session as due to our agreement of wrapping up our trek before Holi began we would be leaving Daldum today and head back to Lohajung but not before we visit one last gem of this place i.e Bekaltal Lake which was nestled in the lap of the mountains forever half frozen as explained to me by the locals. The total trek distance from Daldum to Bekaltal was around 6 km and with heavy hearts we dismantled our tents saying goodbye to our home for these past few days and set out with eagerness to discover further adventures that lay on our road to Bekaltal Lake and suddenly the trek seemed easy maybe it was because we had done the most difficult part yesterday and had a smug feeling inside that we were prepared for anything that would come in our way from now on. After a beautiful walk among the Rhodendron forests and snow-capped mountains, we reached our destination Bekaltal Lake and true to the name it was half frozen, half in water but magnificent nonetheless. There was a temple built near it and from my guide, I learned that it was a very holy spot for the Snake Gods which were revered by the locals every year. Spending few more moments on the shore of this beautiful lake and with a heavy heart we set for Lohajung which was another 6 km and during the walk back I managed to sprain my knee but having learned never to give up in this journey I walked on till we reached Lohajung. 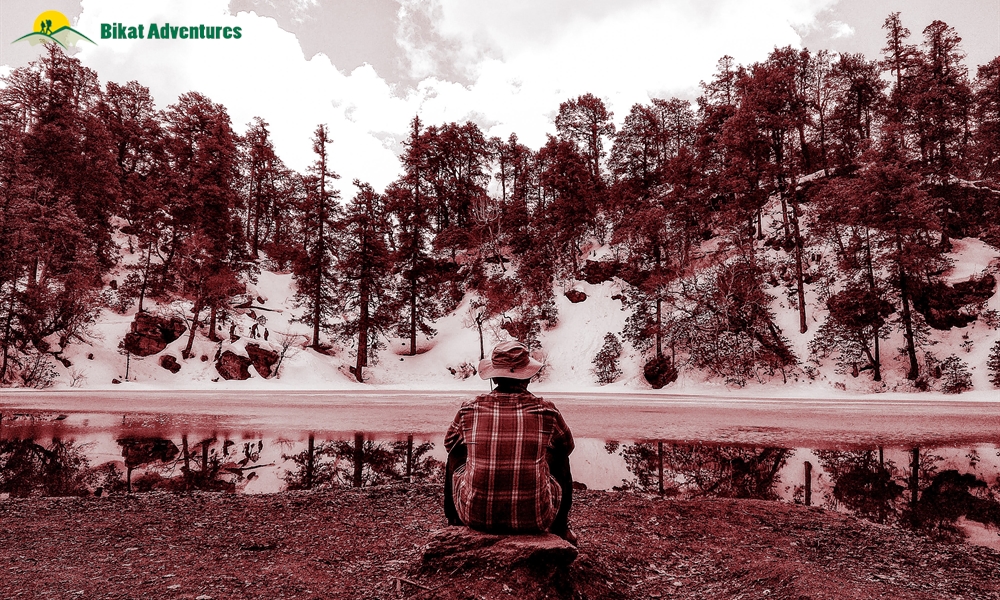 Magnificent Bekaltal - Half frozen, Half in water

The next day early morning we set on our journey back to Haldwani where we would each board buses to head back home but as I glanced into the eyes of my fellow travelers I knew what each of us were feeling that none of us wanted to leave for we had fallen in love with the beauty of Brahmatal. We knew this was not our final goodbye to this place for sitting in the flight back to home I knew I had fallen in love with trekking and the mountains and this was going to be the start of an exciting journey.

Until next time for goodbyes are never forever. 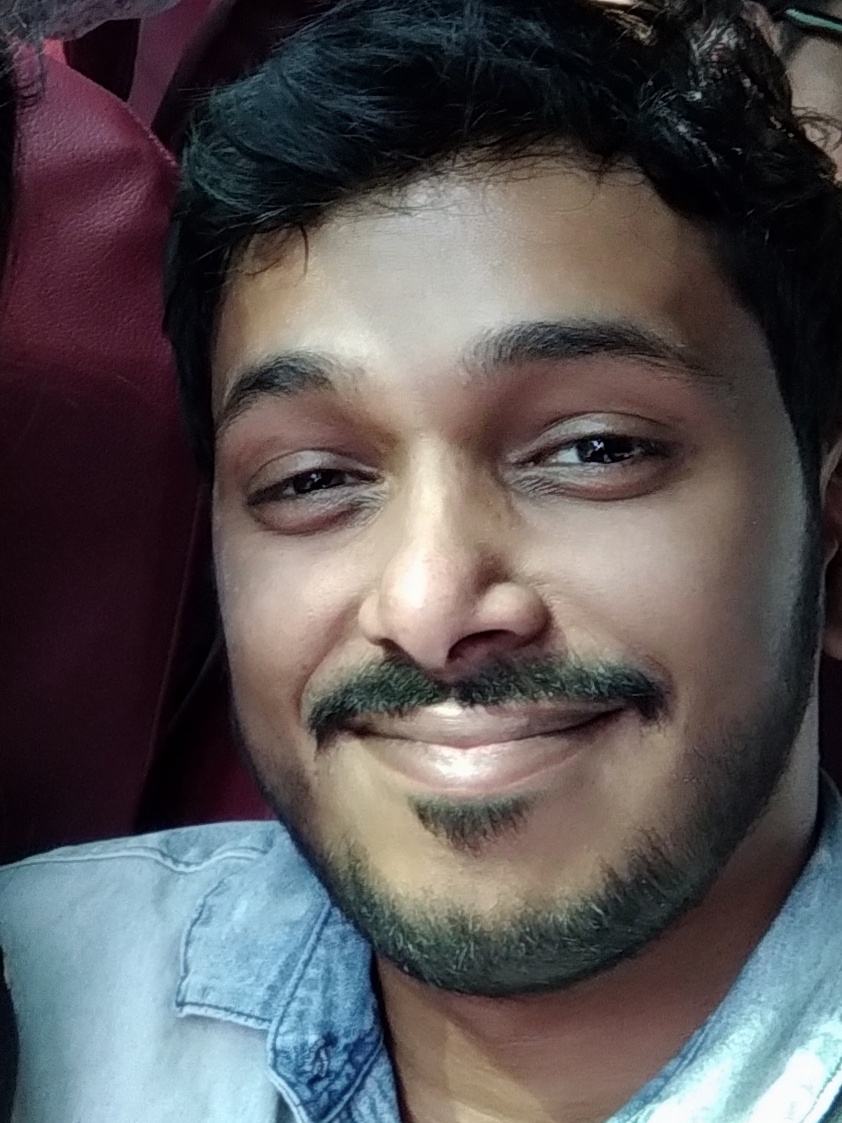 Another Modern Day Nomad with a passion for new and old. Read more