People who relish the mountain trails have a thousand reasons that make them strap rucksacks onto their backs and head out for their next great adventure. If you're reading this, I'm assuming that you are (a) familiar with trekking and have some basic trekking experience (absolute first-timers may not really enjoy this trek) and (b) are interested in browsing through some alternatives for your next outdoor excursion. In an attempt to endorse one of my favourite treks, I present to you some solid reasons why you should go for the Annapurna Base Camp Trek.

Panoramic views of the Annapurna Range visible all throughout the trek

Here are 7 reasons to go for the Annapurna Base Camp Trek.

1. The Grandeur of Annapurna Massif 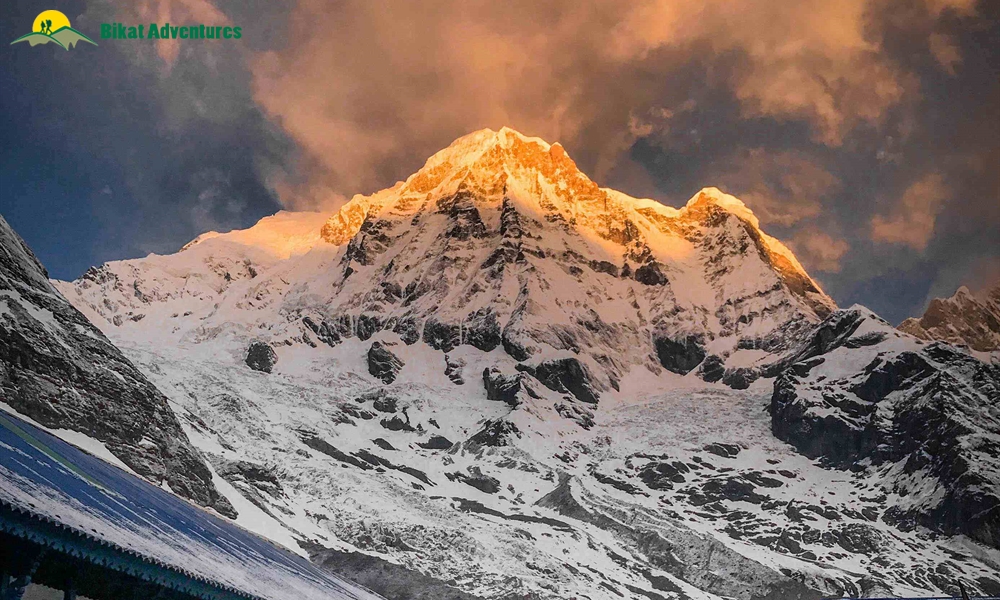 Let’s start straight from the top to get the most obvious out of the way - ABC trek allows us to get Up, Close & Personal with the grand views of the Annapurna Massif. The panoramic views at the base camp will make you forget that it took you 4-5 days to get there!

This moderately convenient trek is a small ask for reaching the base of one of the deadliest mountain expeditions in the world. The highest mountain of the massif [massif: a compact group of mountains], Annapurna I Main is the 10th highest peak (8091m) on our planet.

Although it was the first 8000m peak that was ever summited, it’s statistically the most dangerous mountain in the world with an insanely high fatality rate of 32%. 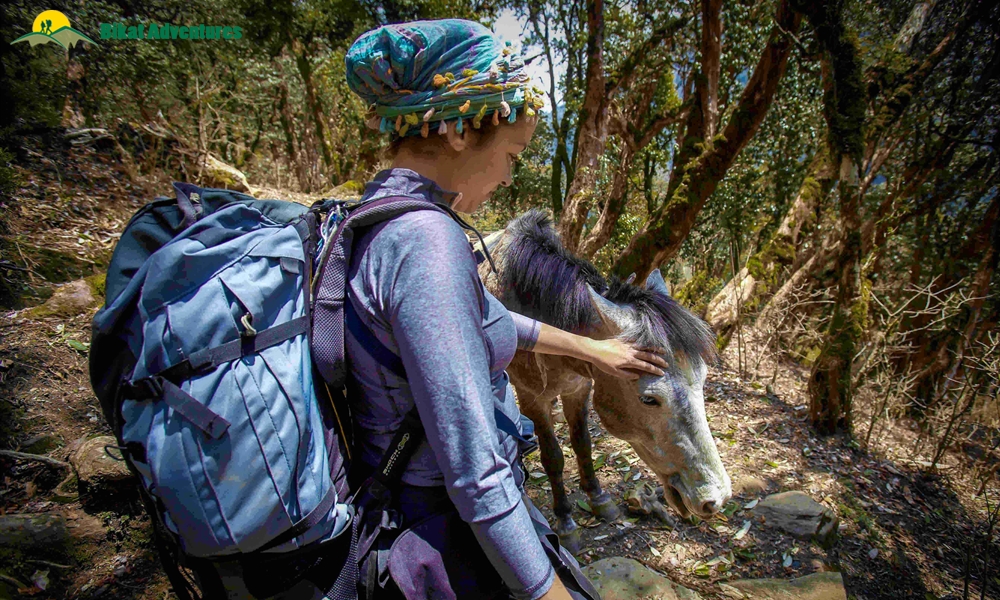 Beautiful moments that found us on the trail

Although the complete trail has its fair share of ascents & descents, it’s fairly manageable after due preparation and moderate effort. One could say it’s a simple way to practice the A-B-C of trekking (see what I did there?).

As mentioned before, the trek is not meant for absolute first timers but after attaining basic trekking experience (a couple of 3000m+ treks); the trail is an absolute delight. Without much weight on your shoulders (more on that in the next point), the trek is not very demanding but still yields a revered nod from your peers. Moreover, it’s a budget-friendly way to get an “international trek” under your belt.

3. Introduction to a Teahouse Trek 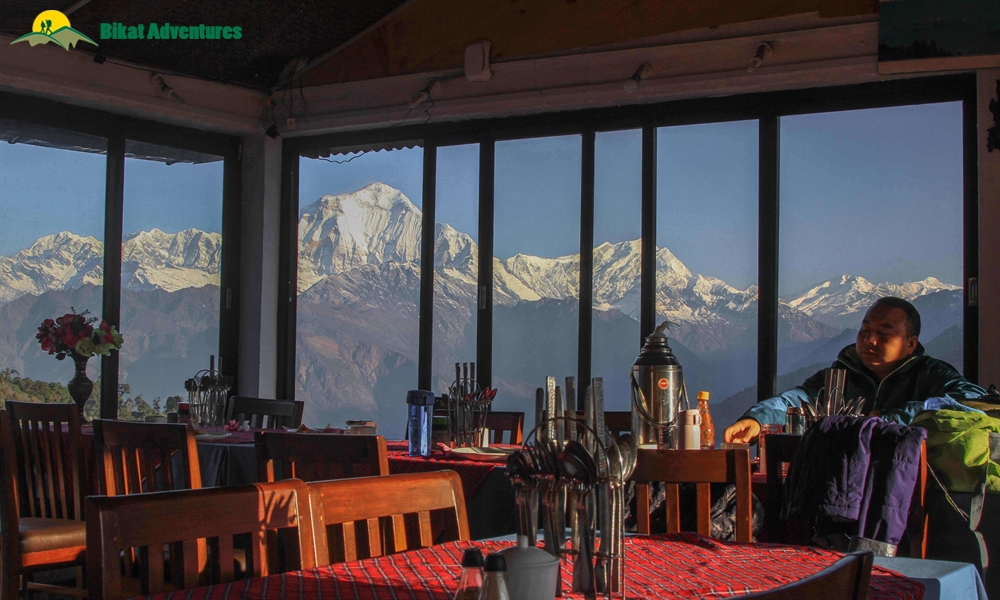 Breakfast of Champions - view from our lodge in Ghorepani

I wasn’t so sure what to expect when I heard the phrase Teahouse Trek. Now that I know better, I’ll try to explain - instead of pitching your tents at a campsite, you get to retire at a Lodge after the day’s hike. On the trail, there is a village after another at short distances, acting as pit-stops along the path. These villages, which are mostly clusters of small lodges, provide budget accommodation along with a surprisingly extensive food menu [don’t shy away from the local Dal-Bhaat].

It’s easier overcoming fatigue when you sleep on a cot instead of a sleeping mat; basic amenities like a bed, clean washrooms & electrical sockets make the overall experience quite distinct. Some people feel that these borderline luxuries take away from the very ethos of trekking, whereas for those who aren’t staunch believers, having a Wi-Fi connection in the middle of nowhere is like a blessing! 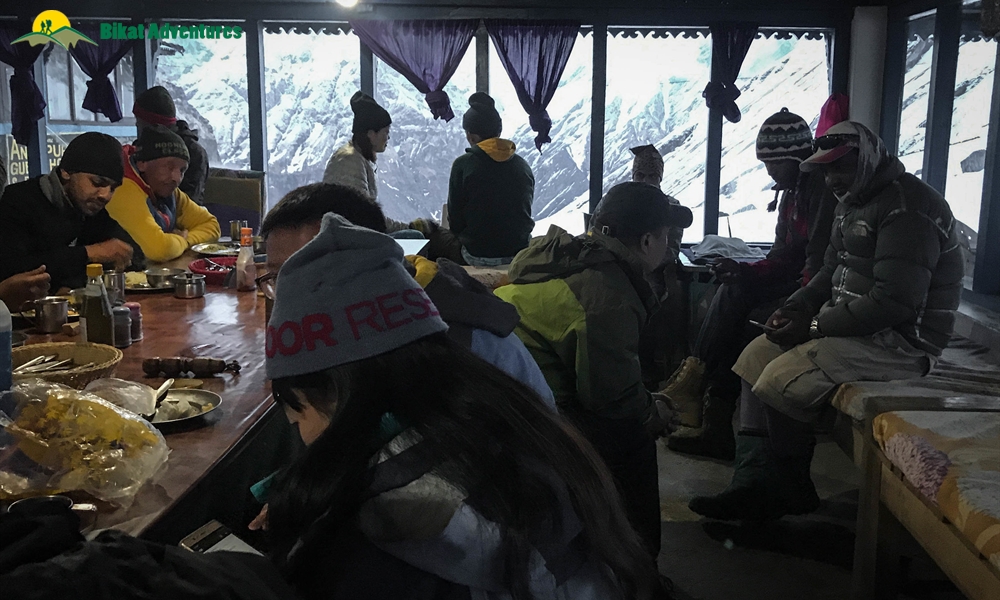 Nepal witnesses a heavy influx of tourism largely due to it being considered a coveted trekking destination by people all across the globe. Surprisingly, some people that I spoke with were amazed at finding out that India has high-altitude trekking as well! As a by-product of backpacker-friendly infrastructure, Annapurna Conservation Area has emerged as a trekking haven consisting of multiple trekking circuits suitable for a diverse range of trekkers.

Simply put, you get to interact with a lot of different people coming from different corners of the planet and they’re not necessarily following the same trail as you. That, blended with an intimate exposure to the local Nepali culture, presents an opportunity to learn a lot. The social return on investment is off the charts! 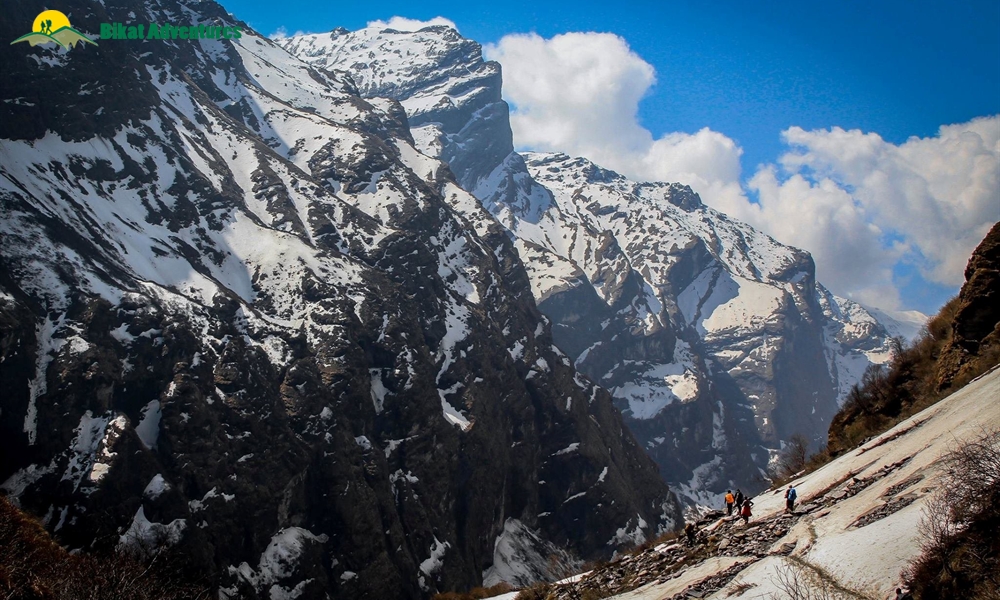 None of the above would have moved the needle if the trail wasn’t very scenic, but luckily for us, that’s not the case. The wildlife conservatory bestows an ever-changing array of landscapes for our eyes to feast upon. The initial days of the trek are spent on well-defined trails; striding through Rhododendron, Bamboo & Fern forests which occasionally open up to sections of terraced rice paddies.

Further up and you’re walking in between lofty rock walls (with multiple cascades) on one side and the Modi Khola gushing on the other. A few steep ascents later, you’ll find yourself wading through a pristine alpine terrain before you make it all the way to the Annapurna Base Camp [refer point 1 again]. Shutter-fingers, good luck keeping pace with the rest of your group! 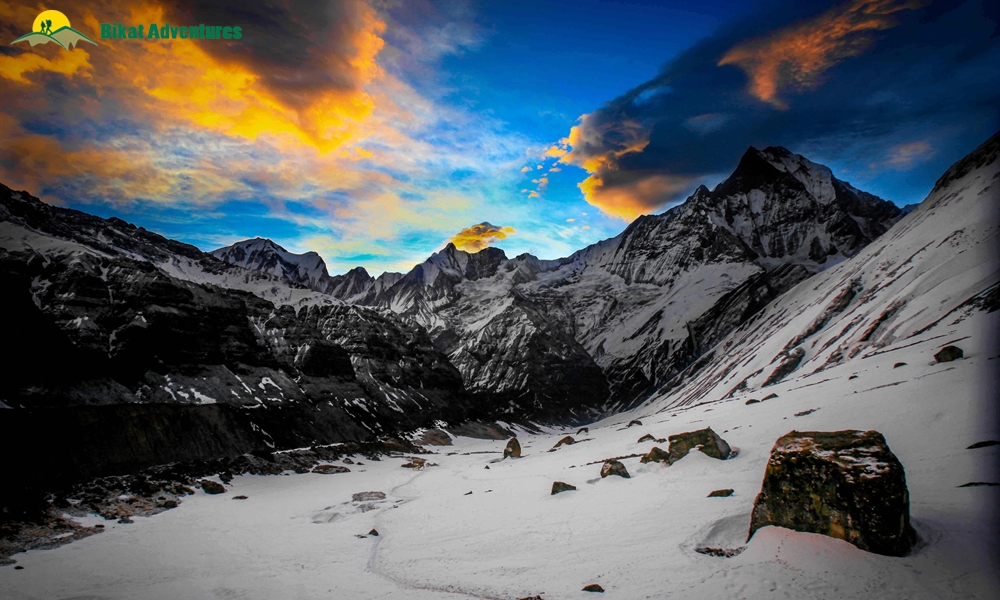 How about two base camps on one trail because that’s exactly what you’ll get on this trek. The last stop before you reach ABC is MBC [Machapuchare Base Camp]. Machapuchare is a distinguishable mountain with twin peaks, a feature due to which it is also known as Fish Tail Mountain. Because of the overall positioning and its unique towering peak, this imposing structure was more aesthetically appealing to me than any other mountain in the vicinity (Annapurna Massif included!)

In addition to everything else, you get to treat yourself at a hot water spring located near Jhinu, the last night-halt before the trek ends. Is it even possible to end a long trek on a better note than to soak yourself in a medicinal hot pool and rejuvenate your tired muscles? Never mind that, it’s a rhetorical question. 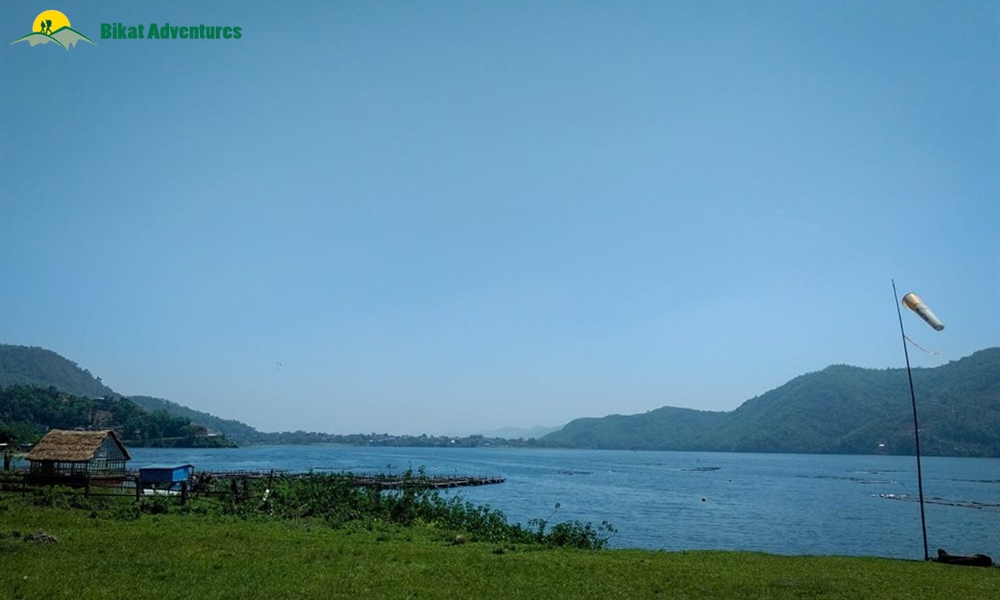 Why is Pokhara (the base for the trek) a legitimate reason you should consider enlisting for ABC? Simple; because it’s one of the best hill towns that I’ve ever been to.  Nestled in the Pokhara Valley, this tourist hub has something for everyone. In crude terms, the town is basically a 3KM long Mall Road running parallel to the Phewa Lake. For some, the splendid balcony views of the lake would suffice, for others, it may be the marketplace. The lakeside market offers whatever you need to have a good time – whether it’s the quintessential hippie vibe (Hip cafes & lively pubs to chill at) or pocket-friendly shopping (good quality trekking equipment, local handicrafts & antiques), that’s entirely upto you.

If you’re still looking for more, paragliding in Pokhara is considered grade-A bucket list material. You can also rent a kayak for as low as INR 250 per hour and set out to cover the length & breadth of the lake(best of luck!) 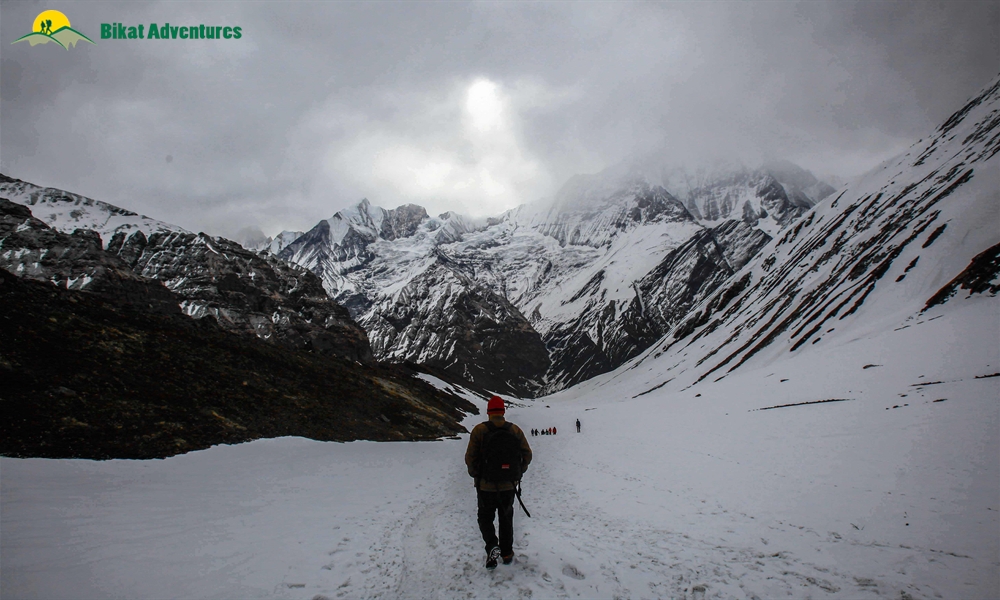 The descent back from ABC with intermittent snowfall

To sum up, this trek has something to offer to literally everybody! I hope this article has succeeded in acquainting you with the trek whilst also answering the question - how is the Annapurna Base Camp trek? For a complete guide to ABC, click here.

Feel free to put to test the seven reasons stated above and I hope that you come back with several additional reasons of your own as to why this trek is an absolute must!

Here are some supplementary facts to get you started: