Locally acclaimed as an ancient Hindu pilgrimage route, Dodital-Darwa Pass trail is a perfect detox for trekkers and mountain enthusiasts who long for escapades into far wilderness in a short span of 5 days! The trek transports you from the hustle bustle of your city life into a land so beautiful, you leave behind all your blues to soak in the beauty that surrounds you.

While the trail has so much to offer, the diverse shifts in views on this trail across its 40 km distance are itself a major highlight on this awesome adventure. We just can’t get enough of this!

Here, in this article, we bring to you the day to day highlights of Dodital Darwa Pass trek situated in the vales of Uttarkashi. 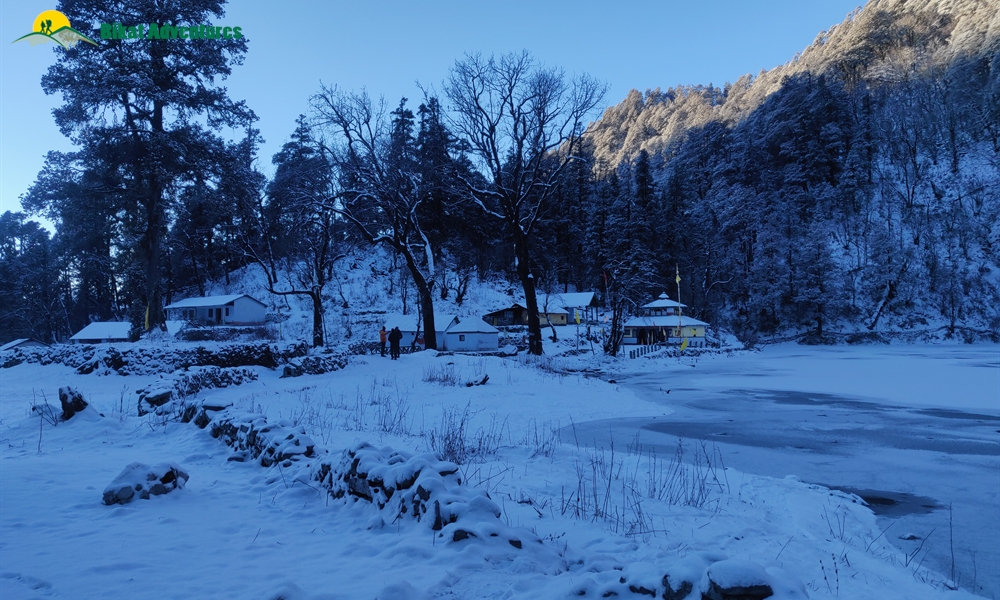 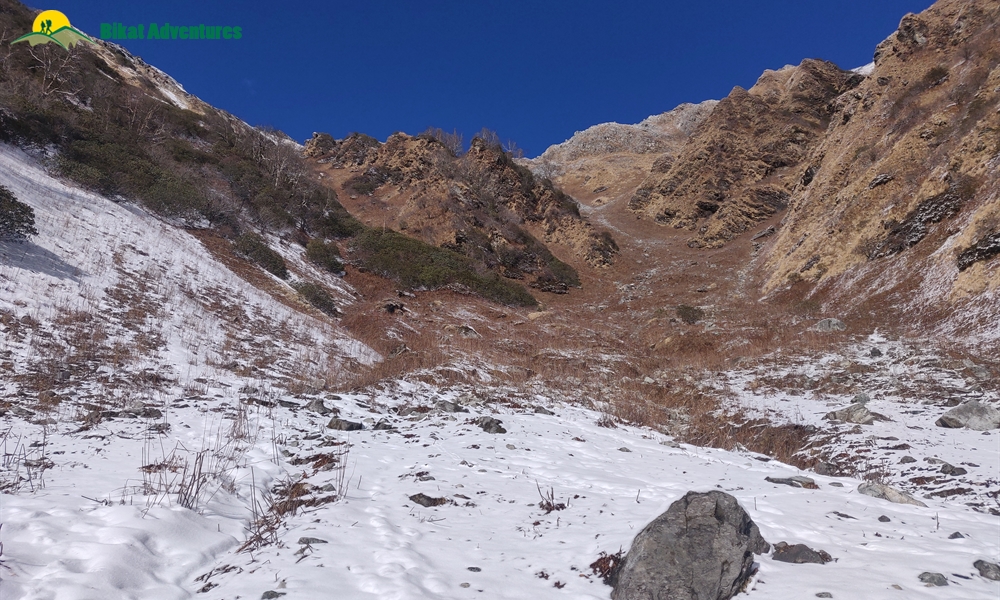 Highlight 1: The Village of Agoda and its Surroundings

Agoda is the basecamp village of Dodital Darwa Pass trek. The beautiful village nestled amongst the Garhwal Himalayas is a gateway into cavernous forests in the district. The village is laden with picturesque oak trees, locally known as ‘Baanj’ along with the Agora Pine (also known commonly as Chir Pine) of the Assi Ganga Valley.

Agoda is home to medieval houses with intricate wooden carvings that showcase craftsmanship and an eye for detail of the locals. As we spend time strolling in the village, we notice that it is an overload of culture and nature, with ample spots to get panoramic views of the sun setting over the mountains.

The region is also a birder’s paradise in springs. Tufted duck, Gadwall, Partridges, Himalayan Monal and Red Junglefowl can be seen around the village during summertime. In winters, major birds move towards warmer valleys while little sparrows and ravens can be seen here all the way up till Dodital Lake. 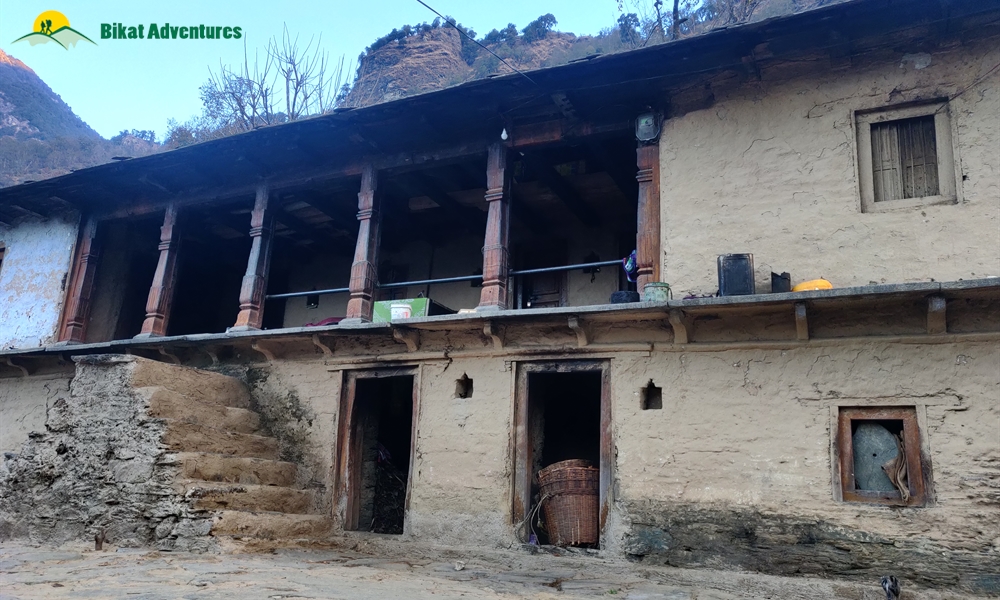 Hightlight 2: The Thrilling Route to Bhebra

The trail from Agoda to Bhebra starts with an ascent that leads to a vertical rock face. The trail leading into the dense forests with deodar, pine, kharsu and moru oak treeline is very defined with steps laid for trekker. The forest immediately transports you into a world of wilderness with the scent of the trees and the sun peeping through the canopy. One can spot locals collecting dry leaves for livestock fodder in the area and they are more than willing to sit down with you for a quick chat if you are up for it!

Streams from Dodital accumulate into a big, emerald freshwater pond just before Bhebra. A fallen wood log and boulder crossing over this water body leads us to the village homestays and shielings of a lively Bhebra village, making the trail an exciting one with so much to see and experience. 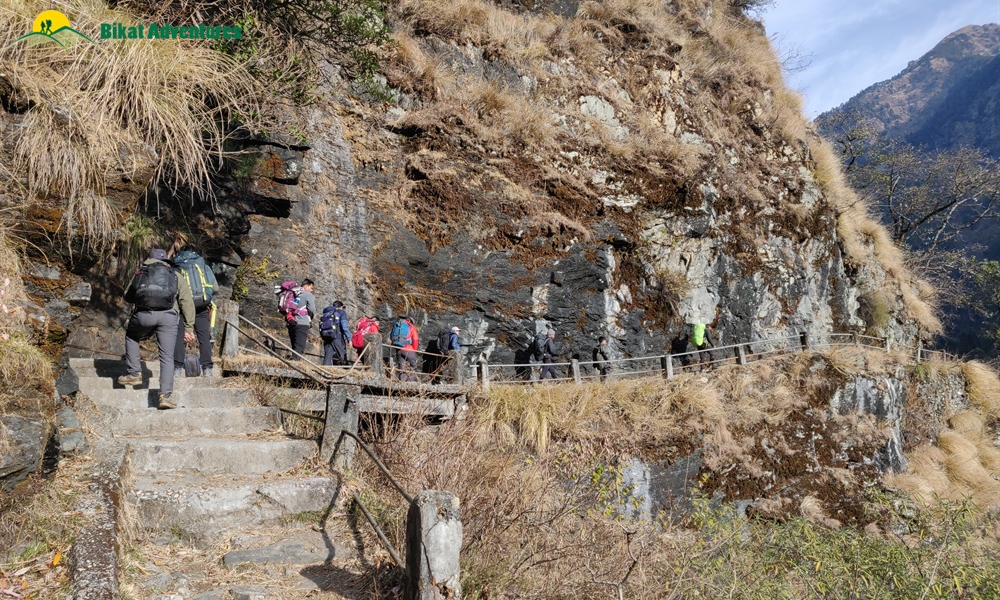 Highlight 3: The Adventure Packed Ascent to the Shielings of Manjhi

On crossing Bhebra, the trail diverges into a steeper route. This route laden with big rocks and dry grassy patches opens up to Manjhi shielings. Although steep, the trail is full of fun and adventure and can be completed comfortably. This route is bound to give you that adrenaline rush that we all seek in trek!

Manjhi is an open ground with makeshift structures of oak and rhododendron which make for a scenic view - a quintessential lunchtime spot in its offering. 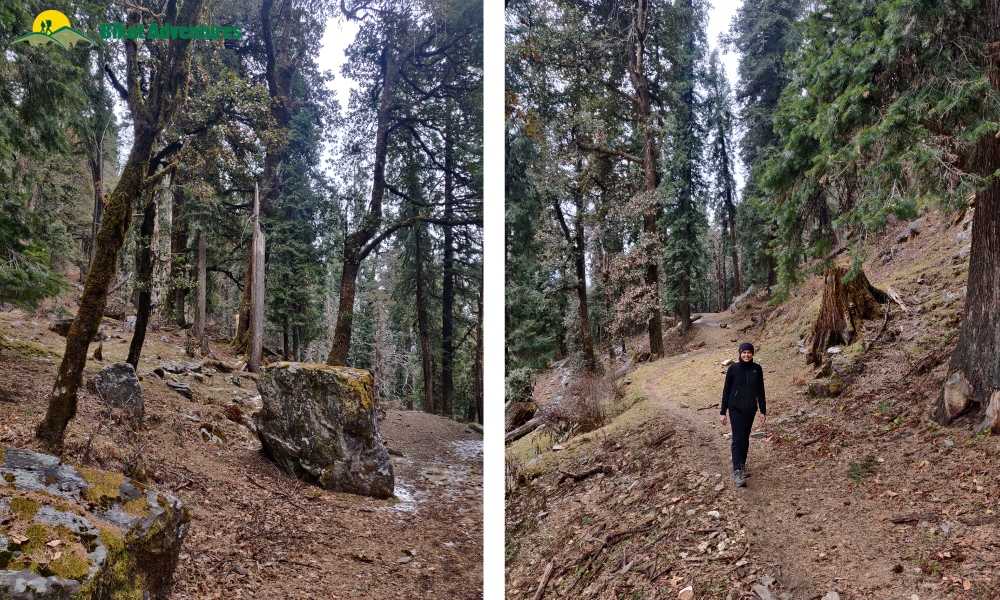 Dodital Lake in all its eminence is a spot that embodies spirituality and adventure. With gorgeous views of golden oak trees lined up in its surrounding mountains, the emerald green Dodital lake gets covered with frozen ice sheets early on in winters. At an altitude of 3,024M, the lake is also an aquatic biodiversity hotspot. The Himalayan golden trout are found aplenty in these freshwaters along with the rare rainbow trout. Other species of cold water fish one can find here include snow trout, mirror carp, common carp and brown trout.

Lord Ganesha temple on its left is a colourful sight of reverence. Based on Hindu mythology, it is believed that Dodital is the birthplace of Lord Ganesha. 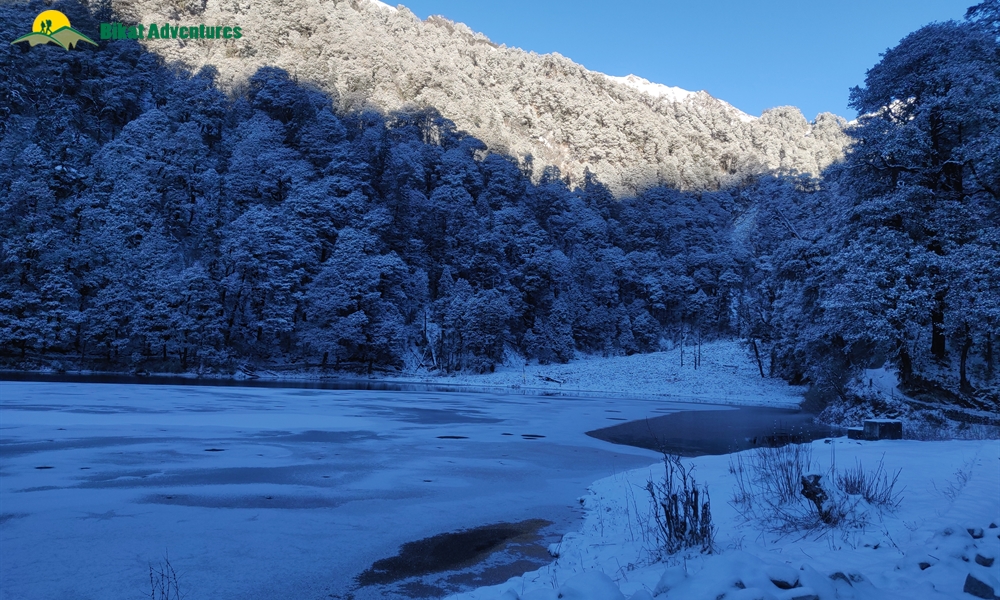 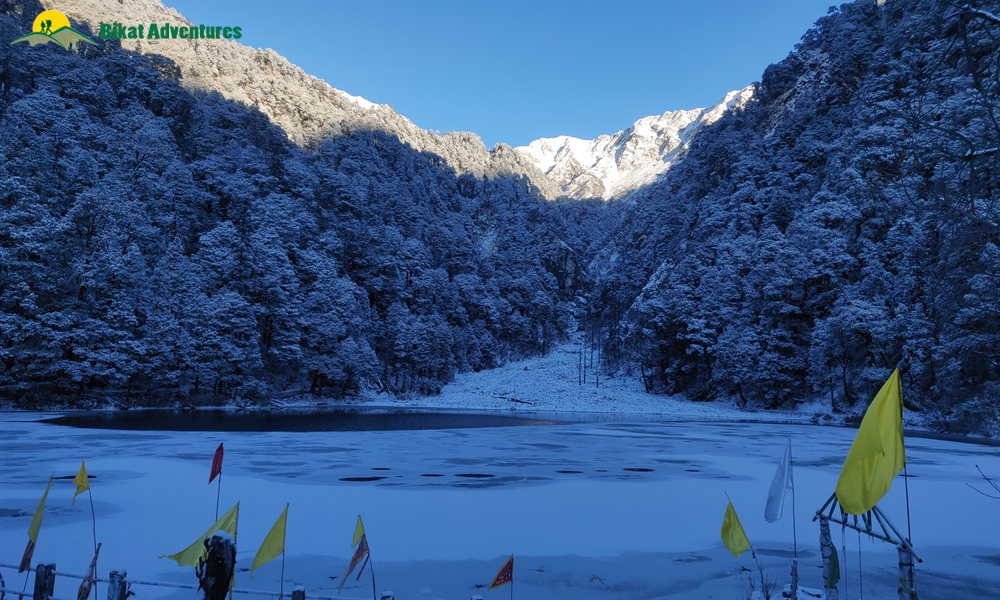 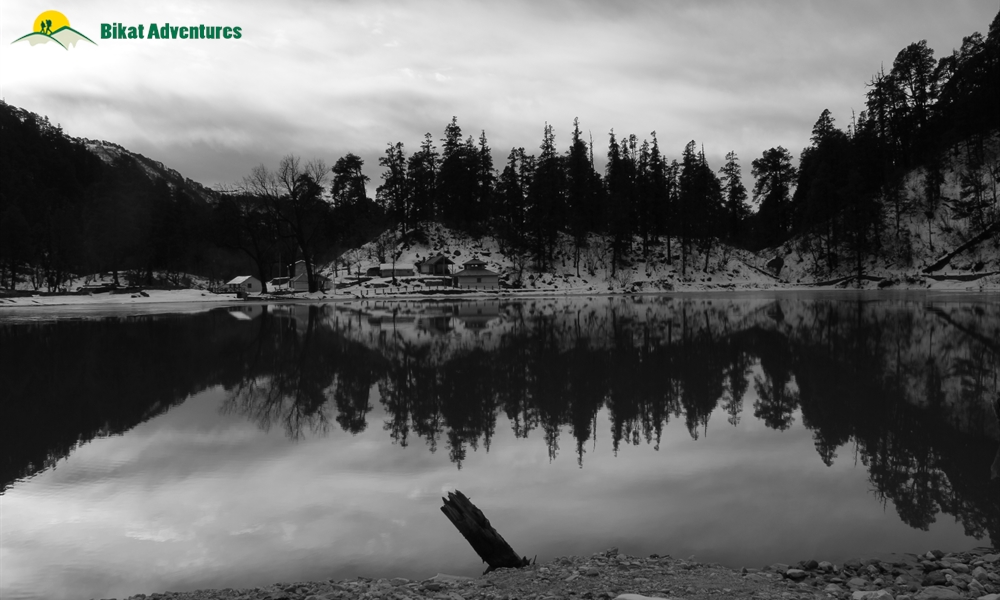 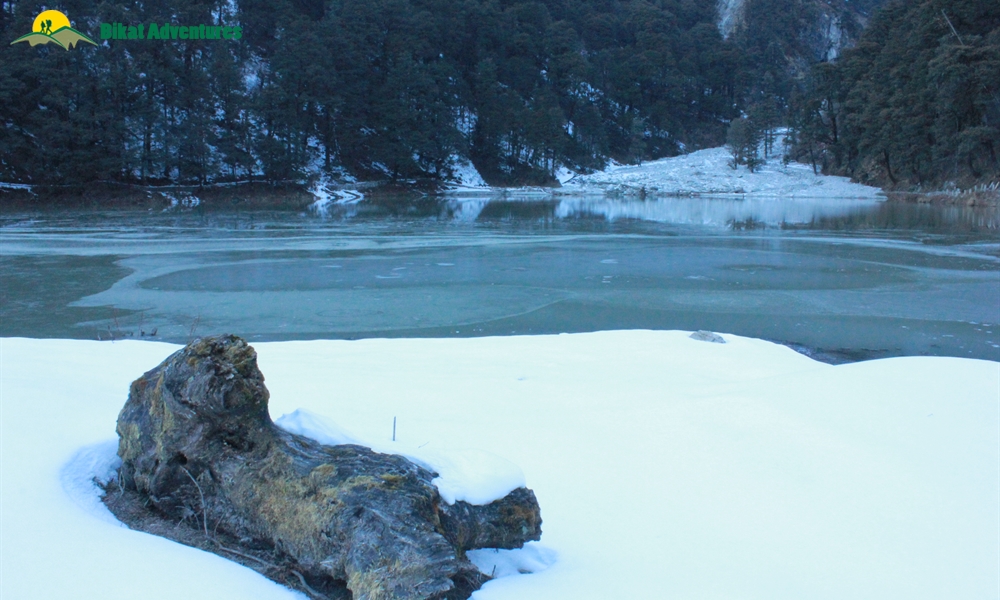 Highlight 5: Darwa Pass and Water Bodies Along the Way

The trail leading to Darwa Pass is beautifully decorated with bubbling ponds, streams and rivulets. Fresh snow melting from the Pass seeps through the dry foliage into these verdant green water bodies that finally merge into Dodital.

An elevation gain of 1,127M in a short span with rough terrains on its route make Darwa Pass a difficult tread. Promising views of greater Garhwal ranges start sprouting post the end of the tree line on the trail.

The views from snow laden Darwa pass in winters is the highlight of this day on the trek. Black Peak, Mt Bandarpoonch, Mt. Deoli on one side and enticing visuals of Hanuman Ganga Valley towards Yamunotri on the other side, sure are a sight to watch out for! These panoramic views of the Garhwal ranges will leave you spellbound to say the least. 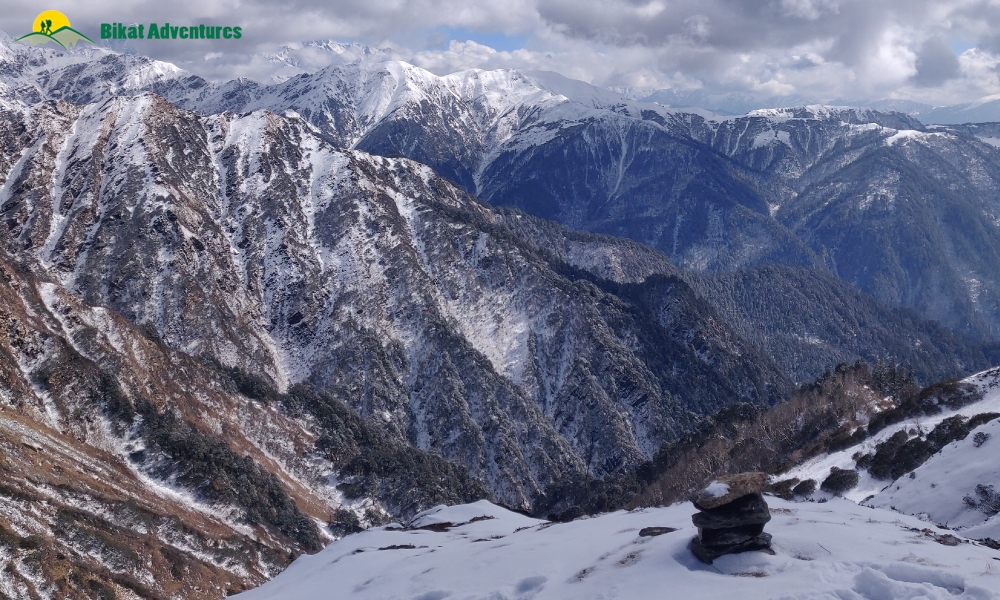 As we trace our steps back from Dodital Lake to our Agoda, our basecamp village, the forested trail offers spellbinding views, oak shades and breezy winds on the way. We soak in the beauty around one last time before we brace ourselves for magnificent sunsets that can be seen from Agoda.

As we make our way  down to the village, we get to watch the sun setting over the Himalayas, resulting in enchanting colours that appear during the afterglow. We enjoy this view with some lip smacking snacks and eagerly await our next trip to the mountains. 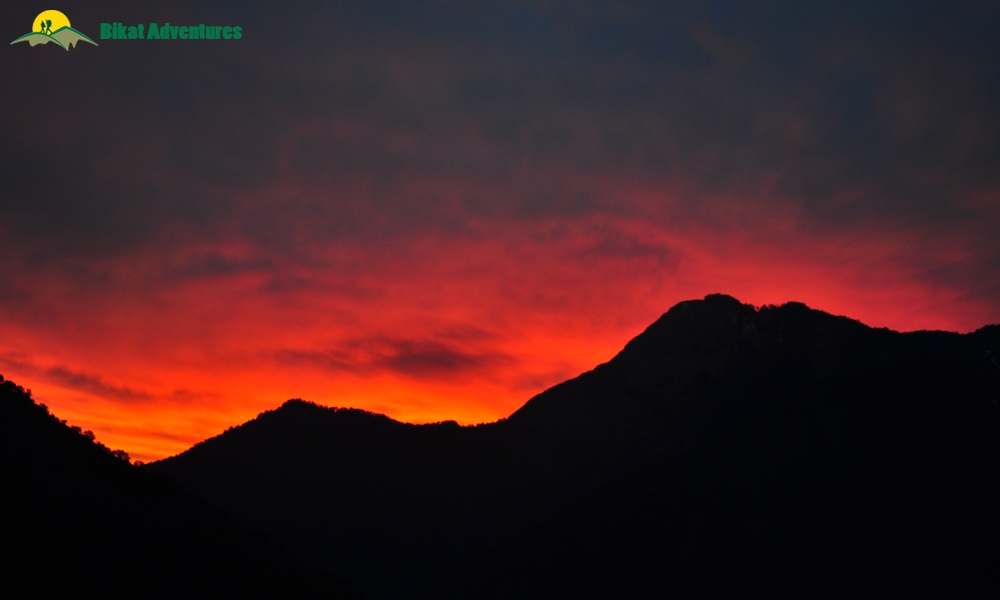 Tranquil morning scenes at Agoda village are visible right from dawn. The changing hues of sun from pink to a tinge of red and then the sweet winter sunshine are a perfect culmination of Dodital-Darwa Pass trek. 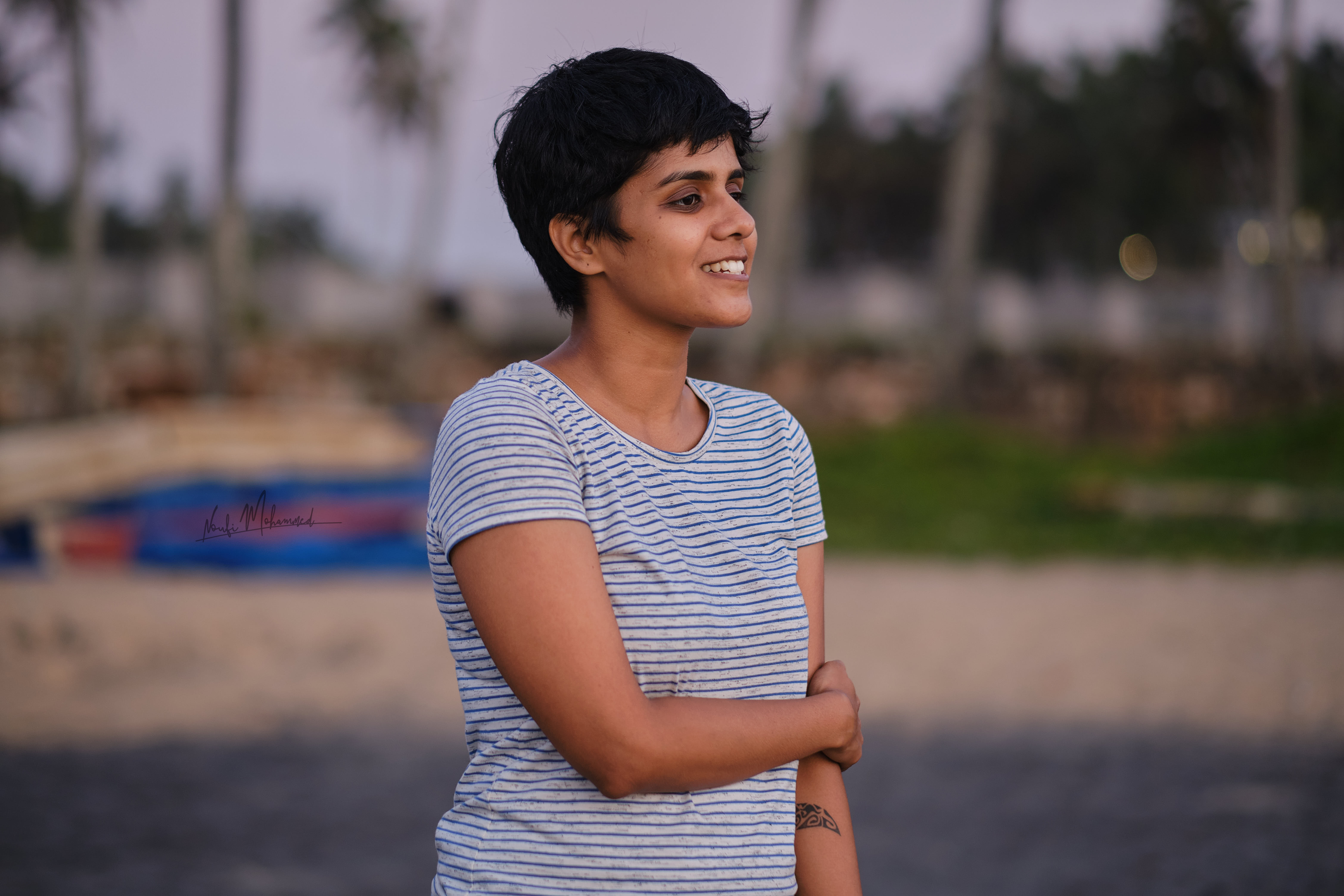 Lawyer by education, Geethanjali loves travelling and documenting her travels through photographs an Read more