This section is defined by Baralacha La. It is not just one of the highest passes in the world but also the most beautiful one. Expanse of the Bhaga river, High Altitude camping, Suraj Taal (@4268 mts), the widely spaced loops of Baralacha are some of the highlights of this stretch. If you want to plan a short, 3-day, but exciting cycling trip, then just drive down to Sissu / Koksar, start biking from here and end your trip at Bharatpur which comes after crossing Baralacha La. From here you can either drive back to Manali by the same route or drive to Shimla by the Lahaul / Spiti route.

Day 3 : Sissu to Jispa (54 kms), Ride through the love story town of Tandi and rest at Bhaga’s expanse

Morning was very pretty in Sissu, the sun trying to overcome the mountain cover, slight breeze blowing across the valley and partly cloudy weather. Priya, as usual, woke up first followed by me & others. She started first, followed by others. Initial stretch of the day was flat (easy ride) till Gondhla from where there is a nice descent till Tandi. Road construction is a never ending process here and one can see workers from eastern part of the country every now & then. While we were riding fast on the descent a dog raced along with me for a good 1 - 1.5 Km stretch as if trying to cheer us up for the road ahead.. 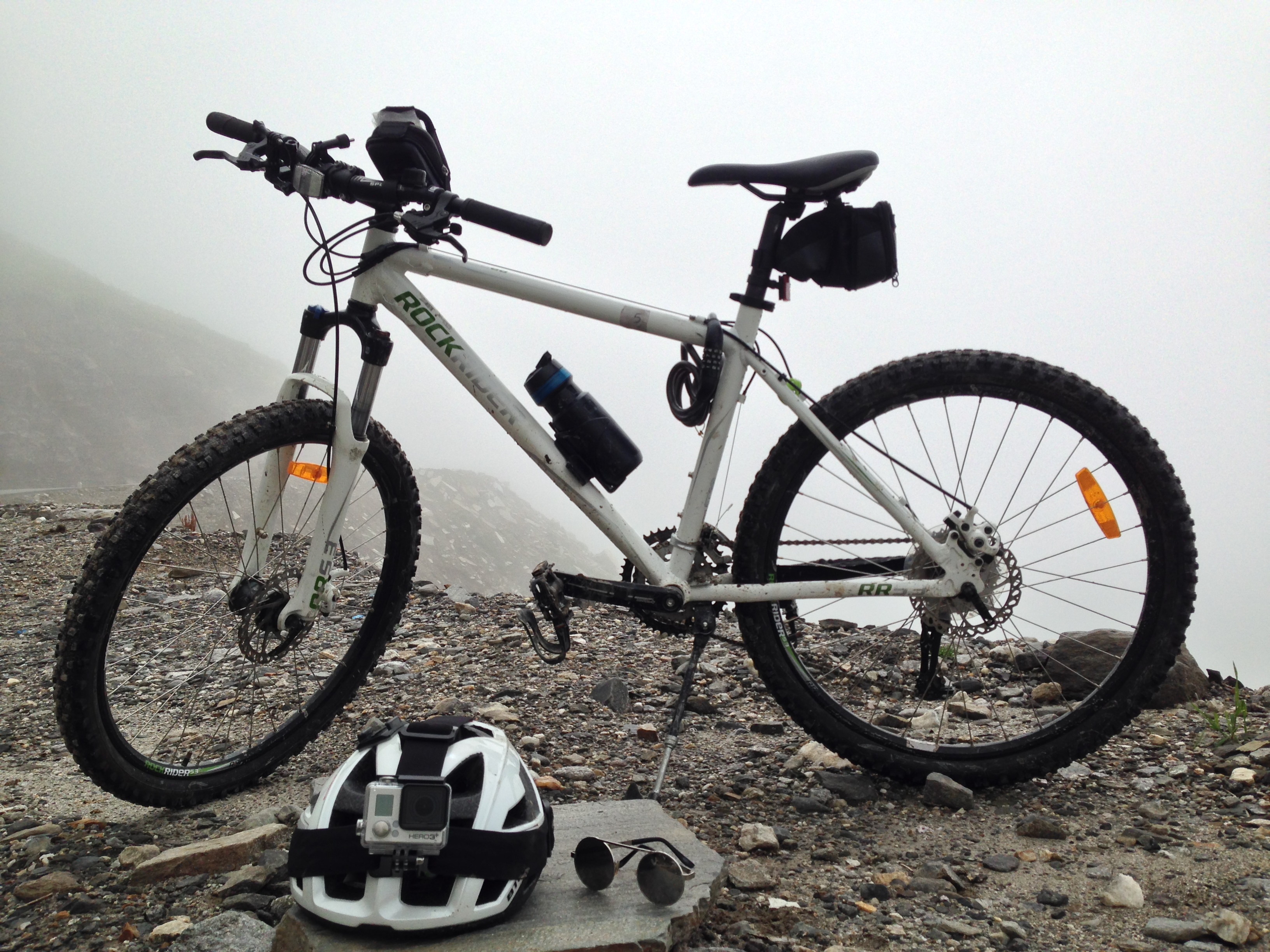 One of the bikes enjoying the view from the cliff

Soon we were at Tandi bridge where ‘Chandra’ and ‘Bhaga’ rivers meet. The confluence makes Chandrabhaga river that turns into Chenab later in J&K. The story goes that there were two lovers, Chandra (Moon’s daughter) and Bhaga (Sun’s son) who climbed all the way to Baralacha La for their wedding. The bet was that they would run in different directions and wherever they can possibly meet next would be the place of marriage. Chandra ran South East, and Bhaga towards north west. They met here at Tandi and got married! 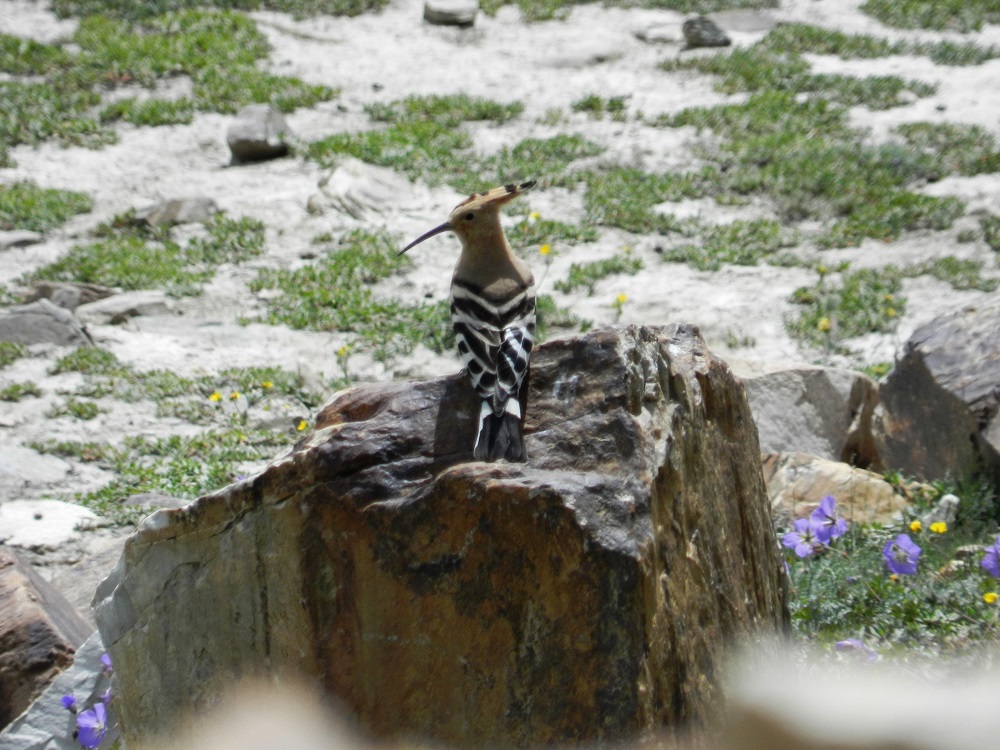 A woodpecker spotted on the way

This day in terms of effort actually starts at Tandi from where a gradual climb starts till Keylong @ 3080 mts (7 Kms). We all re-assembled for pictures, some biscuits, and chocolates. I took a small detour into the town to take some bread and rest everyone continued on the highway.

From Keylong we kept paddling up till Stingri and further towards Gumri. On the way, Sreeram chose a nice spot for us to have the lunch. Parathas were dry but hunger was bugger  With renewed energy after lunch, we continued the ride to Jispa @ 3200 mts. We reached Jispa pretty early (around 2 pm), we took our bikes close to the Bhaga river. 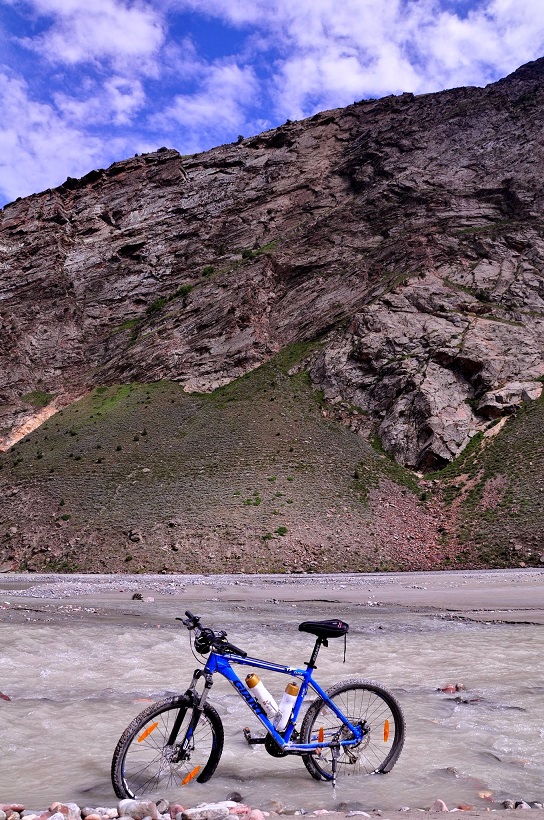 The water was muddy but the expanse of Bhaga river with big mountains on each side was a soothing sight for the eyes. We took out our dining tent today for the first time. The tent was big, warm, and comfortable for all 8 of us. Playing cards, tea, soup, conversations, photos…fun was the order of the evening. 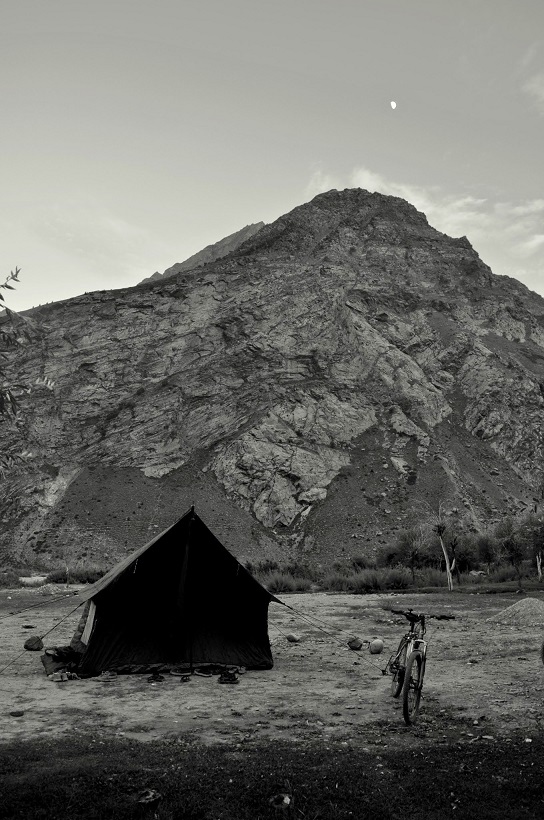 One of our camp at the Bhaga river

The day started at normal time with awesome view of a bright sunny valley. Initial stretch of the day was flat ( When I say flat, I am ignoring the little up-down in the landscape & I am clarifying so that my fellow riders don’t kill me  ). It continued like this till Darcha. We reached Darcha quite early from where the climb started till Patseo @ 3751 mts ( 15 Kms ). The climb was not so easy but all of us were paddling up quite fast today. 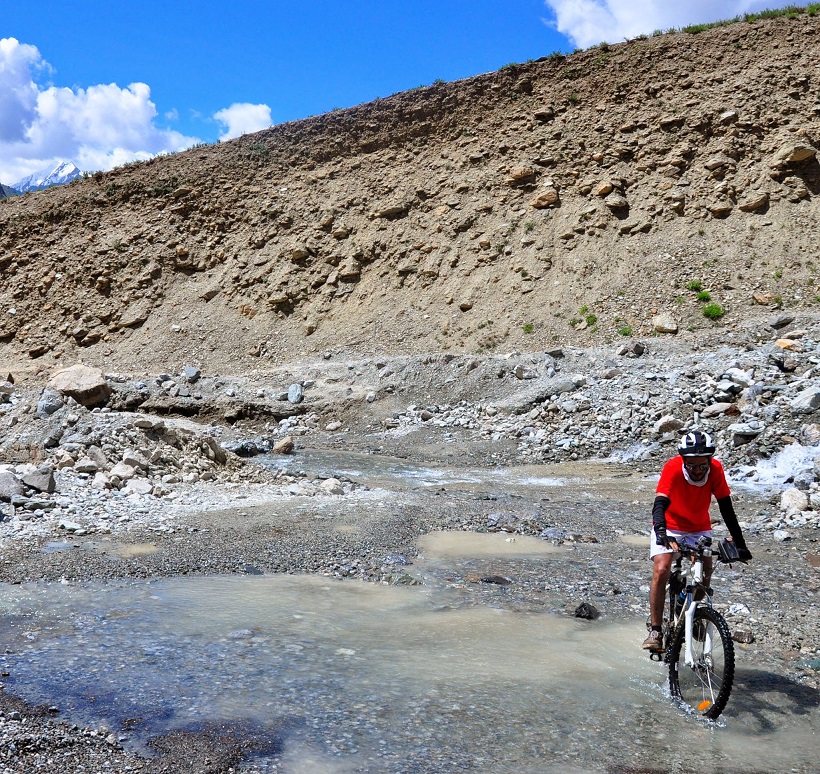 Soon we reached Patseo and had our lunch. Some locals said Patseo means ‘one-big stone bridge’. Can’t say how true that is .. but sometimes these anecdotes are nice to believe. Just before we reached Patseo, there was a small fresh water lake with breathtaking view of layers of mountains (arranged as if an amphitheater) behind. 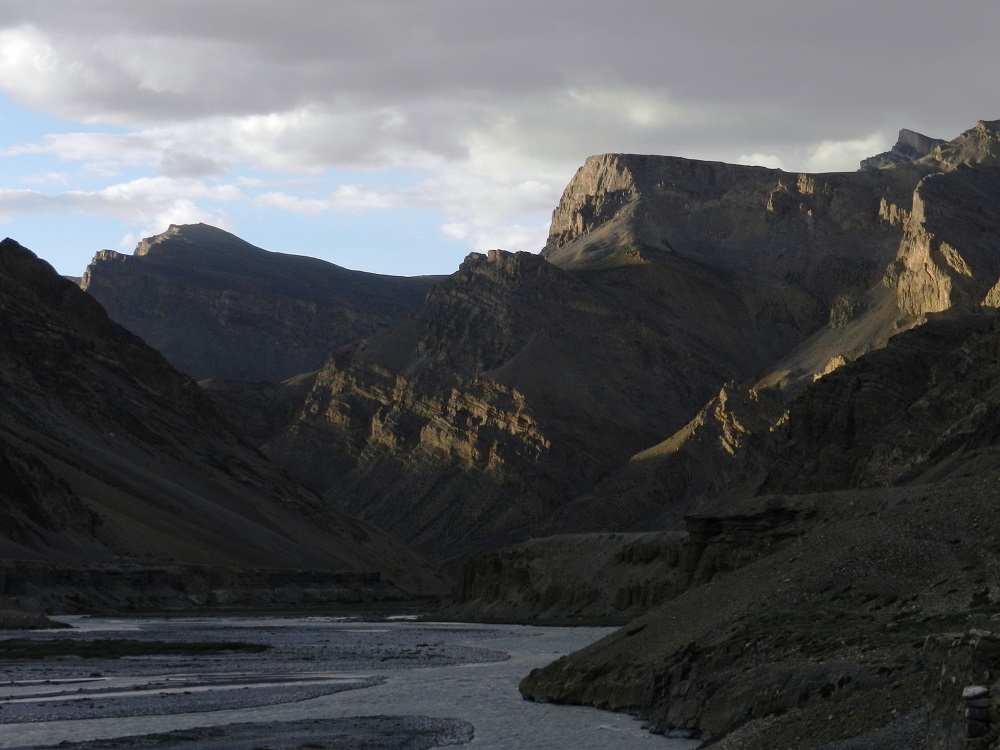 The anonymous lake…at elast I don’t know the name 

From Patseo, we had to climb another 14 Kms to Zing Zing bar. This was a bit difficult mostly because of the continuos incline, intense sunlight, and cold winds. Long breaks must be avoided on such climbs but keep yourself hydrated on such climbs to keep the muscles warm and avoid cramps. We reached the Zing Zing bar @ 4270 Kms by 16:15 hours. There are two Zing Zing bars here, around 3-4 kms apart. We camped at the higher one. 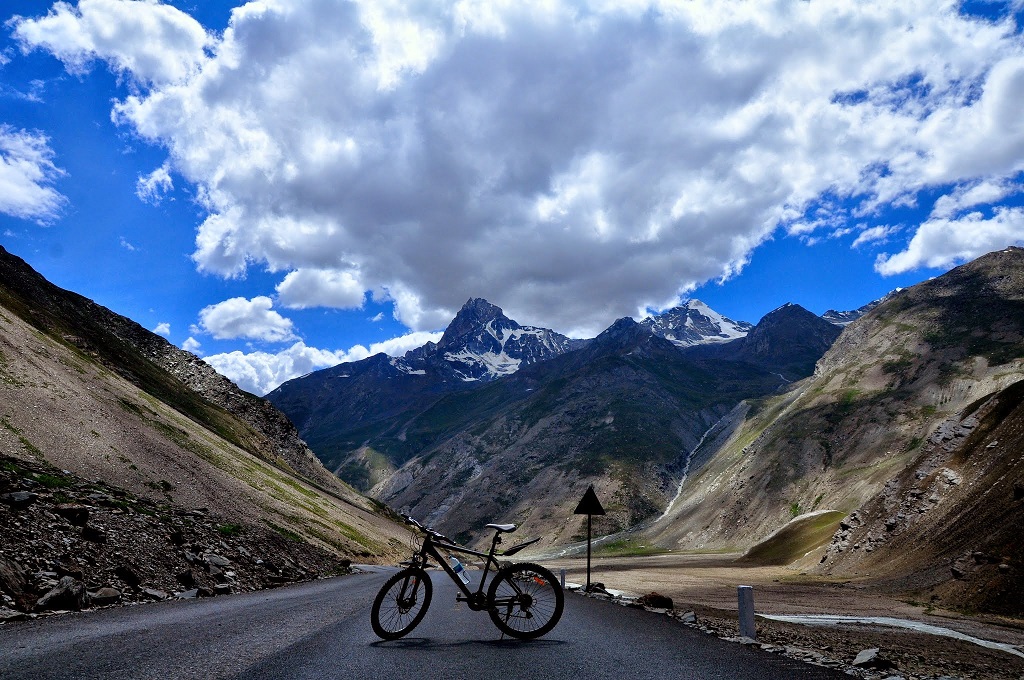 Another thing that no-one should do at such high altitudes is break down immediately after reaching your milestone. We had only climbed up & gained altitude all through the day. Some of us were getting headache because of the altitude already. We made sure that everyone was properly hydrated with loads of water, glucose, tea, etc. We also did a small walk upwards to gain some more altitude & came back to lose the same. This makes your body acclimatize better and should be practiced in any high altitude camping site.

Evening was enjoyable again playing cards ( courtesy Prem bhai ..), Teen Patti to be specific  The sleep tonight wasn’t that great for all of us because of the altitude but after some medicines, it was OK.

Most of us had slept uneasy last night, so I did not wake anyone up early today. The morning started at around 07:30 hours compared to the 06:00 hours we were used to.. We had some other cyclists camping at the same site. They were 2 guys, each of the age around 60+ who had completed the Manali-Leh stretch many times before. Inspiration! 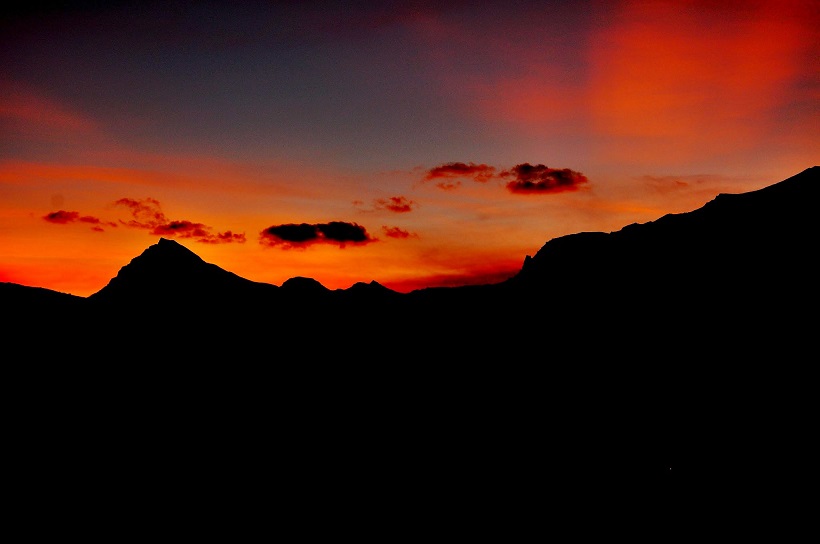 We started at around 08:00 hours and everyone had just one thought in the mind – Baralacha La @5030 mts . As we started, I tried to calculate the distance of the top going by the last milestone we saw saying – Baralacha La – 32 Kms @ Zing Zing bar. So, the estimate was 26-27 Kms. Weather was cloudy today, so most of us were riding with a rain coat on. The curves for this ascend are uniform that lets you maintain a nice momentum. Sreeram & Rohit were ahead and Priya & Wakeel were behind, while me, Ramu, Yasho & Kush were riding together. We thought of taking a short cut in between, Go-Pro was switched on, and completed a fast ride up. Nice rush of blood! Soon we reached Suraj Taal @ 4883 mts. 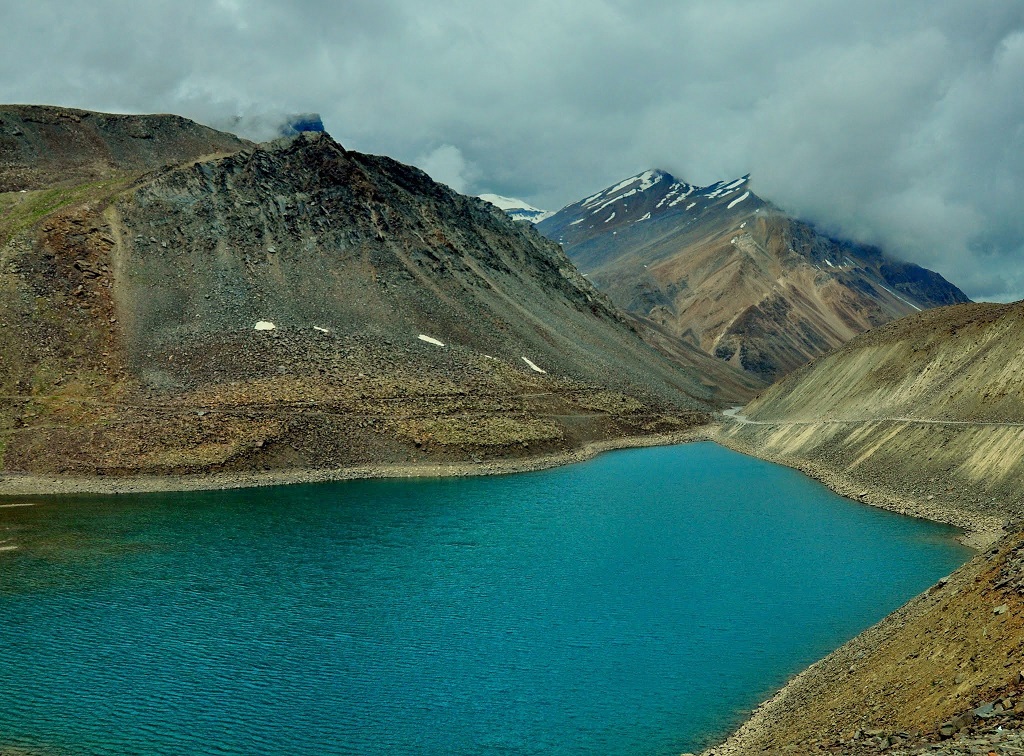 The winds were quite cold and we took out the jackets here. After climbing a few more loops, I saw the broken sheds where I had taken an ‘Anjeer break’ when I did this route last time around with my friend Sushant ( popularly known as tau ) . I remembered that Me & Tau did not take much time from here to reach the pass but my calculations from the morning were suggesting that we still had a long way to go. 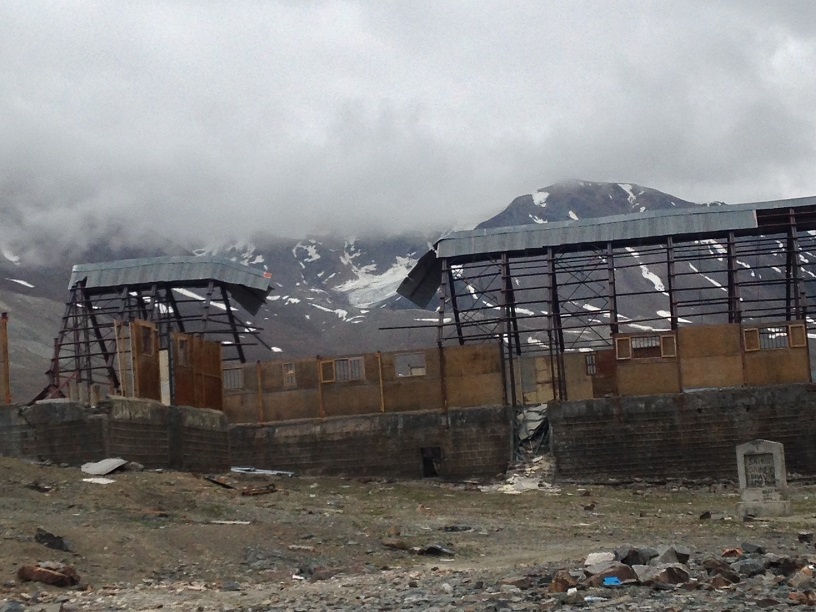 After climbing for some while, we actually reached the top that was a pleasant surprise for most of us, proving my calculations wrong! But Sreeram had already moved further ahead thinking that the top is still ahead. I can now say that Baralacha Top is only 15 Kms from Zing Zing bar (upper one). Expedition banner was out for the awesome pass, the Bralacha @ 5030 mts that gives a wide open view in front with snow laden peaks staring into our eyes.

Descent was fast to Bharatpur where Sreeram was waiting for us for a long time. We had lunch here. From Bharatpur to Sarchu @ 4290 mts, the road is mostly flat with many stretches going down. I was riding alone when I reached Sarchu with most people behind at some distance. Green pastures, flat surface in the middle of huge mountain peaks, and Yoksar Nalla @4100 mts flowing along. To me this patch beats the Koksar -Sissu road. I waited here for others. 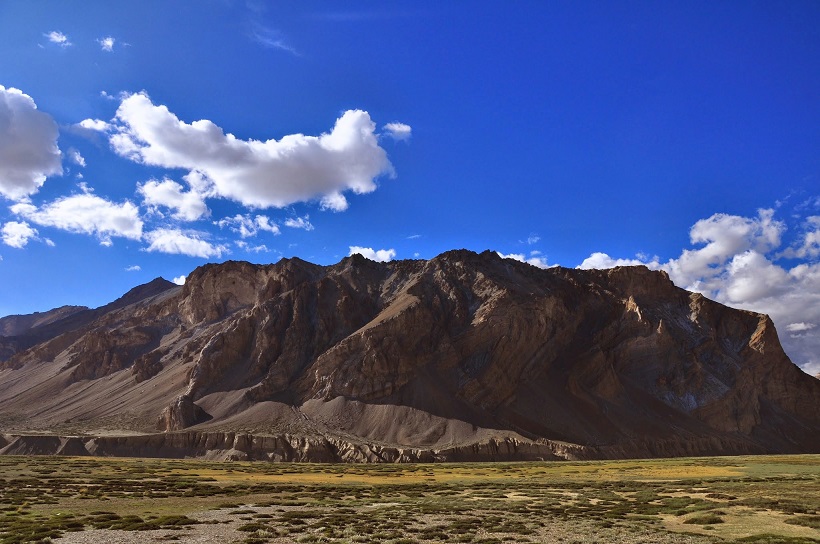 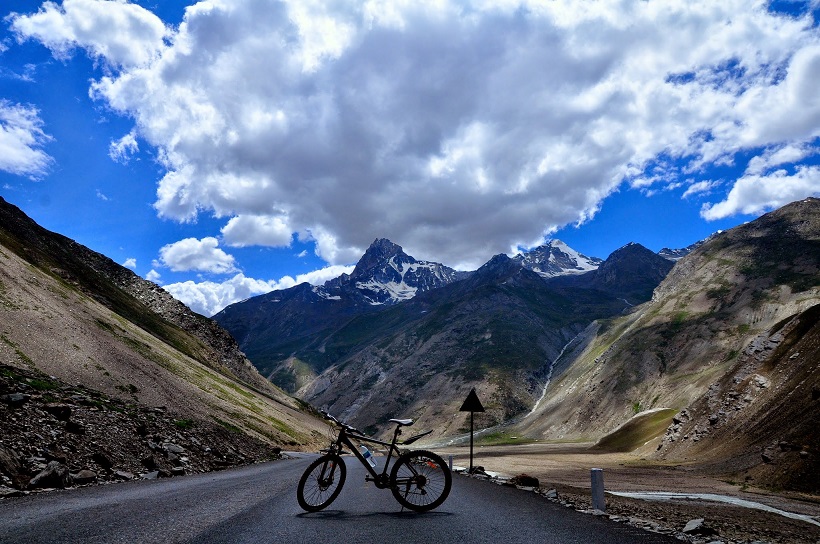 The target of the day was Brandy Nallah @4120 mts (20 Kms) from here and it was already 16:30 hours. I pushed everyone to ride ahead without wasting much time at Sarchu., I rode fast to reach the camping site where nothing was visible. After 45 mins of searching here and there, I found the camping site behind the broken structures close to Brandy Nallah. 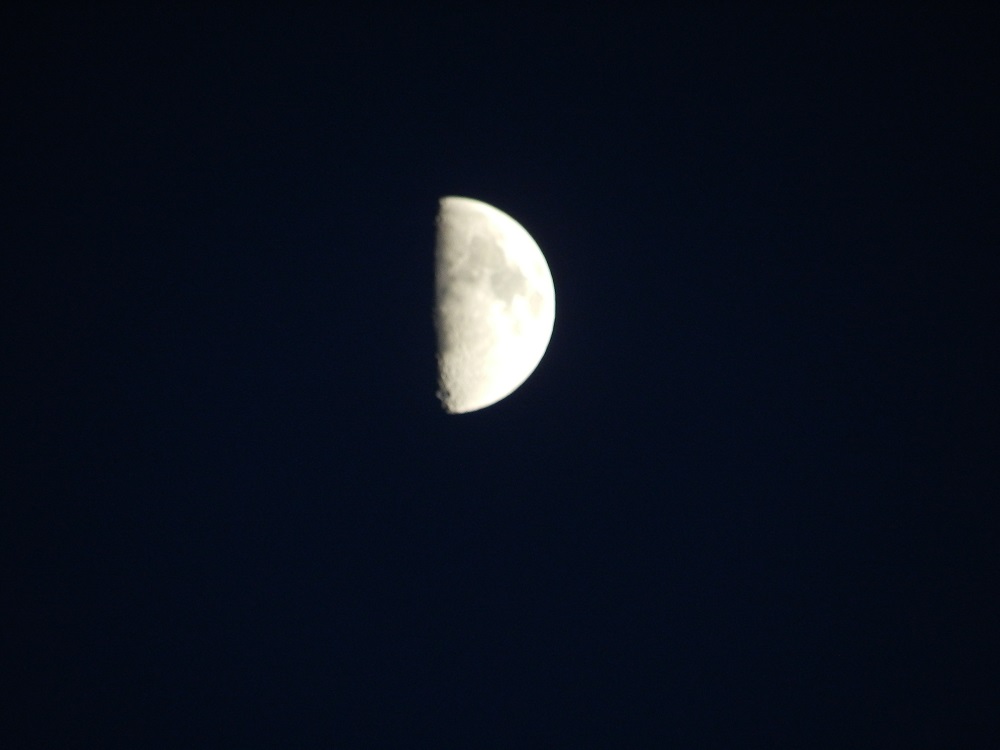 The Moon glow for Yoksar Nallah!

Tents were put up quickly; Kush played some music that at least I could not understand  Night was quite beautiful with moonlight making the water of Yoksar glow in the dark and all the mountains trying to capture as much moon as possible.

Covid-19 Pandemic: How to indulge your wanderlust this quarantine?

Things To Know Before You Take Up Skiing

Covid-19 in India: The Mountains are calling, Should I go?