I had reached one day before in Manali for Beas Kund Trek as one should since traffic jams in Manali is a big bummer for your trek if you don’t reach on time.

Excited about my trek, I was bombarding my trek leader, Vikas, with lots of questions. What all am I gonna see? How beautiful is the lake? How difficult is the trail? Is there anything interesting I should look forward too?

He laughed at my misery and impatience. He asked me to calm down and wait till the next day for the trek to start.

I was helpless. But just so you won't be as helpless as I was, I have gathered everything that got me excited about the Beas Kund Trek and that you should too look forward to.

I vividly remember Vikas saying to me “One is fortunate to be at such a place as Bakar Thach.”

I thought he was exaggerating at that time. It was when I set my foot in our camp at Bakar Thach, I realized why he said what he said.

In every direction I looked, there were magnificent views all around. The soaring peaks, fifty different hues of green, and the clouds wrapping us around.

Say any adjective you would like to describe the charm of the place. Mine is Stupendous! 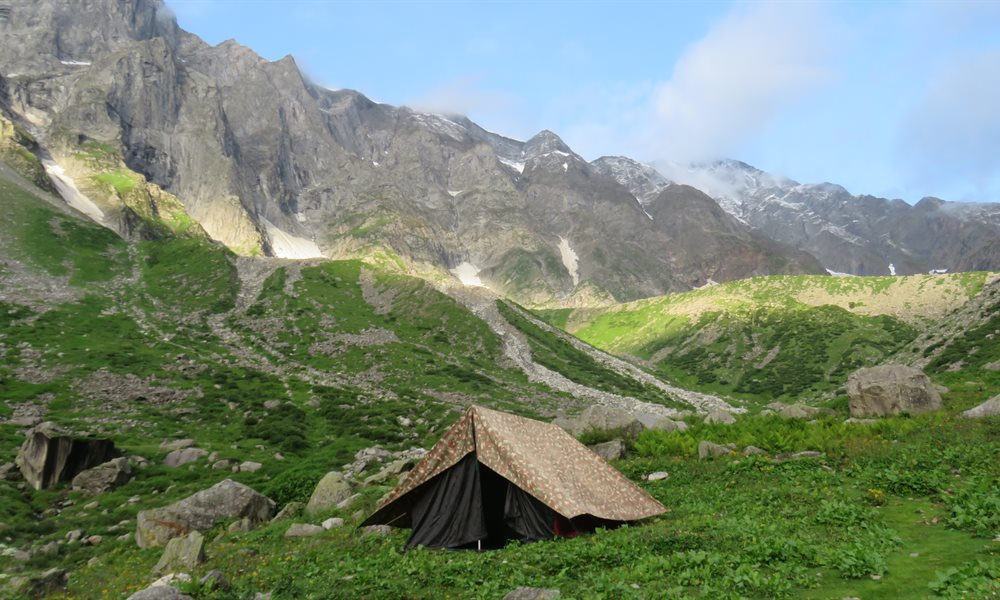 Standing in the middle of Bakar Thach feels like you are standing in a spotlight. There are so many peaks visible on Beas Kund Trek. You are surrounded 360 degrees by notable peaks like Hanuman Tibba, Friendship Peak, Shitidhar, and more. 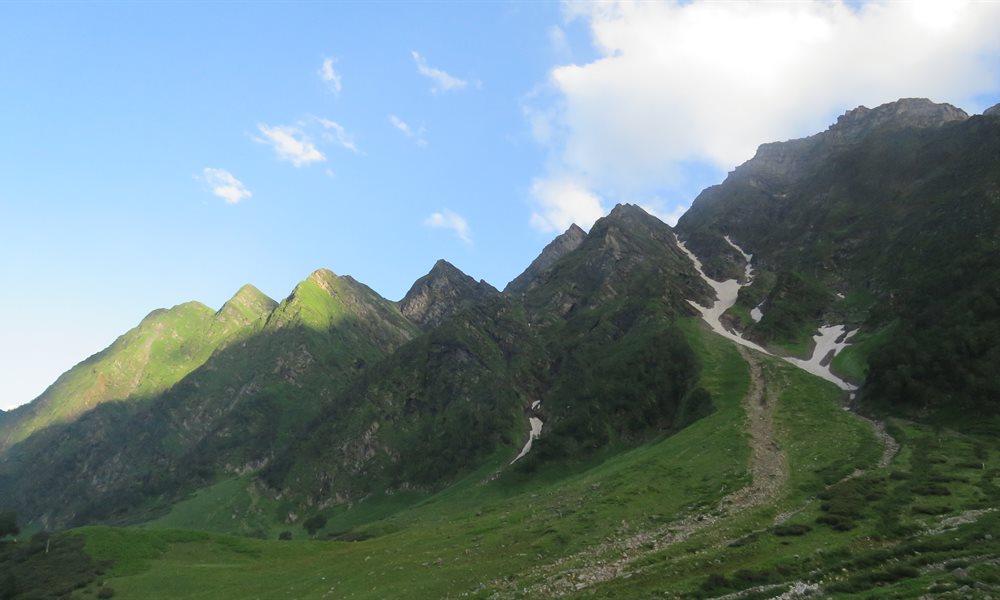 The path to Beas Kund is not a stroll in a park. One will have to go through steep ascents and descents, and most importantly the moraine section.

Moraines are the big rocks that are brought down with the glacier. When the glacier melts, big bulky rocks are what left behind.

Climbing these rocks can be tough and risky. Risky because these rocks are unstable and can slide from your feet anytime. 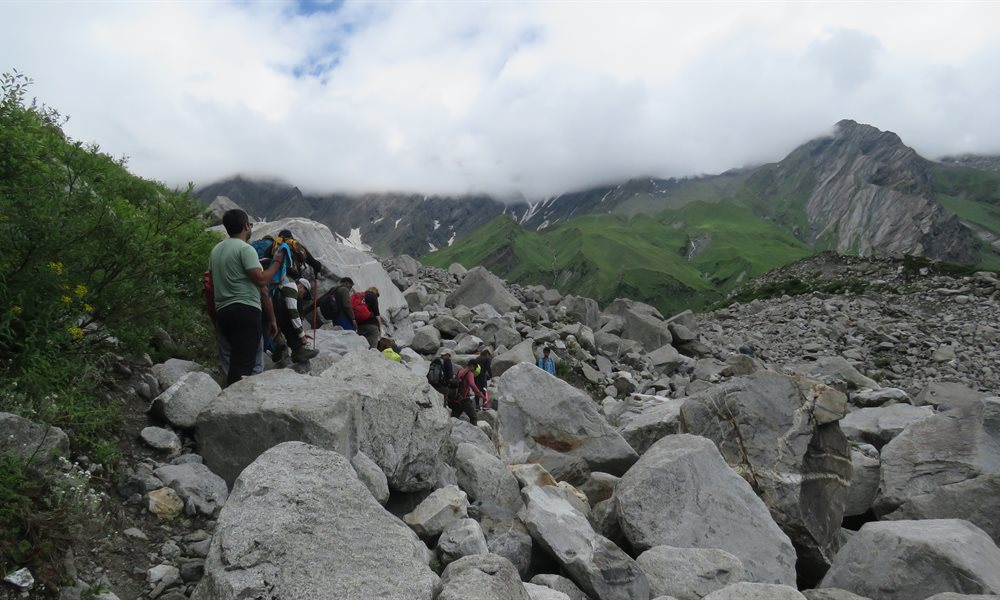 As soon as you begin your trek from Dhundi, you will encounter a countless number of rivers streams on your trek. While a couple of them have wooden bridges over it, for rest of them you are on your own.

It is fun hopping stones over the small streams while bigger stream will demand you to take precautions and ford the river streams well. 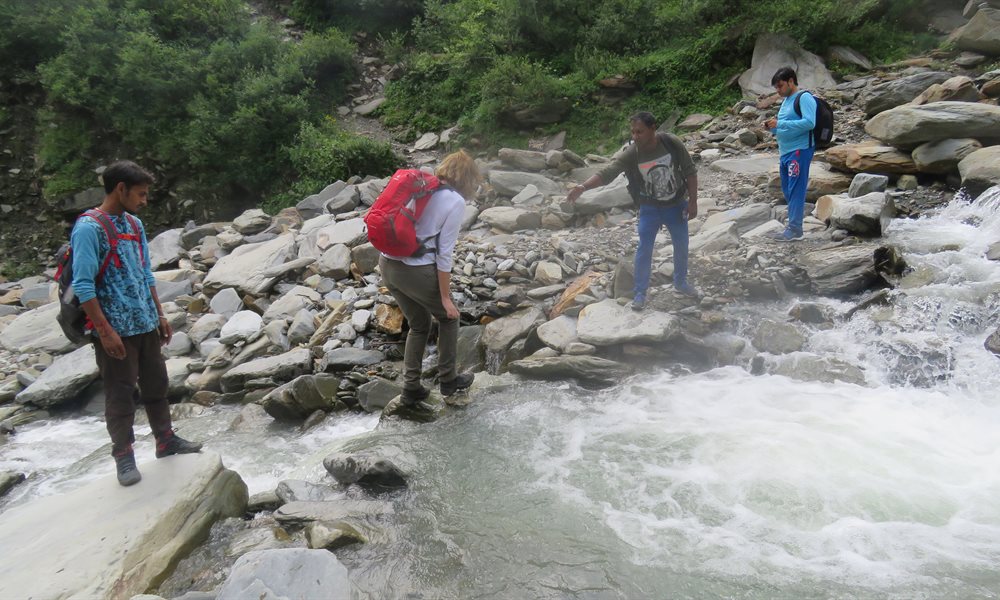 One may find snow until the month of May. But as the month of June approaches, the trail is carpeted with flowers of variegated colors. Yellow, red, white, and purple, there are flowers blooming as wide as your eye reaches. 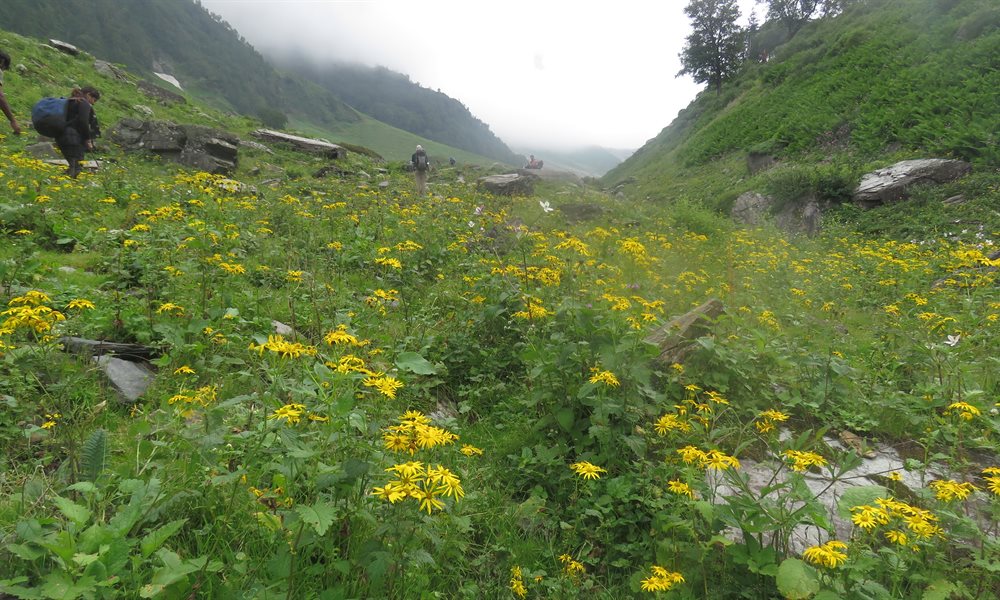 Bakar Thach literally translates to Shepherd’s Meadows. You will find shepherds tending their goats and sheep in the grasslands as you cross the moraines section.

It is always a pretty sight to watch sheep and goats bleating and grazing the fields in the mountains.You may also see a big and burly Himalayan dog guarding the flock. 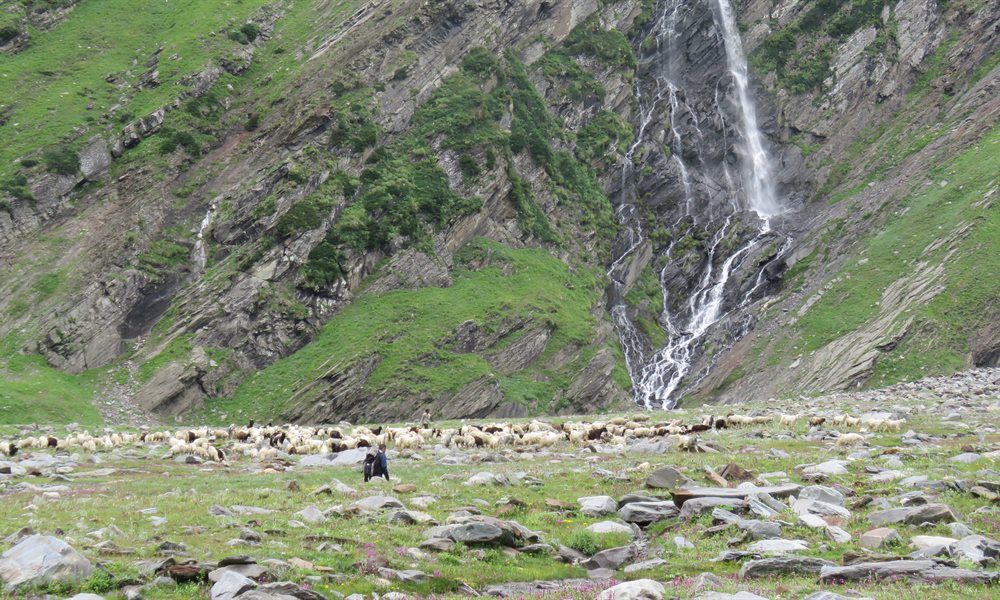 Ramayana was first written on the bark of Bhojpatra.

Bhojpatra or birch trees are native to the Himalayas whose white bark was used for writing in ancient India.

When you sight the Bhojpatras from your campsite in Bakar Thach, know that it is an indication of no tree line beyond that point. 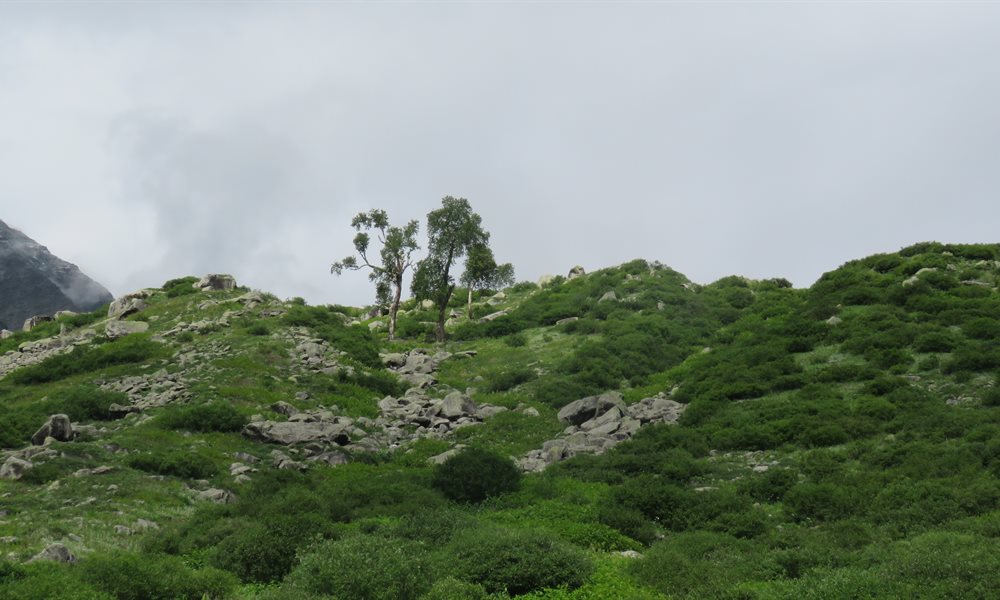 8. The long bushes and boulders

As you start your hike from Bakar Thach, you will cross green bushes which reach your shoulders, scree, and huge boulders that are the size of a meteor (just kidding).

You may also find wild strawberries in the bushes on the way and mushrooms. Don’t risk eating the mushrooms though. You wouldn’t know if they are poisonous or edible. 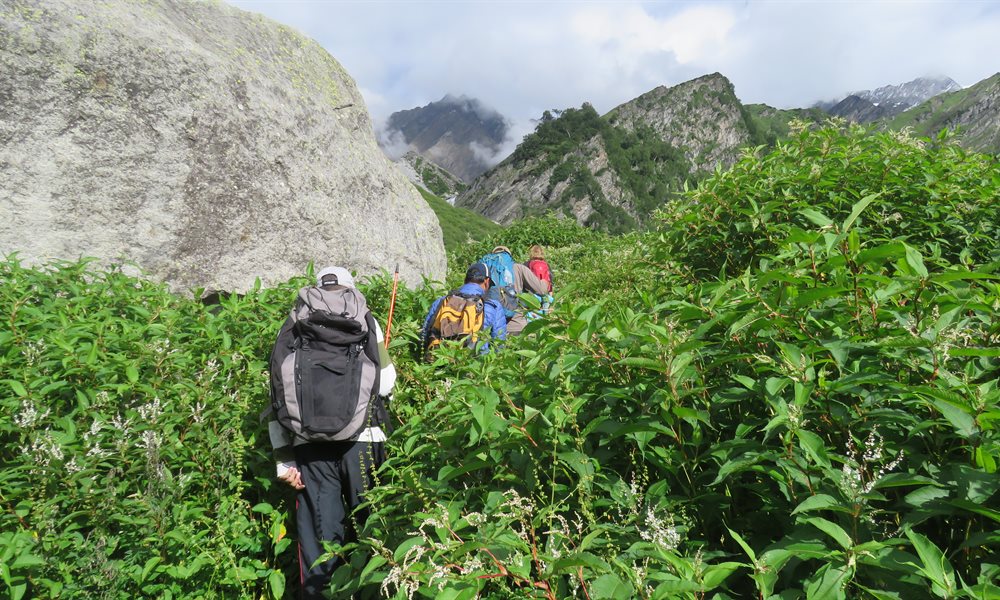 Photo by our participant Mohammad Waqas 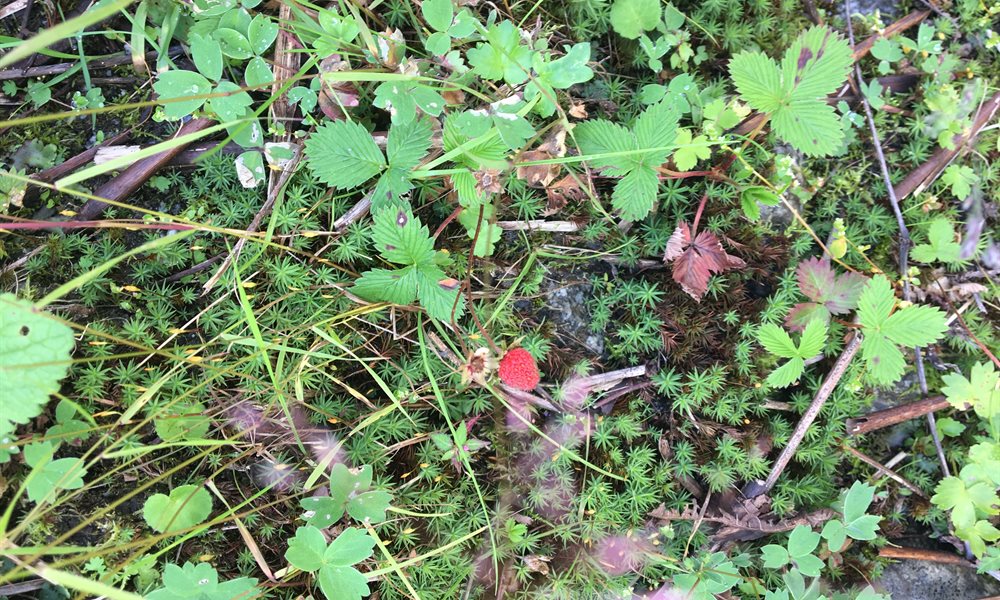 On your way to Beas Kund, you will come across the Beas Glacier in all its fascinating glory. The gray colored glacier was standing out in the whole setting.

My trek leader told me that mountaineering students are brought here to the glacier for a rigorous training.

I am sure it must look different in winters. The view I got to watch was hair-raising. 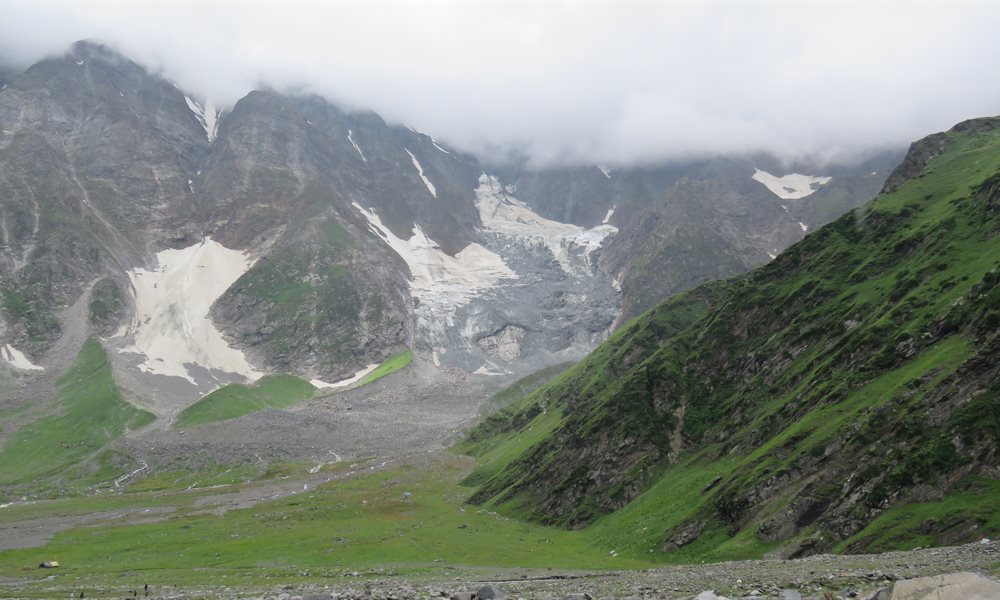 Finally, the penultimate reward of the whole rigorous trekking- Beas Kund. The pristine blue alpine lake which was hidden to the outer eyes but suddenly reveals itself when you walk forward.

There is a waterfall falling down that fills up the Kund.

It is believed that the writer of Mahabharata, Sage Vyas, used to come here to take a dip into the waters of the lake. Hence, the name.

I spent a delightful time by the side of the lake having a picnic with my trek mates on the carpet of blooming flowers.

Don’t forget to take a selfie. 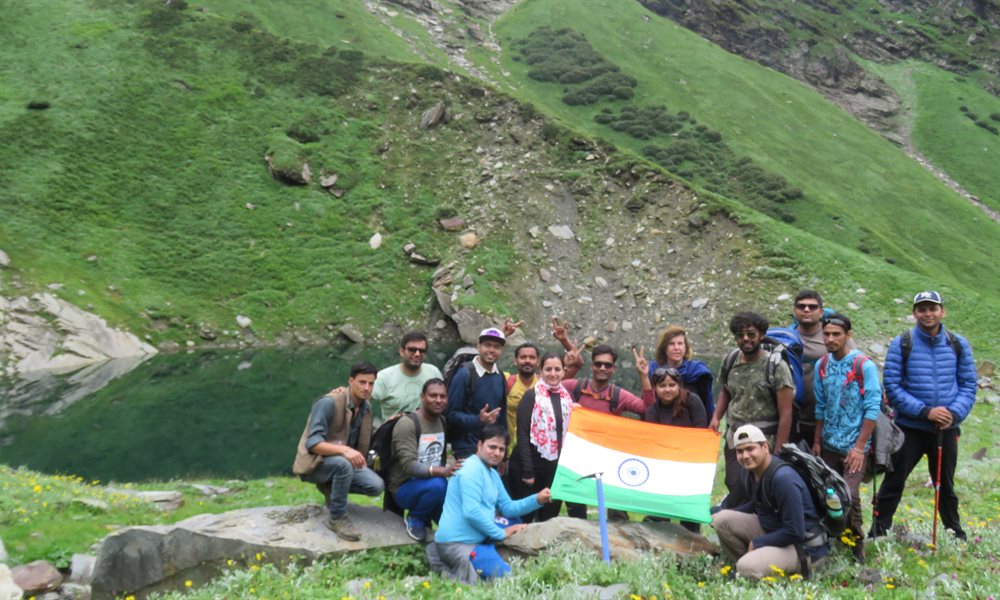 May is the last month of the year when you can expect a good amount of snow and ice on the trek. The snow adds a charm to the whole trek and raises a difficulty level up giving you a good boost of adrenaline. 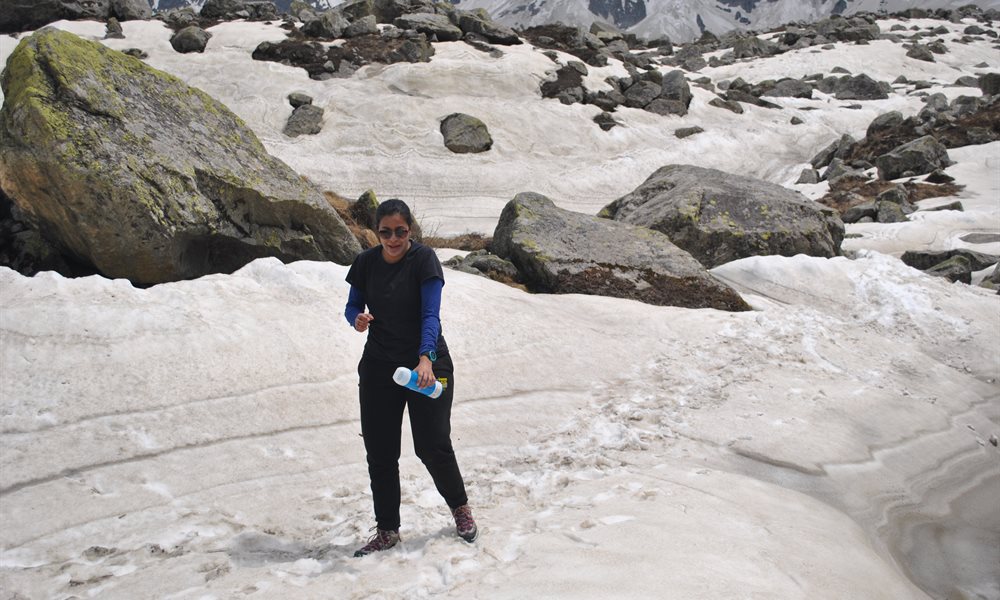 The trek starts and ends in Solang Valley- the crown of the Kullu Valley. In summers, it is a resort to many adventure activities like paragliding, zorbing, and horse riding. While in winters, it is covered fully in the snow with skiers dashing through the snow. There is even a professional Skiing Institue if you want to learn the art. 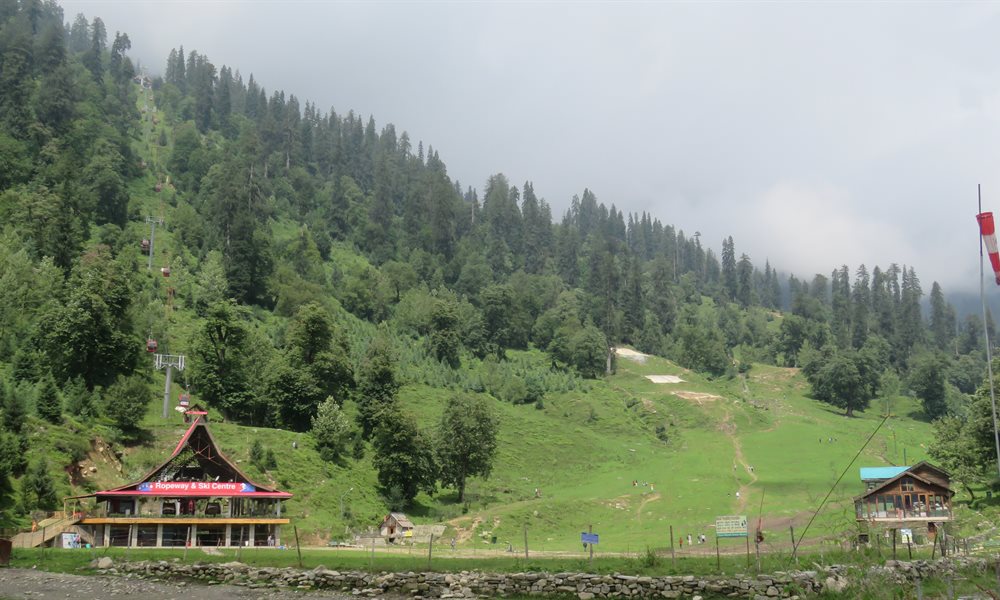 And did I tell you that it is a great stepping stone for beginners and novices in the world of trekking? After all, the students of Basic Mountaineering Course are brought here for the training. It has got all the elements one would expect on the trek. Hasn’t it?