How To Make Your Way to the Charming Hamlet of Kafnu

Kafnu is a charming hamlet in the Kinnaur district of Himachal Pradesh. With a population of less than 1000, this quaint Himalayan village which is at an altitude of 2,408 M doubles up as the base camp for the Pin Bhaba Pass Trek. This remote village with wooden houses and the warmest homestays is our entry into the landscape of Himalayan culture.

The steep slopes of the village are covered in apple farms. It lies at the banks of the fierce Sutlej river cascading its way in and out along the sides of this hamlet. This quaint little village is the best place to get some rest and peace after the long journey to Shimla and the subsequent drive up to Kafnu. 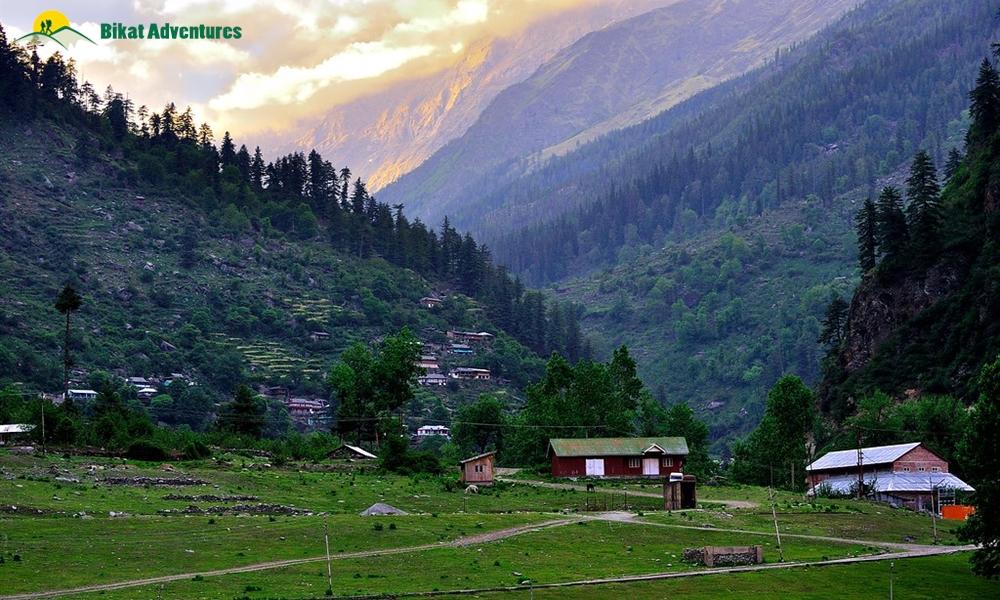 As you inch closer to Kafnu, you get a bird’s eye view of the 1,000 megawatts, run-of-the-river hydroelectric power station, Karcham Wangtoo Hydroelectric Plant. The force of the river and the beauty of the dam is sure to leave you awestruck by the marvels of high-altitude engineering. The dam is located between the villages of Karcham and Wangtoo, and hence the name. The journey to Kafnu becomes even more interesting after you cross the bridge at Wangtoo, as the magnificent views of Kinnaur ranges now open up to make your acquaintance. Based on what time you reach, driving past the sun setting behind these rocky mountains and the change in color of the landscape is nothing short of a visual marvel - a real-time theory lesson in aerial perspective!

This article fleshes out all you need to know about making your way to this small village nestled deep into one of the ranges in Kinnaur, Himachal Pradesh.

The easiest way to head to Kafnu is through Shimla. Shimla is the closest and the most convenient route to the village. Since it is a year-round vacation spot frequented by a massive number of people, it is well-connected to major cities in India by all means of transportation.

The road journey to Shimla is a visual delight! If you are coming by road, plan to head to Shimla and make that your first stop before heading on. This will give you an opportunity to explore this mountain city and also give you a chance to rest before heading out to Kafnu. The distance between Shimla and Kafnu is close to 220 kilometers. Although the roads are good, it always takes longer on the winding mountain routes to cover distances. Expect the journey to be anywhere between 10-12 hours.

Jubbarhatti Airport (Shimla Airport) is about 20 km from the city. It is the closest domestic airport. There are regular flights for Shimla from cities such as New Delhi and Chandigarh. However, they are not very frequent. Please check the status of flights during the time you have to travel to gauge the current scenario.

That said, the flights to Shimla can be quite expensive. If you are looking for a cheaper alternative, you can consider flying to Delhi instead (Indira Gandhi International Airport). From the airport, prepaid cabs or buses are plentiful, to reach Shimla. NH 1 and NH 22 lead to Shimla from New Delhi. Travellers can board luxury buses from ISBT Kashmiri Gate as well. The distance between Delhi and Shimla is 365kms and should take between 8 to 10 hours.

Although it is in the works, Himachal Pradesh is not directly connected by railways. Kalka railway station, which is at a distance of 96kms, is the closest railhead connecting Shimla to its neighboring states. There are frequent trains available from New Delhi and Chandigarh for the Kalka railway station. From Kalka station, one can hire private cabs to reach Shimla. 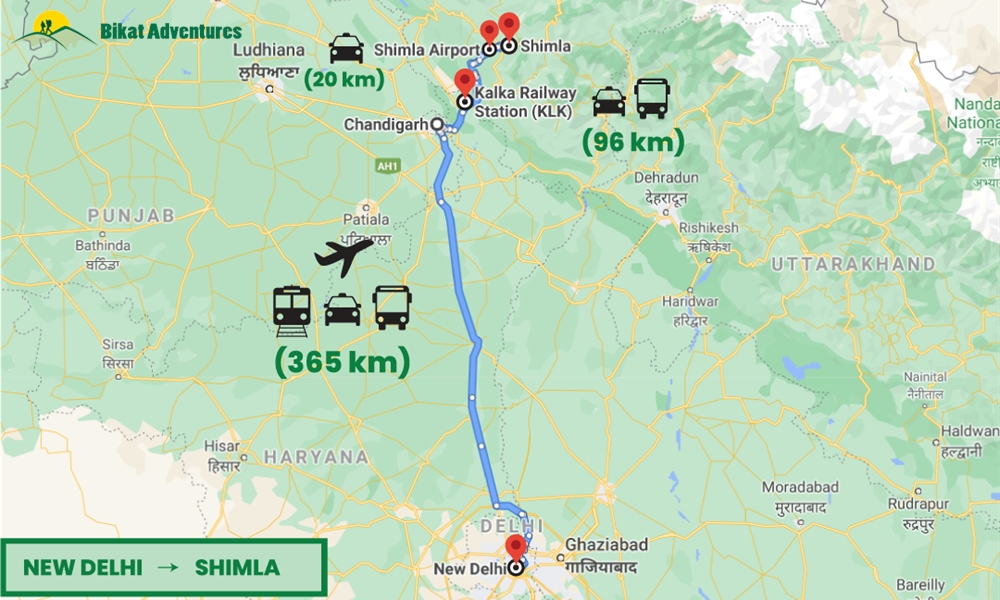 A couple of kilometers ahead of the Shimla ISBT bus stop, you will find a taxi stand. Hire a private cab or a tempo traveller which will take you straight to Kafnu. If you don’t get a direct cab to Kafnu, you might have to change your cab at Rampur. Cabs are a convenient option since they are point-to-point and will drop you right at your final destination.

From Shimla ISBT, there is one bus every day, which goes straight to Kafnu. The HRTC bus leaves from Shimla ISBT at 8 AM. However, it would be a good idea to make inquiries on reaching Shimla to find out the exact time, just in case of delays or cancellations. If you happen to miss a direct bus, there are options of breaking your journey into parts by changing buses at intersections. Inquiry for the same can be made at Shimla ISBT. The closest diversion is at Wangtoo which is 20kms from Kafnu.

Bikat Adventures also arranges transport (shared cab with other trekkers) from Shimla to Kafnu at an additional cost. If you would like to opt for this transport, please ensure you choose the respective option in the Ad-Ons section on the itinerary page. 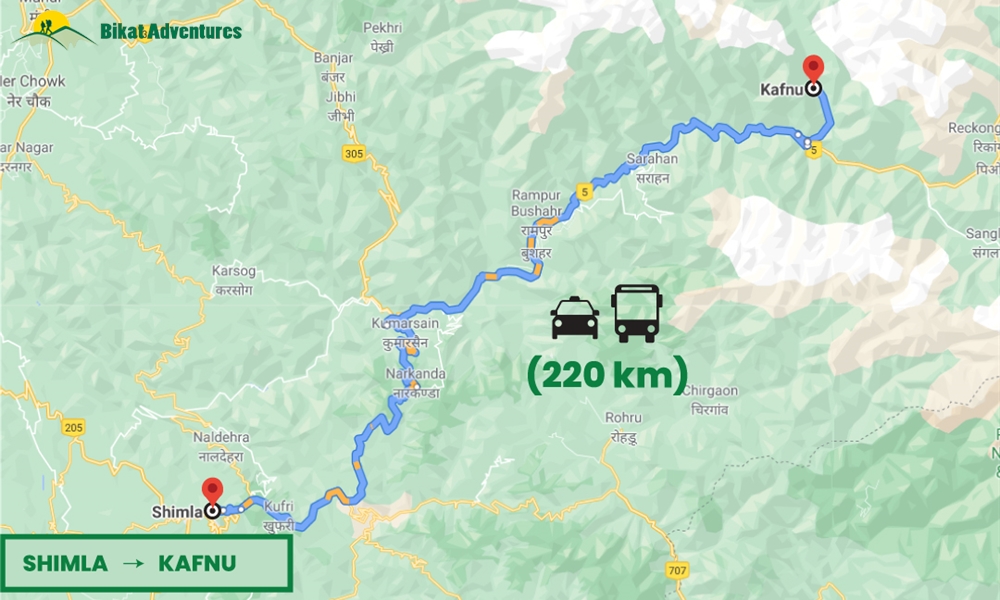 Since Shimla and Kafnu are at the foothills of the Himalayas, they experience extreme weather as well as constant and major shifts in temperature. It would be a good idea to look at weather conditions in the months you plan to travel to be better prepared for your visit. 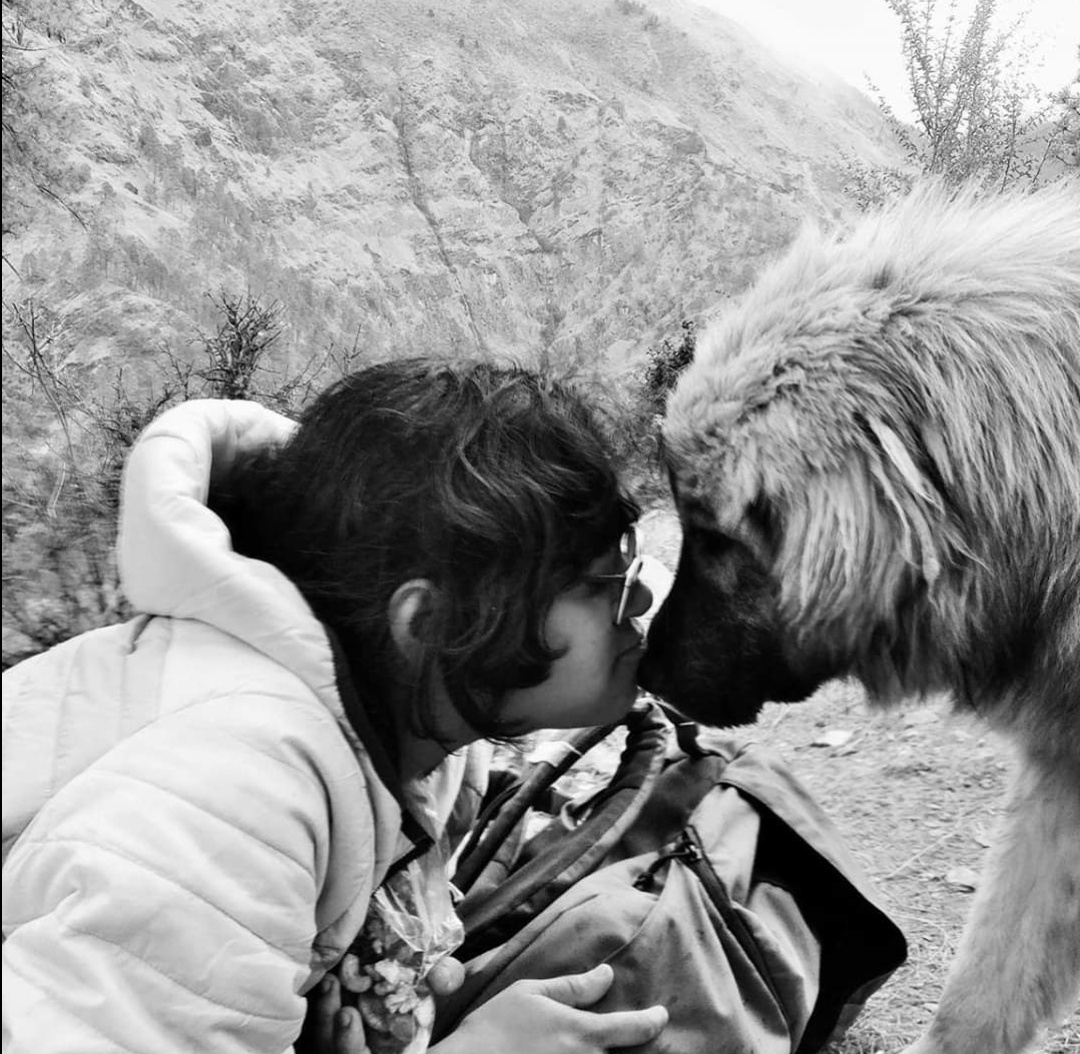