Trek Primera - Breaking Free From My Own Inhibitions

"When the soul lies down in that grass..the world is too full to talk about." – Rumi.

I was diagnosed with Juvenile Rheumatoid Poly-arthritis (RA) when I was 17 years old. Don't worry; this is not a post about a miserable disease and its suffering. It's quite the opposite actually.

Why I insist on telling you about my condition is to give you a fair idea about why walking up a mountain was so important to me. As someone suffering from an acute disease, I am advised not to walk too much, rest a lot, sleep a lot and you know the obvious medical mumbo jumbo.

What you are not advised to do is to go trekking for three days and kill that sweet remission that your disease had done you a favour by retreating into.

Anyway, this is not to say that I am a brave person or to some, an absolute fool, but just someone who didn't know how many of these opportunities my life would give me (The disease apparently gets progressively worse with age) and so I took the opportunity when it knocked on my door. A friend's friend runs an absolutely fabulous adventure company (Bikat Adventures) and there was a group trekking to Dayara Bugyal ahead of Uttarkashi, a small town in the mountain state of Uttarakhand, that weekend and I decided to cross my fingers and take that chance. 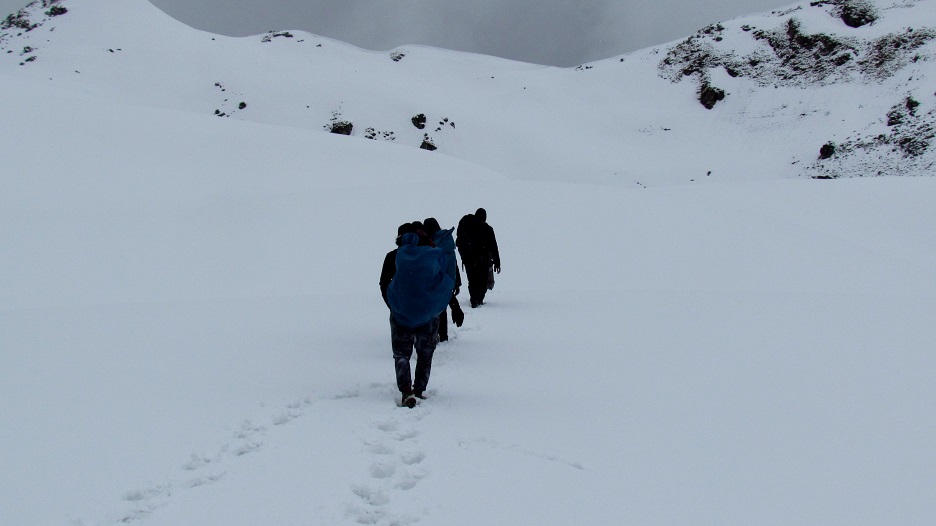 I read and re-read everything on the internet about strenuous exercise with RA and took all possible precautions. I took my medicines, took a shot right before leaving to give me that super steroidal boost that your body needs against struggling joints and even did some extra meditation to keep my crazy mind from giving up.

If you're wondering if I finished the trek after that detailed account of my preparation, you would be glad to hear that I did (Yay!), but that's not the point of this post, now, is it?

Before I started walking from Barsu - the base village, I just had one thing on my mind - I could not give up. There were too many people who asked me not to go ahead with this and I had to do this, not just for them but so much more for myself.

We had reached the village a little later than we estimated and so we trekked for only about 2 kms to reach a clearing where we camped for the night. Those 2 kms were tough enough. I had half a mind of reconsidering this. We had more than 10 kms of trekking the next day, half of which would be trudging through snow. Ritvij, the trek lead and Gaggi, our local guide lit a bonfire and all of us excitedly set up the tents. I would think about giving up tomorrow. As of now the tea in the steel mug and pakoras in my mestin were comforting enough to forget about the next day.

Keeping up with tradition, we heard local folk-tales about ghosts and guardian spirits guiding you through the treacherous mountainous path while eating our dinner of eggs and rice. Mountains make the simplest meals gourmet affair, don’t they? Maybe it was just the love of the village women who stopped by to chatter with us city kids and ended up helping our cook. The grass is always greener on the other side, eh!

The next day started early. We packed up and started walking.

If it wasn't enough that it was an uphill climb, my old, passed down by older brother, backpack did not help. In my backpack's defense - a very enthusiastic first-timer, I had also packed too many extras to make it twice as heavy.

Next time - I will just stick to the list they give me! No emergency will need an extra sweater or jacket to save you. If anything, carry some extra chocolates - that's all! 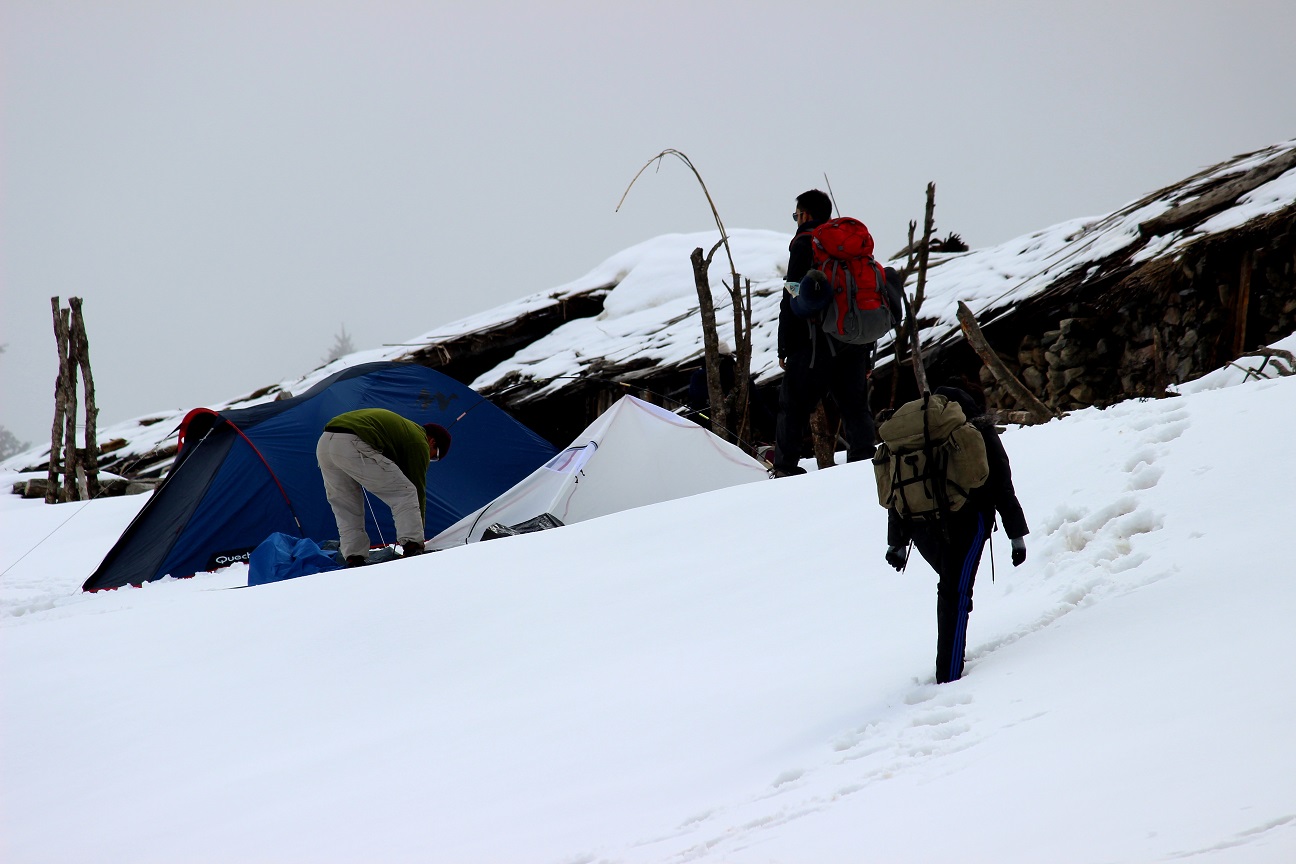 Our first big stop was Barnala Bugyal - A vast grassland with a beautiful lake on its edge.

Our mules overtook us and dashed for the fresh green grass on the edge of the lake. As I dragged myself to that last uphill stretch till the top of barnala, I kept thinking -"Come on, this is the last bit. At least for now."

As I walked ahead, I thought about getting there and crashing to the ground. However, as I reached the top, the view hit me. I just stood there and looked at the mountain beneath me and the vast grassland ahead. It was mesmerising.

In my endeavor to finish the climb, I forgot the most important part of a trek - the journey. It was so beautiful. How could I not see it earlier? The snow-capped mountains in the distance and the lake right next to me. I had a few minutes to take all of it in. I was so small, so negligible, in front of all this. My problems and my aspirations were tiny and so was my whole existence in front of those mighty mountains shadowing me. Before I could gather my thoughts, we started walking again.

However, this time I walked very slowly, stopping every 10 minutes to breathe in the surroundings, the sounds of the swifts swirling around in the sky, to the sound of the sunbirds tweeting in the Chir I was leaning against. Mesmerised I walked ahead and there in the distance was the first big patch of snow covering the grass justly so subtly to reveal the tips.

Excited, we walked fast till the first spot where we had to walk up the side of the hill through the snow. The first feel of snow as it entered my shoes made me extremely uncomfortable; I did not want to walk another 7 kilometers with wet socks. I am sure God must be laughing at me because of the insane, unprecedented amount of snowfall Dayara received over those 3 days. Oblivious, we walked on to find increasing amounts of snow as we climbed upwards. It was a long way to the top but it was so enchanting that my tired body hardly resisted the climb.

We reached Dayara Bugyal by 4 in the evening. It was covered in snow and as soon as we reached the campsite, we dumped our bags and fell to the soft ground, and as if the heavens knew we had arrived, we felt little white crystals on our faces. It was snowing. We lay there feeling the snow settle on our clothes, enveloping us into the most beautiful dream you could've dreamt.

As the evening progressed it got colder and we retired to the small stable where the bonfire warmed our cold feet and some warm soup, our hearts. 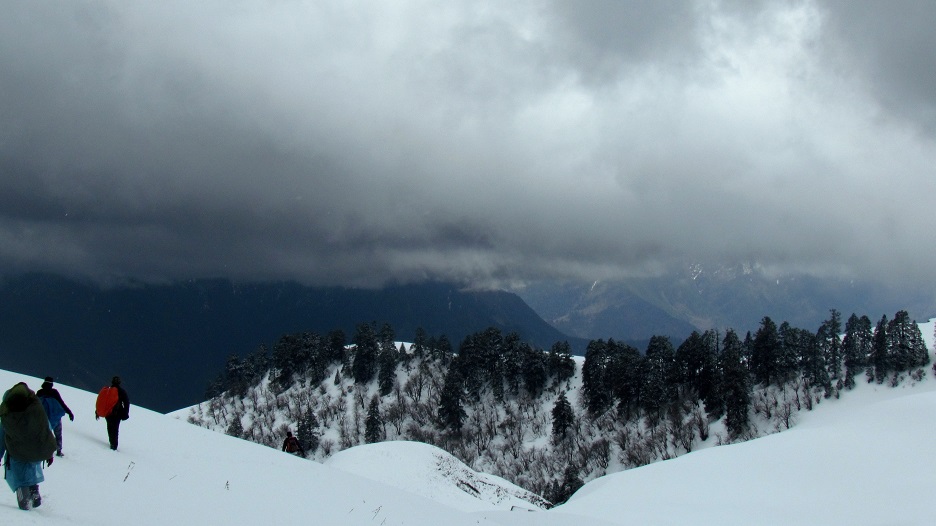 In that trance, we all fell asleep in our tents. It was uncomfortable and cold but the warm sleeping bag was better than any bed in a five-star hotel.

We woke up early to some heavenly lemon tea and breakfast. It was the last day of the trek and there was just one thing left to do. Trek up to Bakhariya Peak.

We stuffed ourselves with some breakfast and started walking towards the peak. The grasslands were covered in snow. Not a speck of ground was visible anywhere. It was incredible, to say the least. We went in thigh-deep into the snow with each step we took towards the summit. It was so difficult and yet so exhilarating to see the peak closer with each step no one even took a break as we approached the last half km.

We fell multiple times and we needed help to be pulled out of the snow but we didn’t take a step back.

As we reached the top and looked down, we heaved a sigh of relief. We did it! All of us stood together for the group picture and as the camera clicked, we screamed with pure joy. We were there. On top of that snow-covered peak.

In terms of mountaineering, it was hardly a peak. It's apparently just a peak where the sheep get the greenest grass and that's where it gets its name from. It was nothing, and yet for us, it was akin to climbing Mt. Everest. At least for me, it was. For a second there I just thought about all the pain that RA has put me through and yet maybe it was my condition that has always been a pushing point for me to get out of my comfort zone and do incredible things like this. Sure, as I write this, my RA is flared up, and it will probably take me a couple of days to bring it down but hey, I climbed a mountain! 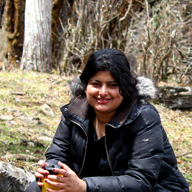 Richa is a Tree Hugger, Tea drinker and a part time Yogi. She loves dogs and cries every time she wa Read more