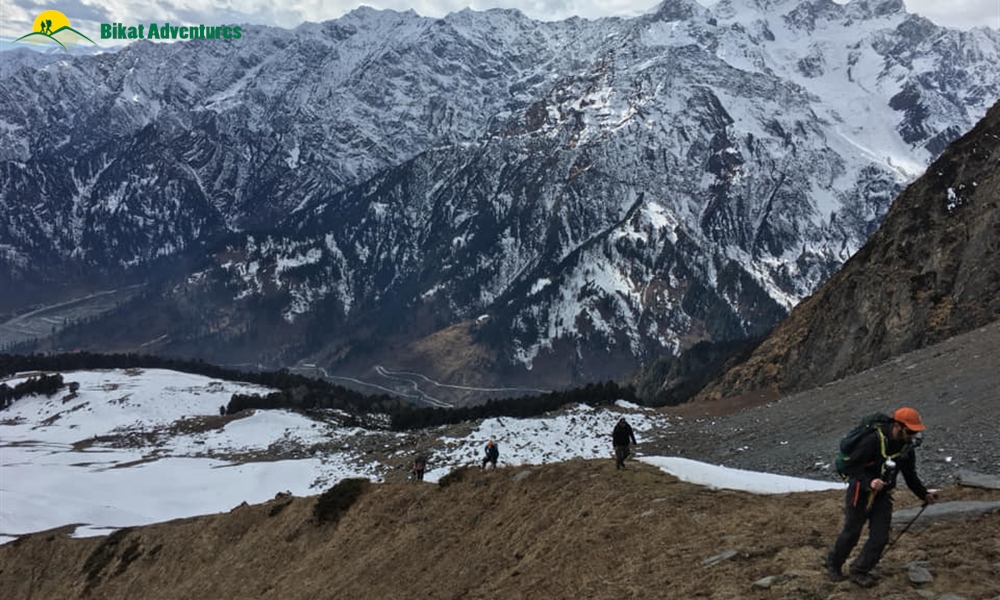 It’s hard to draw the line between seasons when you’re hiking all year round. 18,000 ft in June is just as cold as 10,000 ft in January. When December rolls in, however, it’s undeniably winter. I was super excited for our first winter hike this season, mostly because I had spent all of last winter with one arm in a sling. This was also our first exploratory trip that we had opened up to participants, and got a grand total of two people to sign up!

After the endless overnight bus ride from Delhi that I always dread, we made it to Manali’s main bazaar by 9:00am to meet Prashant and Archit, our first-ever volunteer additions to the Bikat Exploration Team. We introduced one another over a quick coffee, gathered some last minute supplies and headed off on the short drive up to Solang, the trailhead village for Patalsu Peak.

Solang is the last village as you follow the Beas up the valley towards Manali’s towering 5000 m skyline - Hanuman Tibba, Friendship Peak, Ladakhi Peak and Manali Peak. It was a familiar sight for me, having spent three months there, three years ago, during my mountaineering courses. I had spent countless evenings staring up at Hanuman Tibba, gotten within a thousand feet of Ladakhi’s summit and been on multiple acclimatisation hikes towards Patalsu. 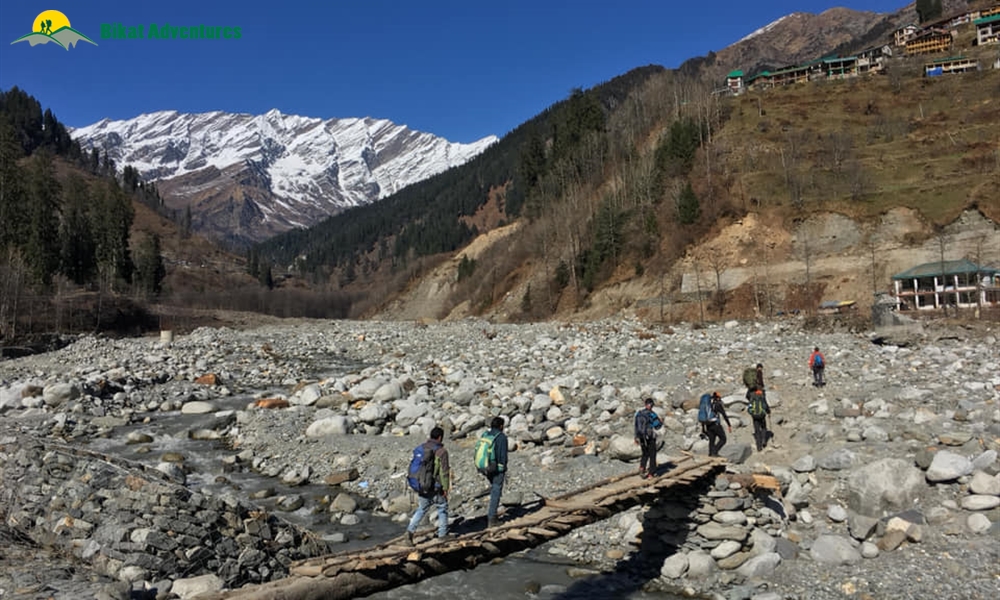 I’ve been through my fair share of Himalayan villages at this point, but something I’ve always been enthralled by is how unique each one seems to be from the last, despite them sharing so many commonalities. This one seemed to crawl its way up the side of the mountain, with stone paths zigzagging their way through homes, communal water pumps and crop plots.

The thing that caught my eye the most though on our 40 minute climb through this section of trail before leaving the taste of civilization behind was the temple. It was a rich brown color and stood on a stone platform overlooking the dropoff into the valley below- but it had eyes, cobra eyes. I realized quickly that there were snakes etched and carved into the wood everywhere I looked, and one cobra seemed to be looking right at me.

We left the village behind, but my phone still boasted 4G network - not being very far from the village means you never lose network on this hike. I decided it was strange hiking with a working phone connection, so I switched my phone to airplane mode. Patalsu’s lower slopes are typical of Manali wilderness - oak and pine forests, virtually endless meadows, bright blue skies and snow capped peaks hiding beyond the horizon. 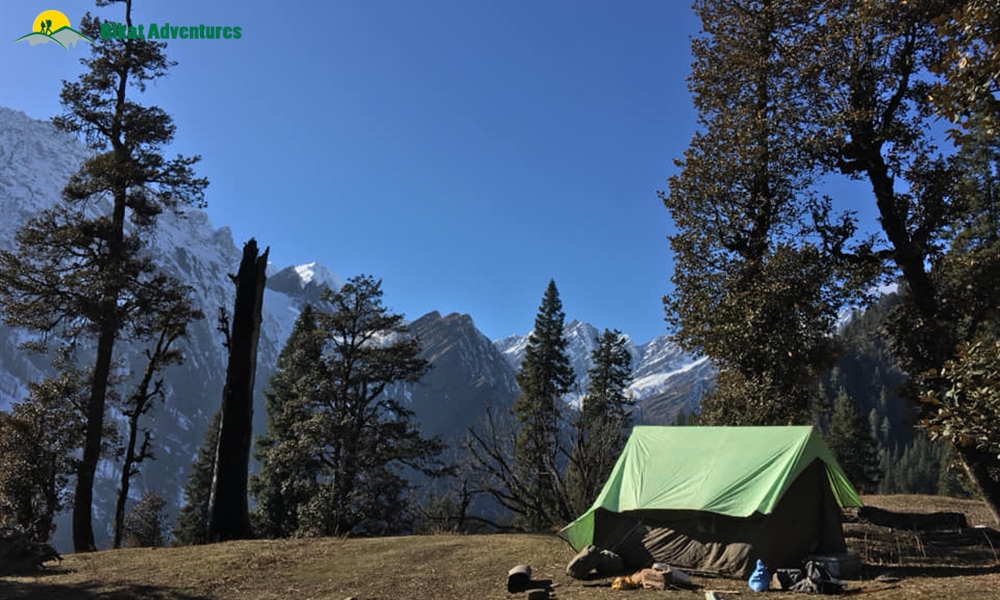 We got to camp after hiking leisurely  for not more than three hours. This was unusual for us - Cam and I had hiked into the night on multiple occasions on other trips this year. Three out of three nights, Rohit and I had ridden till 8 or 9 in the night on our Leh - Tso Moriri cycle tour. A clearing in the forest was our campsite for the next two days - and camp was already set up by the time we reached. Another unusual sight for us this year. I had forgotten the upsides of a mule/porter assisted hike, and half felt like taking the tents apart and pitching them again.

Dinner stole the show that night though- enjoying the perks of the short first-day’s journey, we feasted on a piping hot chicken curry and paneer dish, sweetly wrapped up with a box of soan papdi being passed around the fire.

As we move into my first winter season of hiking the Himalayas, I’m finding it more difficult each time to deal with the cold. I realized, as we huddled close to the fire, that this was the first time I’ve trekked here outside the milder summer months. January should be fun.

We slept early, tummies full and hands temporarily warmed by the fire, ready for the early wake up call to push for the summit of Patalsu Peak.

I guess I should have told Cam the wake up call would not be early. We slept till 8:30 in the morning - another unusual luxury and woke to being served tea in bed and the fire already roaring again. 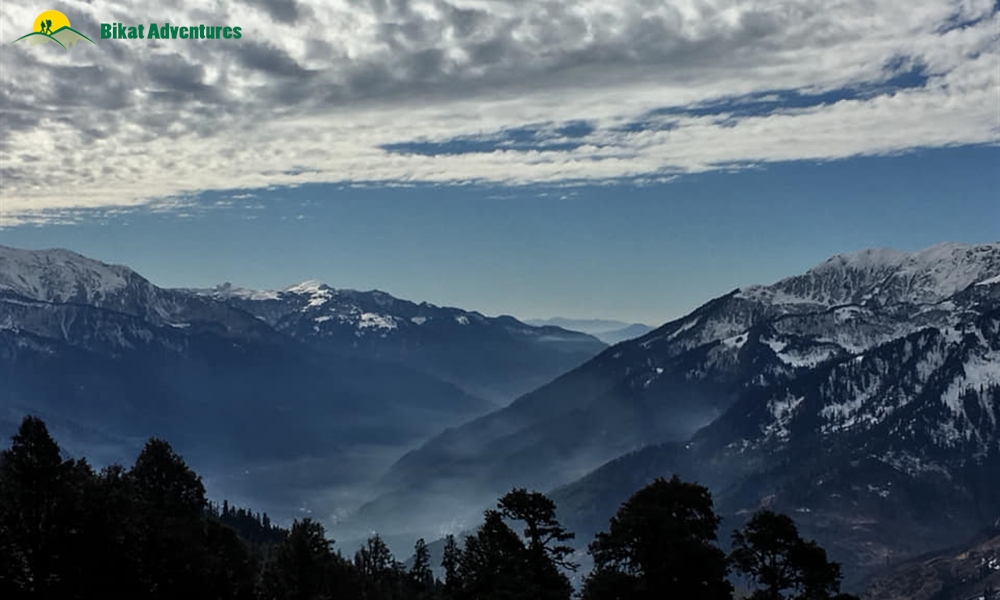 The difference in daylight hours between seasons is starker in the mountains than the plains. Already 9:15 by the time we were leaving, Patalsu’s slopes still hid from the sunlight.

We climbed through the last of the oak forests to finally emerge above the tree line - at a broad, circular meadow at the base of the peak. The sun was finally out and about - its warmth more than welcome.

We’d been getting clues all morning that we may be in for a snowy summit, since we kept crossing ice patches down in the forest, but nothing compared to the peak. Fully blanketed in snow, the sight reassured us that packing our gaiters had been a good idea.

The summit push for this peak is seriously one of the coolest ascents I’ve ever seen. We followed this strikingly sharp ridge all the way up to the shoulder of the mountain, balancing between two valleys as we went. I don’t know about the other guys, but I could not stop turning around to peek once more at the view behind us, with more jagged, snowcapped beauties visible each time. I quickly learned that we couldn’t stand still for long though- that cold is relentless. 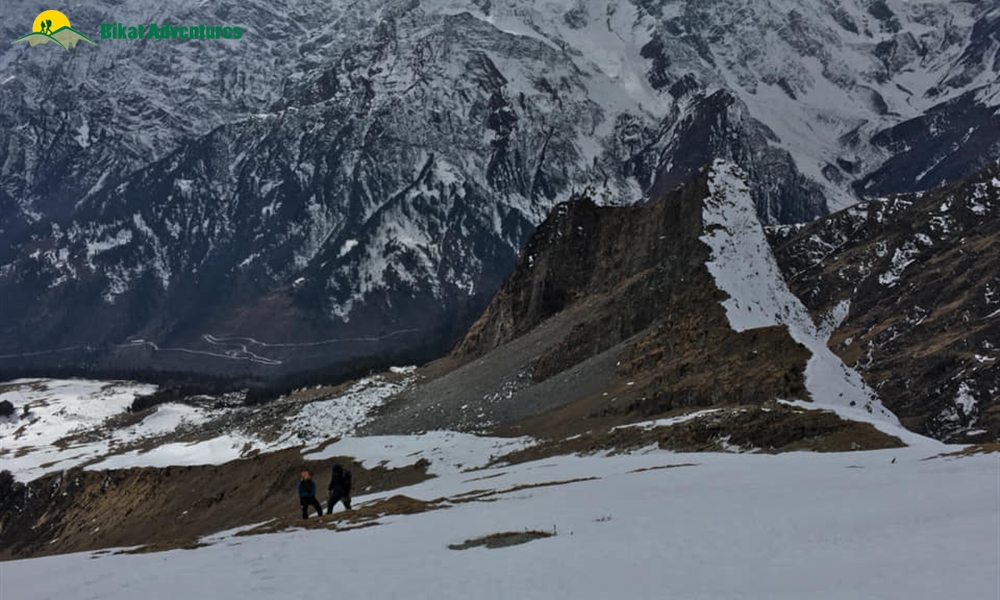 The weather report predicted snow showers that evening, and with a thick blanket of clouds beginning to cover the skies, I was inclined to believe it. Patalsu lies on the spine dividing the Kullu and the Lahaul valleys - a summit offers panoramic views into Lahaul’s rugged terrain and massive mountains. With the weather closing in, however, by the time we made the summit, the views had closed off.

On the brighter side (literally), we got the best view of the Beas Kund peaks I had ever seen. The temperature dropped as we sat down after a long, 4500 ft climb and I began picturing my sleeping bag and a warm fire.

I always find it interesting how sometimes, even though you were physically pushing harder ascending, that descending ends up being the more difficult journey of the two. The ice melting on that ridge had caused the frozen dirt to turn into a muddy slope- and for once I was happy to have a trekking pole to hold onto.

The last little piece of daylight that day was my favorite though. The sky faded from a brilliant orange to baby pink at dusk, and the forest became this wonderful quiet that you rarely find anywhere else. The summit view was astounding, but this moment in the forest still sticks in my head as my favorite of our Patalsu adventure.