Yuksom had one hell of a way to welcome us. Thundershowers, fairy tale gardens with flowers bursting in myriad colors, majestic mountains, and warm smiles were an assorted delight. This quaint place in West Sikkim is the starting point to the famous Goechala trek and is often visited by mountaineers all over the world. How these guys manage to keep the place unspoiled, given the magnitude of tourist influx, is a best-kept secret. Small and a beautiful village, it had a secret charm; a charm that's being passed down generation after generation. More than in the tiny magical homes against the backdrop of giant mountains, it was in the innocent, happy smiles of the people, that the timeless charms were locked up. Take the people out of this place, it would seem like a magician without his magic wand. 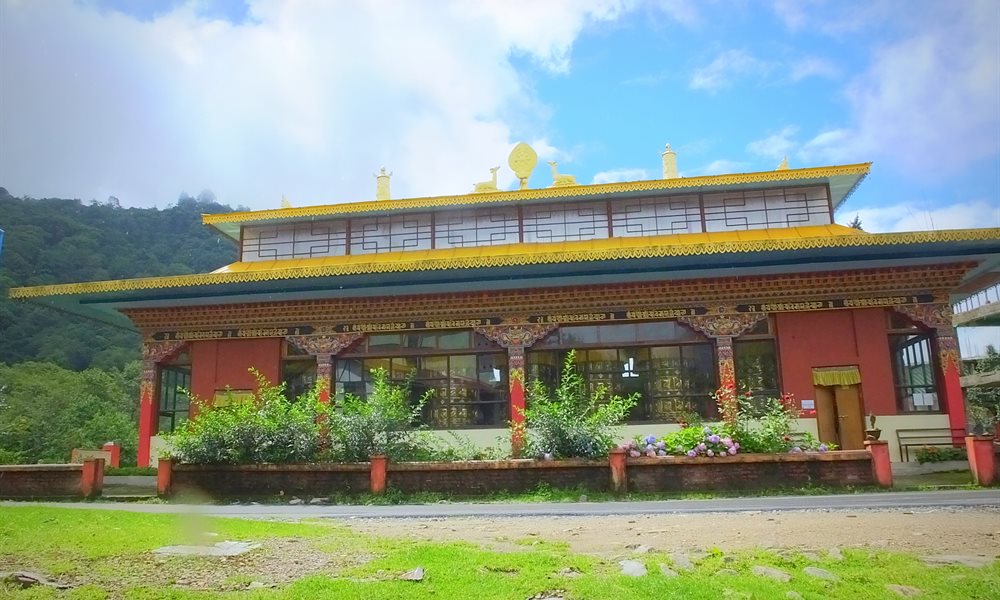 It was almost the end of the day when we reached Yuksom and exhaustion had taken over. We had spent close to 48 hours without sleep and our eyes were shutting. We crashed on our beds with the promise of waking up early for our trek to the Dubdi monastery. Early, next day, I felt the morning rays gently fall on my eyes, from behind the curtains. I checked the time on my phone. 4:10 AM. Oh yes, it was a land of early sunrise. We quickly had a bath and started on our trek to the Dubdi Monastery.

The dubdi monastery is a 4 km trek amid lush greens, gushing streams, wild woods (oak & chestnut trees) and ancient bridges. It is situated at a height of 2100 meters. What we call the ‘hike’ to this monastery is the route that the monks take every day (sometimes twice a day) to offer their daily prayers. The trek to the monastery was a fairly easy one even though it was slippery owing to the dampness from the rain, the previous day. We also had to carry salt with us to tackle the giant leeches crawling up our legs. 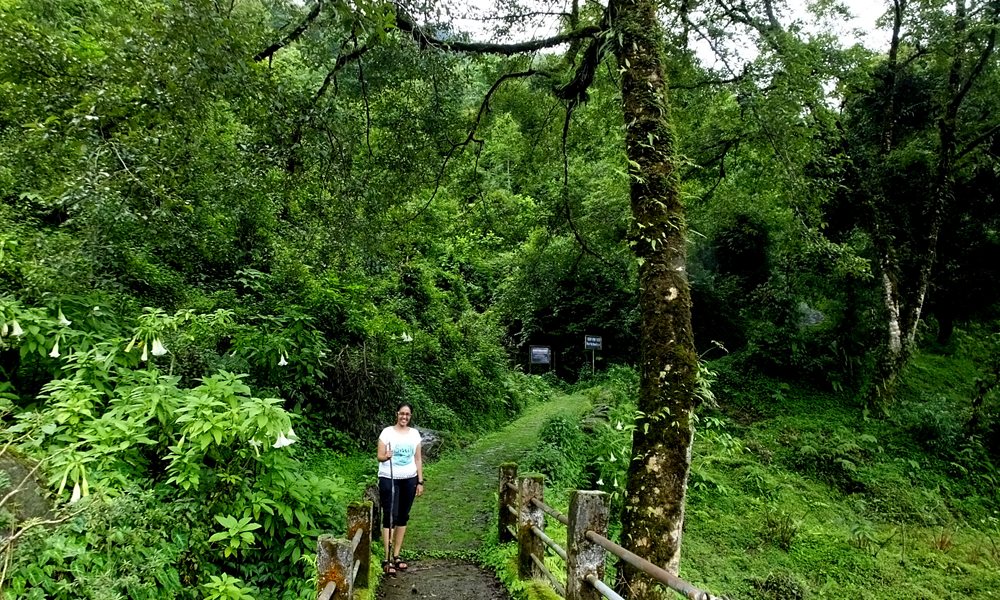 The bridge among the woods 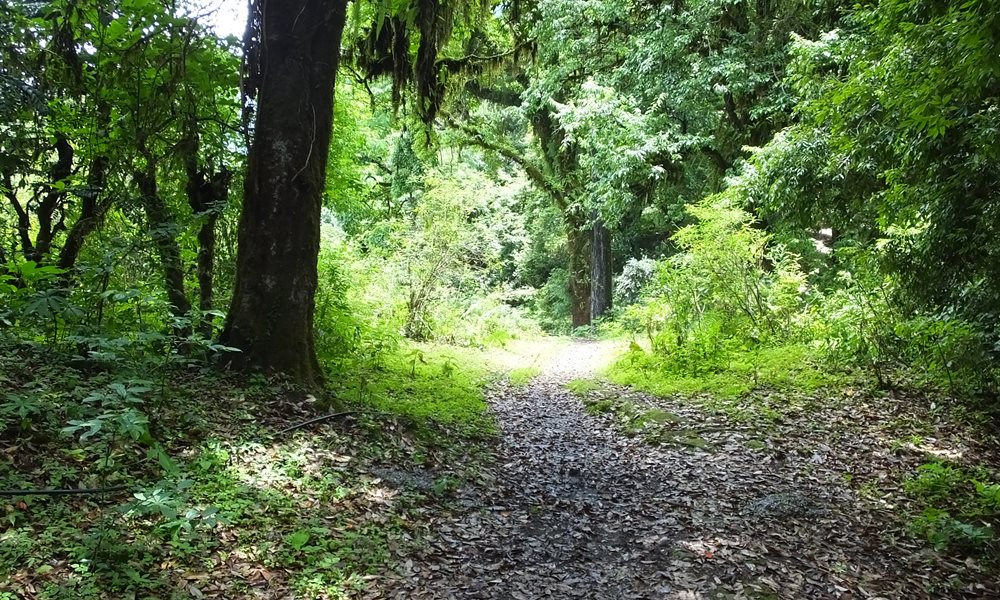 There was a mad rush in my head, out of excitement. I had never seen such a rich cover of green before. The air was fresh and filled with the aroma of damp wood and moist grass. As I moved ahead in the trail, the voice in my head slowly hushed down as I drank in the beauty of the place one sip at a time. The sound of water from the nearby stream was ethereal, as if it never existed. It was a zone-out moment for me entirely consumed in solitary contemplations ( or maybe just lost!). 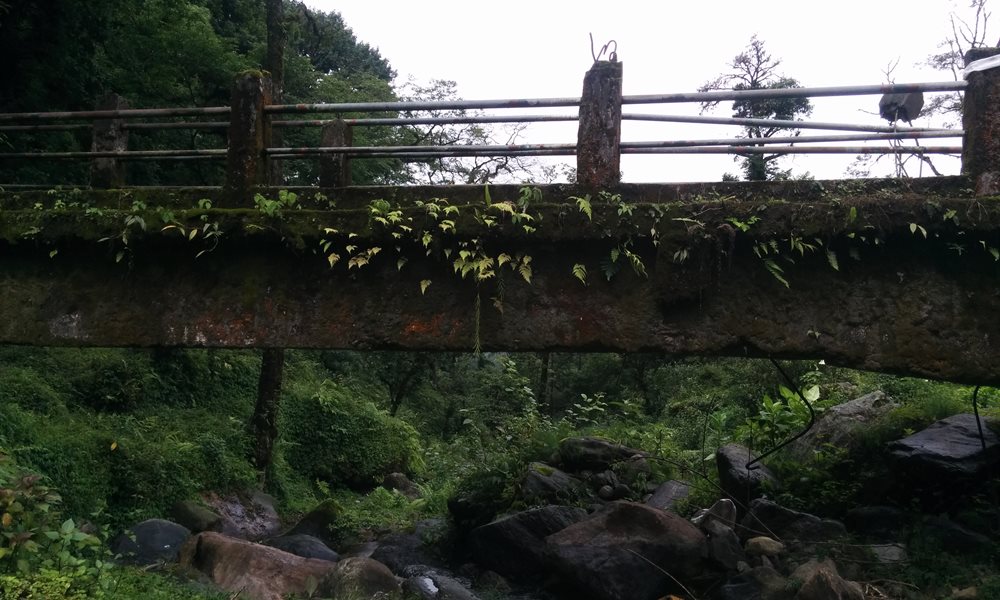 An ancient bridge overlooking the beautiful stream flowing by 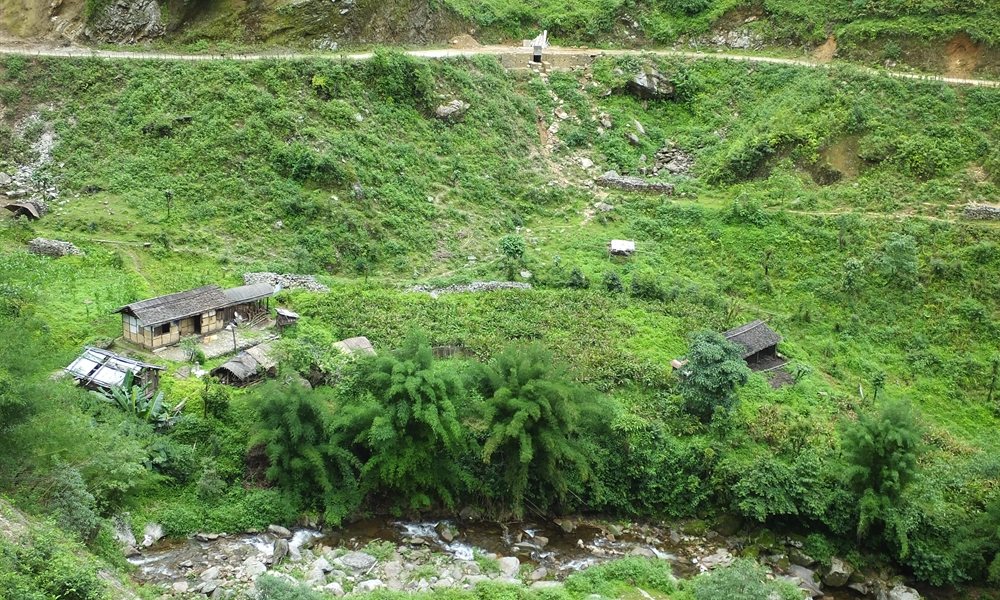 Is this how you pictured your place of solace, in your dreams?

Further up the trail, we saw prayer wheels that kept rotating with the force of water in the stream. The prayer wheels were kept inside small houses built with stones that added another layer of beauty to the green landscape. The ascent was gradual until we reached a fleet of stairs. The walk up the fleet of stairs led us to crossroads. Both the roads led to the monastery - one was a motorable road and the other was a steep climb to the monastery - only around 500 metres away. We opted for the steep climb and the monastery greeted us with a view to behold. Secluded and tucked away on a hilltop, far from inhabitants, it stood against a panoramic view of the mountains (also snow capped, depending on which season you visit). There were only a few people working on renovating the monastery, destructed by earthquakes, back in 2011. This trek wasn’t anything like the previous high endurance treks I had been to. But the views were equally rewarding. 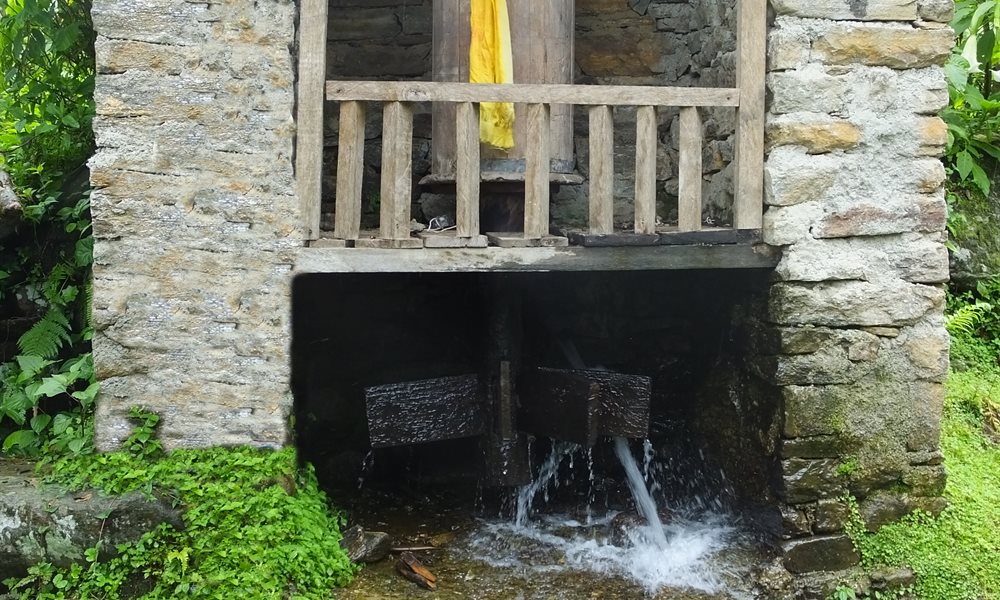 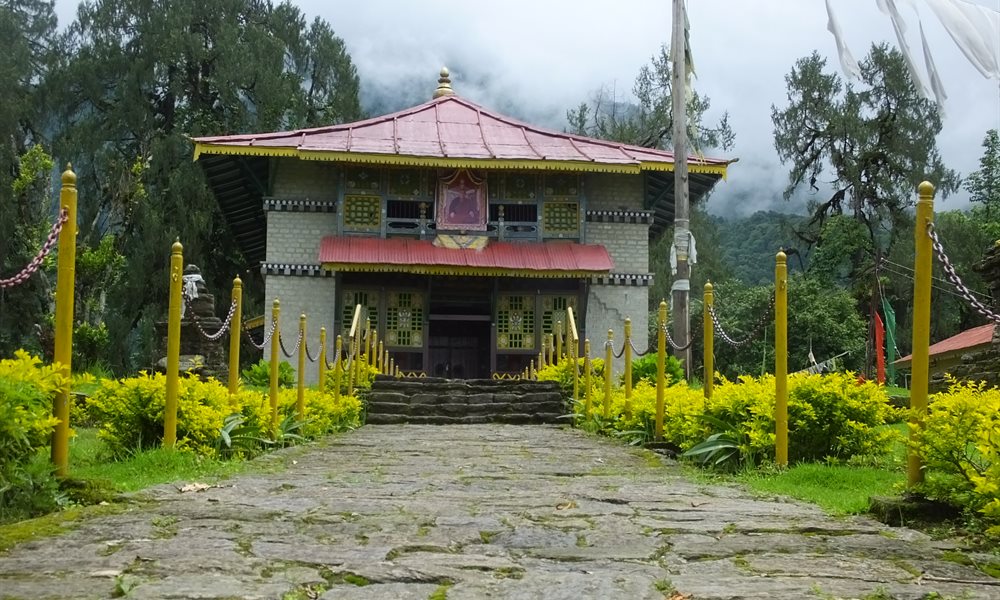 The first view of the Dubdi monastery

A shrine (in the monastery) is called ‘Ghompa’ by the locals. This Ghompa, in particular, had lots of stories to tell, given that is it one of the oldest monasteries in Sikkim. It is a two storied building built with stones and painted with Buddhist prayers and other symbols of Buddhist relevance. No photography is allowed inside the shrine and visitors are expected to leave their footwear outside. Within the monastery is a perfect spot to sit and meditate. It was wonderful how such places can give you a sense of serenity that can be out of the world. I can assure you that it is definitely not an everyday feeling. 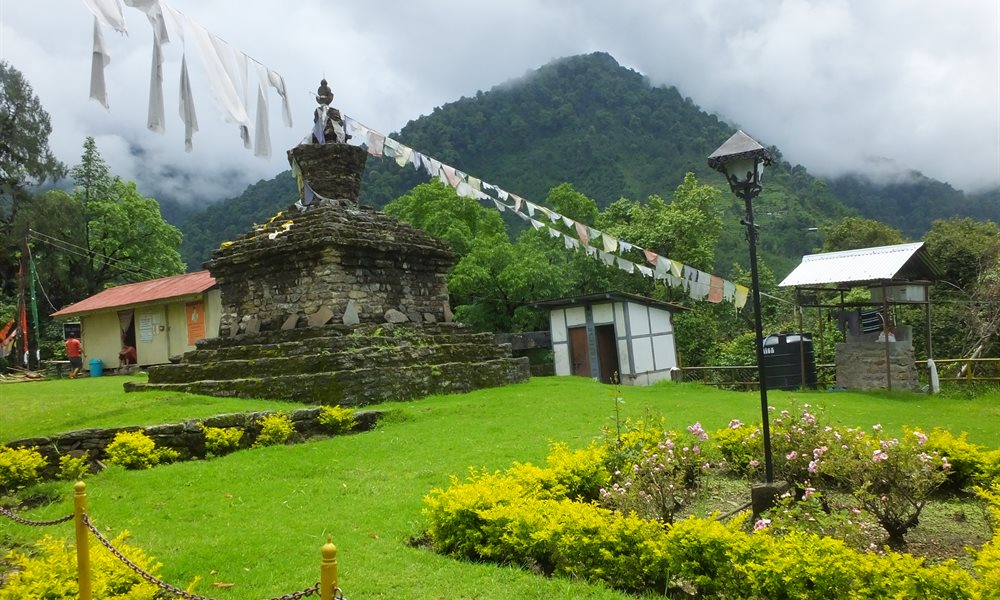 50 shades of green? The beautiful 'stupa' and the prayer flags

After spending a few hours in the monastery, we decided to continue the trek to the Hongri monastery which is beyond a village called Tsong (called Choong by the locals). The higher we climbed, conversations stopped, as we lost ourselves in the beauty of the landscape. We met a couple of villagers - men who smiled and asked us where we were headed to and women who responded with shy smiles when asked if we were heading in the right direction. It was almost the end of the day by the time we returned to the homestay, feeling hungry, tired and elated. 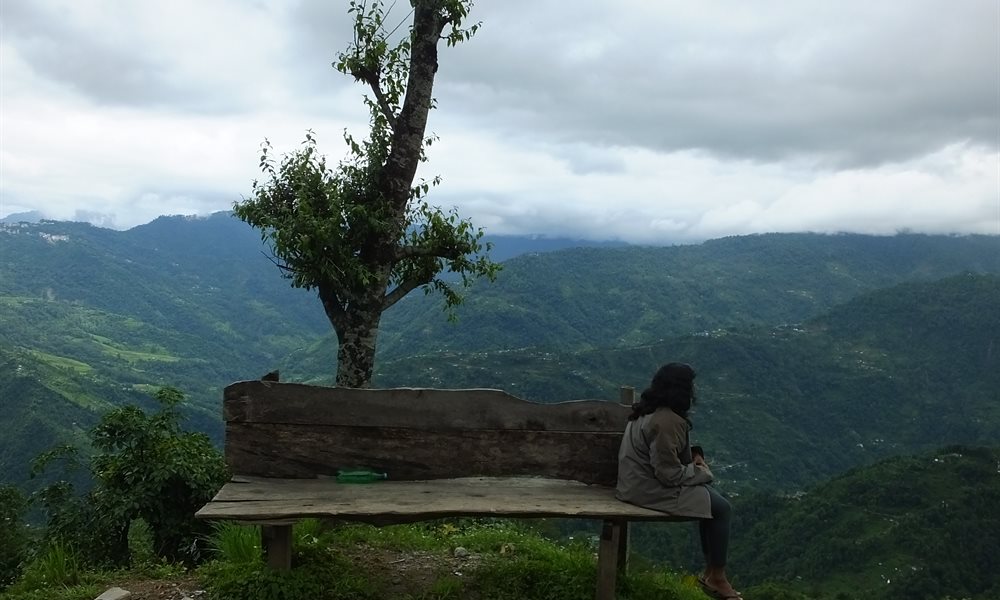 "An adventurous life does not necessarily mean climbing mountains, swimming with sharks, or jumping off cliffs. It means risking yourself by leaving a little piece of you behind in all those you meet along the way." - Shawna Grapentin

Between the journey up and down those mountains, we lost ourselves umpteen number of times, sometimes in the vibe of the place, sometimes within our own thoughts. I have also wondered how these locals manage to have a normal way of life. If I lived there, I would probably be caught in a permanent state of trance, dazed by the mountains and smiling by myself all the time. But most importantly, we managed to find ourselves again in the gratitude of being alive to live the moment and in the warmth of 10 years of friendship that we shared in spite of all the differences. 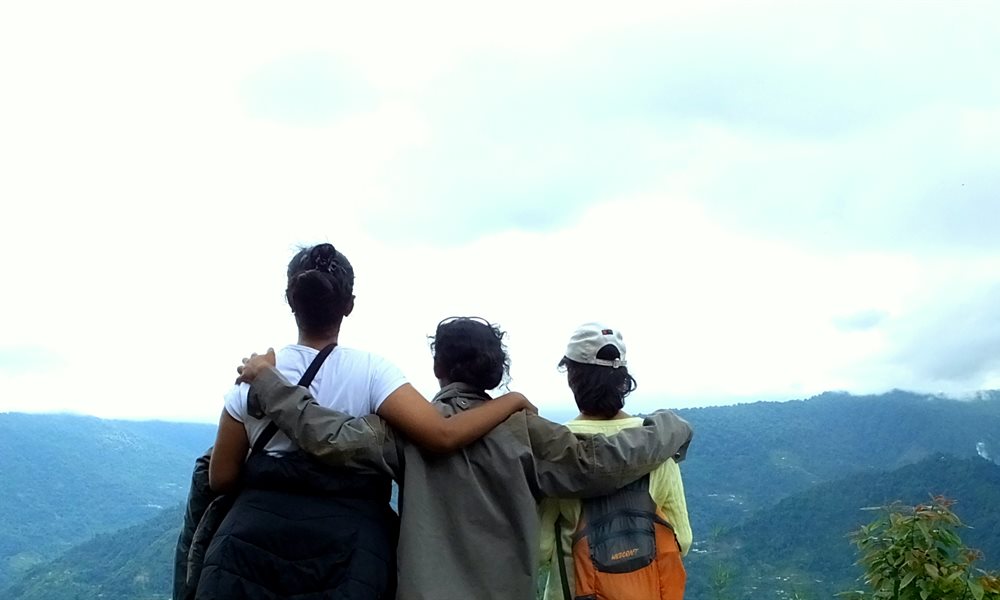 For someone who is quite skeptical about the idea of falling in love, this place has certainly made it so easy for me. It was love at first sight!

How to get there: Shared taxis are available from Geyzing and Legship. You can reach Geyzing from Jorethang in a shared taxi too.

Where to stay: Limboo homestay. Cost is Rs. 1000 for two. Organic vegetarian food available for breakfast and dinner. Warning: It is impossible not to fall in love with them :)

Nearby attractions: Kathok , Khecheopalri Lake , Coronation throne and Phamrong waterfalls. If, you, like us, want to just unwind, just take a stroll around the quiet town all through the day. This place is really something.