My office's shoes had become dirty so I wore trek shoes that Friday as they were clean, though for the first time. :P.. I was analysing a clash between door panel and seat on my system.. Lot of engineering stuff:-/..

Suddenly my eyes fell on the thread that came out of the shoe.
Instantly, I missed the feeling of being into the forest and onto the mountains.. Definitely that thread was the result of similar adventure..

I rested my head on the table and escaped into my thoughts..
My colleague next to me awoke me asking if I was right and I responded him with a unwitting smile on my face..
I remember it because that was the very much exact moment when I felt the vibration of my phone and I realized that I'm not right in my mind.. I came back to reality moving panickely to answer the call..

It was Omkar calling me.. As soon as I could reach my ear with the phone I heard him asking if I was coming on a trek..

"Yes !!!", I exclaimed in no time.
And a laughter spread on both sides because this wasn't the first time that it did go this way. :D.

Already plan was made and 8 people excluding me were already in. I was familiar with two of them. Omkar, my friend and other one was 50 year old passionate lady trekker Savita ma'am.. I call her ma'am as that is too much convenient for me..

Plan was set for Harihar fort in Nashik which is around 250 Kilometers from my hometown pune and Omkar told me that we will be traveling overnight the following day and we will be returning on the subsequent night.

Harihar fort is an important fort in Nashik that was constructed to look upon the trade route through Gonda ghat. 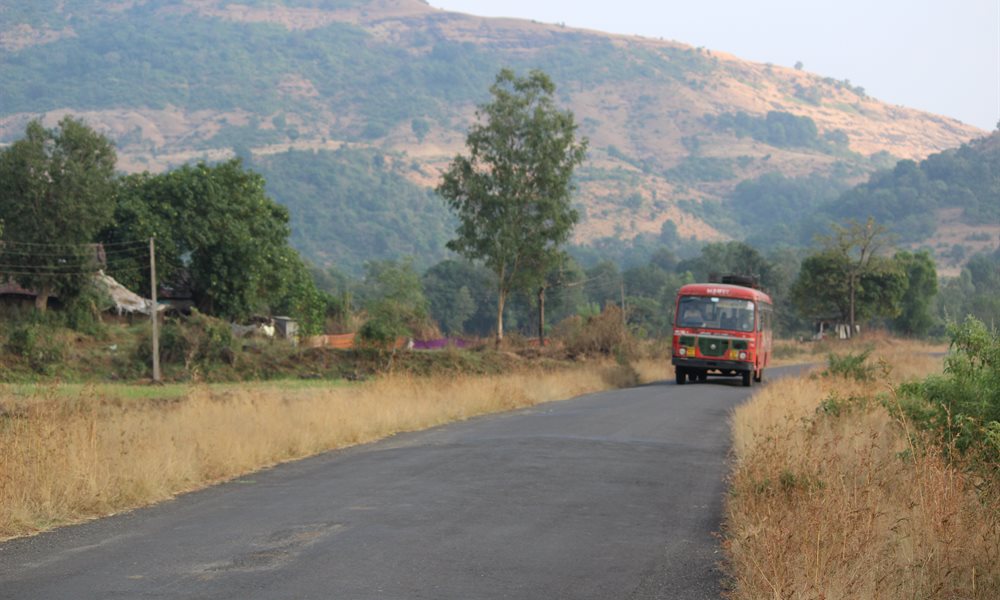 I was glad to know that I was going to spend my weekend somewhere, where the network is weak but I'll be living to the fullest, which will cost me money but make me rich in knowledge.. as someone had said it that "the traveling is still the modest form of learning.."

On the night of actual journey, Omkar parked his bike at my place and we both hopped onto the bus that we had booked for the journey. Although we were 9 but the bus was 17 seater. So I thought we would be dancing and playing a lot during the journey. We reached Shivaji nagar station at around 11:30 PM, where remaining participants boarded the bus. I saw all new curious faces and the familiarization with each other began with the wide smile and eyebrows pulled upwards..

But as the matter of fact, none of us wanted to miss our adorable good night sleep, and with the lot of space available in the bus, we all preferred sleeping.

Well, Harihar fort can be scaled by two ways, one is from the village "Harshewadi" and the another one is from village "Nirgudpada". The later one is much popular and we felt comfortable with this.

We had our breakfast on the way and we reached Nirgudpada by 7 AM. The fort was visible from right where we parked our bus and all of us were frightened by those steep patches visible from the base. I already had read a lot about this fort and those 60° steep and 2-3 foot high steps which are around 30-40 in numbers. That brought a thought in my mind that the people at that time must have been too tall and their creation of that time have no match in modern world.

We carried ourselves with the fear in our minds till the base of those steps. Well no one really did talk about it but from inside, everyone was scared. We sat there for a long time taking photos and we were not the only group there. Many other groups were present that day and many had quit the trek from there onwards. I had a talk with one guy from another group who was sitting on a rock beside me. He told me that he had come there second time and he did not dared to climb those steps this time as well. Many people were climbing first two or three steps just for the sake of posing for the picture. Our group started climbing now and as I began, I realized it was actually too much easy. The notches made in the stairs help a lot providing grip. 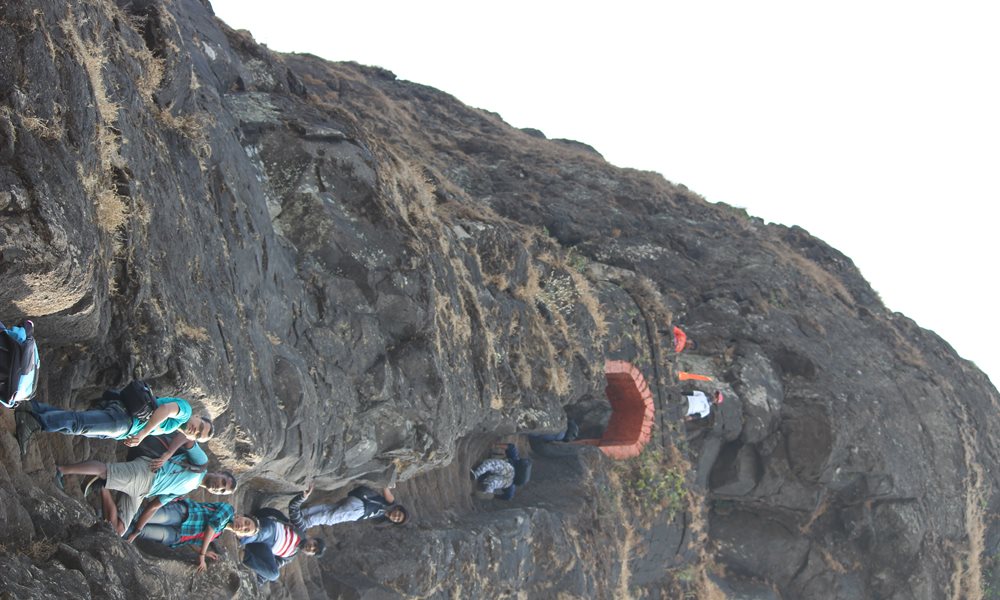 "And so the fear is only the demon that flew away as I took a first step", I realized.

After climbing those steps, path takes traverse to the left which is again awe-inspiring creation I believe. The path is completely carved out of the mountain and forms a cantilever.

One thing I have realized in these days of hiking through the mountains is that whenever I come across such trail and I dare to walk upon it (taking complete precautions and not doing anything stupid or heroic looking stunts), I found my inner strength grown and I realize that this is the way to achieve peace. I believe, I am not the only person to feel like this, many have confessed this with me while on treks. 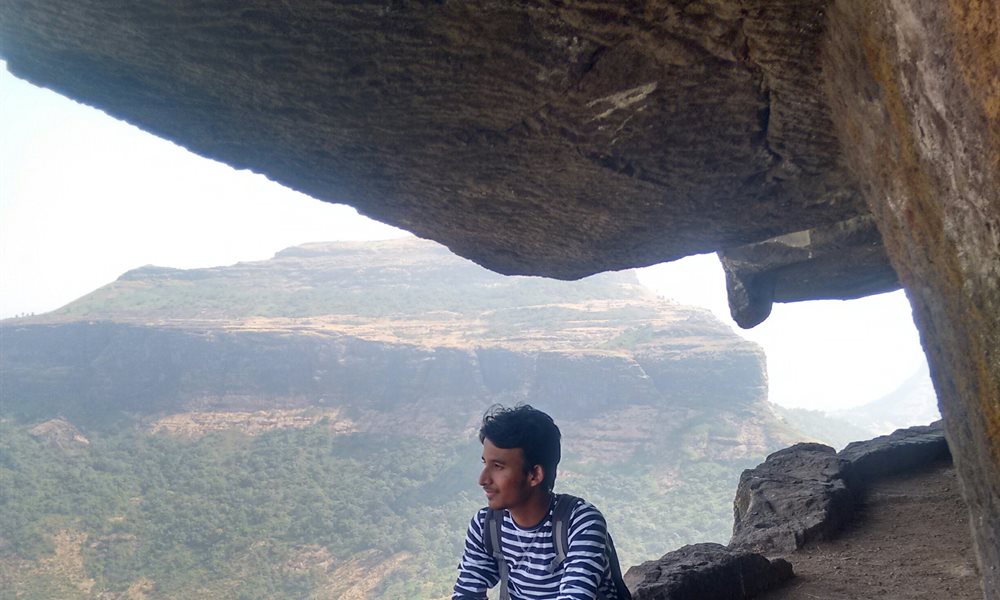 After reaching the safe zone, the trail gives another surprise with the stairs inside a cave type structure, where, lot jam happened as some othe groups were descending down and the trail so narrow that only one person can walk upon it at a time. 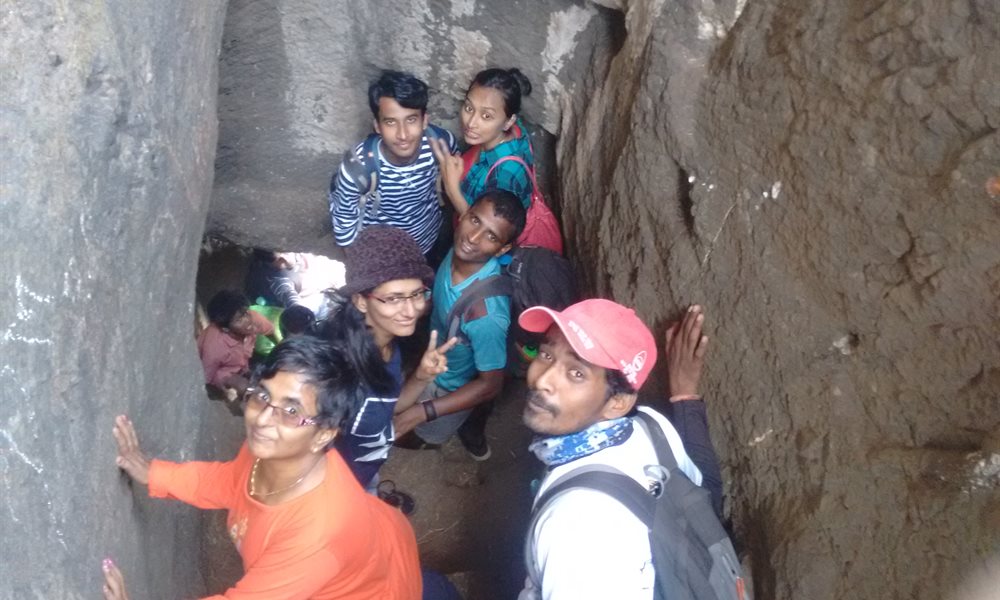 We had a lunch on a plateau from where we were enjoying the mesmerizing beauty of mountains. Beware of the monkeys up there though.. :-P..

Now the only one patch was left, that required some arm and soul strength I think. With the help of each other, we reached the summit just to realize that all the pain was worth it. :)..

What is so good about climbing the mountains?? Well that still cannot be phrased.. 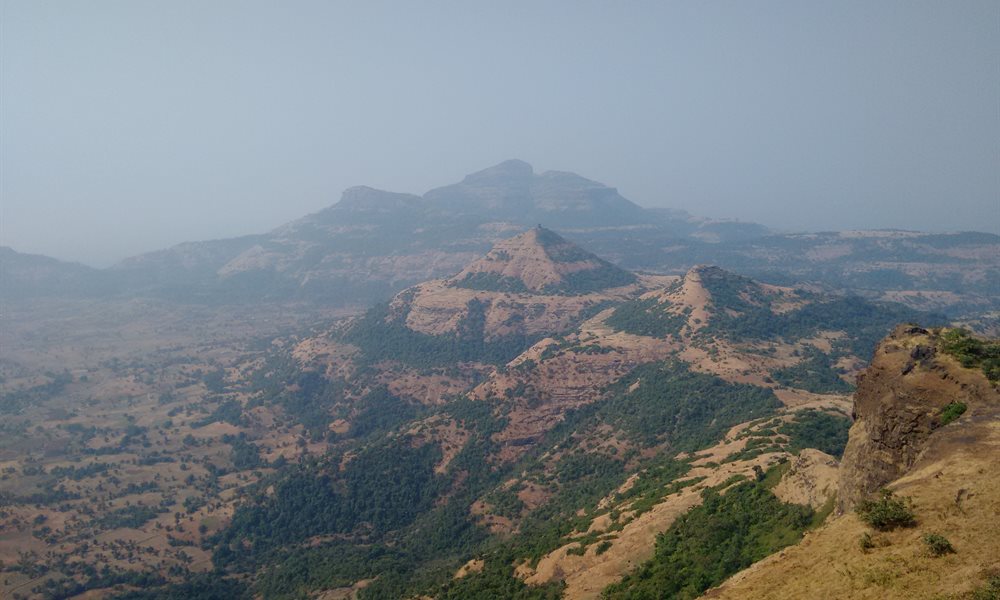 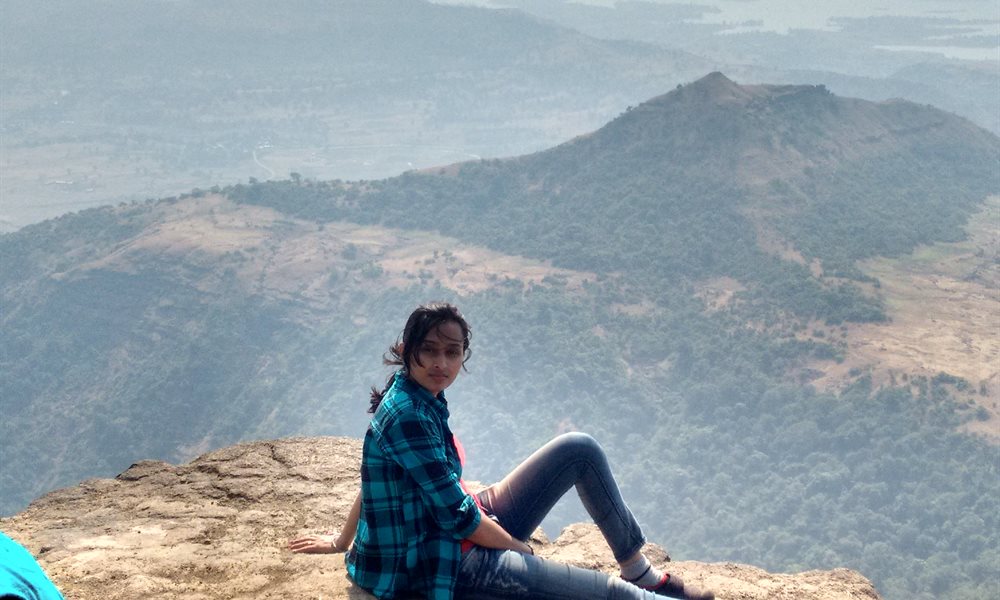 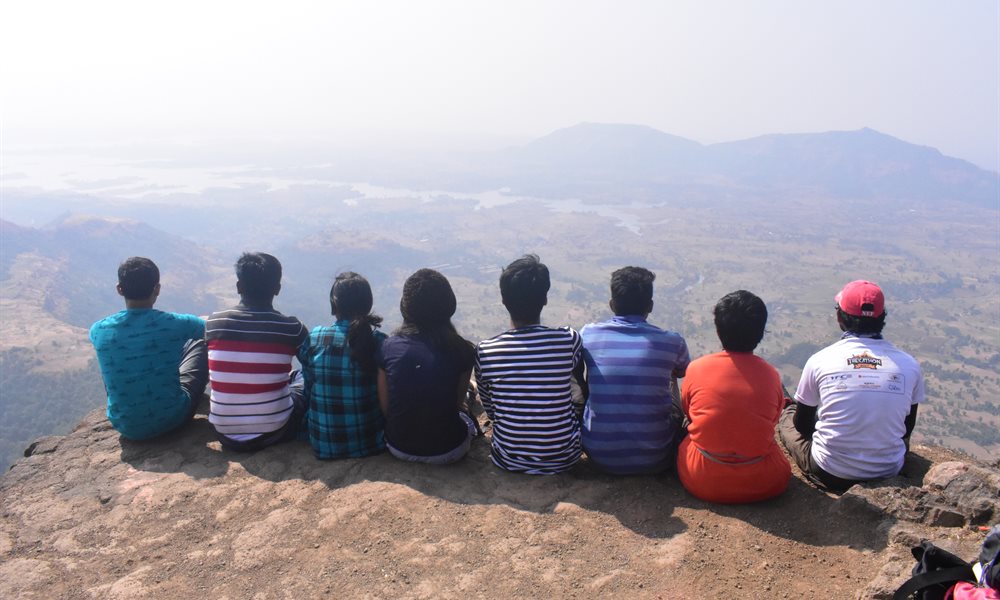 Descending down is equally awe-struckung task. Every step has to be sagged down with back facing the valley, gripping into each notch carefully, heart beats, of course abnormal, breathing heavily, with only one thought in mind that this has to be done..

Isn't it so great that you forget all your worries, sorrows, responsibilities and just think about that particular moment when on such trails?? 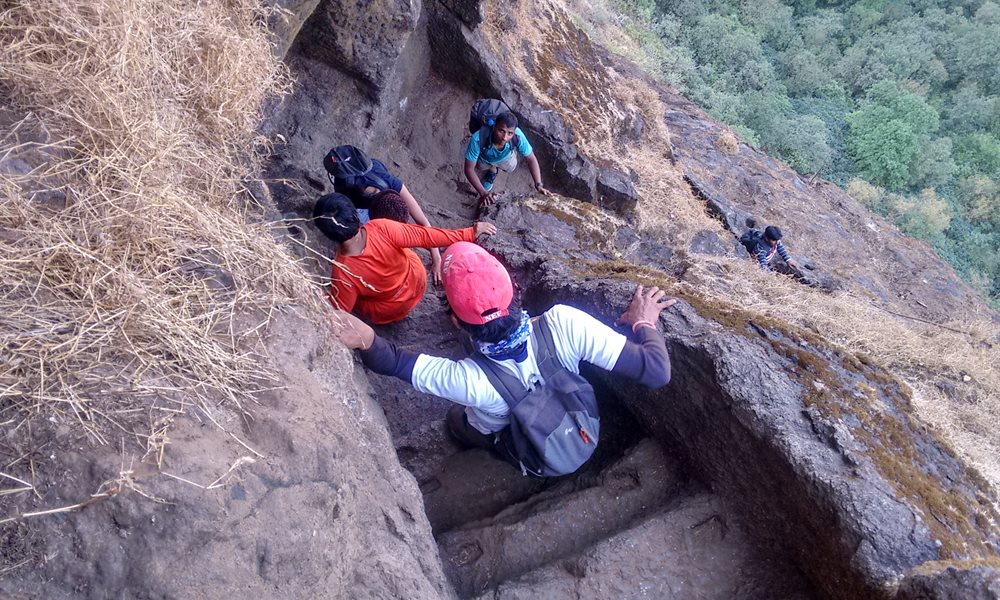 We reached the base at around 3 PM and explored little bit of the village and had a lunch at one of the home stay facility and took leave with the sweet memories that will last forever... :) 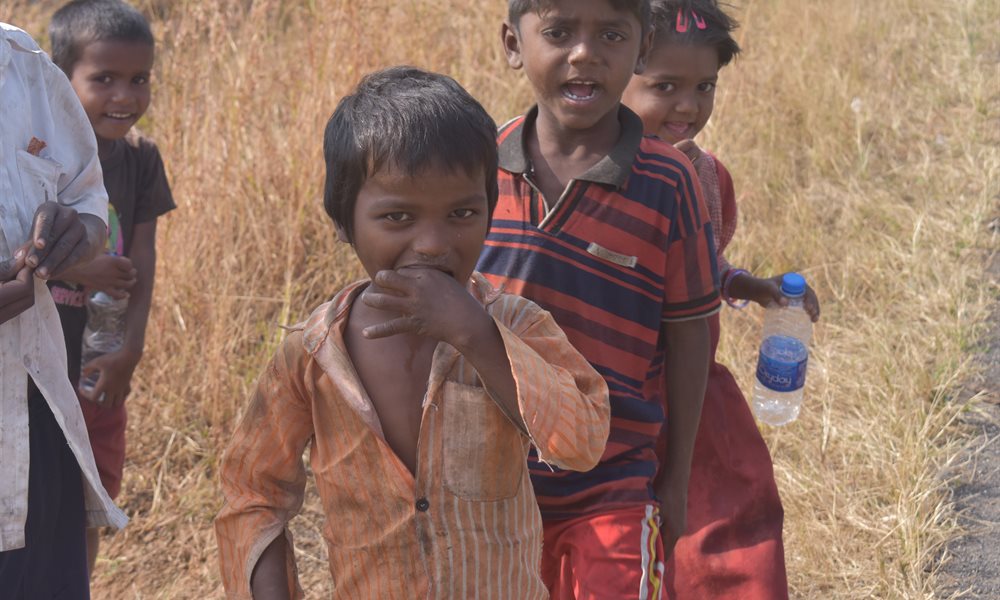 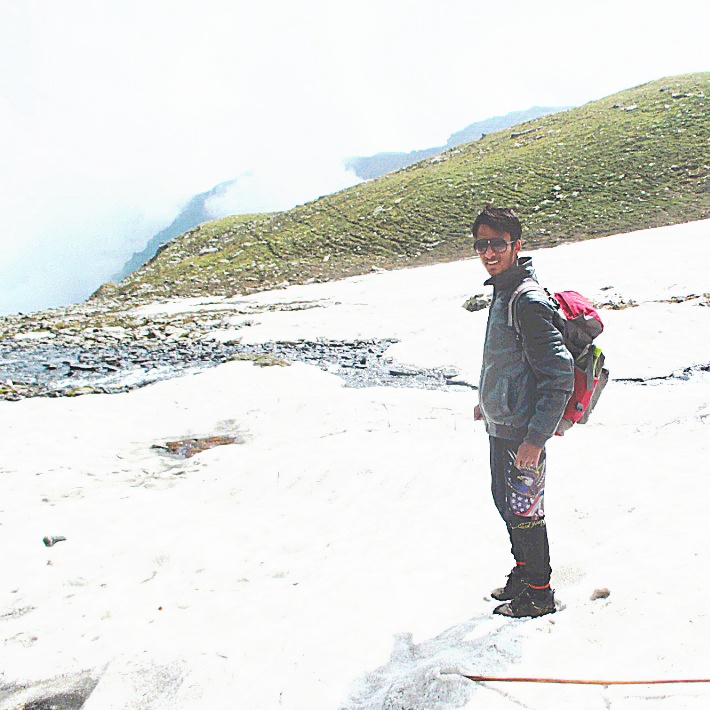