IN THE QUEST OF AN EPIC SUN-SET - KODACHADRI PEAK TREK

“The best view comes after the hardest climb”- Anonymous.

The view of the sun setting over the Arabian sea making for an enchanting horizon was very tempting not to experience this view myself.

This spectacle can be seen atop the 10th highest peak of Karnataka at an elevation of 1343m (4406ft)- Kodachadri peak, located in the Western Ghats of Shivamogga district. 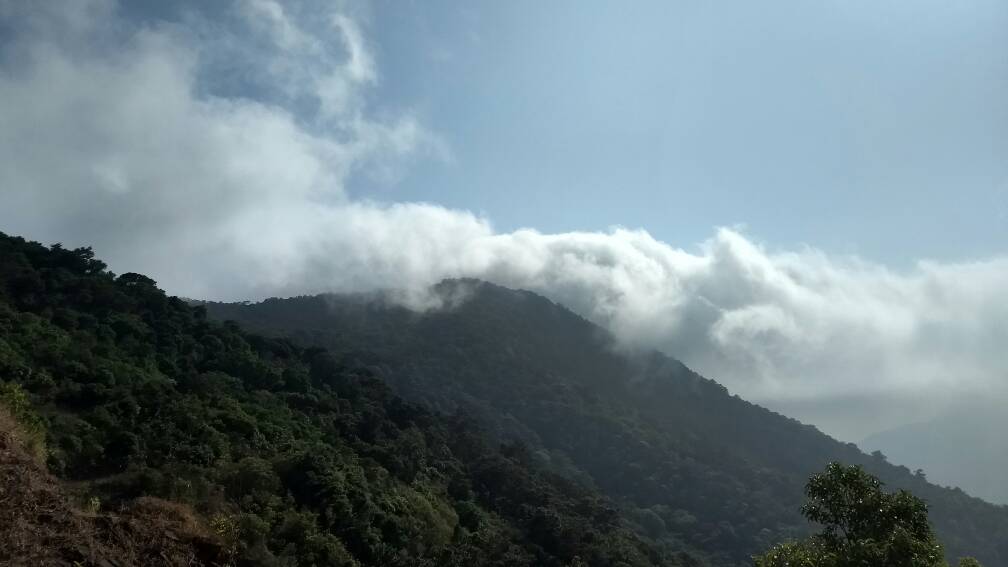 Backed with this information I realized that the peak could be reached by a 13km “moderate grade” trek. I zeroed in on a trekking group who offered the trek to this photo-worthy view.

The term “moderate grade” did not bother me much even though it was clearly mentioned under the title of –Difficulty type, I brushed it aside as I was confident with the right gear for a trek all you had to do was walk with determination towards your destination!

My first trek was in 2013 to the mesmerizing Dudhsagar falls organized by a friend’s friend who was thrilled with the falls on the movie ‘Chennai Express’ and who also happened to be a die-hard fan of Shah Rukh Khan.. I had trekked to the falls over the railway tracks in my jogging shoes!! With intense pain all over my lower limbs, I dragged myself to the falls, all the moans and groans were finally worth it for that glorious view of the most beautiful falls I had ever seen.

This time for the trek, with the advice of my mountaineering friend, I went Ga-Ga over the trekking gear and was all set for this time not to have a lack of equipment.

A pleasant fun-filled night journey with the trekking group to the home-stay at the base camp followed by a warm breakfast energized me to reach the destination for the thrilling sunset, or so I thought!!

As the trek started with a group of 20, several of them solo trekkers like me, there were two guides one to lead the group and the other to ‘sweep the back’, I grinned thinking about the unfortunate trekker who would be slow enough that the guide had to “sweep” him up the course. 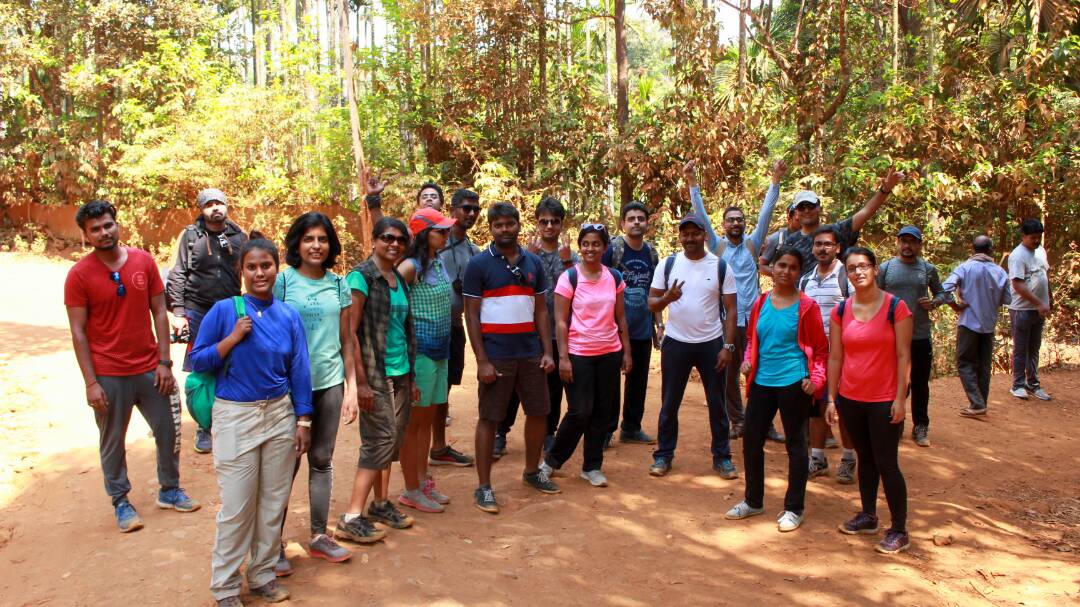 With bouncing energy I started off ahead with the lead guide on a flat muddy road which seemed to twirl like a snake sandwiched between the various hues of green of the Shola forest. 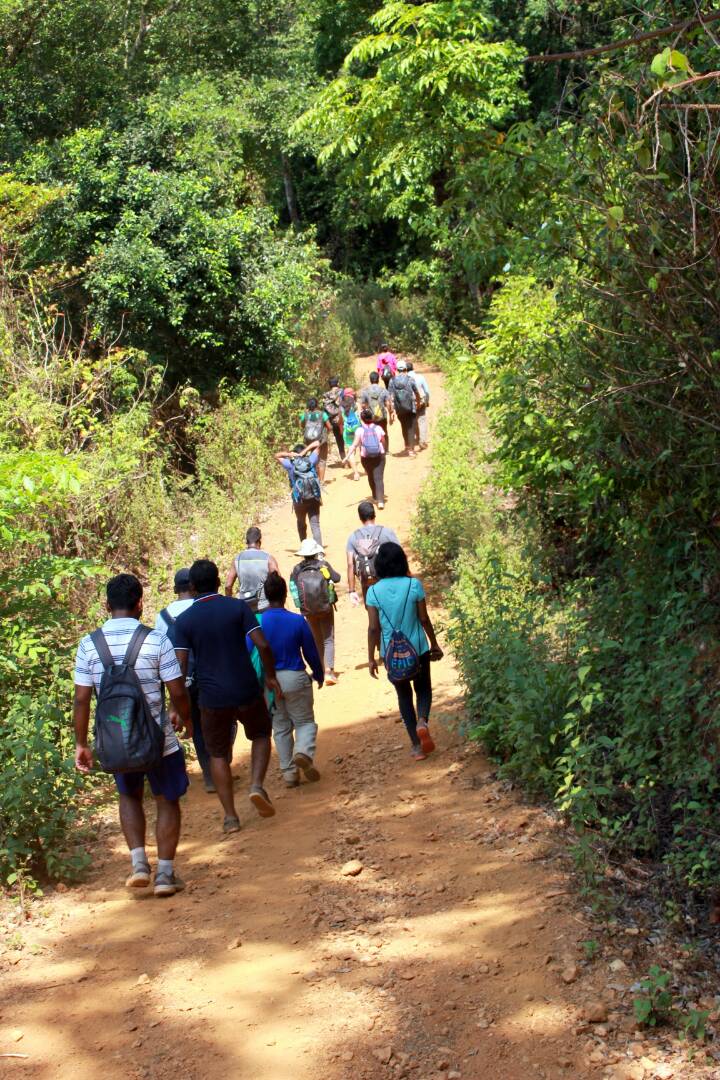 I happened to lag back from the lead group, not because I was tired, but I took my time to admire the surreal landscape of actually trekking through a jungle, I also noticed that the trekkers behind me seemed to be giggling whilst taking selfies and photos, amidst taking photos with conversations of how wonderful the Jungle seemed to be to us city dwellers! 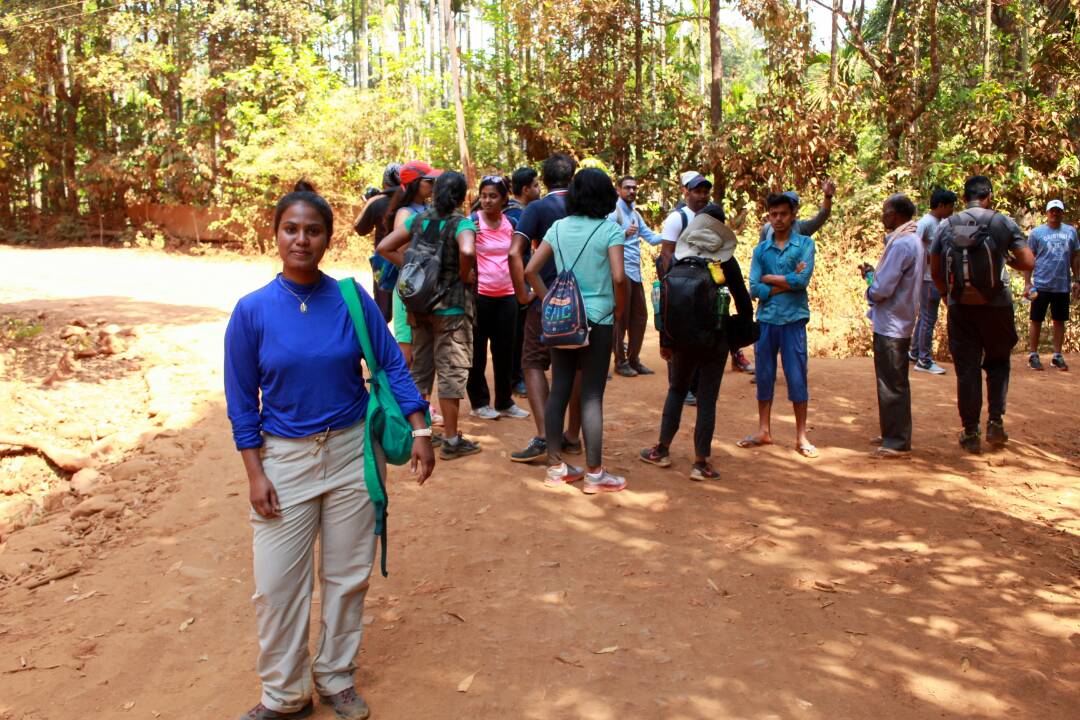 POSE FOR A PIC

We came across a small stream beyond which the road stopped and there seemed to be a narrow path across the jungle cleared of the flora and fauna perhaps from the constant trampling of trekkers. The lead guide shouted out to the group that the real trekking starts from this point. I could feel my knees slightly giving way at this point but looking ahead I was ready to conquer the emerald lair. 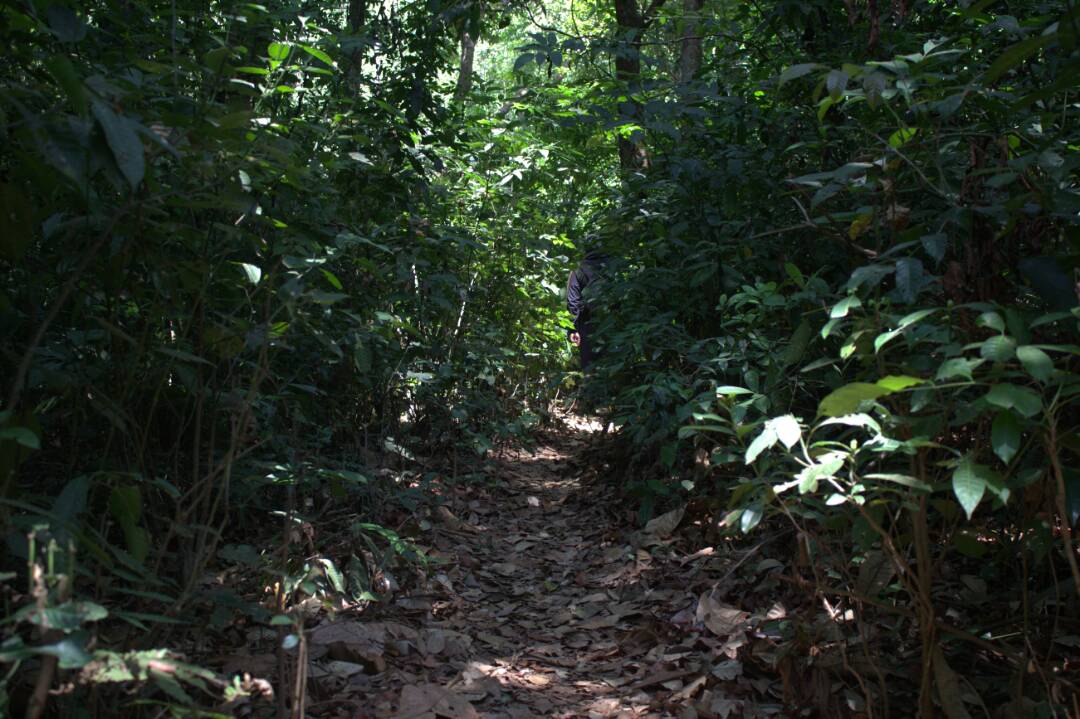 The path now seemed to incline covered all around by a green canopy. After about 20 minutes of trekking I started to consciously breathe deep and noticed my knees were starting to give way with the constant inclined climb. I was holding onto all the branches on the way to pull ahead, now I had to stop for a few seconds to oxygenate my lungs and muscles, I found myself being pushed to the back of the group, looking back no one was there, only the outdoor leader who was supposed to “sweep the back” accompanied me side by side. I realized at this point and may be even she did that I was the ‘unfortunate trekker’ requiring to be swept ahead!! Seeing both of us lag back, two of the trekkers stopped to ensure if we needed help and one of them offered me support here and there in climbing the uneven rocks and the roots of the trees which seemed to spruce about randomly the Jungle floor. 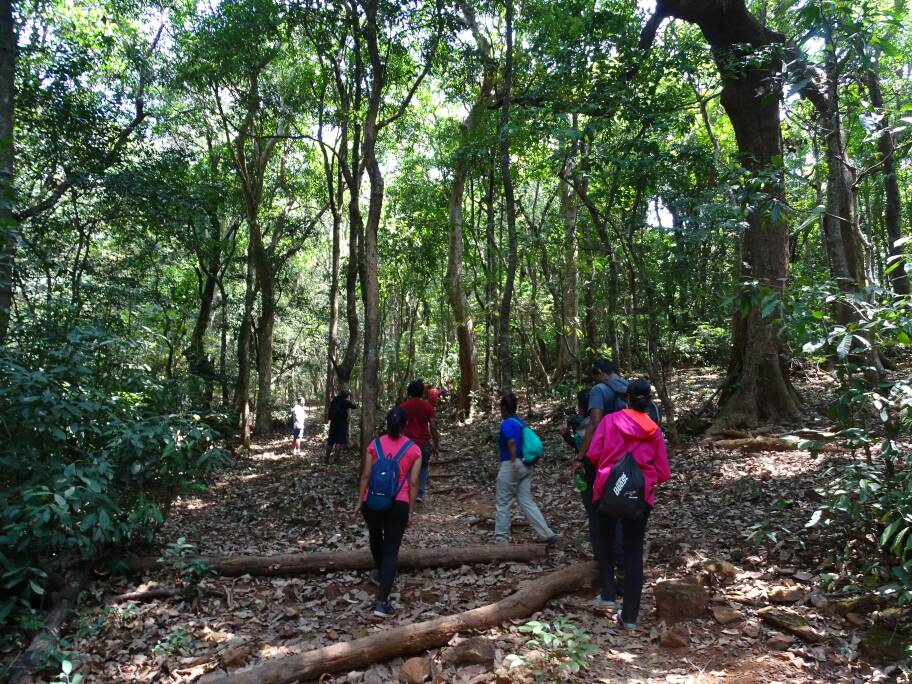 As I continued to trek, the serene greenery faded for me into oblivion and all I could think was me-myself trying to fight through this green-eyed monster who seemed to grin at me with every step I took ahead. An hour or so into the inclined path we finally reached a flat plateau where the guide assured me that a refreshing glass of buttermilk awaited, sipping on the cool buttermilk my eyes was fixed on the gigantic mountain covered with lush greenery and with the common talk among the trekkers I realized that this was the magnificent Kodachadri peak, which was not visible from the point where we started but now stood right in front of me in all her glory daring me to inch closer towards her, my eyes seemed to feast at that alluring sunset awaiting me at its peak but my knees was screaming at the treachery that it is going to be subjected to!! 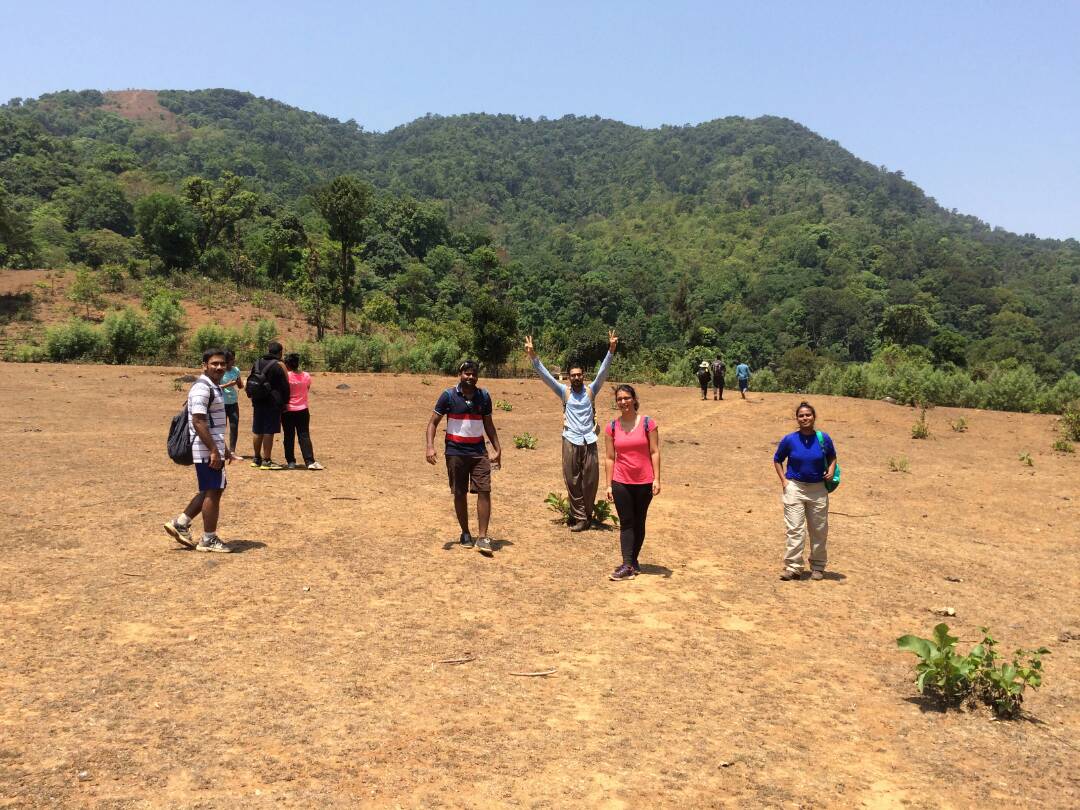 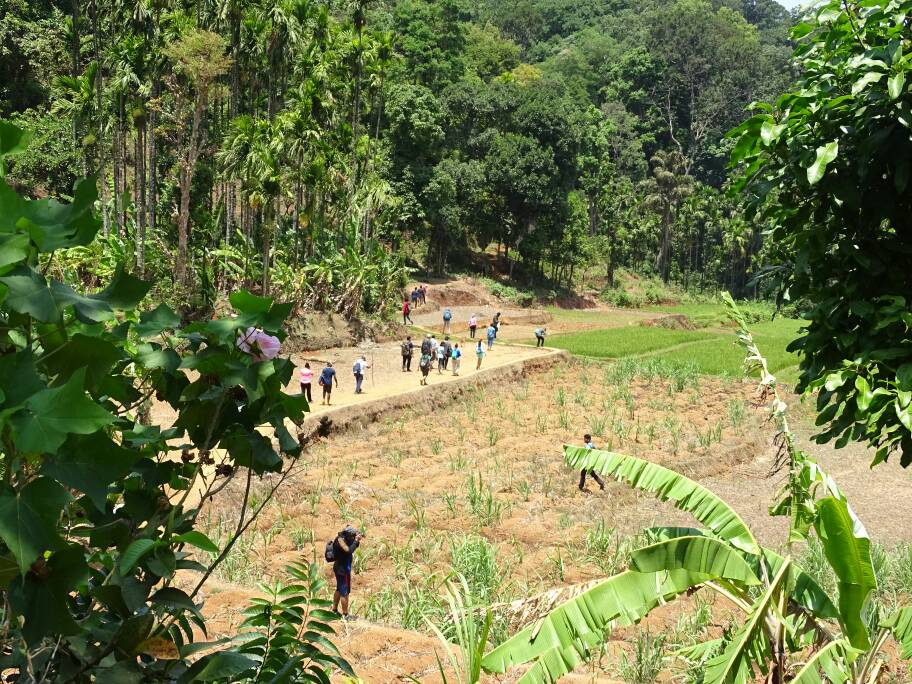 The itinerary from here was to trek the Hidlumane waterfalls which was en-route to the peak and then trek further for lunch at the forest guesthouse and then a final lap of trekking to the peak. Off we started again from the plateau towards the peak through the Jungle, and as usual I set out with the leading group, knowing that in some time I will lag behind!!

The monotonous incline was getting to me as I had to stop to breathe and also give my pressured knees a break, finally we reached a path spruced with big rocky boulders  which happened to be the path of the waterfalls, knowing that we were inching closer to the falls my muscles seemed to be yearning towards reaching it, a break in the monotonous inclined trek to scaling the tricky boulders of rocks was refreshing as I managed to scale the rocks myself, climbing higher I could see small streams of water trickling down, this sight energized me to continue in the same fervor to reach the falls. A final rocky navigation and behold I reached the Hidlumane waterfalls, I quickly removed my trekking shoes and immersed myself into the chilly waters which showered from above, it was not a full stream as it being summer the water level was reduced but it was enough to cool my sore muscle and activate my sympathetic system for the Adrenaline release which I would need further in the journey. 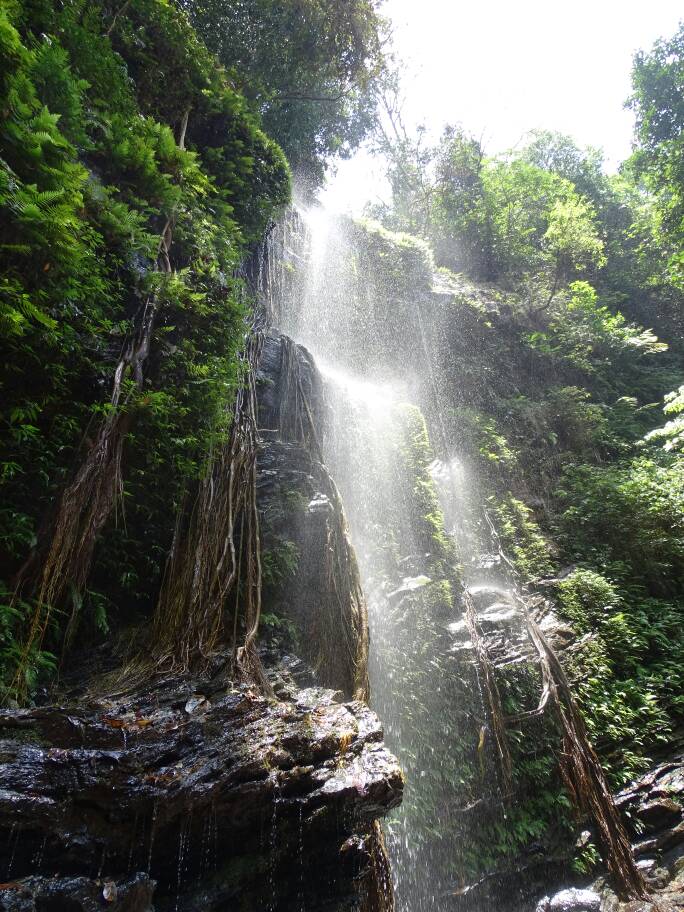 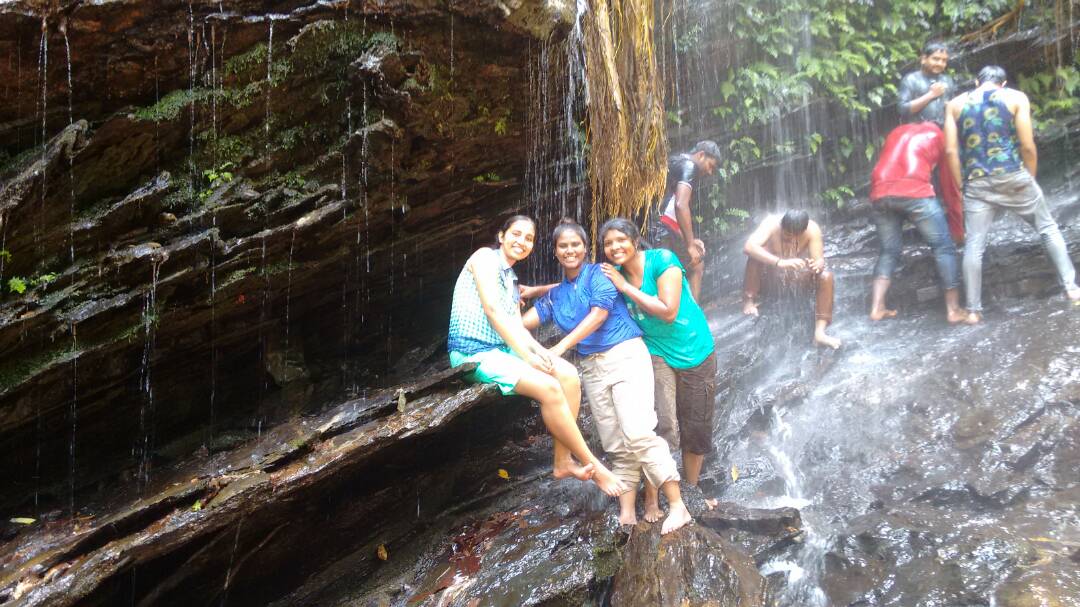 FUN TIME AT THE FALLS

With the adrenaline surge from the relaxing dip I set off ahead again. I could see the trekker ahead of me and behind me, I had to stop again to breathe deep, the trekker ahead of seemed to quickly disappear into the thicket, I set off and cleverly scaled a big boulder, the trekkers behind me took their time to scale through it, I went ahead to catch up with the trekker in front, trekking ahead a little distance I realized that the trekker in front of me was far ahead and I was far ahead of the trekkers who were behind me, it seemed to me I was all alone in the jungle, this moment seemed surreal and I just stopped to examine around…I was right in the middle of the emerald lair, it seemed untouched by human profanity existing harmoniously harming no one, suddenly I could see the path behind me creek and a shadow fast approaching towards me, I froze and almost skipped a heartbeat only to see my fellow trekker catching up with me, I was very much relieved to see him. 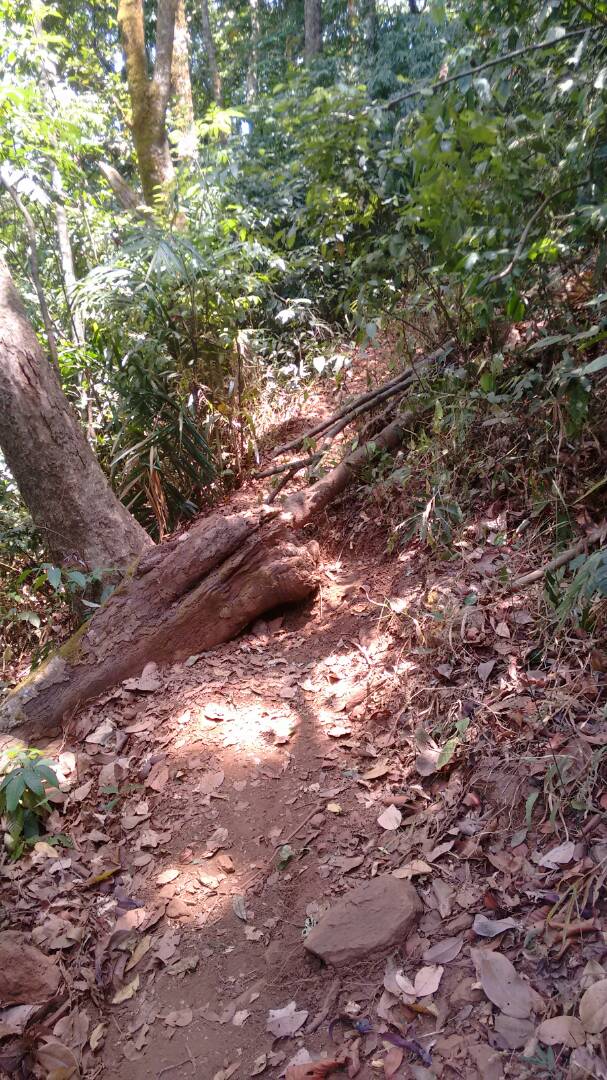 The journey continued and we exited the thick canopy onto the bare peak of the mountain. A steep trek which seemed to be the hardest part of the journey, in the sweltering sun I tried not to look up but only looked down focused on the next step to take, looking back I was thrilled to having come so far but looking ahead the achievement gained so far seemed miniscule to the distance left ahead. On reaching the top there seemed to be a descent followed by another grueling peak to be covered!!. I asked myself was all this exhaustion, bodily pain and mental fatigue worth it? 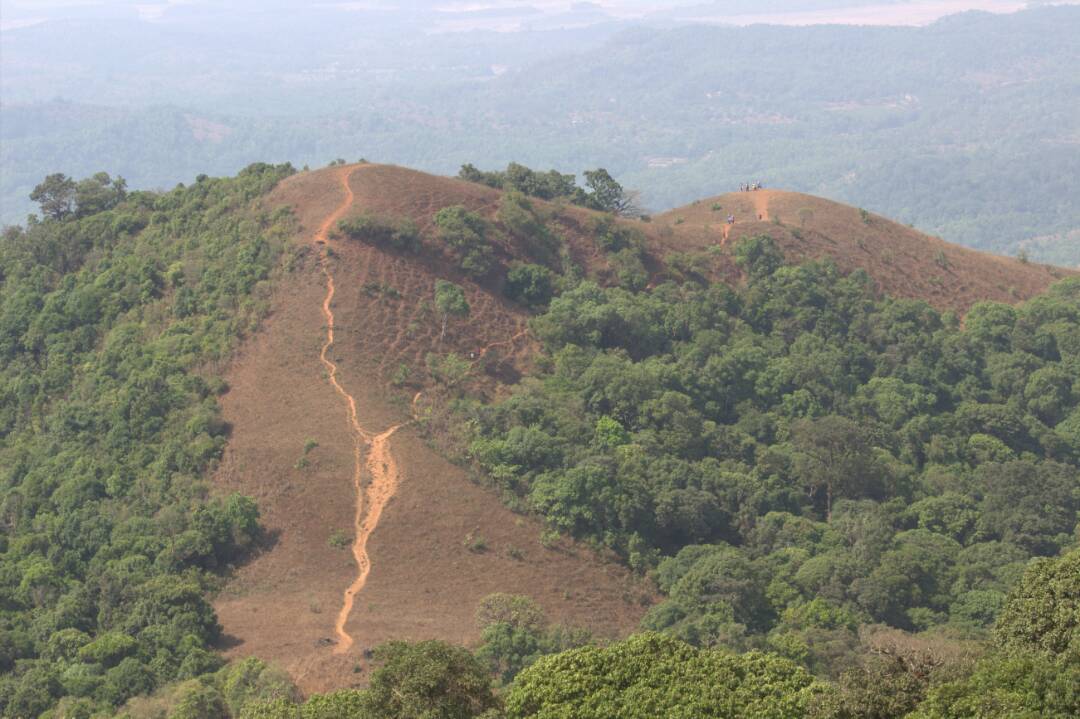 THE UP’S AND DOWN’S ON THE TREKKING TRAIL

I was determined to complete the trek and decided to complete it at my own pace, the trekking group was very supportive as they never left me behind and encouraged me all the way. 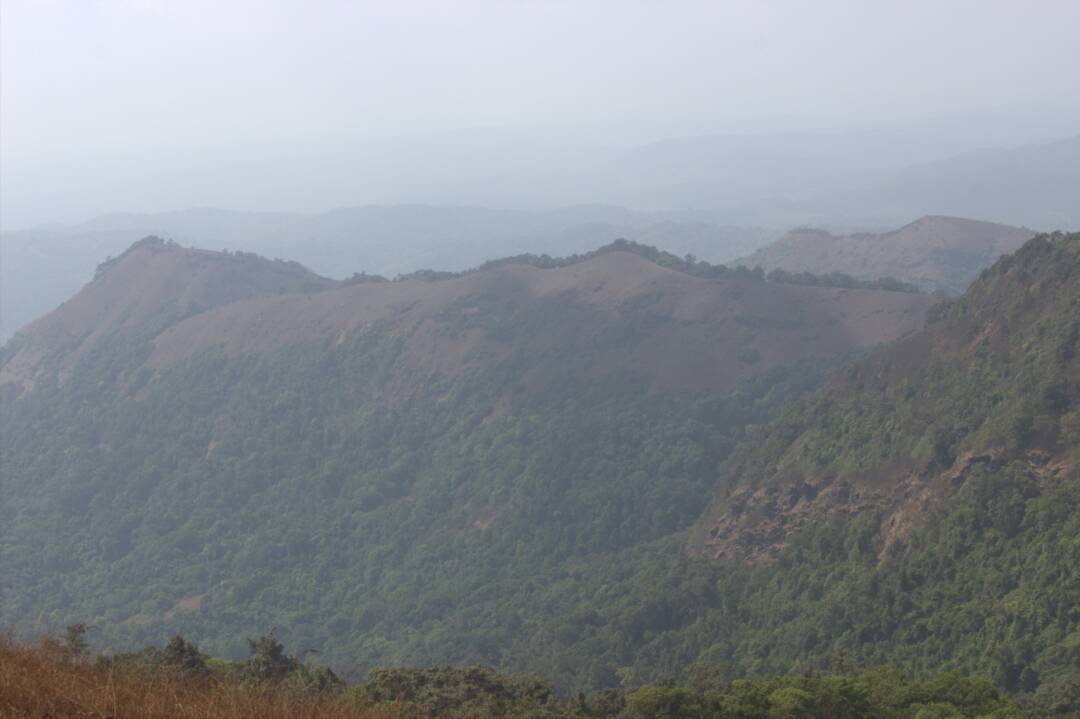 VIEW OF THE MANY PEAKS OF THE WESTERN GHATS

Finally I reached the forest guesthouse and had one of the most delicious simple meals in a long time which seemed to quench my exhaustion. After a period of rest we set out for the final 2km stretch trek to the peak, as we started I was hit hardest at the steep inclines as I ascended the view seemed to enliven me as I could see as far my eyes could many a peaks of the Western Ghats and looking ahead the clouds seemed to descend on me this experience was breath-taking of having to walk amidst the clouds a final narrow path the side of which led down to the steep valley below and I could finally see the peak with the last painful steps I made it to the peak around 5:30pm. 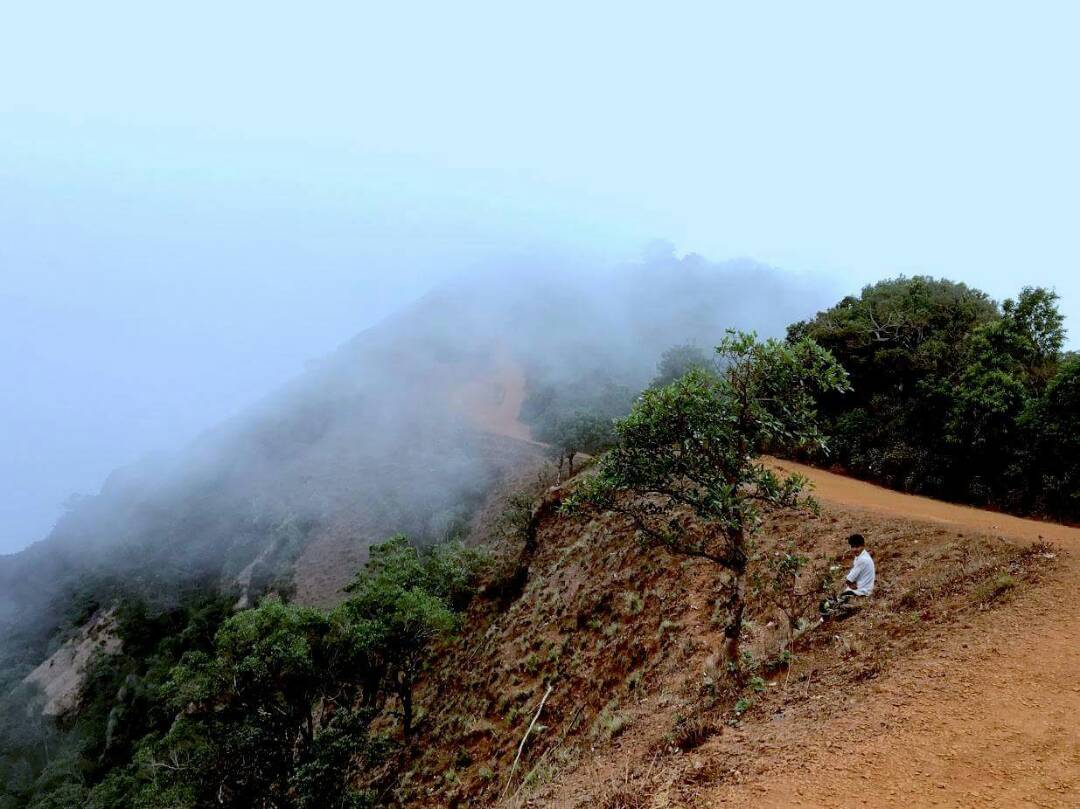 CLOUDS ASCENDING TOWARDS THE PEAK 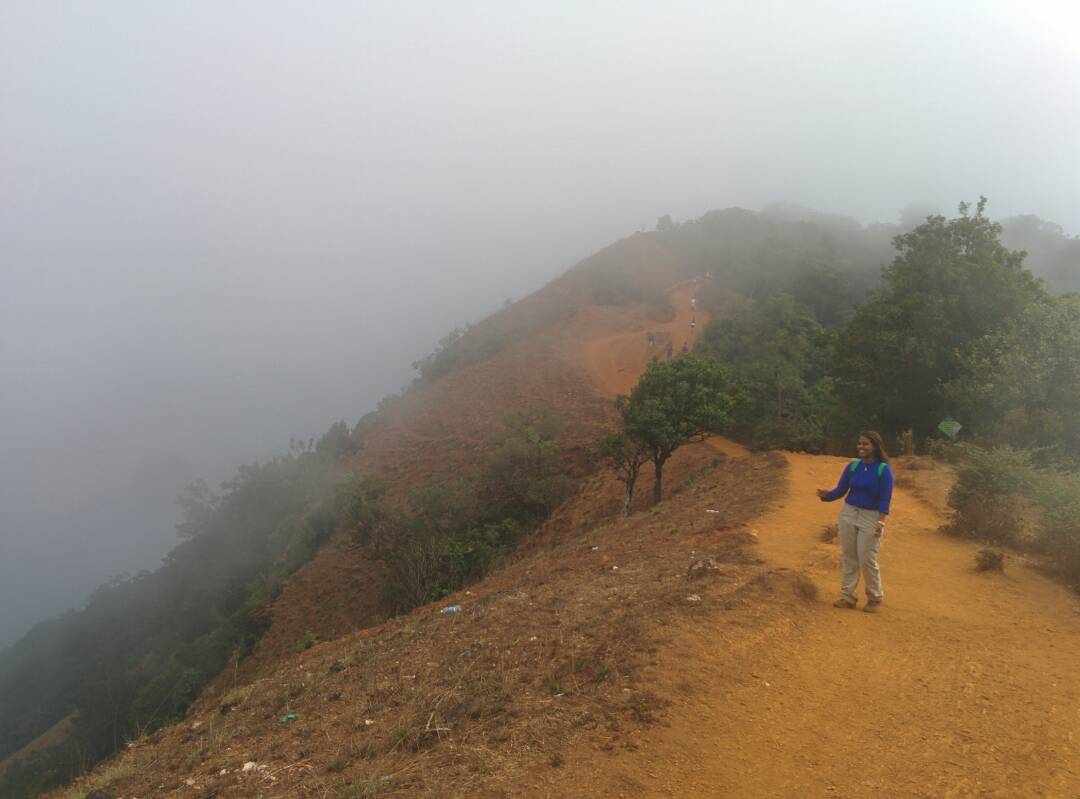 WALKING AMIDST THE CLOUDS

As I sat with my fellow trekkers on the peak trying to gaze at the sun setting over the Arabian horizon, the evening turned out to be quite cloudy not allowing to witness the enchanting sun-set. Although I did not get to experience the epic sun-set, a sense of achievement befell me as this trek happened to test my body and its fitness levels and has ear-marked a host of goals to achieve. 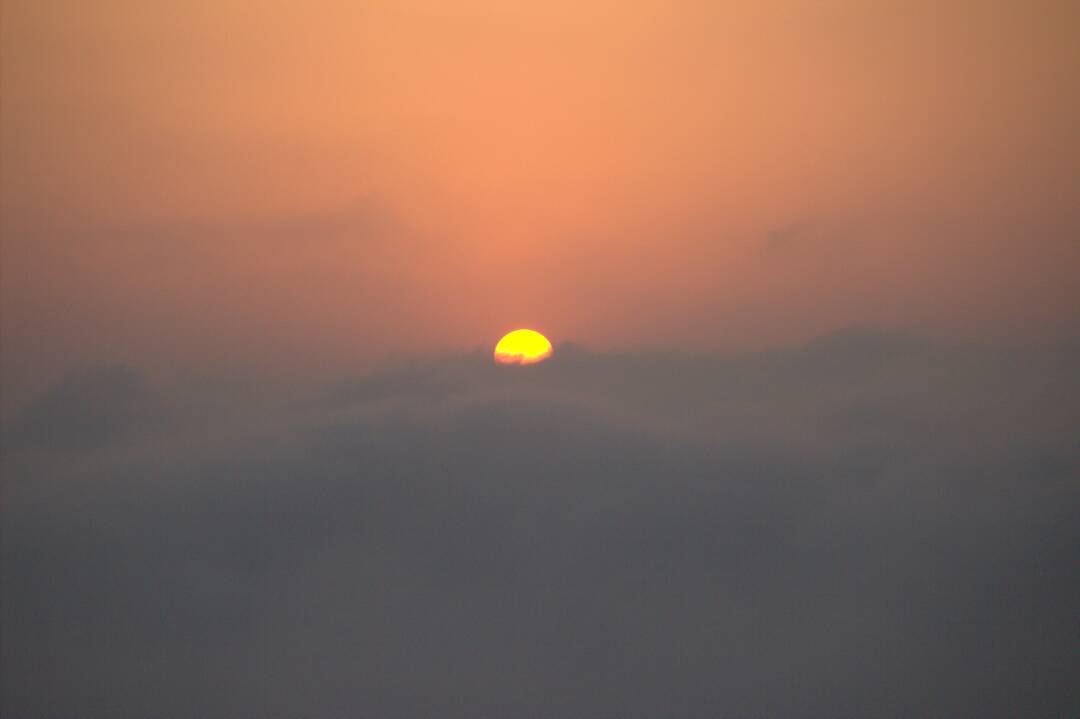 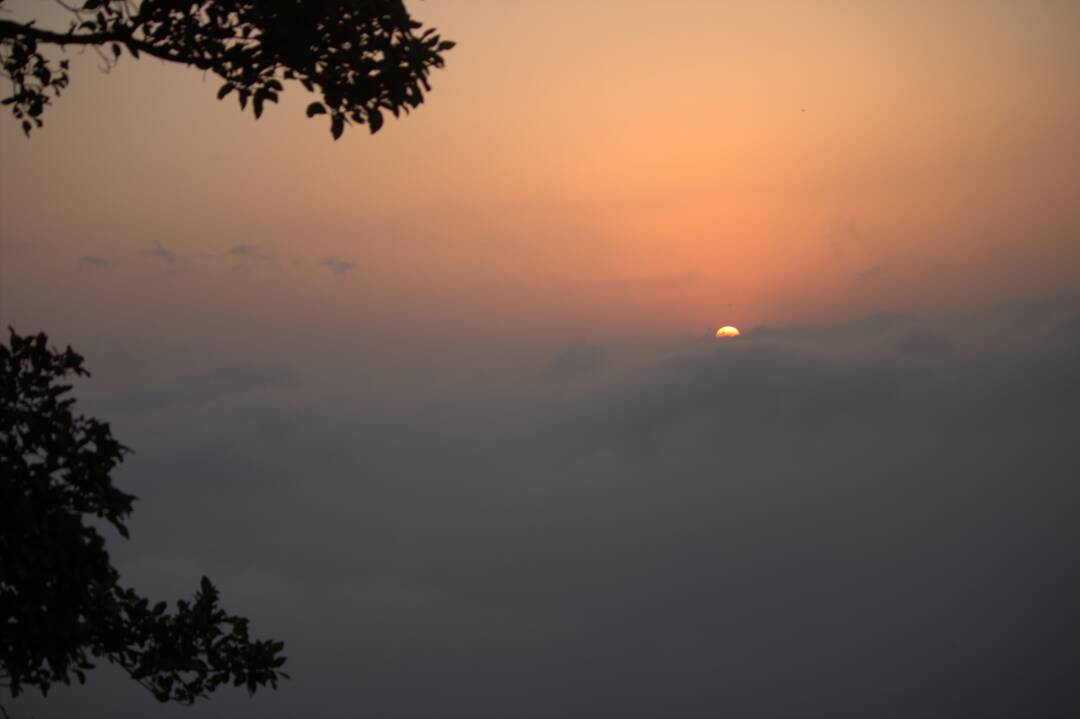 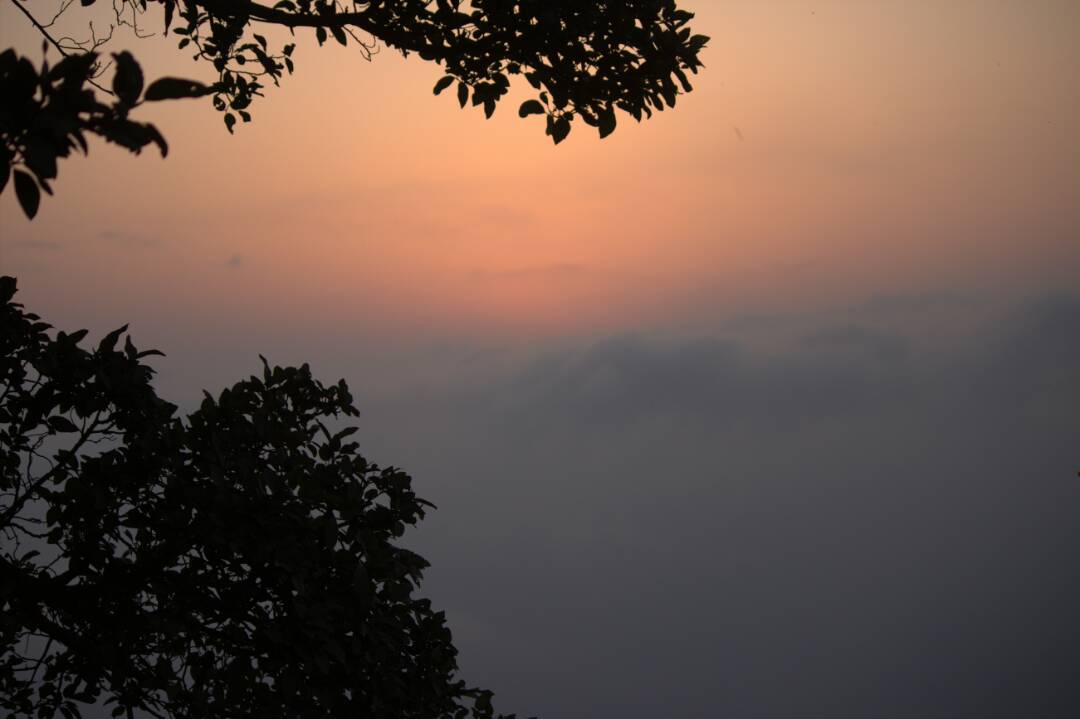 Next time I’d better consider seriously the difficulty level of a trek and prepare accordingly, but having completed successfully this trek, I think I have graduated from the current level to a higher one….. I will come again on this trek in the quest of the enchanting sun-set I could not see!! 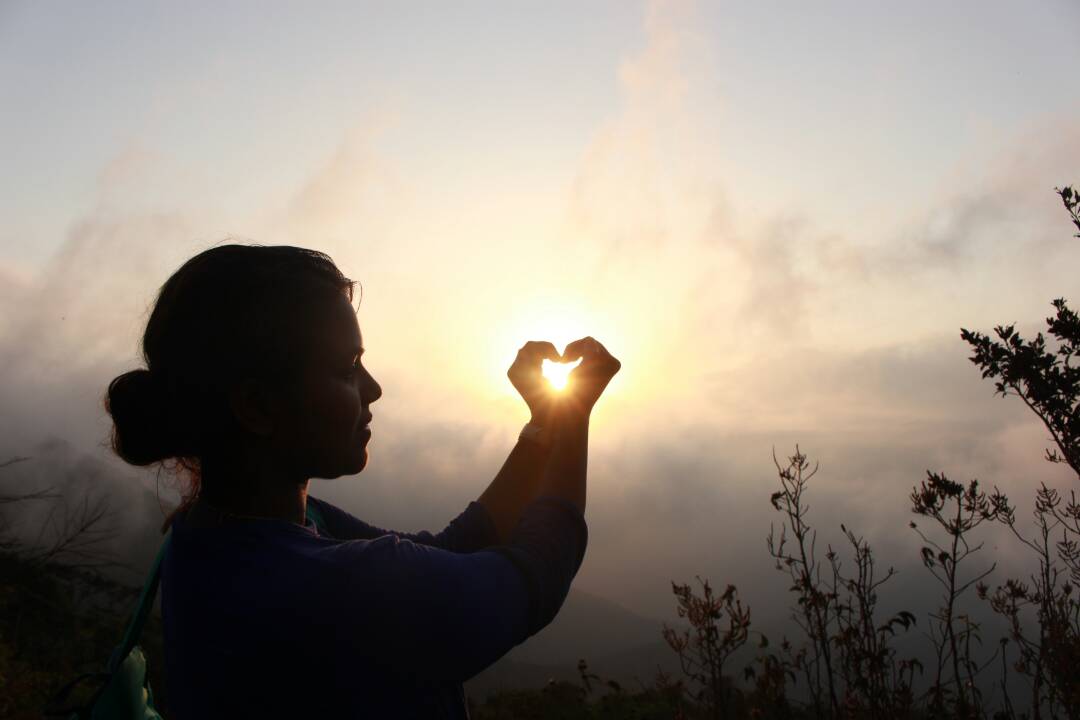 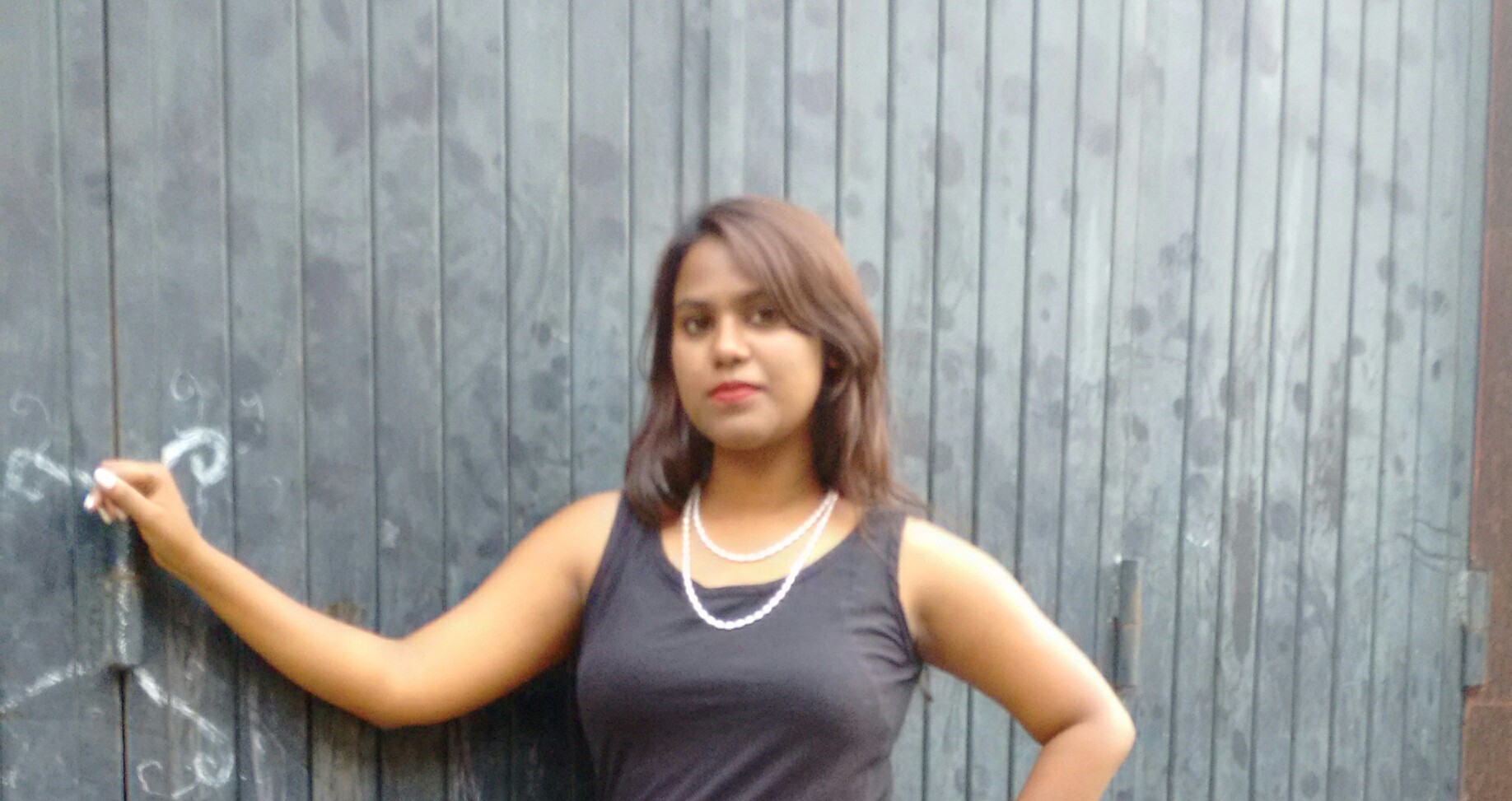 Life can get very monotonous at times, so I'm always on the lookout to break the monotony and make m Read more