Of the skeletons and snow...

Imagine a frozen lake which, upon melting each year, reveals the unnerving sight of the mortal remains of hundreds of people? Covered in snow and surrounded by rocky glaciers, the Roopkund lake appears to be a typical, albeit beautiful, natural wonder. However, during a couple of months when the snow melts and the bottom of this shallow lake is visible, the lake reveals its true nature. At the bottom are hundreds of human skeletons – and how they exist there is a mystery! Efforts have been taken to determine their identity - who were they, where did they come from, how did they die?, But the questions remain unanswered, and the lake is often referred to as Skeleton Lake.

Skeletons by the frozen Roopkund Lake 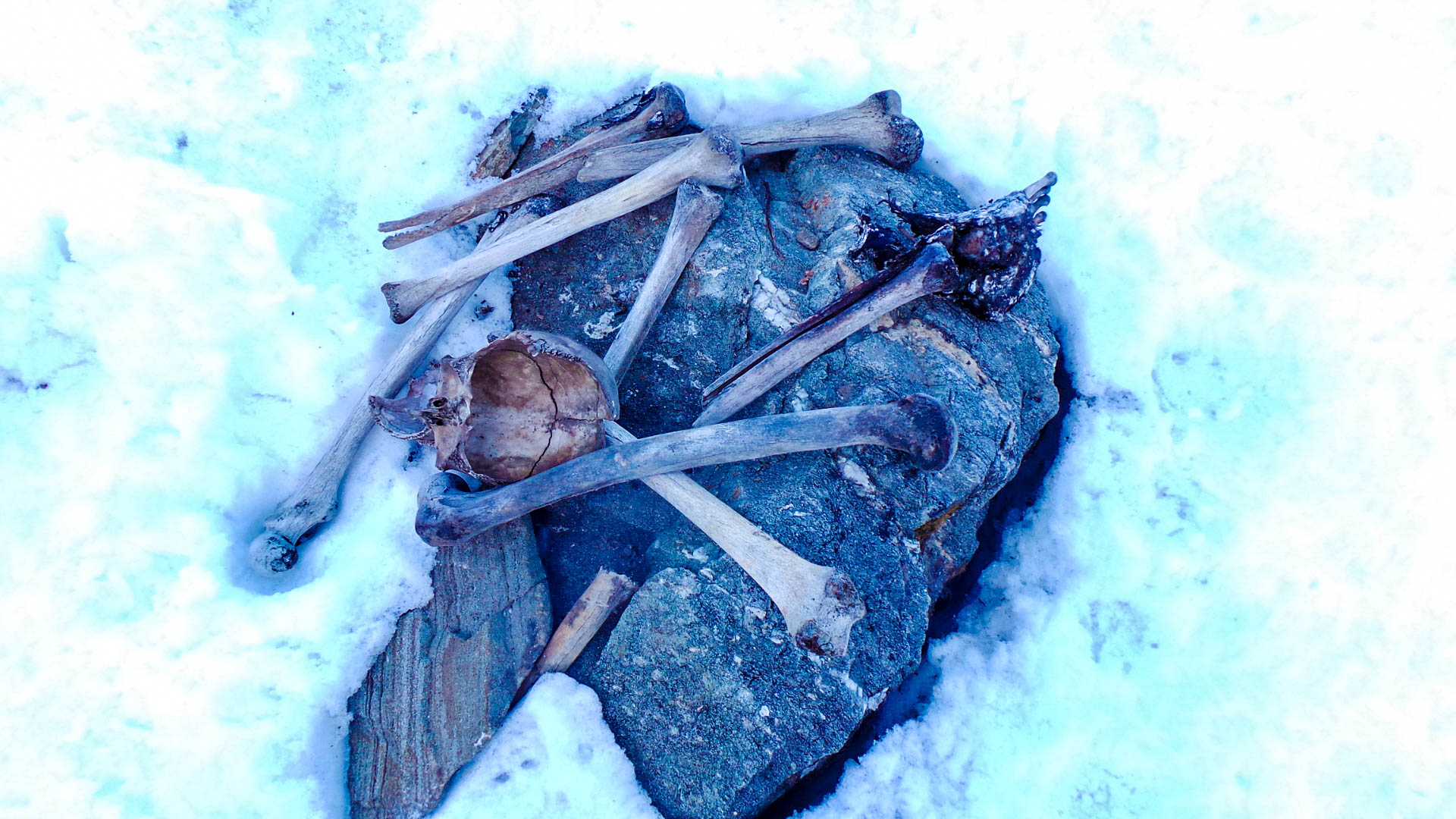 I planned to witness the mystery around this high altitude lake and booked my trek through Bikat Adventures (my third with them in 2016). Roopkund sits high in the Indian Himalayas of Garhwal, about 15,800 feet above sea level. It usually takes 6-7 days to complete the trek. The trail passes through villages tucked deep inside oak and rhododendron jungles and streams. And with an ascent to 11,000 ft once the tree-line recedes, the famous alpine meadows (locally called bugyals) of Ali and Bedini come into view. Mighty Himalayan peaks peep from behind these endless grassy slopes. Further up on the altitude scale, the barren rocky landscape, coupled with snow and ice, ignites an adventurous mind.

The way to Lohajung snakes through tall oak trees

The journey started from the tiny Kathgodam village where we boarded an SUV for Lohajung village. The group consisted people like me, who wanted to escape from their corporate routine to wilderness; and one father-daughter duo all the way from Thailand! As the vehicle meandered its way through the snaky roads of the hills, we introduced each other and were looked forward to the coming week of adventure.

Our group, all ready to set off for the trek from Lohajung guest house 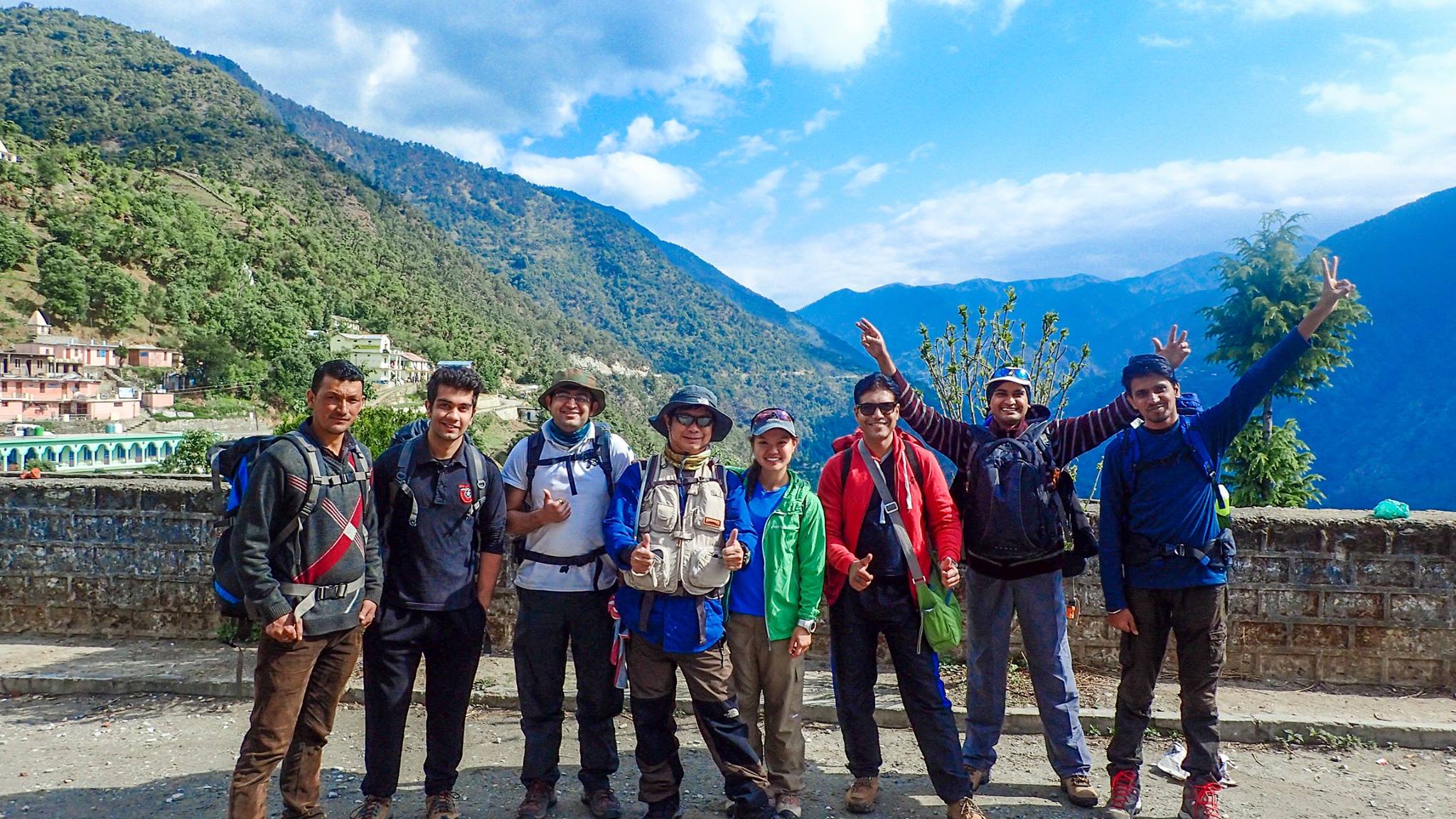 The itinerary with Bikat Adventures has an advantage as it starts from Lohajung to Didna village which has gradual ascent as compared to route that start from Wan village and go to Gheroli Patal. We set camp ahead of the village at a small clearing called Tolpani as our campsite on day one.

After half a day’s ascent, our tired legs were happy to welcome the sight of this quaint Didna village 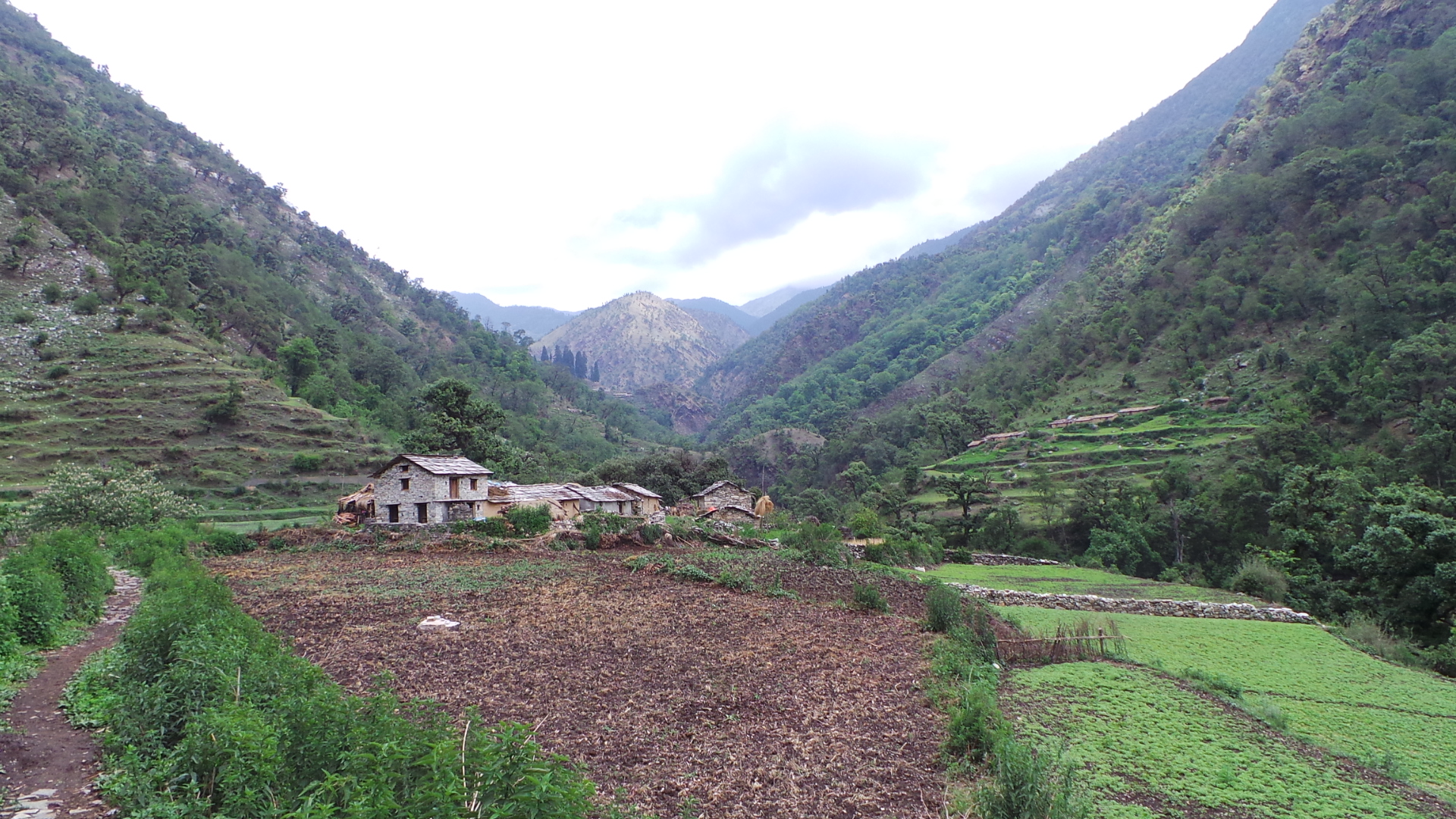 Our lone campsite at Tolpani surrounded by a solid green cover! 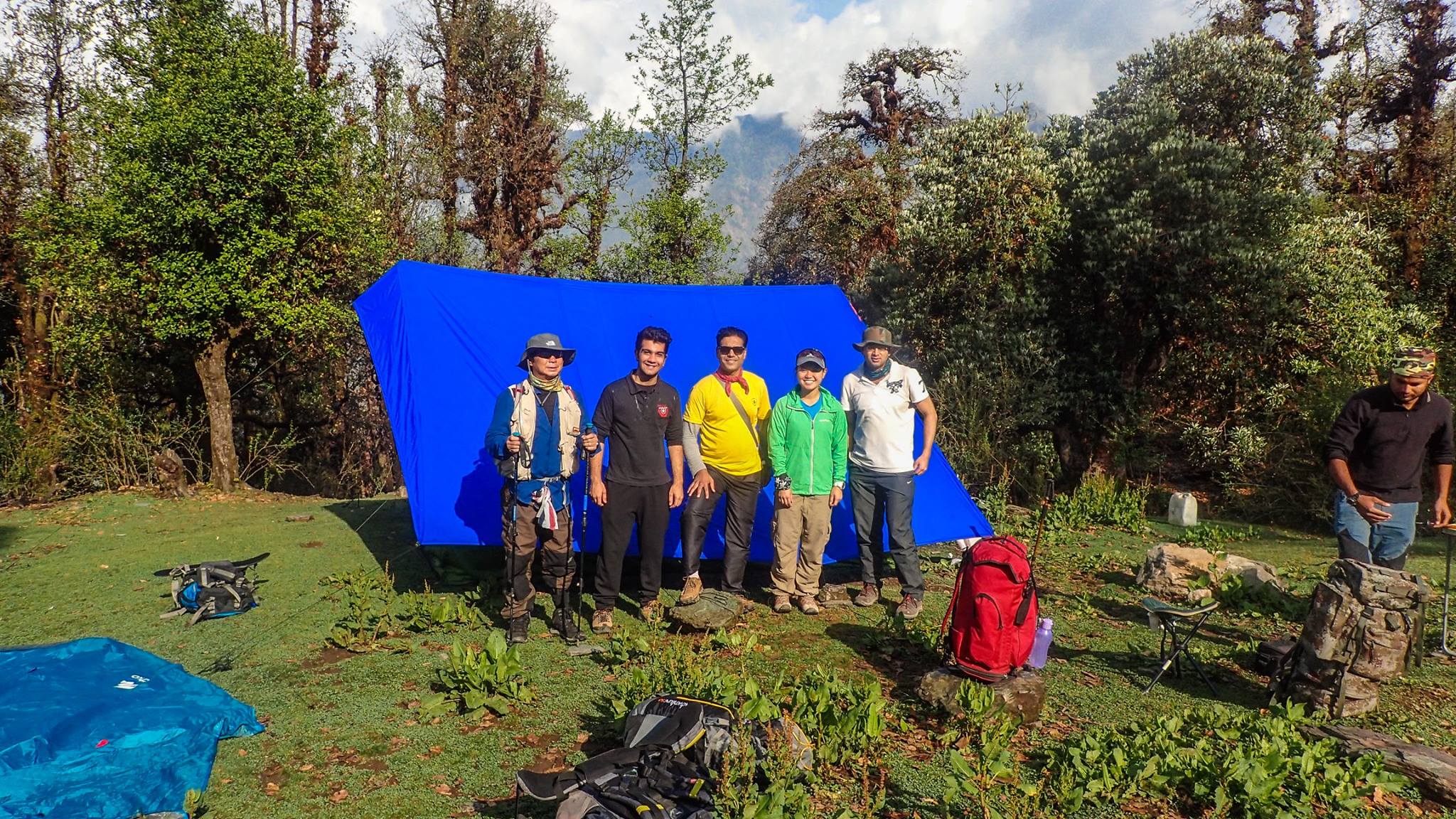 We welcomed day two of the trek with rainfall. We enjoyed our walk through the dense oak forest full of mist; and dense foliage of green and brown leaves, as the seductive smell of moist earth hung heavy in the air. Day two was the longest ascent and the rainy weather only added to our hardship! But the lovely misty view of the mountains and the grasslands of Ali and Bedini Bugyal made it worth the effort. The pitstop for Maggi noodles and chai at the solitary tapri in the desolated region was unexplainably comforting!

Making our way through the misty oak forests 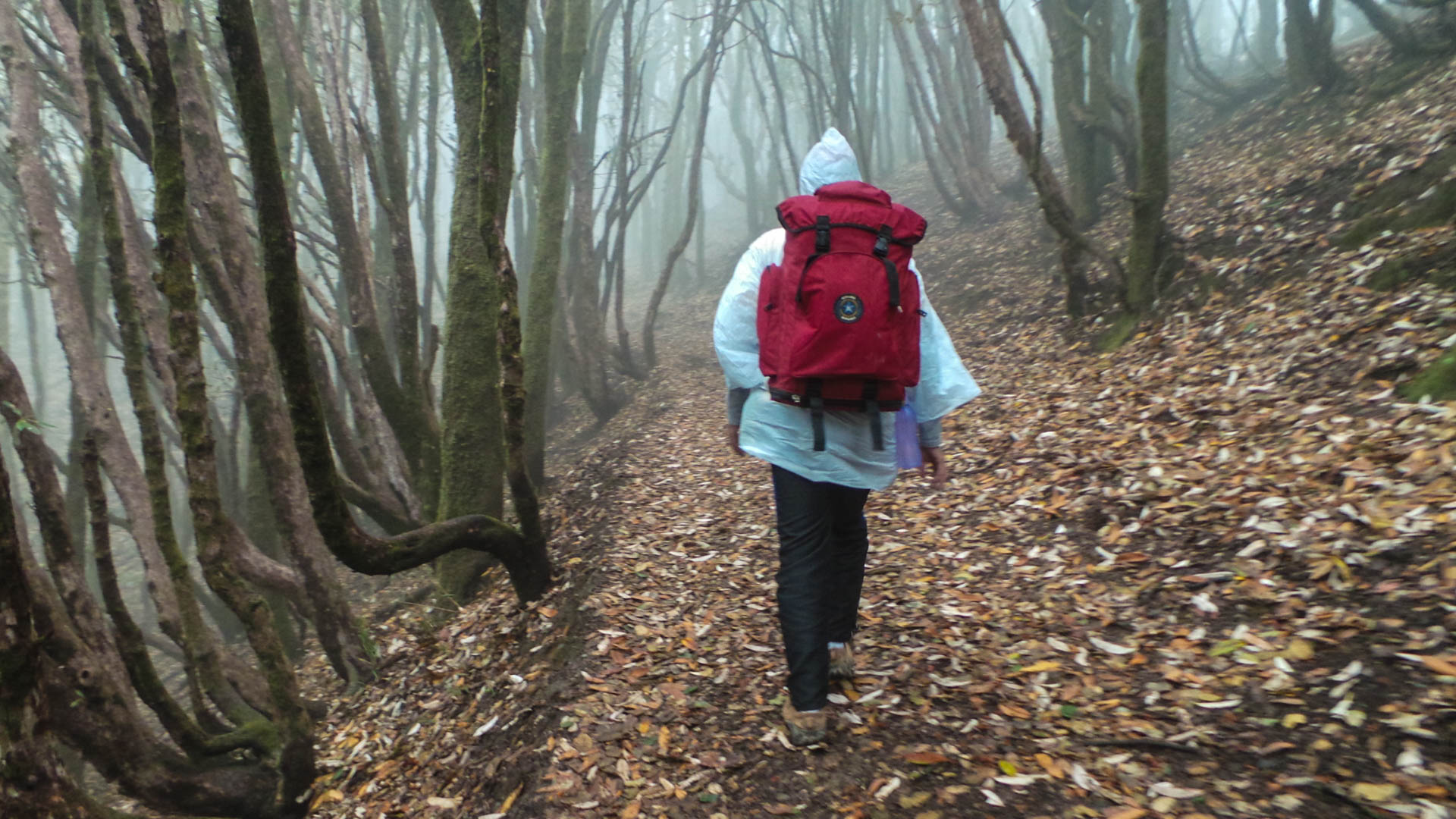 The group, about to hit Ali bugyal with nearly zero visibility! 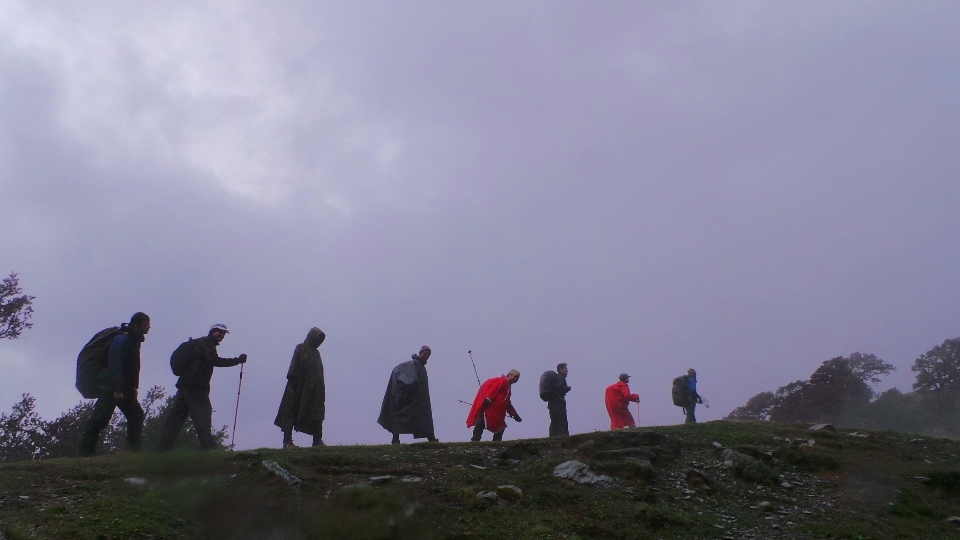 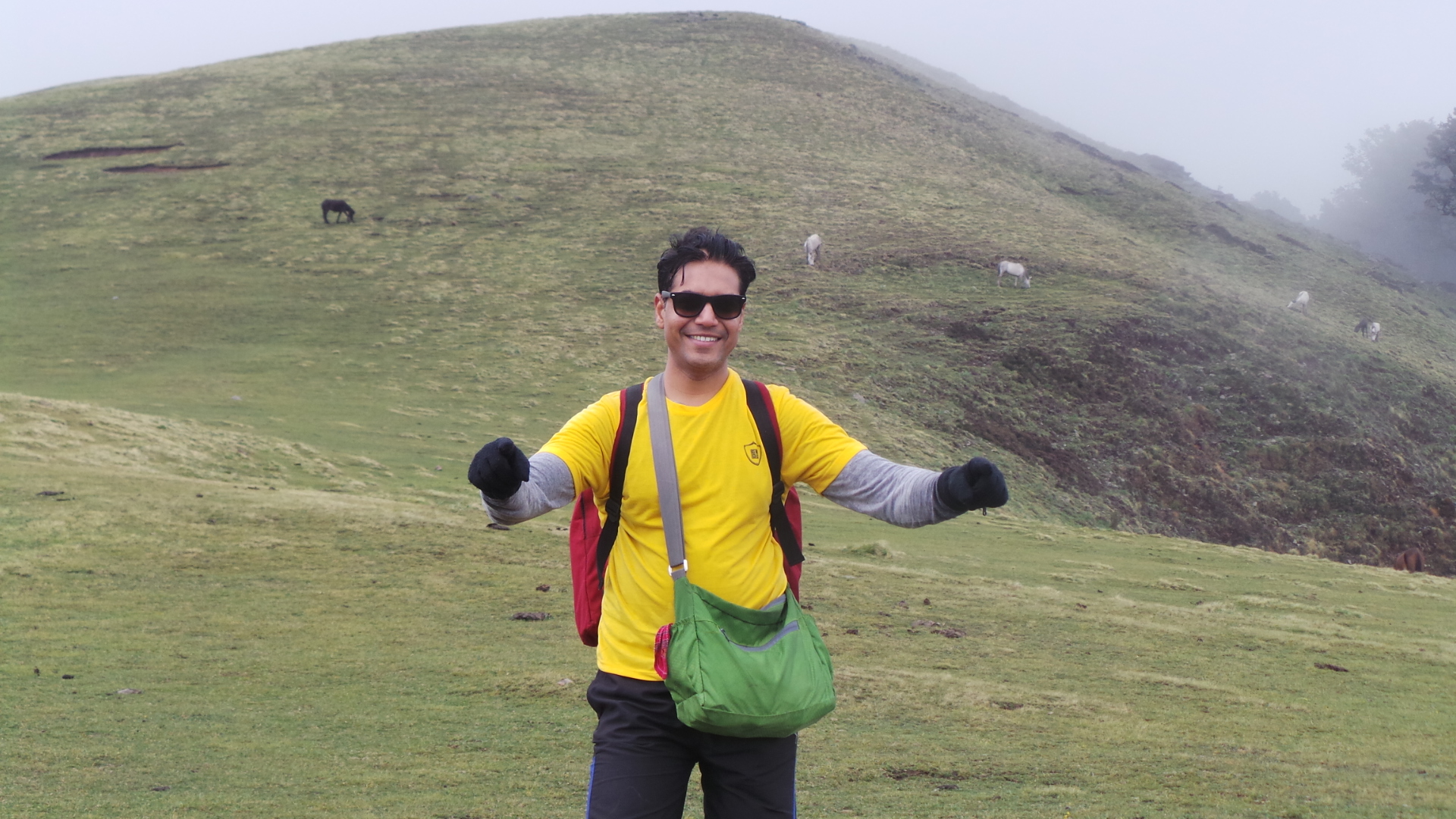 Small group size helped us to negotiate today’s hike, making it easier for our trek leaders to coordinate since we were amidst dense foggy trail. This is another advantage with Bikat as they only take small groups. We reached our campsite at Patar Nachauni by late afternoon and relished the hot tea and pakoras. It was much needed and most welcome, as we were drenched and tired after the day’s trek. The evening was fun as we played card games and talked about life and philosophy, helping us bond better as a group. After an early dinner, trek leader Wakeel briefed us on various mountains hazards and how to cope with them. 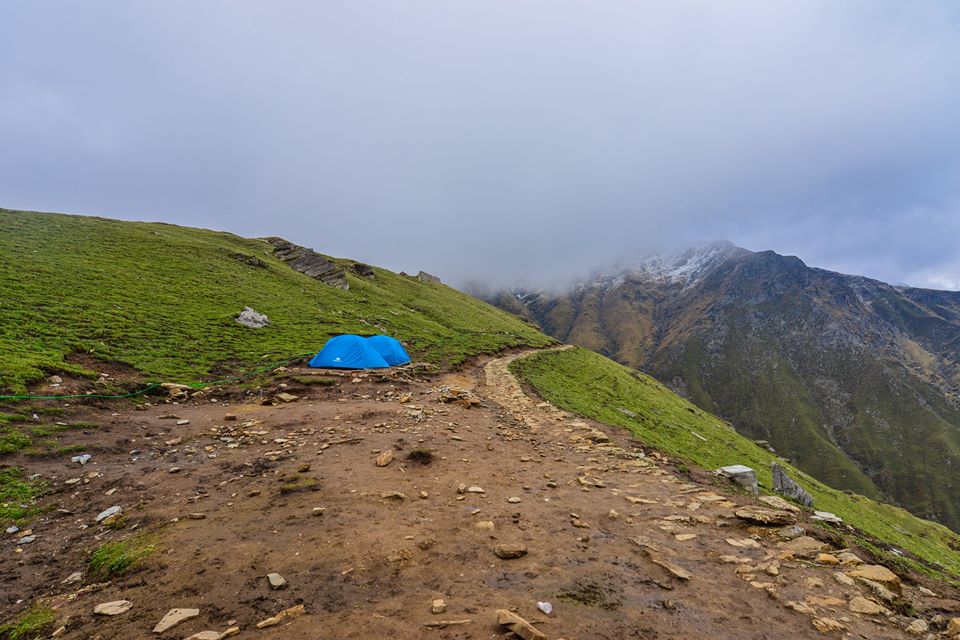 The hot pakoras disappeared in minutes inside this common tent! 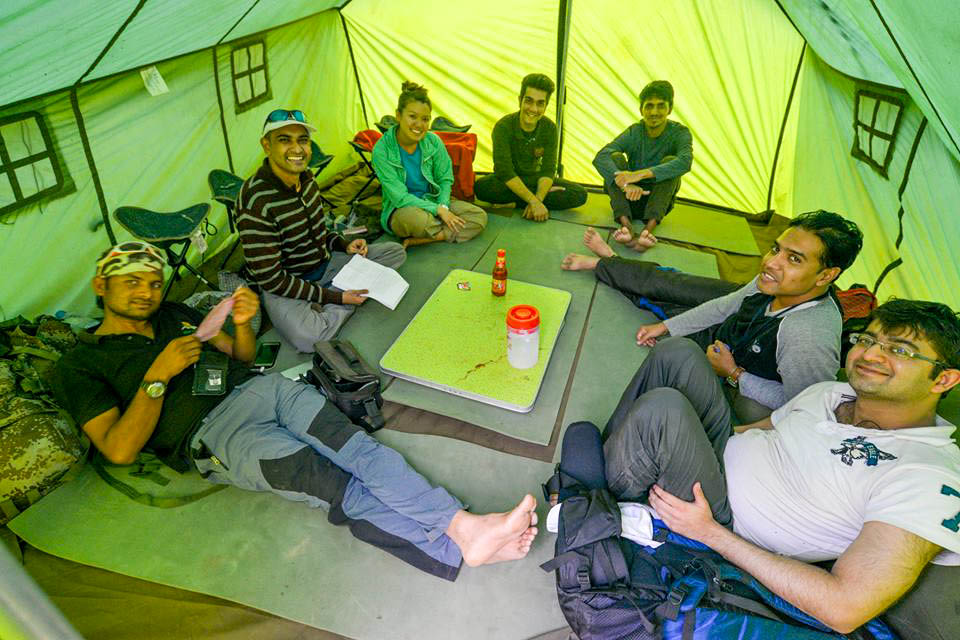 Day three began with a scrumptious breakfast, as we prepped ourselves for the arduous climb to Bhagwabasa, which was our last campsite before we reach the lake. The trail was slippery because of patches of ice and the gradient was steep. In fact, the stretch between Patar Nachauni and Kalu Vinayak temple is considered as the most difficult on Roopkund trek. 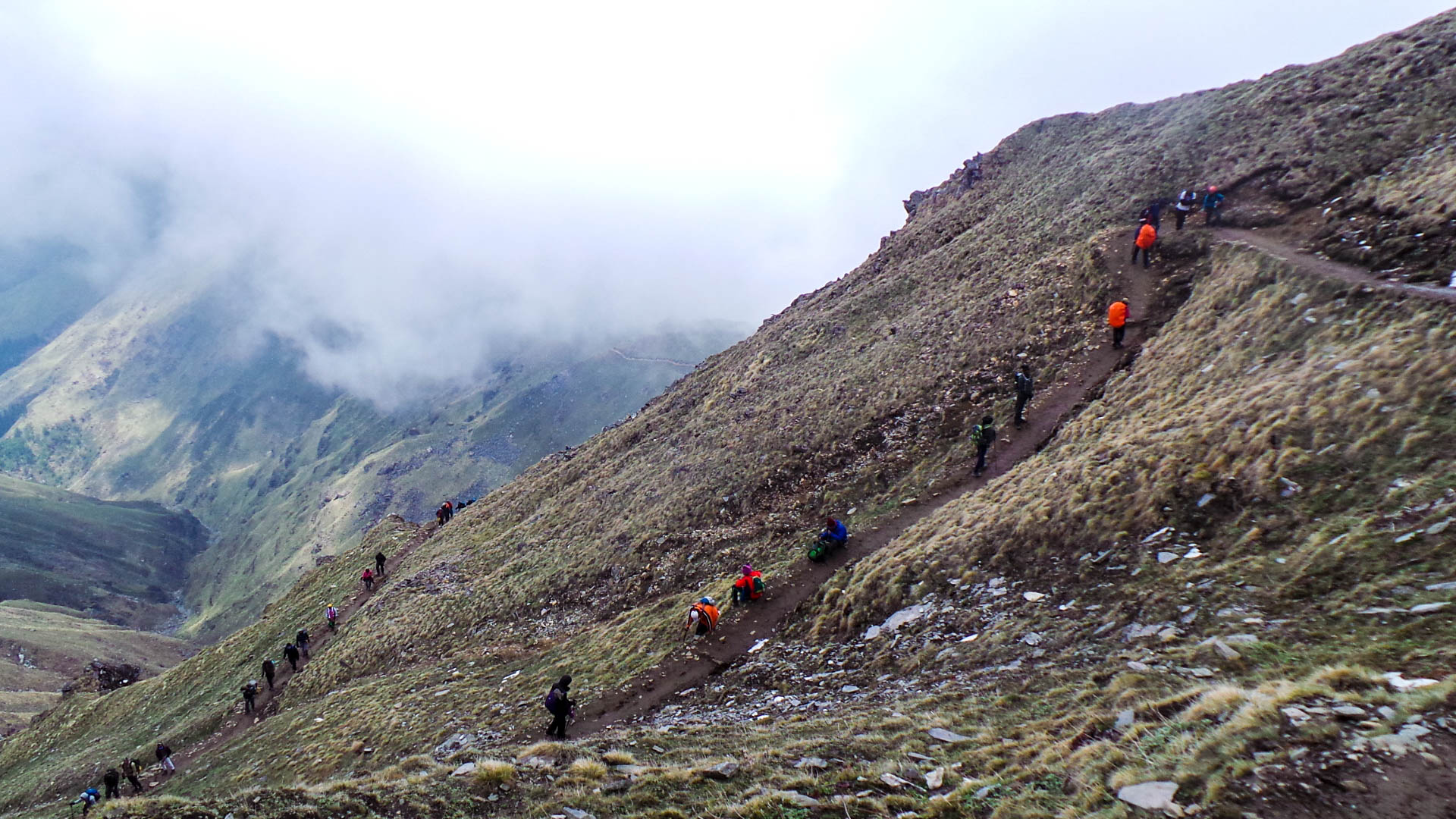 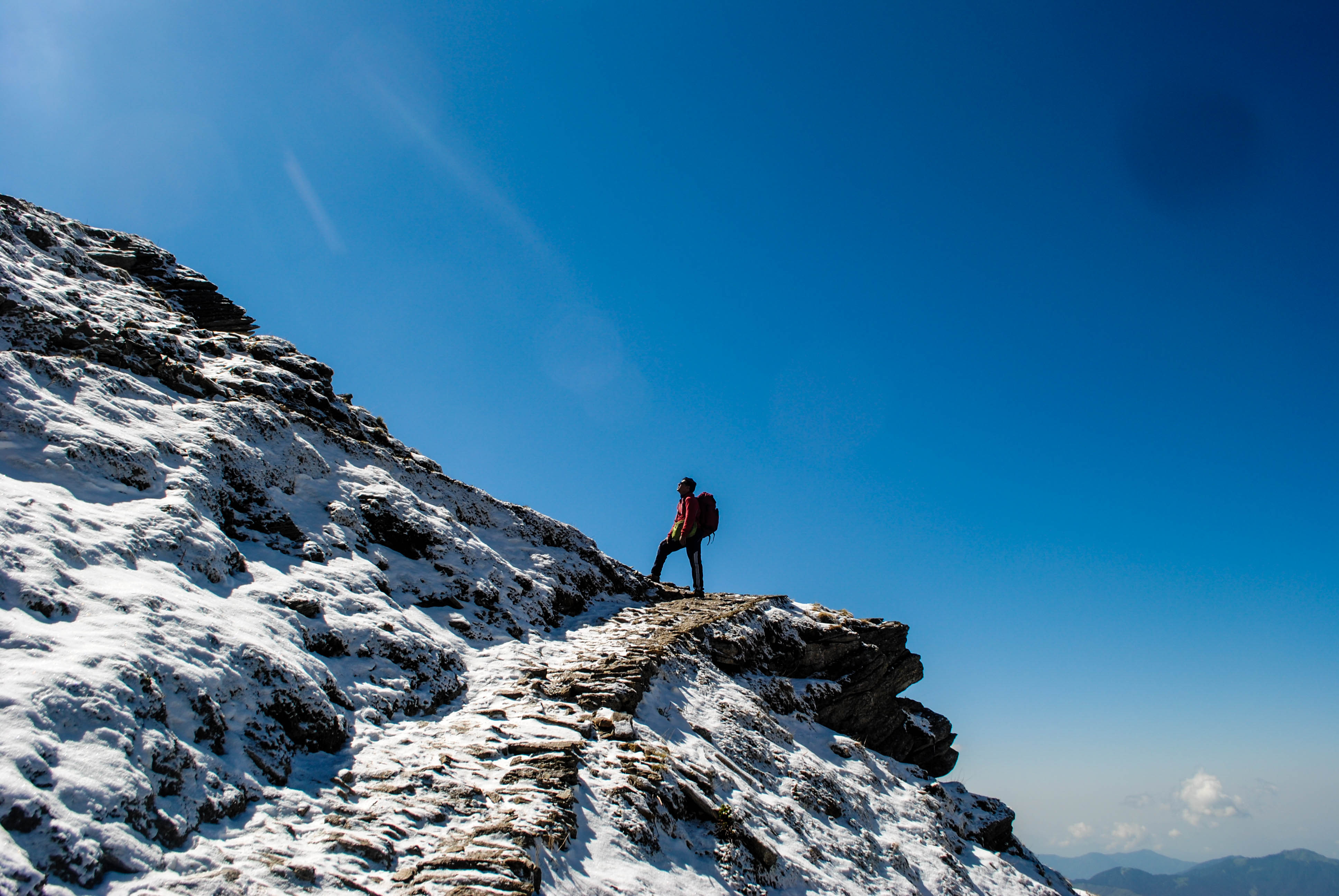 We crossed a few hillocks through hairpin bends to reach Kalu Vinayak, a small stone temple which locals revere. We chilled over an hour here, taking in the breathtaking panoramic views of Himalayan peaks that the vantage point offered. Here, we found the weather changed from a comforting sunny to dense and cloudy with strong winds in no time! 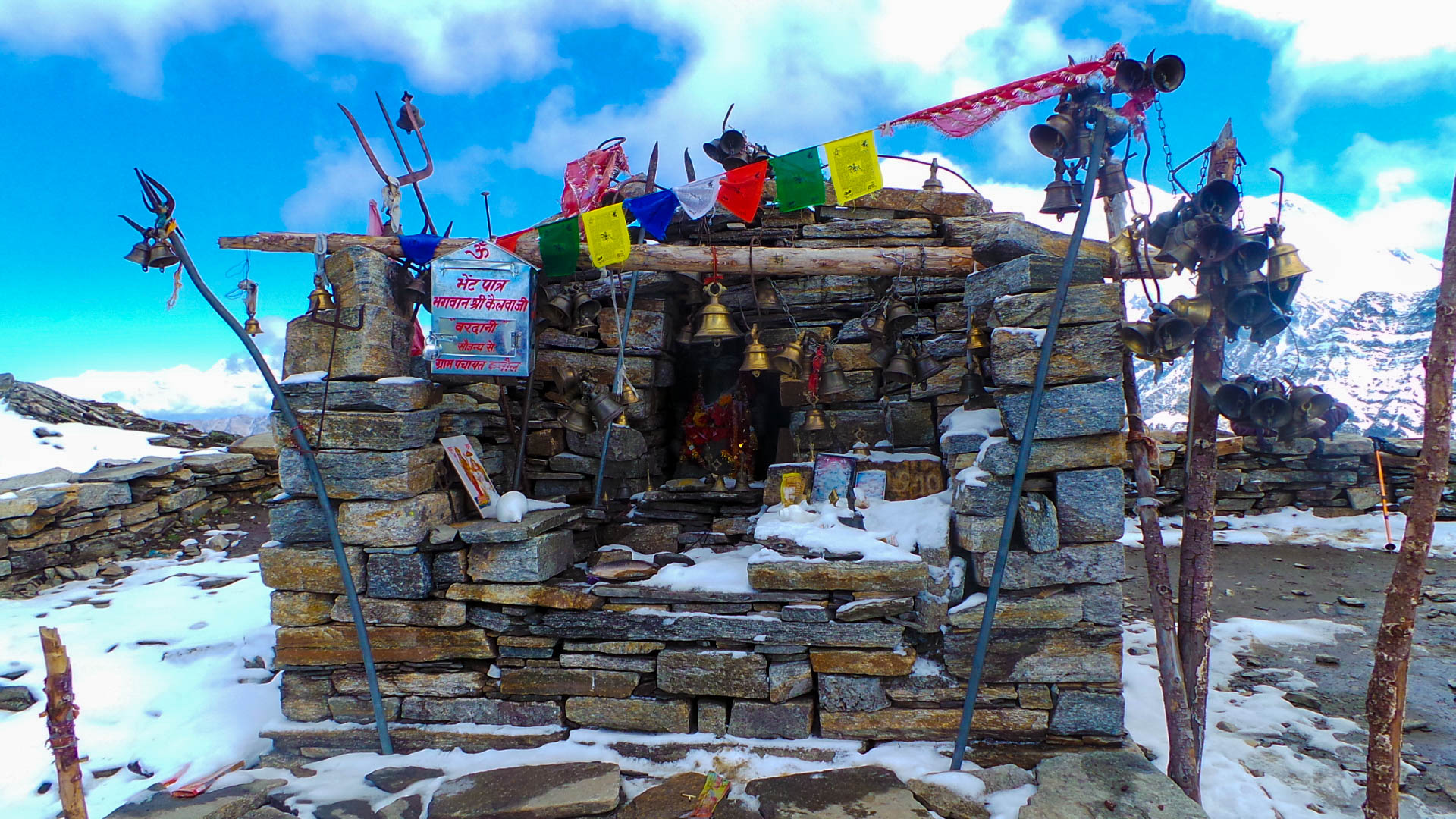 The 6,000-er (height of 6000+ Mtrs) peaks of Trishul and Nandaghunti cordon the area while the peaks of Chowkhamba and Neelkanth set the right backdrop to Kalu Vinayank Temple

Then on, after a gradual descent of 1.5 kms, we reached our rocky campsite of Bhagwabasa. The setting of this campsite was surreal with snow-clad mountains all around us, and white clouds floating over the valley that lay below us! Thanks to the cold weather, we quickly changed, and settled in our fibre huts with tea and Maggi. The evening was spent going shutter-crazy with our cameras, capturing the best of what nature had to offer to us. Jaran (our fellow trekker from Thailand) prepared delicious Thai dinner which we finished in no time. The signs of AMS were visible on most of us - we had mild headache and difficulty in breathing. This coupled with the excitement to reach our destination the following morning made it tough for us to catch even a wink! But the sub-zero temperature outside helped us get cozy in our sleeping bags, eventually lulling us to sleep.

Abandoned stone huts just before the Bhagwabasa campsite, with Mt Trishul in the backdrop 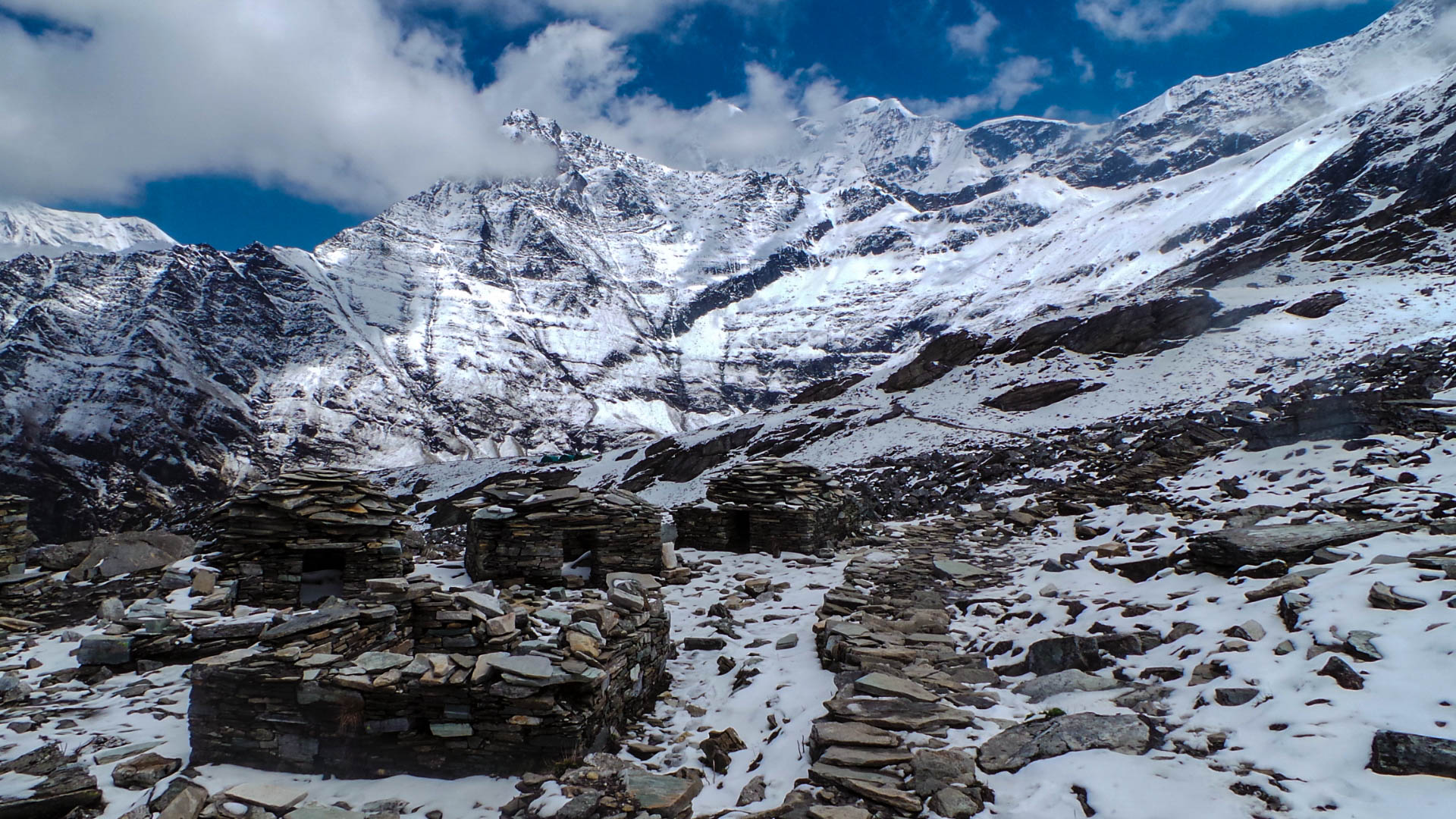 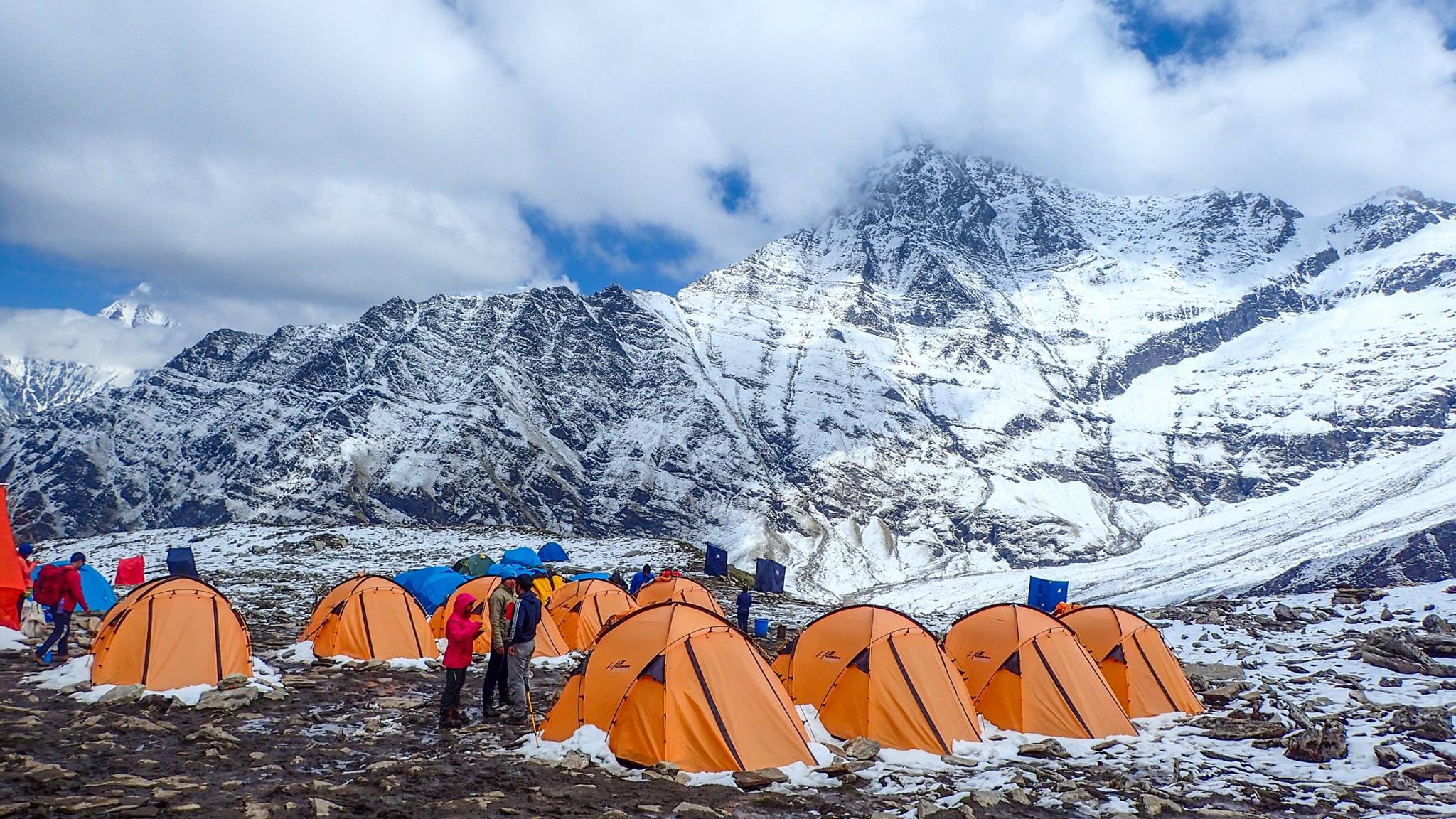 Fun photo session outside our camps 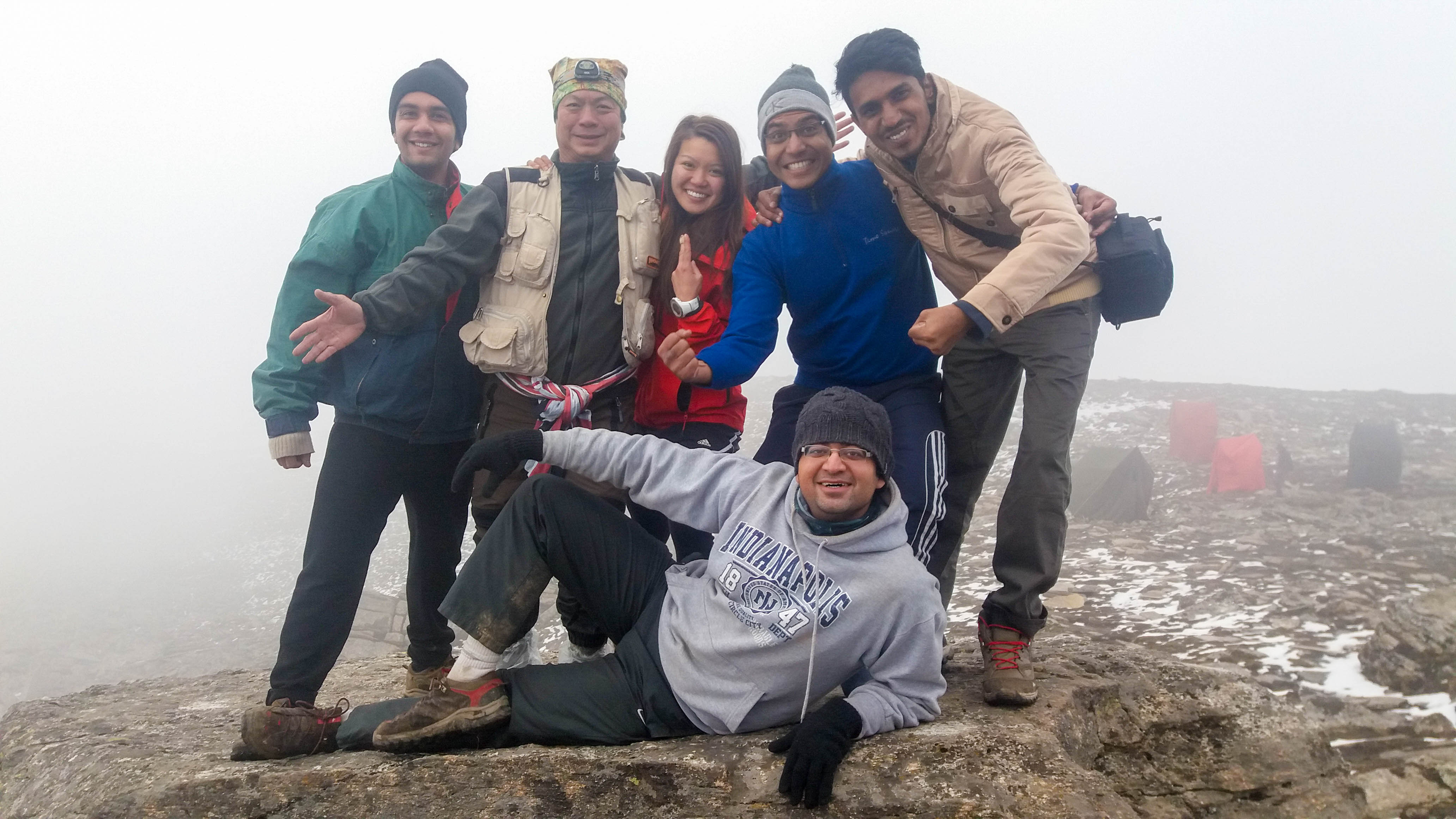 The day four morning started early at 3 am, with a nutritious brekky of milk porridge awaiting us. We turned our headlights on, and set off on the final climb towards the mystery! We encountered a ton of snow today - found easier to manage since it was soft. We traversed through the rocks covered with ankle-deep snow, with strong wind blowing at our ears. Battling the sub-zero temperatures, our only aim was to reach the summit as early as possible, before the snow would start melting. Our trek leader Wakeel gave us demonstration of ascending and descending in the snow which was helpful to all. 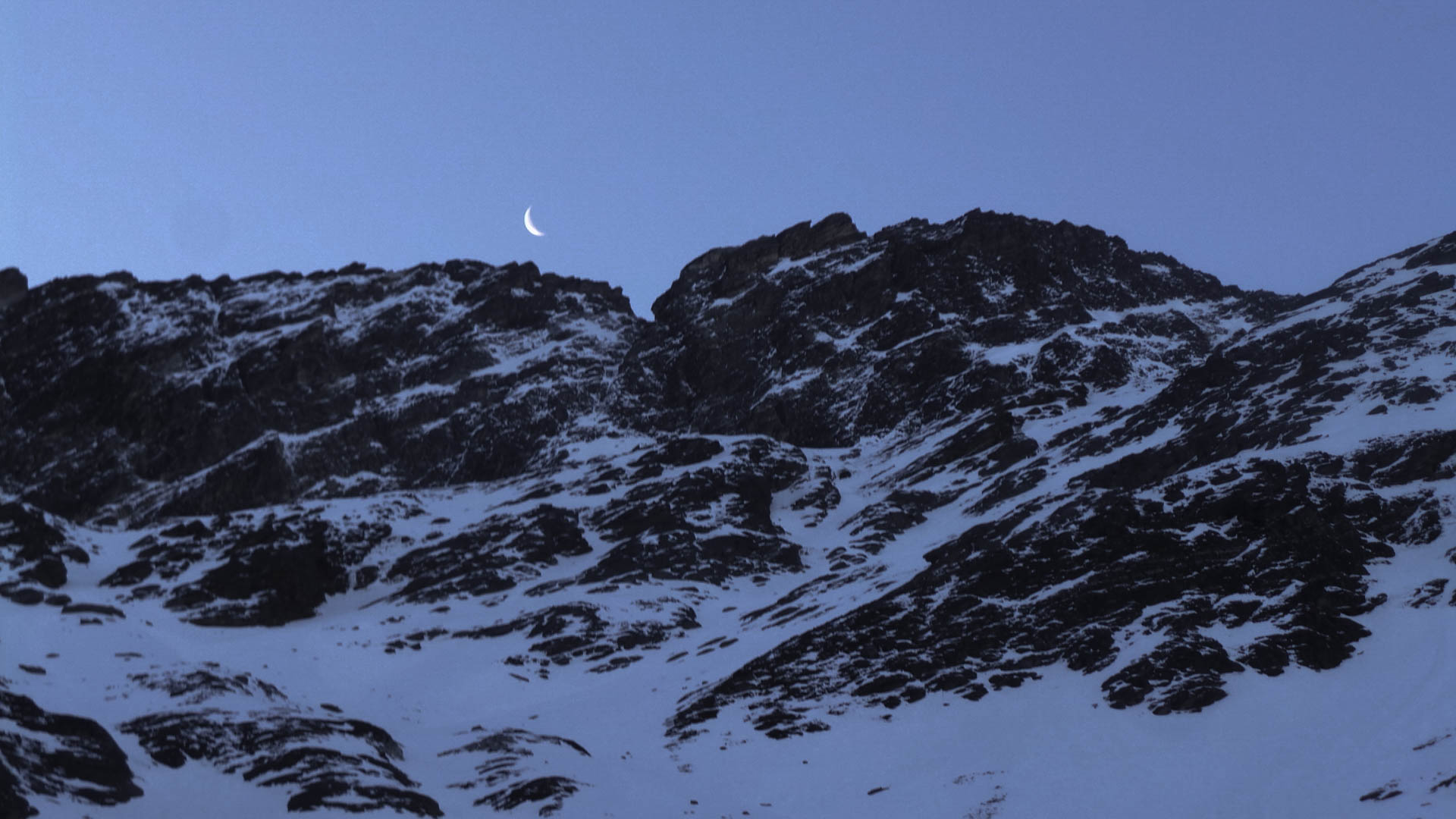 our group ascending toward Roopkund over thick blanket of snow 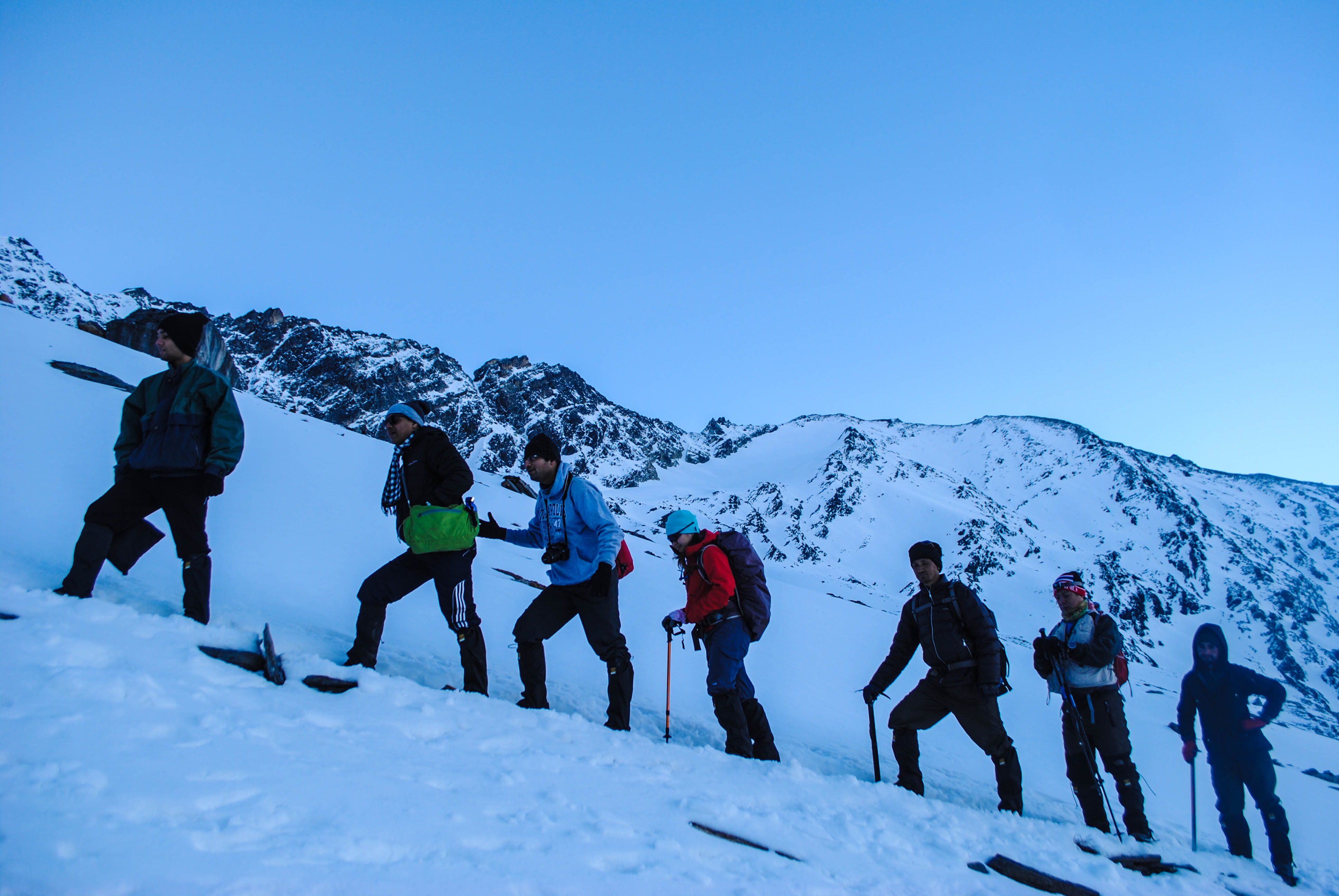 Soon, we crossed a long file of fellow trekkers who had begun the summit ascent earlier than us, as we huffed and puffed our way closer to the mystery lake. The first views of the snow-covered lake flanked by soaring mountain peaks was phenomenal! I felt a sense of achievement as for the first time I did a snow-trek and reached to a height of about 16000 ft. The effort of overnight train journey to Kathgodam + 10 hours hilly drive + 3 days of trek with steep climbing and spending nights in tents amidst the freezing temperature was all worth to witness the beauty and charm of this trail. And I guess that is the reason that this trek route attracts thousands of trekkers from all around every year. The route to Junargalli Pass (half an hour’s trek further up from the lake – optional for trekkers) was closed due to heavy snowfall, so we could not go further. 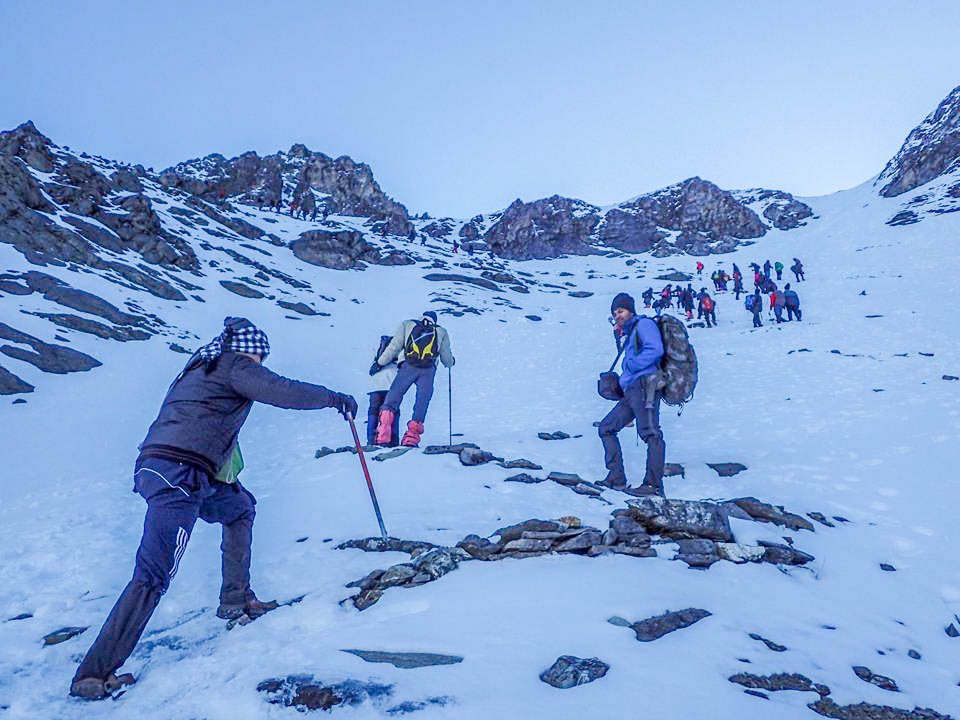 The finale – splendid sight of Roopkund Lake at 15,800 ft 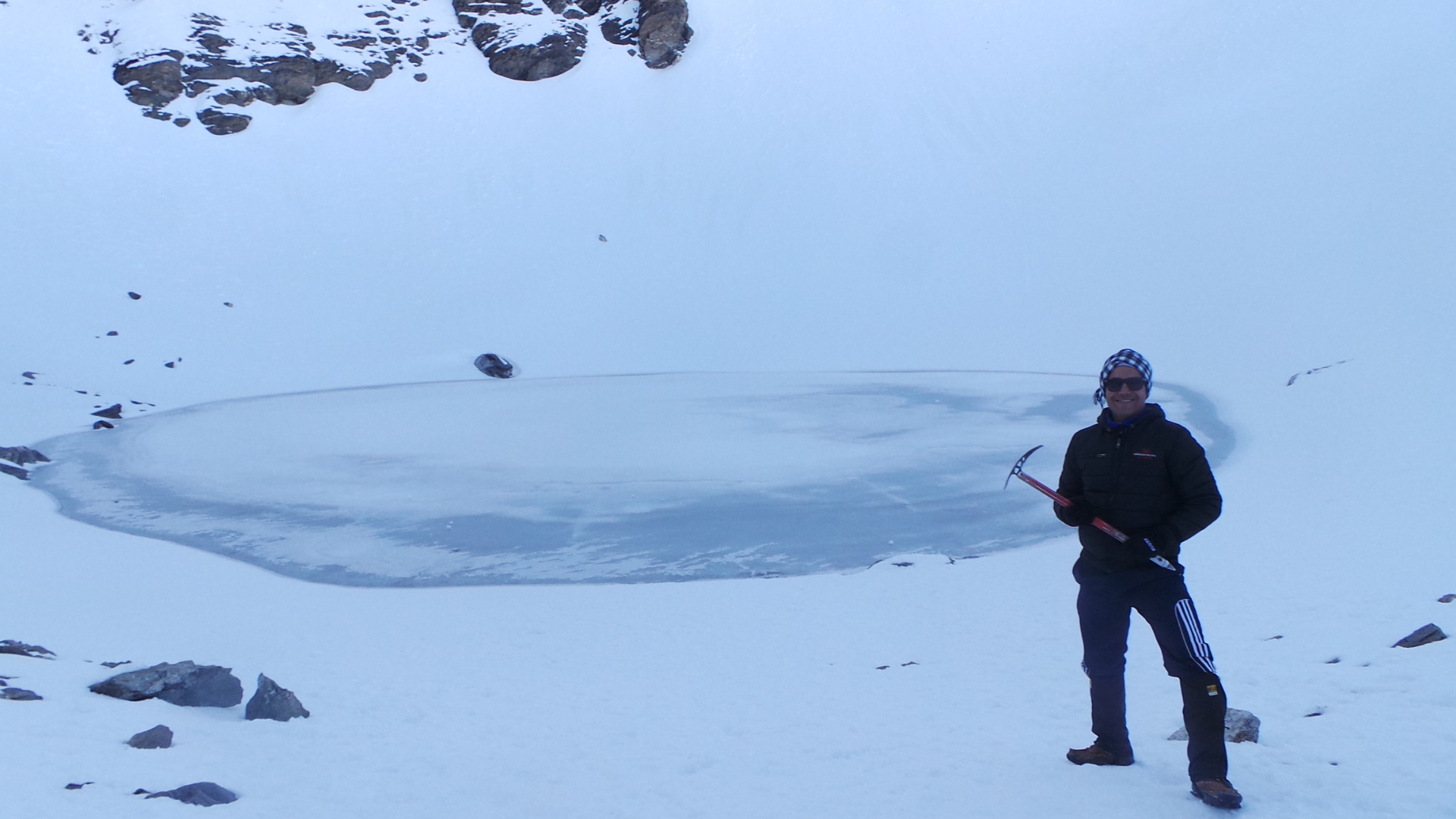 Since the lake was frozen, we could not see the skeletons in the lake. But there were couple of bones kept on the rock by the shore. Researchers claim that a hailstorm killed hundreds of pilgrims on their way to Nanda Devi Jaat Yatra, that takes place every 12 years. We had to bear in mind that the sun was constantly on the rise - so after a quick photo session, we started our journey of descent. Our aim was to avoid encountering freshly-melted snow, as it makes descents tough. The downward trail was tougher to negotiate as we were not equipped with crampons or micro spikes. The sun was warm enough to melt the upper layer of snow which converted it into slippery ice sheet. Hats off to the proficient local guides who helped me cope with this death trap :). The next one km patch from Bhagwabasa to Roopkund was very difficult and I surpassed it meditatively unable to focus anywhere else but on the pugmarks stamped by the guides.

We were back to our Bhagwabasa campsite by 9 am and I just collapsed myself on the sleeping bag, dead tired of the strenuous morning hike. Within an hour, we refreshed ourselves with a filling breakfast, and commenced our backward journey to Bedini Bugyal Campsite. Downhill walk and clear weather helped us reach the delightful meadows quite early. I enjoyed the lush green view the most and explored it thoroughly by clicking as many pictures.

It was a chilly night and temperature has dropped significantly compared to the day-time. The night sky was filled with countless shining stars. The morning started on a healthy note as our trek leader Wakeel conducted a brief Yoga session so we could stretch our sore muscles. 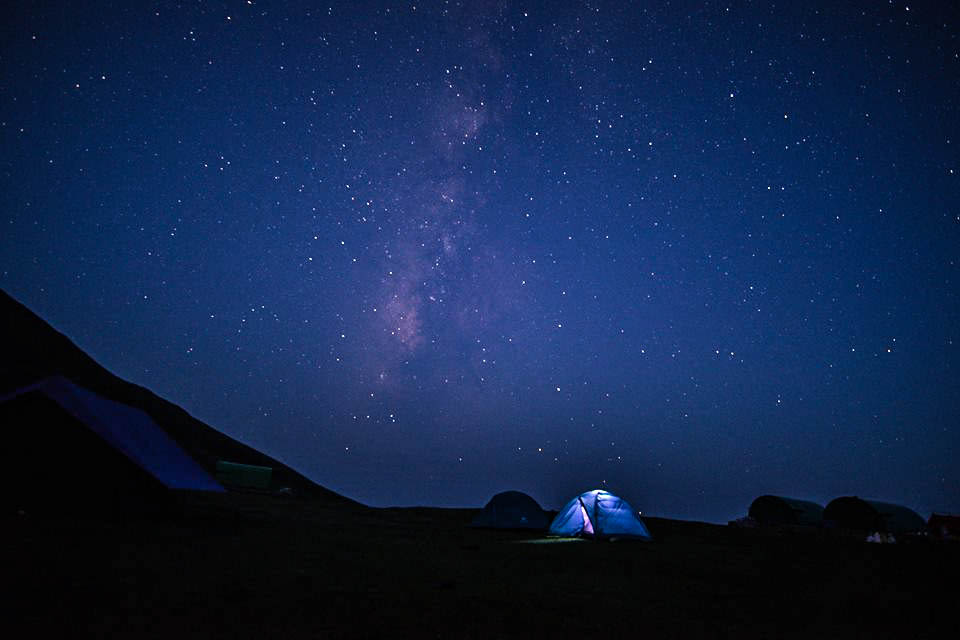 What can be better than a refreshing yoga session in the fresh air at 12,000 ft! 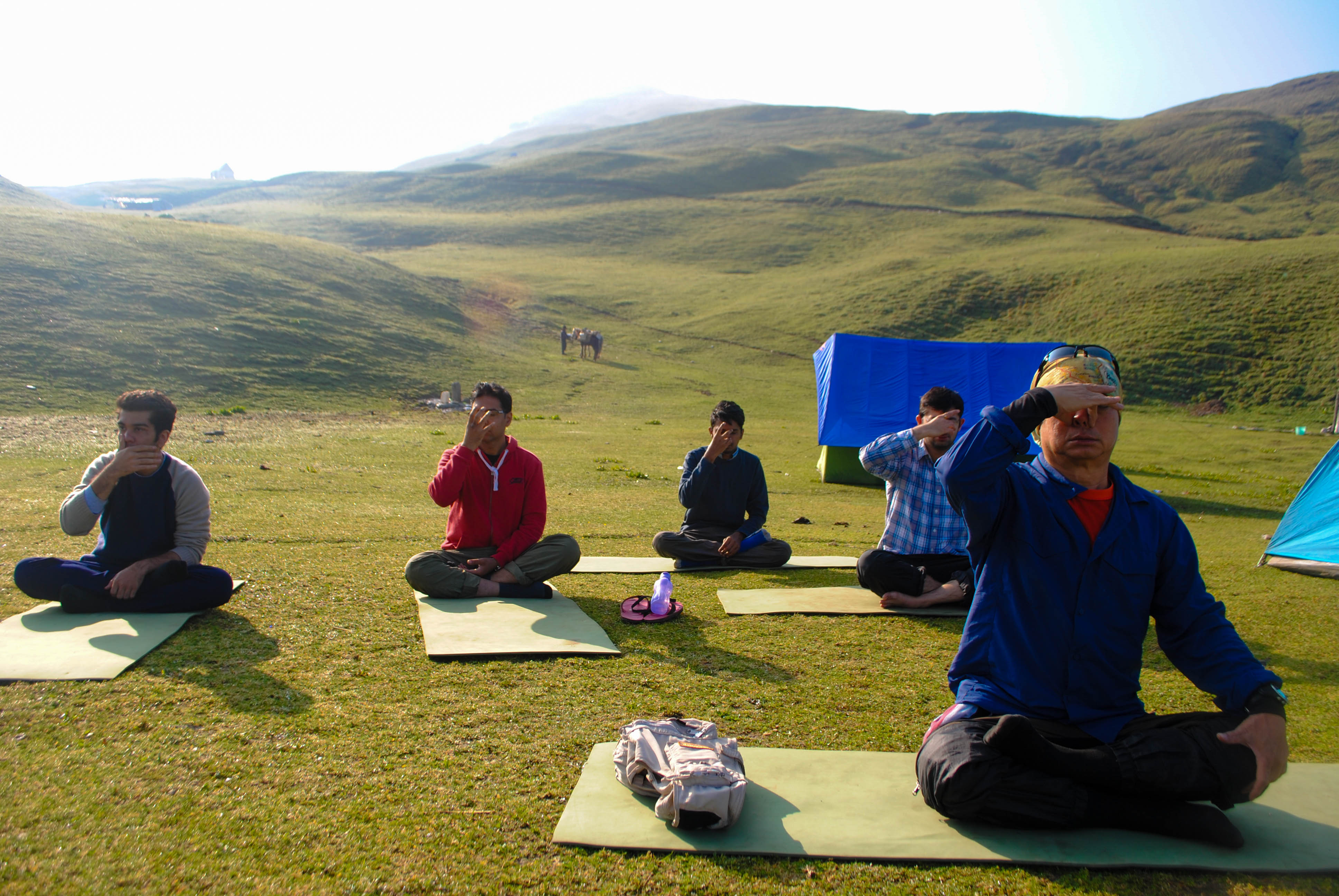 Roopkund Lake trek is also considered as visiting the Shiva family as you witness Lord Shiva in the form of Mt. Trishul, Goddess Parvati in the form of Mt. Nanda Ghunti and temples dedicated to Lord Ganesha (Kalu Vinayak) and Kartikeya, which we encountered during our journey back to Wan Village.

The unadorned Kartikeya Temple, just after the Bedini bugyal, towards Wan Village 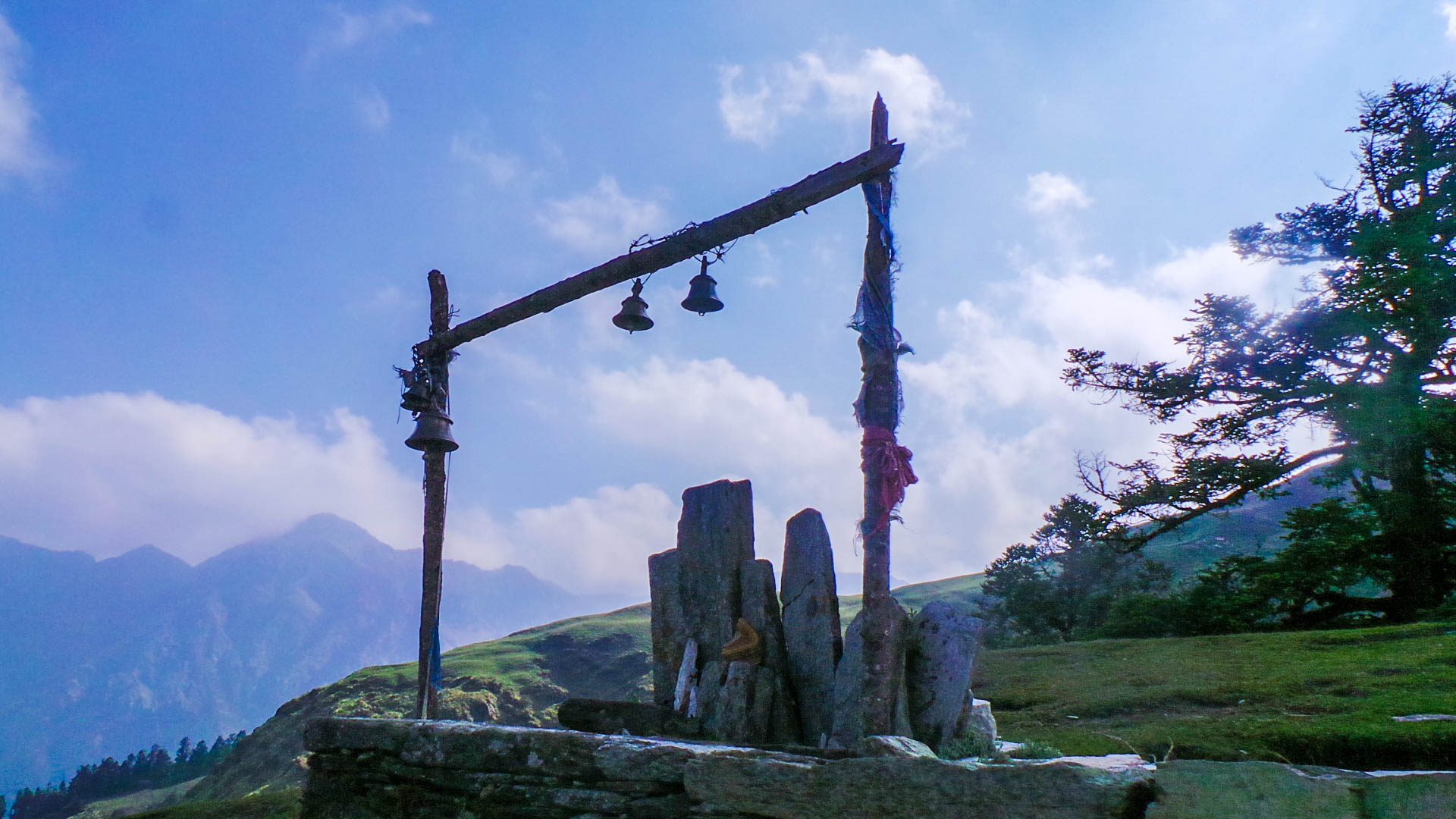 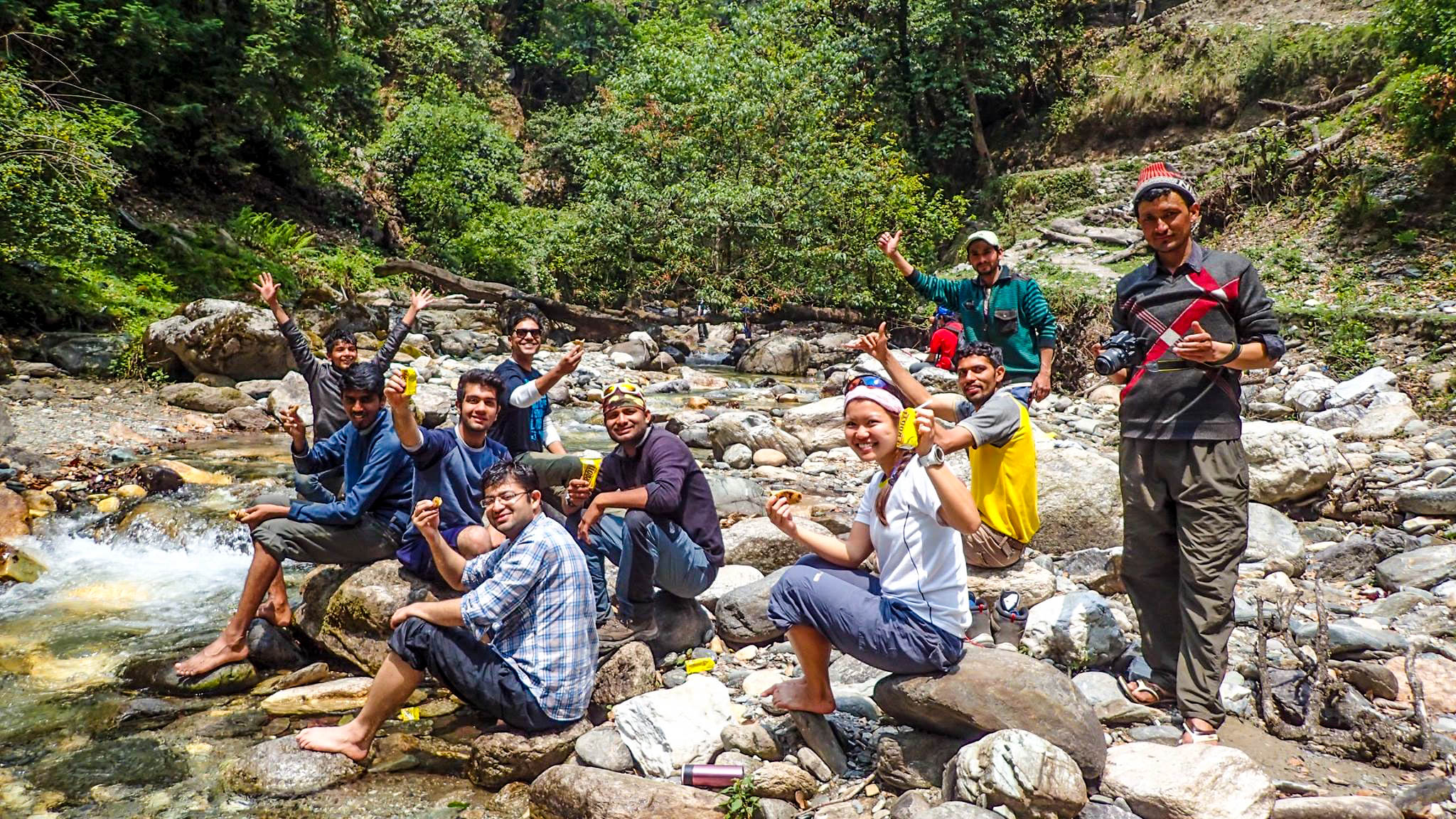 We reached Neelganga stream by lunch and had a small picnic on its bank with our packed lunch. After relaxing for about an hour, we left for our onward journey to Wan village where our SUV’s were waiting for us to take us to Lohajung Guest House. We took relaxing warm shower after 4 days and retired ourselves on the bed and warmth of quilt (which was luxury after the grueling trek of last 4 days). During the night, we had a small party to celebrate our feat and had a great fun. These moments will be etched in our memories forever. I cannot thank enough our trek leader Wakeel & the staff who accompanied us during the trek for making it so memorable.

The BEST experiences are often outside your comfort zone, so I would strongly recommend each one of you to witness this mysterious lake in the Himalayas.

our group along with the staff at Bedini campsite – Wakeel is missing though :) 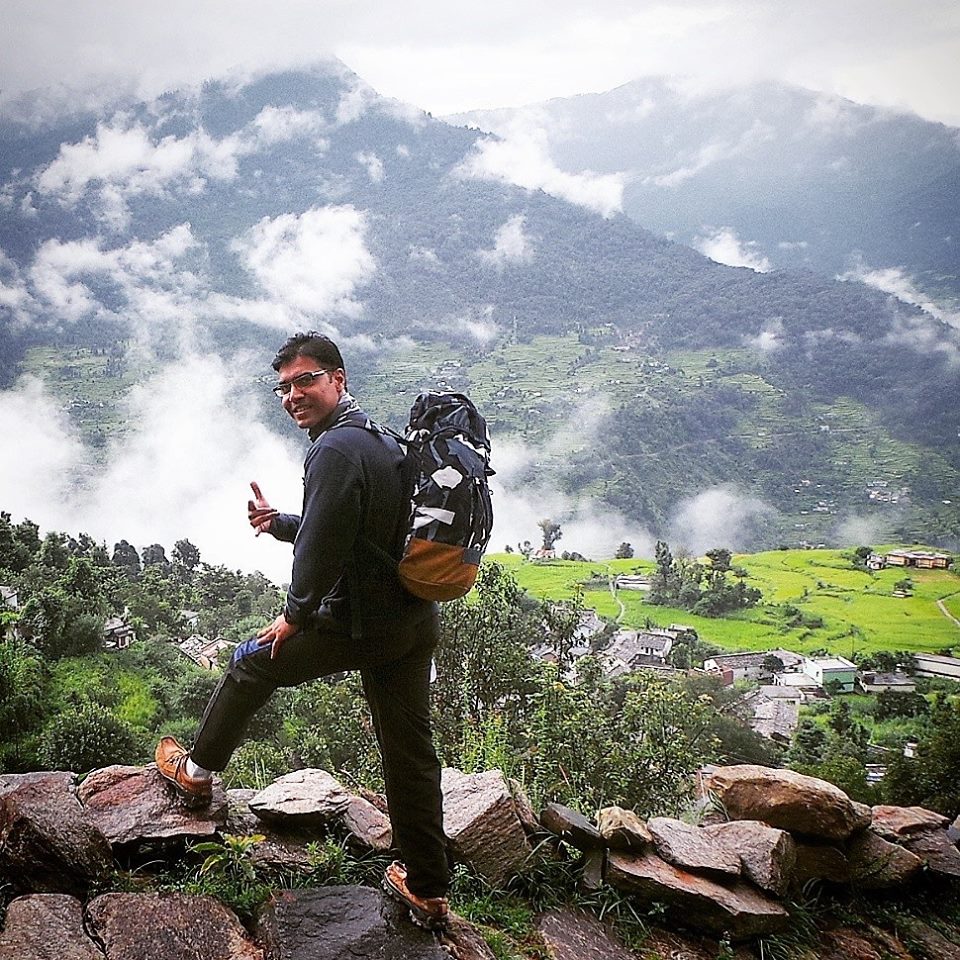 A passionate salesman with a traveler heart. I dream of settling in the Himalayas and set up an orga Read more