Mountains have a stunning beauty, a coldly savage and addictive quality that is difficult to resist and dangerous to ignore. They make you feel so tiny yet so big in your heart; confident and yet so vulnerable. Some say they touch your soul, I say they deepen it. Have you ever found yourself staring at your room wall for no reason, or have you ever struggled to phase into the real world after being in their shadow for a week. Well, if you have, then that is when you know they have conquered you. They give you the rare joy of connecting and embracing the inconsistencies like unknown companions. They teach you to live with the differences and achieve unity, not uniformity, for uniformity brings along boredom.

The crackling of unbundled blocks of snow under my feet as I walked on the rickety formations of Chadar still resonates in my ears when I sleep. Still, I tend to slip in my deep sound sleep like I did when I traversed that frozen sheet of ice. 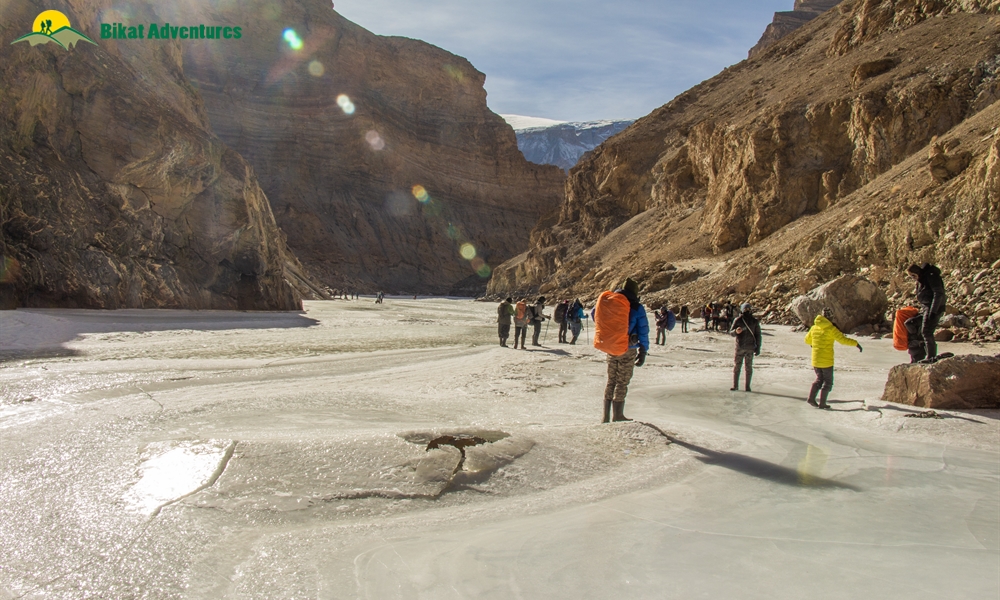 Chadar (the frozen river) is an elongated gorge of Zanskar river laterally surrounded by the mighty mountains on either sides stretching for over a 100 Kms. It is as serene as anything could be and just like mountains do, it commands the power to manipulate you. Paradoxically, it nullifies your existence and elates your being.

It has been rightly said that Chadar is not a trek, but an experience, experience which exposes you to insanely cold days (up to negative 25 degrees) and inhumane colder nights (up to negative 35 degrees); a frozen sheet of ice, a gush of turquoise water with ice seracs hanging all around, more than a dozen icefalls, and most beautiful of all, the Zanskari hospitality. 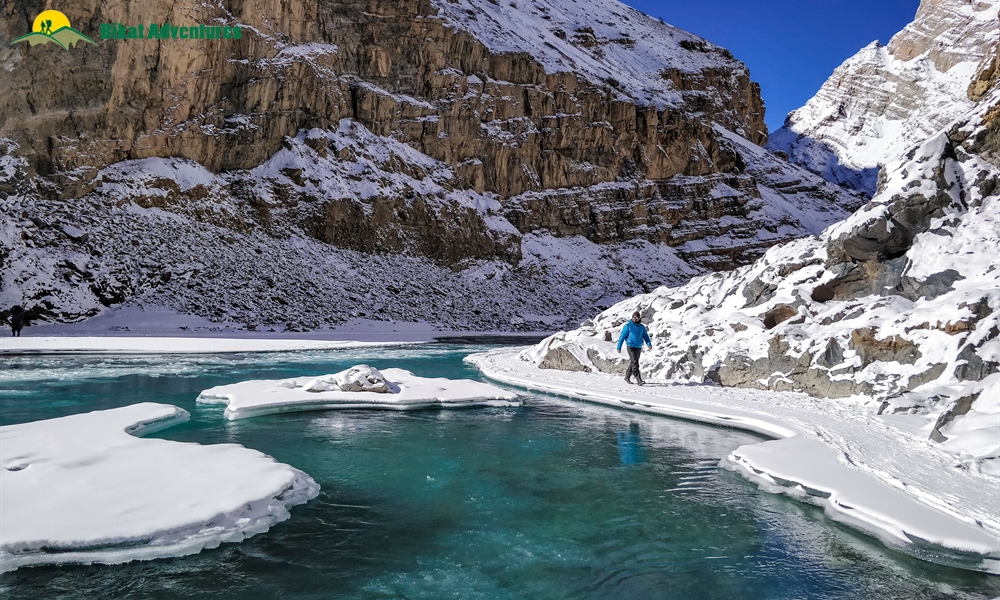 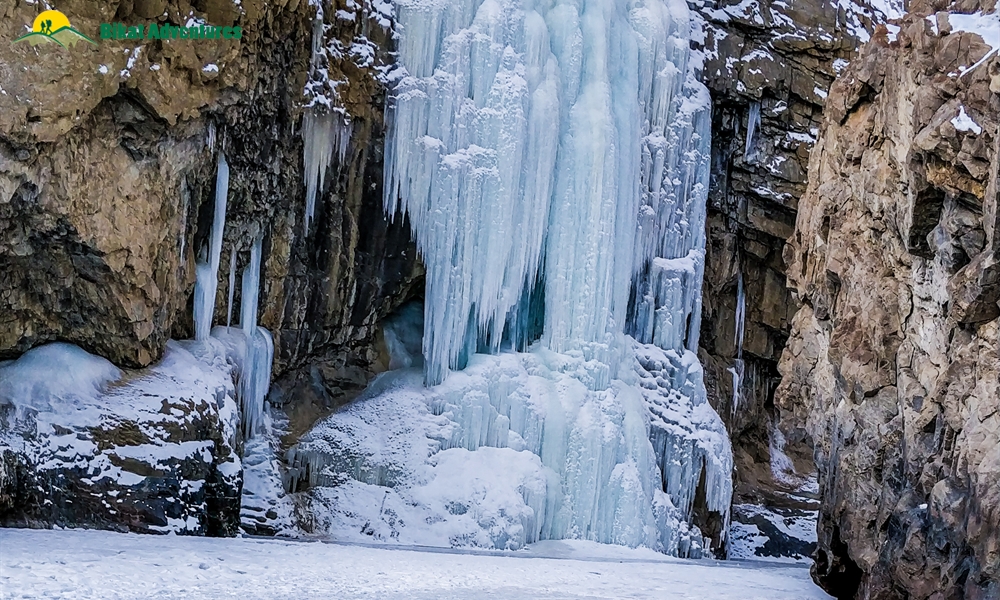 Every porter you come across gracefully greets you with such humility that it unburdens your heart. When they run with tons of baggage on their sledges, you cannot think of a better simile than – ‘Porters are to Chadar what a bed and banks are to river.’

With bed acting as the bottom most formation of the river which lets it flow through and banks channelizing that flow, porters help you survive the harsh weather and the nerve-racking circumstances with their on-call support which lets you navigate safely on that otherwise precarious river, and not to forget their finger licking food which not only satiates your hunger but also makes you crave for more. And last, most importantly, they do all this without expecting anything in return but a humble smile on your face. 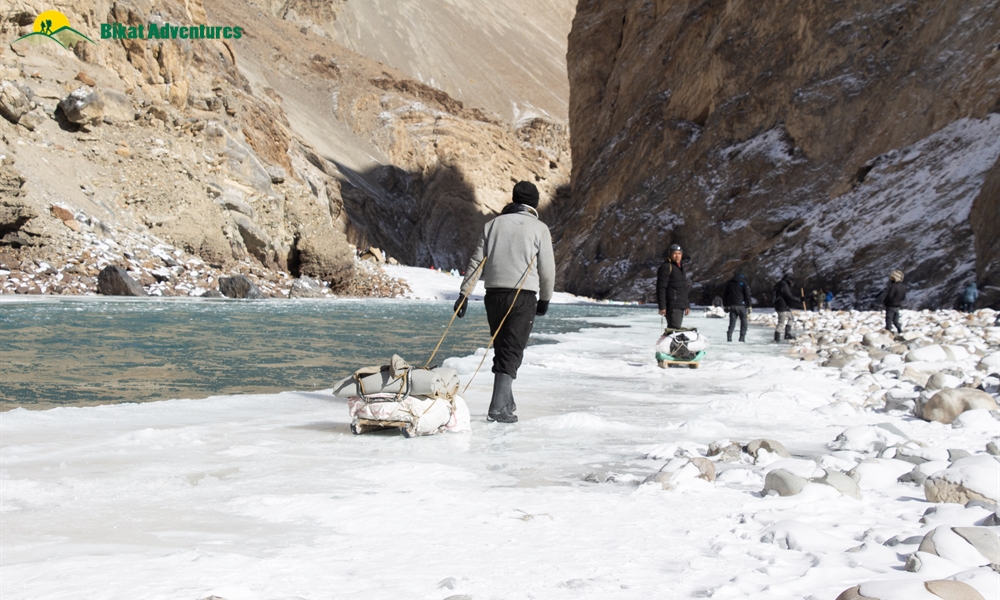 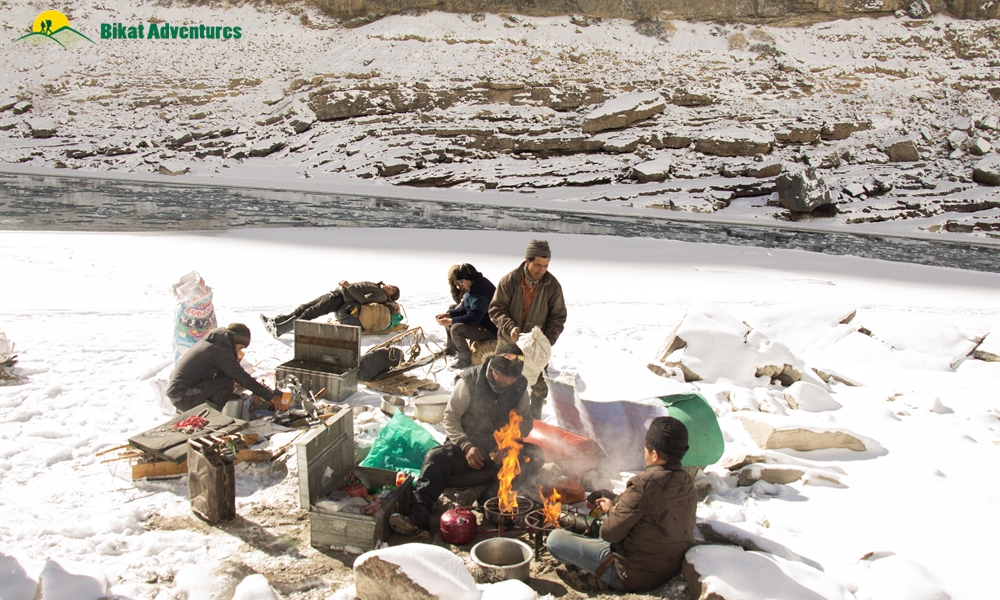 Just as nobody is in charge of the dynamics of life, and through them we learn to stride through regardless of our personal inclinations or disinclinations, Chadar also has its own way of enlightening us with its ever changing textures.

The thin ice sheet demands from you to be at your diligent best, observing each and every step of yours while you’re busy penguin-ing the Chadar. Whereas, the snow surfaced Chadar boosts up your confidence, eases your efforts and fastens your pace but also hides perilous apertures beneath it. 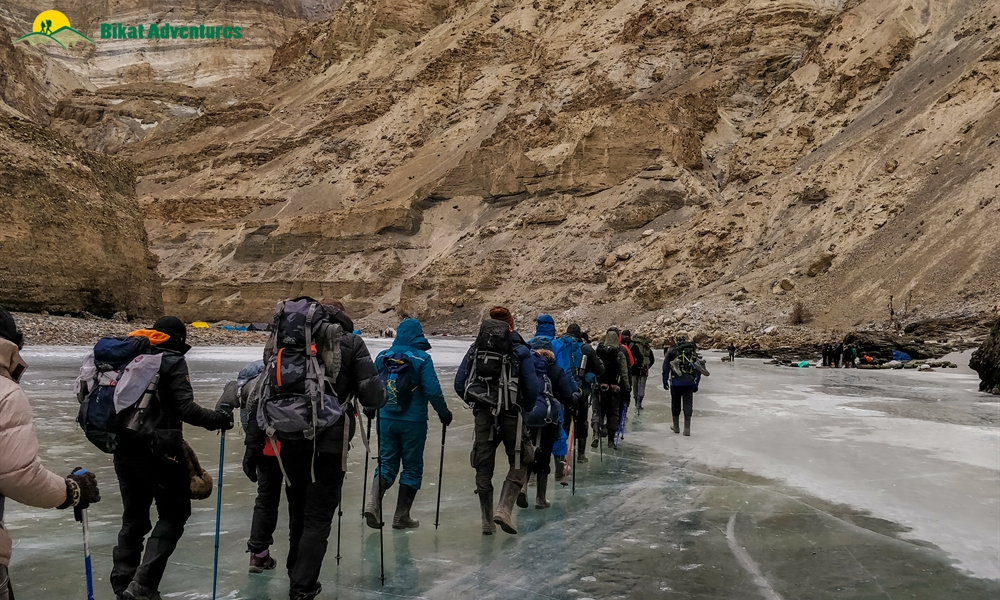 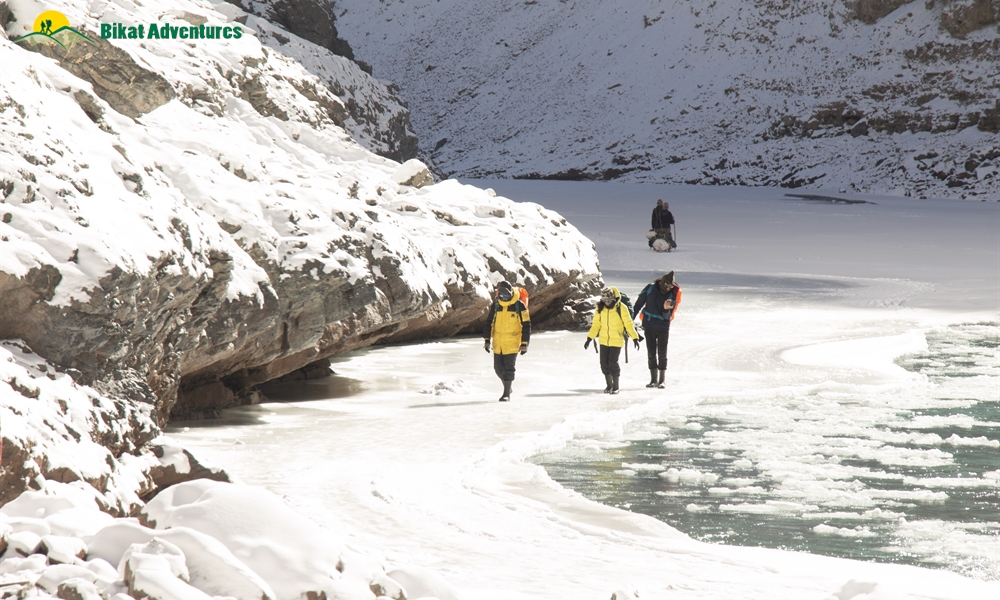 Lately, there has been some sort of conundrum about Chadar being overhyped. Yes, it can get crowded sometimes, but the crowd is there for a reason. Believe me when I say this - the moment you set foot on that ice sheet, you transcend into an unknown territory, which is surprisingly unimaginable too. It is hard to grasp the power of it until you have actually experienced it. You bring something with you, and leave some of you. That’s the beauty of it.

Sometimes people ask me – Why do I do this? I think nobody can put it better than Greg Child (Australian Mountaineer) -

“Somewhere between the bottom of the climb and the summit is the answer to the mystery why we climb.” 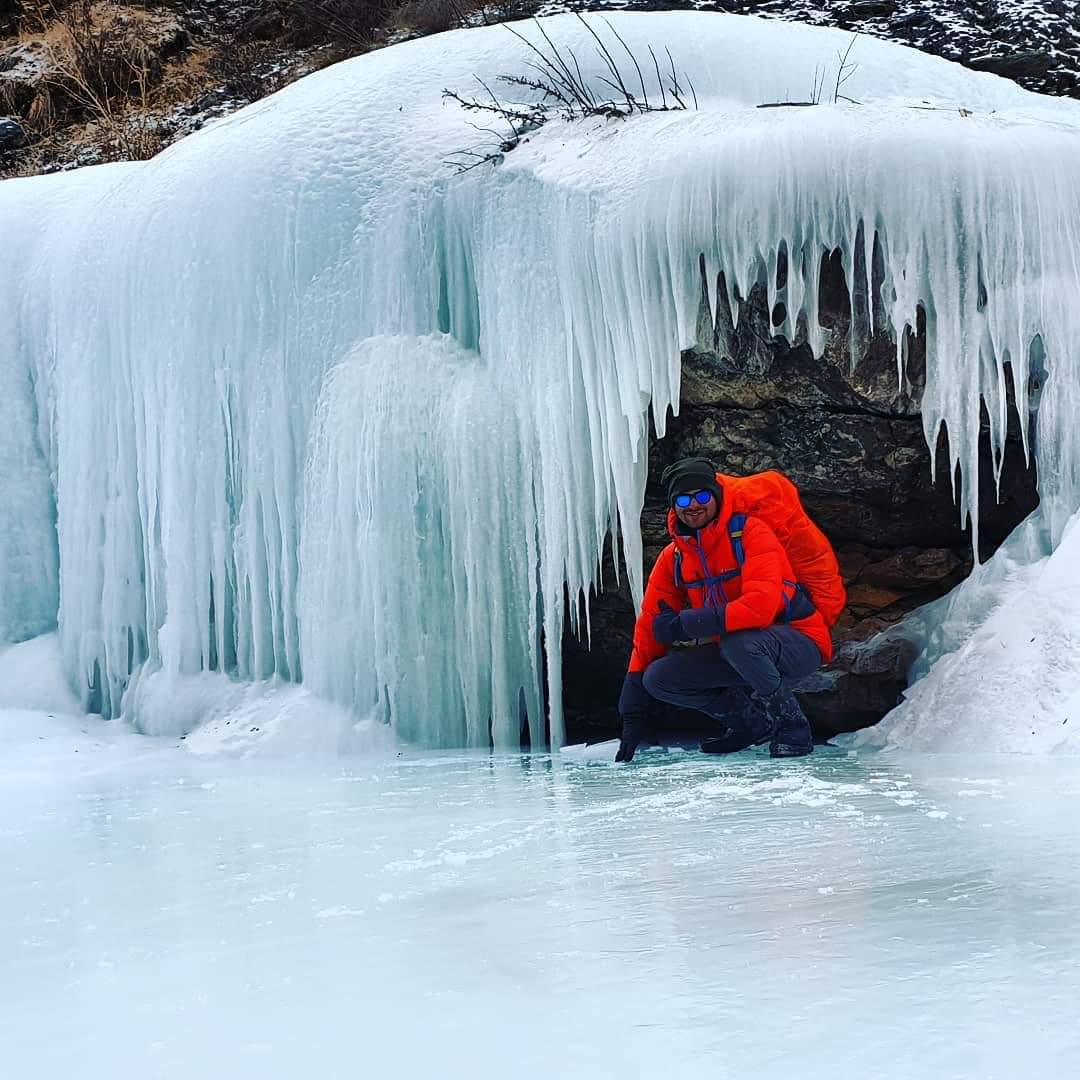 A number cruncher and a mountain lover Read more