So after coming back from Brighu Lake last time, I was completely drenched as it was my first snow trek but then the desire to continue to explore the Himalayas keeps pushing me further. And as a result, I got an opportunity to do Beas Kund Trek.

It was a Friday Morning and a long weekend, due to Eid festival on Monday, was right at the corner. As usual, I didn’t have any plans. Moreover, the absence of my wife (due to her work) made me further a lazy ass to plan anything. Also, I haven’t traveled without her much it was a bit difficult for me. But then the call of the mountains has been echoing in my eardrums and making me dance again and again :). I called up Swati (My Lifeline my wife) and asked her that I don’t have any plans but there is one Trek which I think I can do. She said just go do it. Don’t miss these three days just go for it. What else was needed, these words worked like fuel. It was almost 11 AM by the time I started to make arrangements. Booked my bus ticket (Last Seat of the Volvo), booked the Trek with the tour operator all in ~30mins and bingo I was ready to be in my zone – Himalayas…

Beas Kund – It’s considered to be the source of the river Beas which flows all through Manali and lower parts of the Himachal and ultimately meets river Satluj in Punjab. It is said that the very famous Hindu Sage Ved Vyas used to come to this place to take a dip and hence this river has been named after him as Beas (V of Vyas has been slanted to b). And subsequently, the source of the river is named as Beas Kund. This is considered to be the holy place with so many stories – beliefs around it.

Beas Kind Trek – The overall trek is not a very high altitude trek with the highest point being just 3650m. But still, try to be careful as AMS starts taking its course post 10000ft. The way to the trek is from Manali. You need to reach Manali and then hire a cab to Solang Valley – A very prominent place near Manali famous for various adventure activities like paragliding, zorbing, etc. From Solang, you can either drive down till Dhundi or trek it up (~8kms). From Dhundi the actual trek starts. To reach Dhundi by road, you need to arrange a cab with special permissions.

I have termed this as a day 0 as we didn’t do any trekking activity on this day. We just reached Manali. So as stated above, it started with the booking of the trek and the bus ticket. I was supposed to board my bus from RK Ashram Marg, Delhi. This was the first time I was boarding the bus to Manali from this place as the usual places (Majnu Ka Tila and ISBT) were totally jam packed due to the extended weekend. The impact of the same was clearly visible at this new place as well as there was a hell lot of crowd waiting to go to  Mountains, away from the scorching heat of Delhi. Anyways, with all the struggle and some persuasion, I was able to get a seat along with 3 Andhra Pradesh Boys going to Kasol to get smashed. 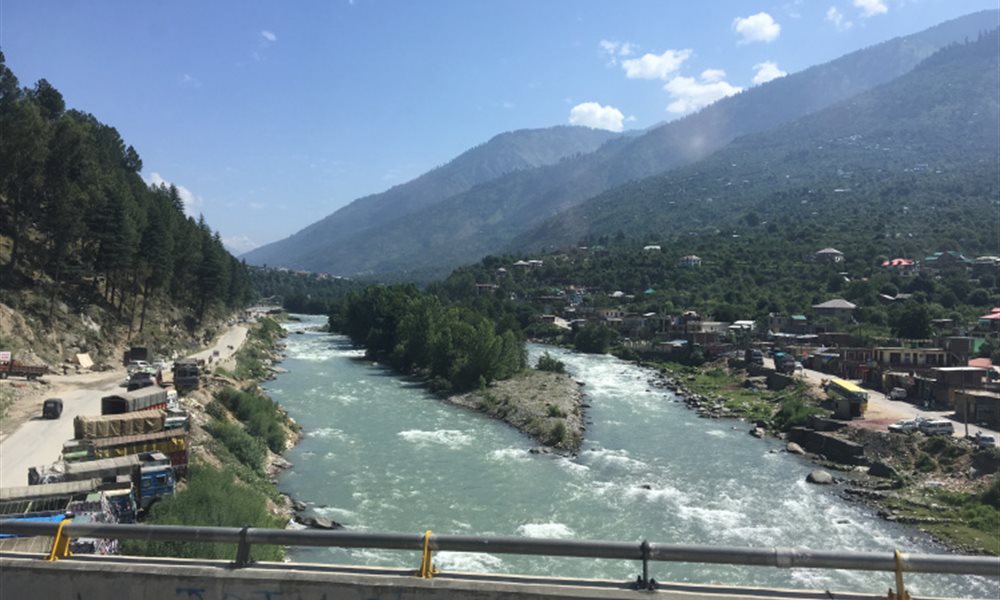 Our bus reached Manali at around 12 due to the heavy traffic. I was greeted with such an amazing view of Himalayas with Beas in full flow. Coincidentally, I bumped into a person who booked the same trek through operator and was traveling through the same bus. We reached Manali Mall road by 12.30 and met the rest of the gang. There were total 8 people including me and 1 Trek Guide. We gelled along over a small lunch break and then made our journey to Dhundi.

From Dhundi, we started our trek and were welcomed by the pristine beauty of the Kullu Valley. The distance to BakarThach from Dhundi was around 3-4 km with not much very steep ascent but plenty of river River Crossings like below.

The Trek to Bakarthach will take 2-3 hrs depending upon your speed. You will not get any shops or anything in between which is the best part. The view around is majestic. You will still notice some traffic jams in between.

Traffic Jam at the River Crossing 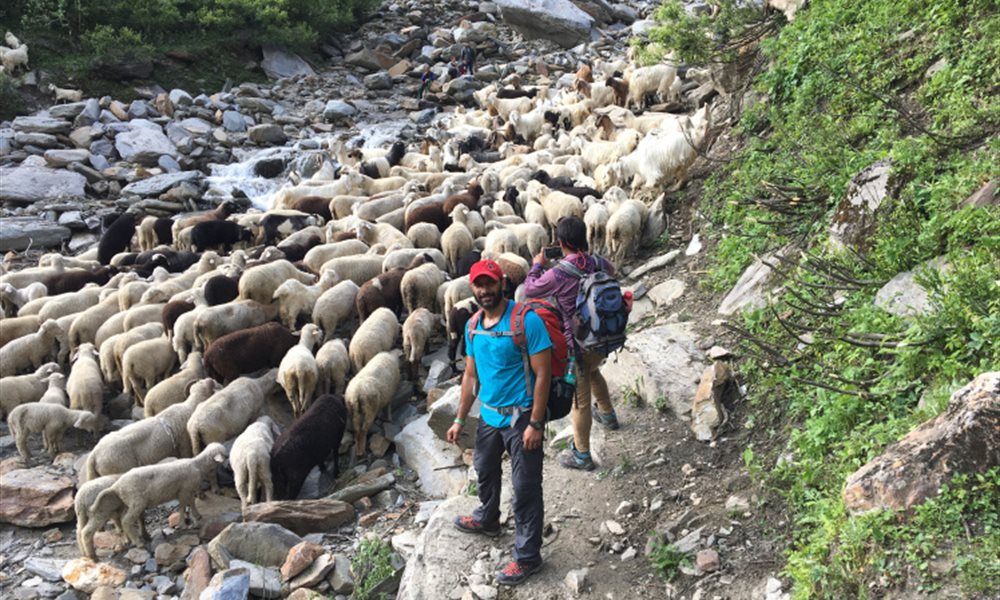 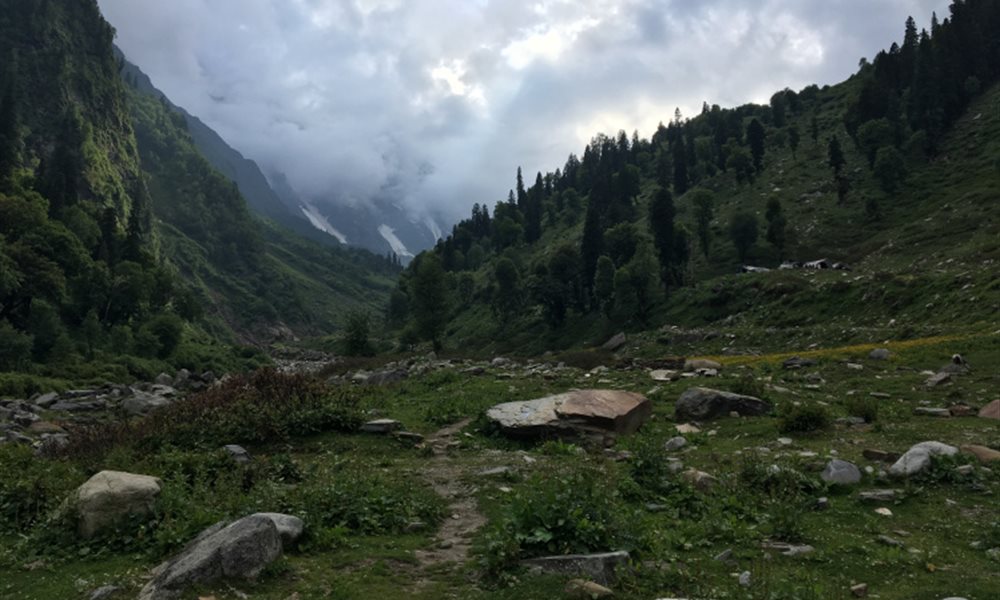 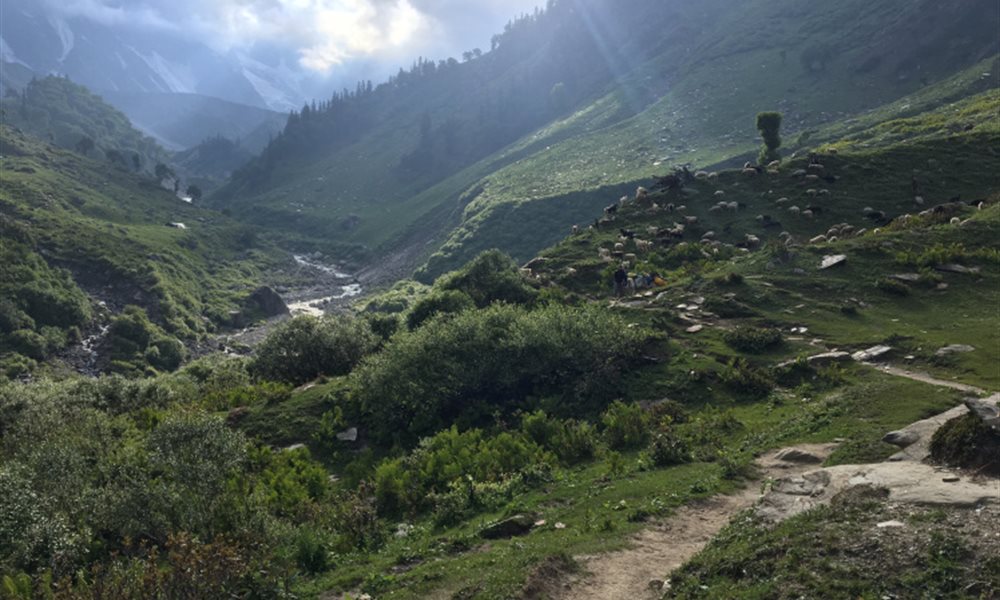 Day 2: Sunday (Bakarthach to Beas Kind and Back to Bakarthach)

Somehow I have perfect sleep in the mountains which I struggle to get in cities. Even if it lasts for few hours, its enough to keep me charged up for the whole day. And with the early morning views like below, I am sure no one would want to miss these while sleeping. 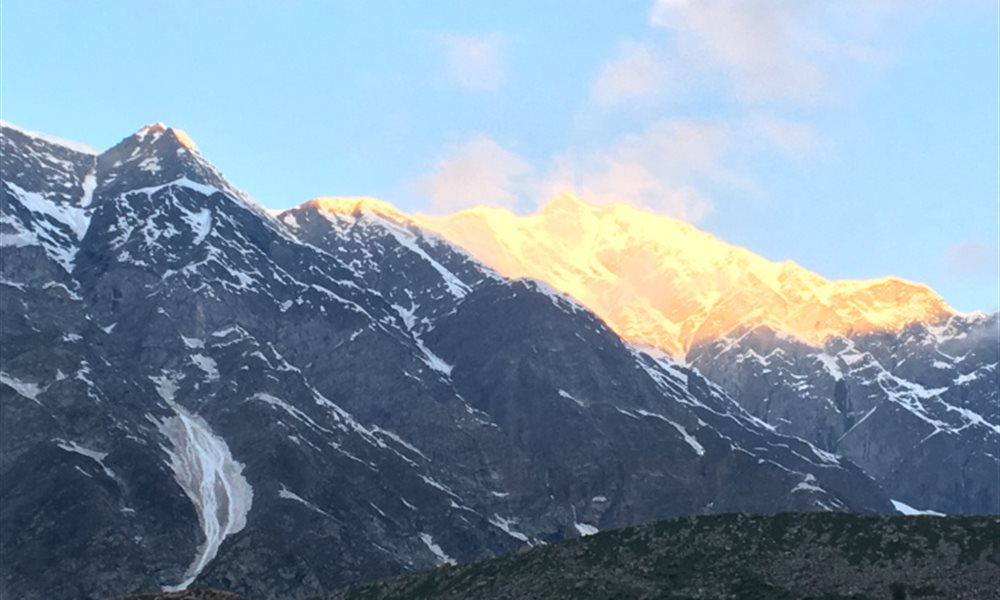 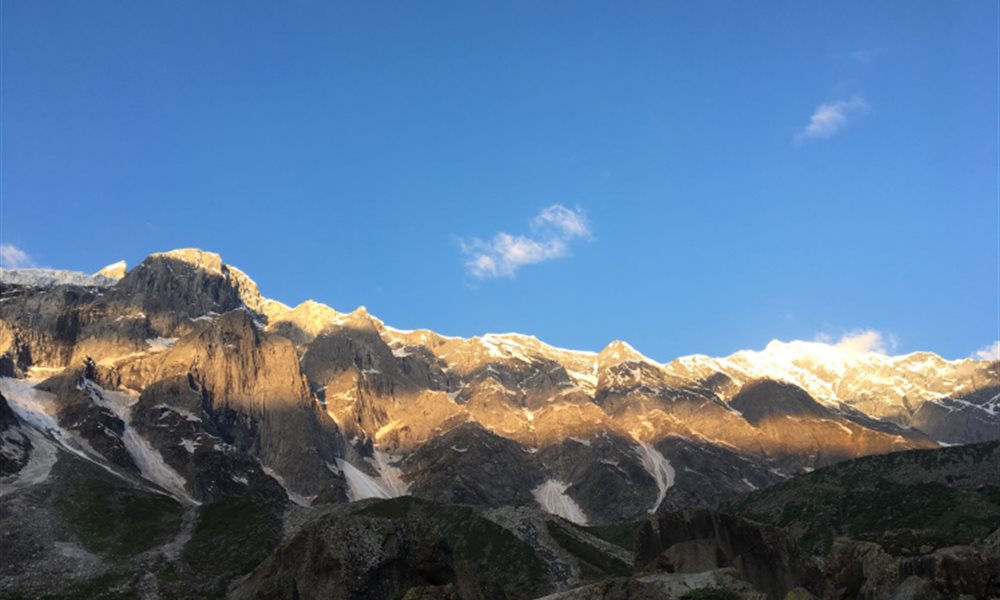 Once you are done with your morning activities, you can start preparing for the Beas Kund. Carry a light weight or days Backpack which can have your lunch and other few basic things. The terrain from here on will change and you will face rocky boulders. Far most this would be the toughest part of the trek as the boulders are quite big and they often move as well. 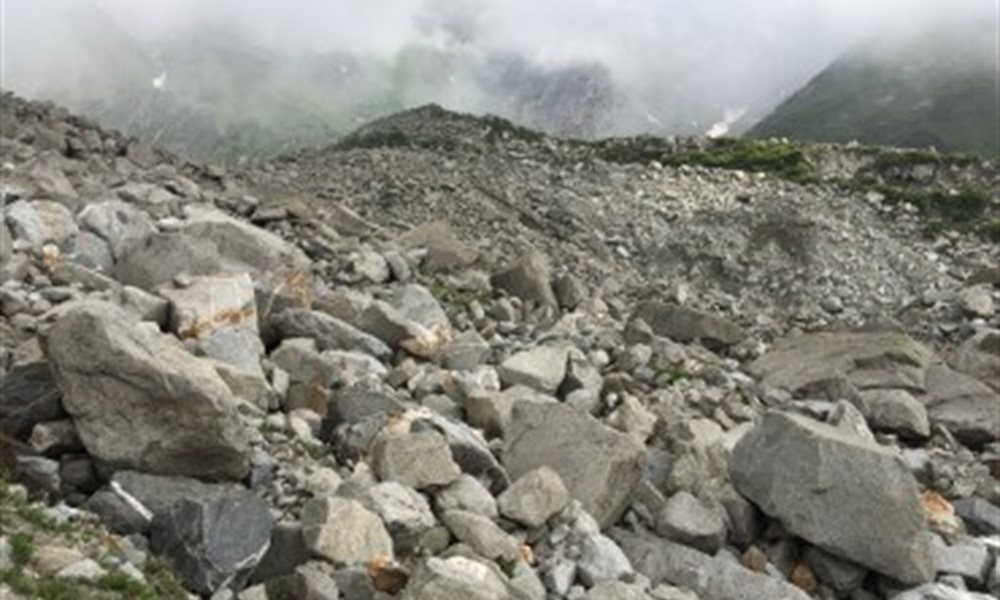 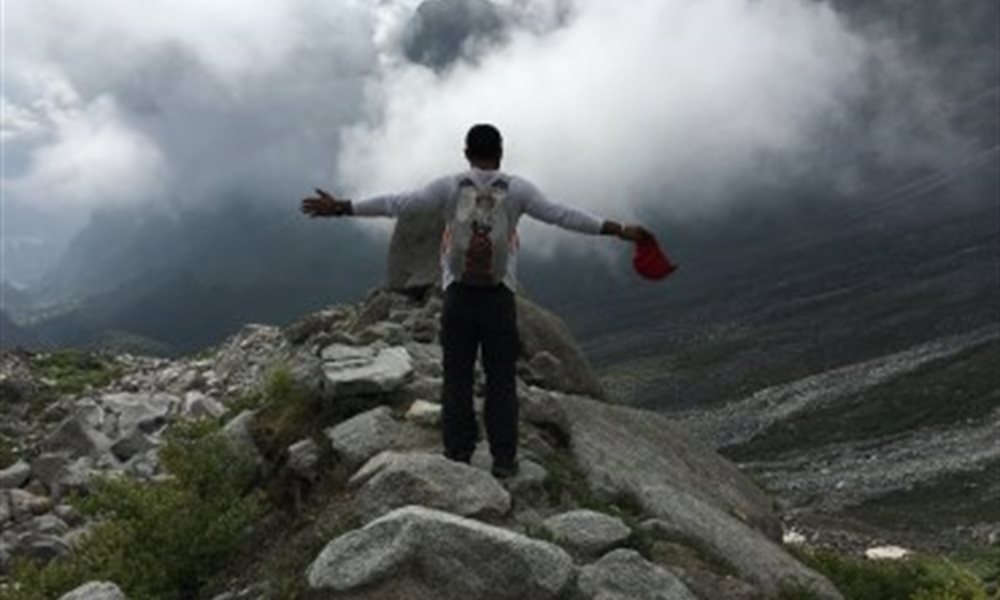 Passing this section you will have the one panoramic view of the Beas Kund Glacier and the Kind itself. Along with this, you can also see the high peaks of Hanuman Tibba, Ladakhi, Friendship, and Zero. 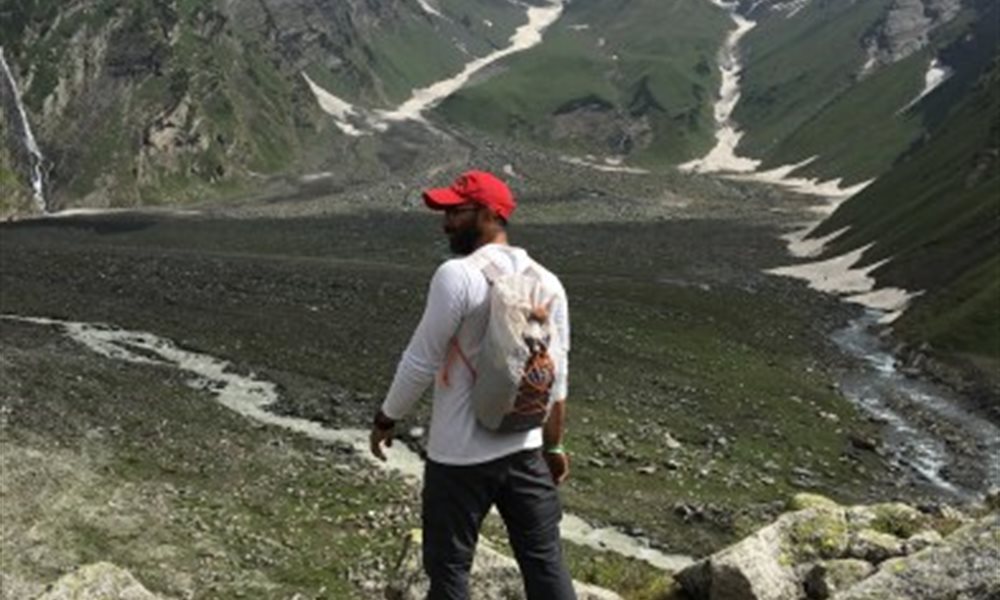 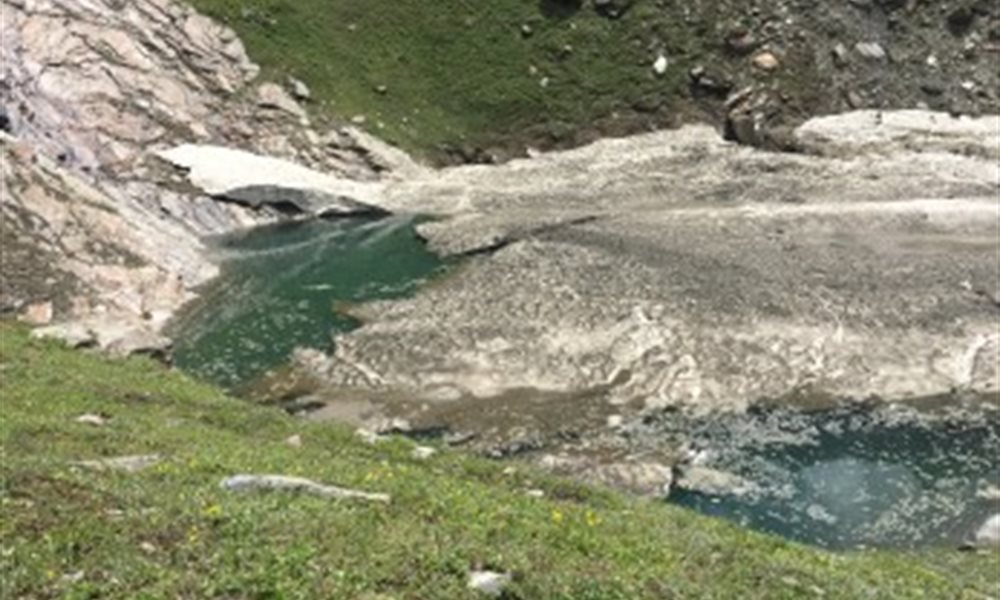 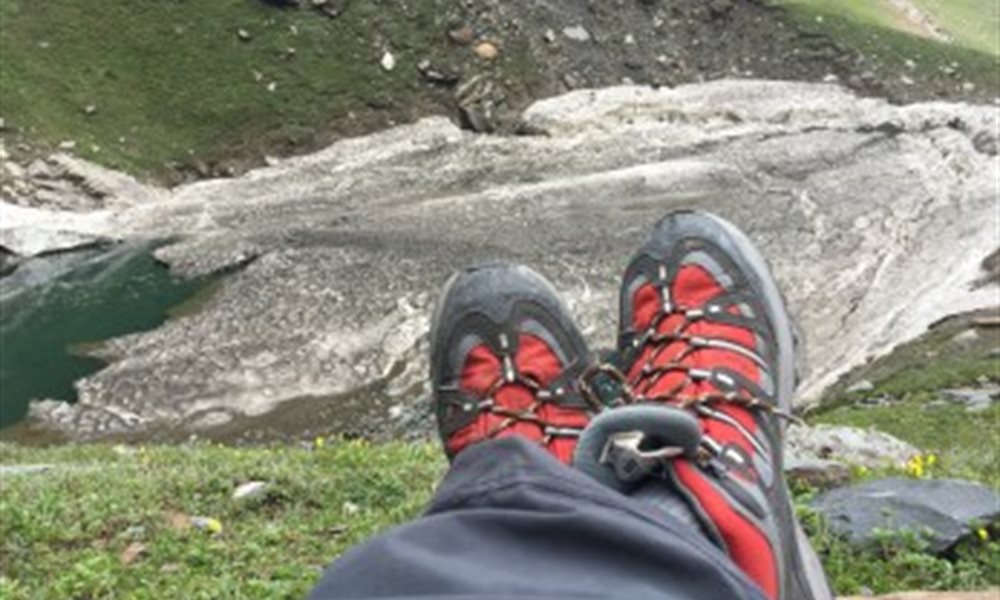 You defy all odds, walk on the unworkable terrain, go the extra mile even when your heart is beating louder, don’t eat or eat what you don’t like so that somehow you manage to reach the top and see the beauty of nature. And that's the Himalayas for you.

We spent some time at this majestic and magical place and then started to descend towards Bakarthach. While going back, we (the other guy and I who I met in the bus) lost our way and followed some other trail. After walking for 30mins, we realized that we have lost our way and the rest of the group was nowhere to be seen. Somehow we guessed the direction to go for and in few minutes we were back with the group. But the feeling of loss and being alone on the unknown terrain is enigmatic.

We took close to 2.3 Hrs to get back to Bakarthach and were welcomed by the tent crew members.

We started our descend around 8 in the morning. It was our last goodbye to such an amazing place. It took us close to 1.3hrs to get back to Dhundi. From there we came back to Manali crossing the Solang Valley which was nothing but a zoo at that time. In fact, whole Manali was jam packed due to an extended weekend. Luckily we reached the HRTC counter on time and could book our (the same bus guys and I) to get back to Delhi.... 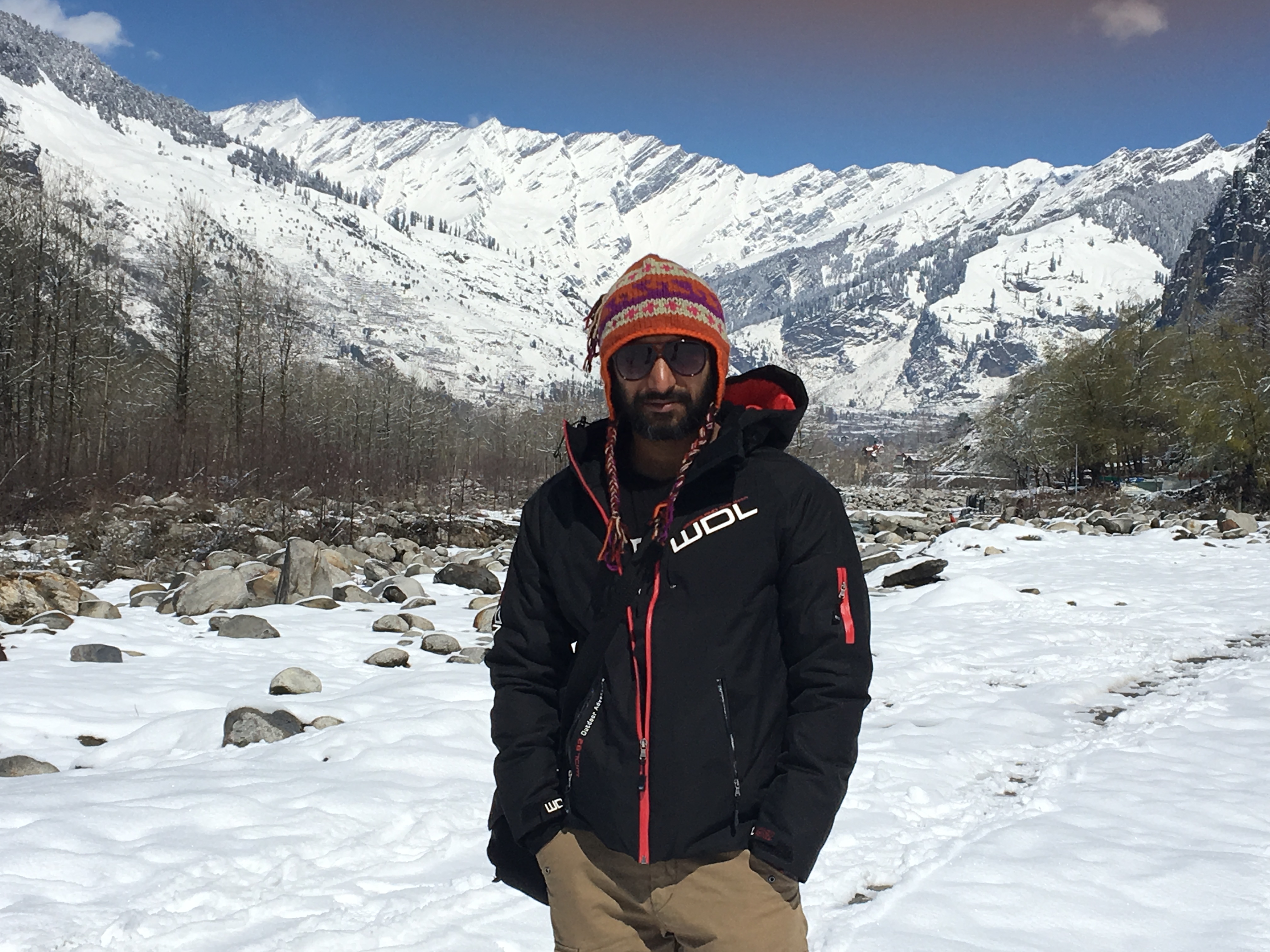