Hello Guys, Myself Shreyas Patil. I am a Civil Engineering postgraduate student by profession. Trekking has always been there on top of my list of "Things to do in Vacation". And being a resident of Pune, Maharashtra; the Himalayan treks always charm us to explore. I have done trekking in Himalaya before also but that awesome experience actually forced me to come and explore more. So, this time me along with my friends decided to go for a trek in Himalaya. I was kind of happy as my younger cousin brother Sourabh also decided to join us. But I knew that it also means that I have to take care of him during the trek as he was the youngest in our group. But I was ready for the challenge.

The decision about choosing the  suitable trek:

Initially, we had to decide with whom we should do a trek. I came across Bikat adventures Group while searching for options over the internet. The trek experience shared by the previous trekkers through videos and stories made us trust and believe over the capabilities of Bikat adventures. Then there was a question of choosing the right trek. Some of the members of our group were interested in a long 5-6 days of treks but considering that it was the first trek of all {except me

} in the Himalayas; we decided to go for a 3 days trek between 13-15 May 2016. Then after watching photos shared by Bikat adventures on their webpage we finalized Beas Kund Trek considering the difficulty level and the all-around trekking experience in different kinds of terrains which this trek offers. And special thanks to Bikat adventures as we got heavy Group Discount as we were a group of 7 participants.

The Journey towards Manali

We reached Delhi from Pune by Train(3-AC

) without any hassle. But the real struggle started in Delhi. We already Booked bus tickets to Manali so we reached at the pickup point on the mentioned time. But we came to know that the bus we booked was canceled and they have provided us with a different bus. We were really furious about that incident but we had no other option but to board on that bus as we had to reach in time next morning at Manali for Trek. At night one of the tyres burst and that wasted our valuable 5 hours. We arrived at Manali whooping 6 hrs late. But Bikat Adventure and our Trek Leader (Pankaj Deshwal) understood this unfortunate situation and we somehow reached Manali and completed our first day of Trek with him. Btw the journey towards Manali was an unforgettable experience not only because of this incidence but also because of the views of Beas River, lush green forests, snowcapped mountains. It was a feeling like nature is calling us to explore. The start of the trek was definitely not as we expected because of that unfortunate incident but we were hoping for the exciting experience ahead. 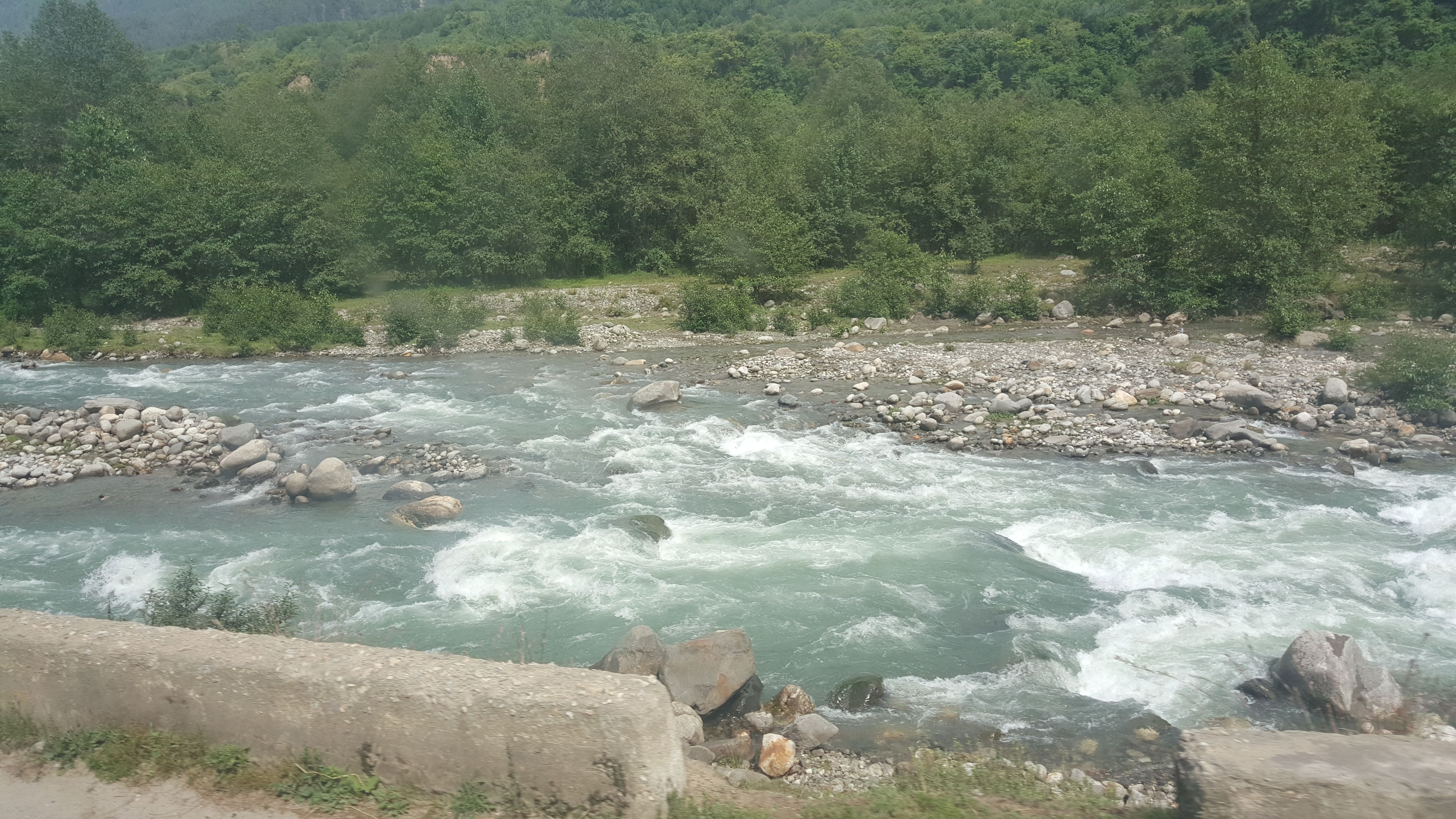 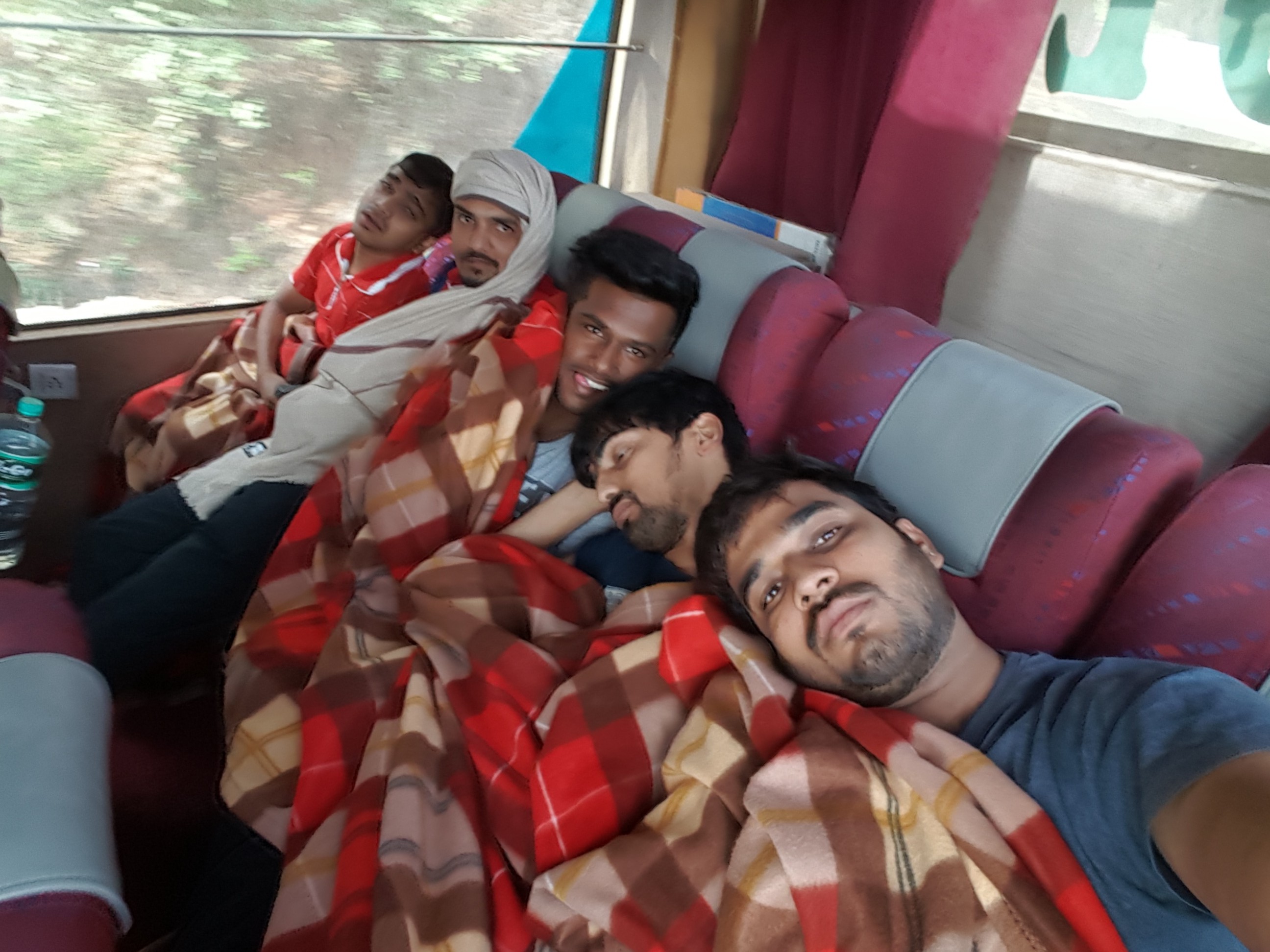 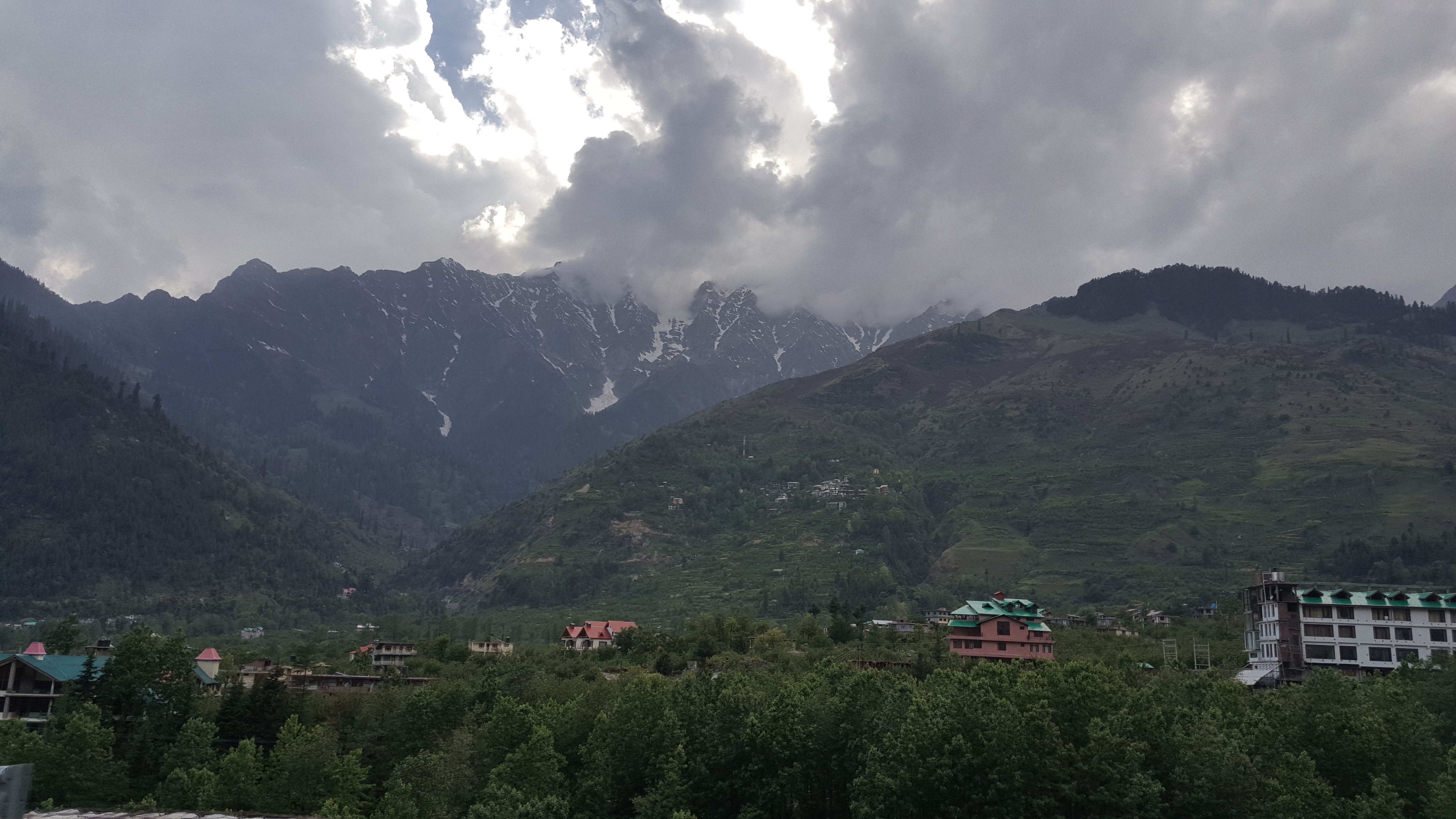 As I mentioned, we arrived late in Manali but our Trek leader Pankaj sir helped us in that difficult situation. So somehow finally our trek started from Solang valley. We had to reach Dhundi for the base camp which was approximately 8-9 Km. We came to know that the other group members already reached the destination. So we almost walked non-stop and reached Dhundi before it was too dark. The entire route after Solang Nala offered spectacular views of snowcapped mountains. The trek was partly through a forest of oak and, fir and partly on a bituminous road. That was a very tiring day because of the long bus- journey plus trekking. So we took dinner had some formal introduction with all group members and went to sleep early.

At Solang Valley (Starting of Trek) 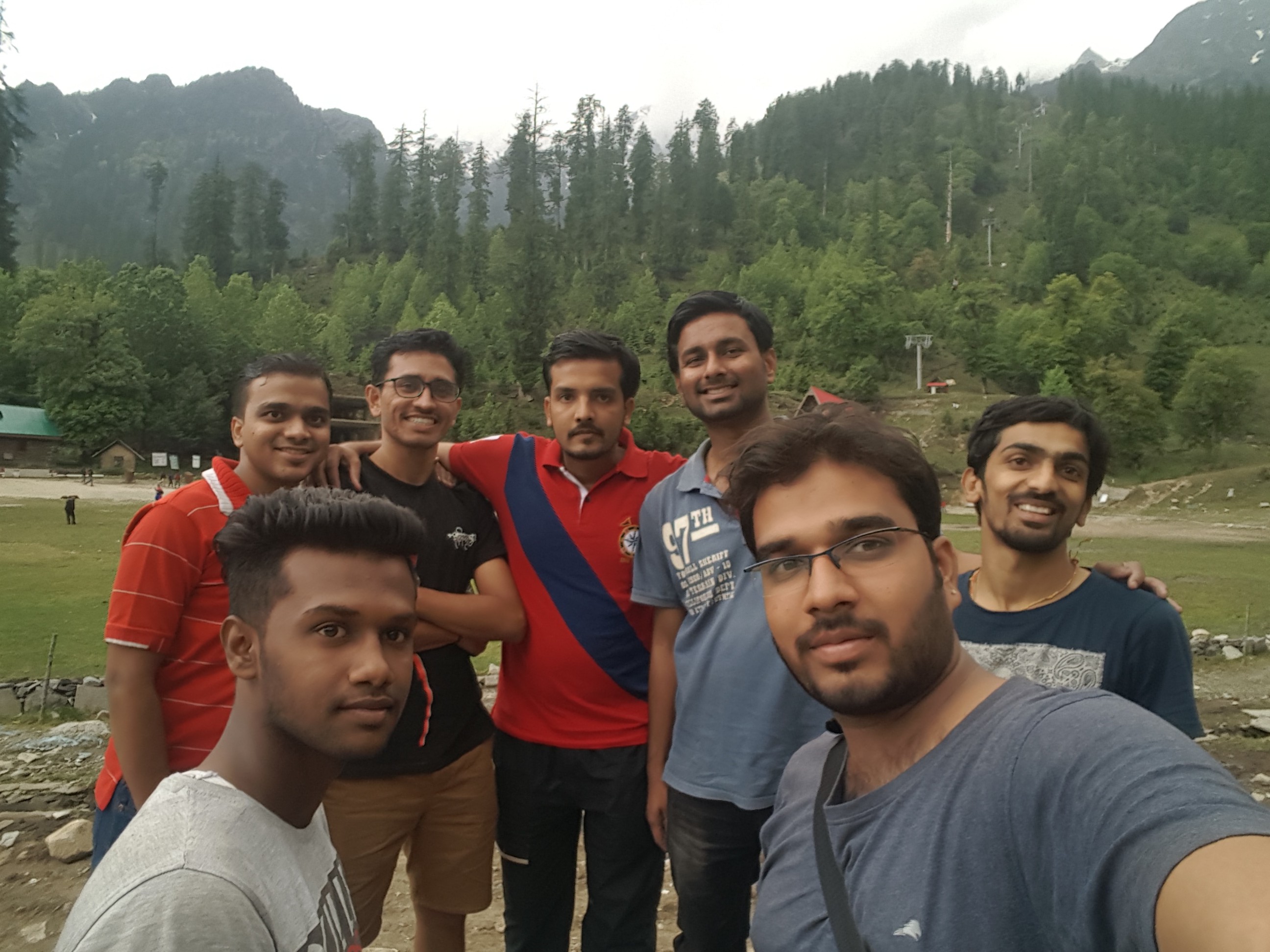 Trekking Route towards Base Camp 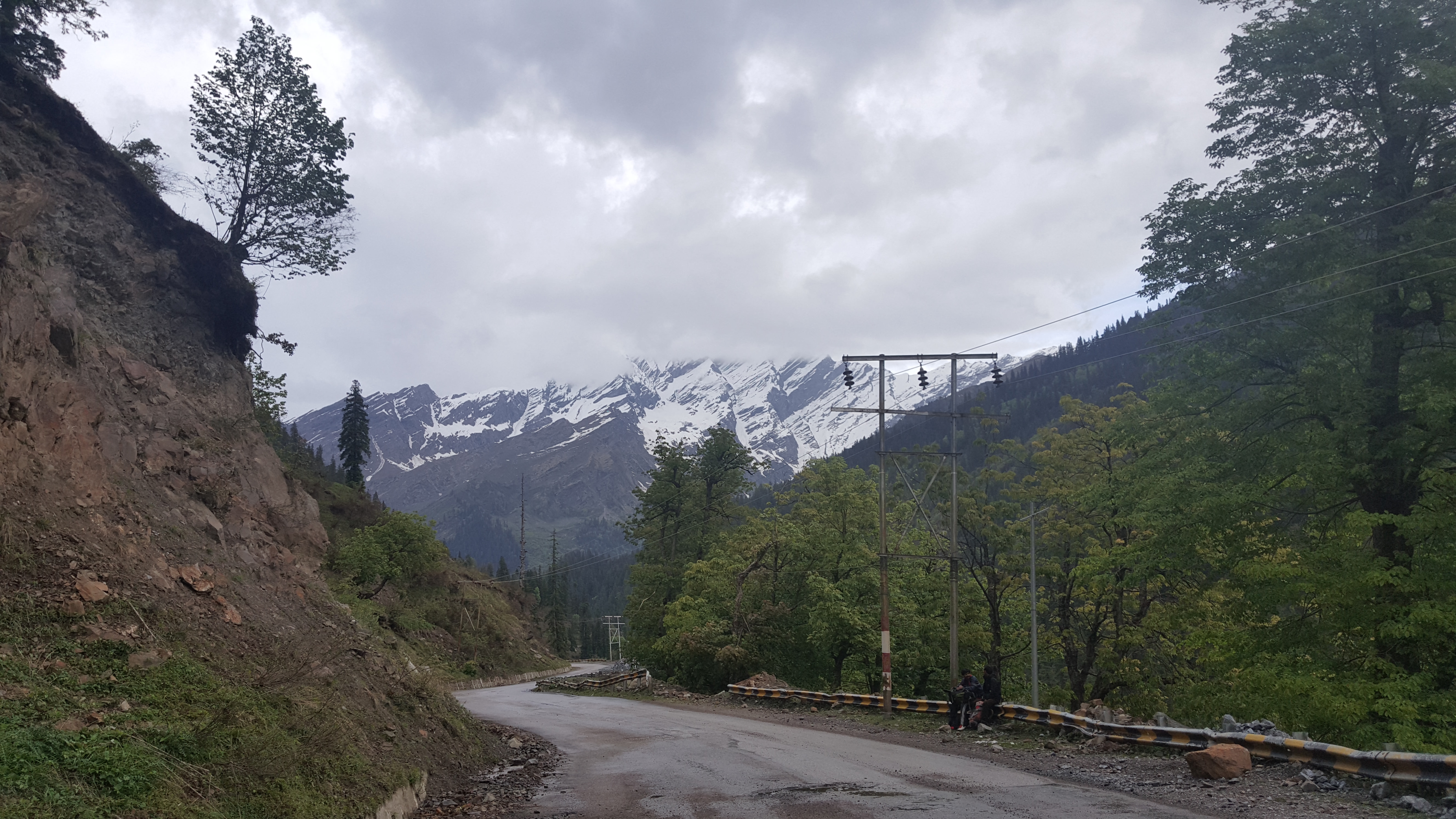 When I woke up in the morning, it was a bright sunshine out. I knew that this day was going to be very exciting as we were going to trek towards Beas Kund. We took breakfast and after a little warm up we started trekking. Initially, it was a gentle climb. The route was through green grass ground and also partly through the forest. The river crossing experience was really unforgettable. The bridge made from wooden stick and planks to cross the river reminded us that now we are really far away from any man-made things and everywhere everything seemed to be so natural and untouched.

The snowy patches which were throughout visible from previous trek route now seemed to be very near to us. I tell you one thing walking on snow is the most exciting thing. You have to be very careful in each step you proceed. And obviously, there was not a single person in our group who didn't slip or fall on the snow while trekking. It was really a challenging job. But we enjoyed a lot while walking and playing in the snow.

Then there was also a patch through boulders and rocks. It really tested our physical strength, the grip of our shoes and our decision making ability about finding the convenient rock to climb.

At that time I realized that my sports shoes have really less grip and that taught me a lesson about how important it is to choose the right type of shoes for trekking.

Now, the trek was testing not only our physical stamina but also our patience, mental strength. The journey which was exciting until now started feeling exhausting. My younger brother was almost ready to give up and go back to base camp but then I tried to motivate him. (even though everybody including me was feeling really exhausted at the final patch of trekking)

Finally, we reached the Beas Kund. The weather there was really unpredictable as we were at considerably high altitude. We took a lunch there, relaxed for half an hour, had a photography session and started our return journey. One interesting fact I especially noticed was even though everybody was tired but when it's a time to take a photograph especially girls have some hidden inert energy which enables them to take sufficient amount of efforts to get that perfect photograph.

'Getting to the top is optional but Getting down is mandatory.' While descending you require fewer efforts but it's a different challenge to control your speed. In case of Snowy patches rather than simply walking, I along with few participants decided to slide down. And it was a thrilling experience which also saved our lot of time and efforts. During our return journey, we had a nice team bonding. Everybody was constantly talking, helping and sharing some experiences with each other. So that made our return journey less painful and more joyful. We also experienced a short hail storm which made our return journey a little bit challenging but it also made our experience complete.

When we reached the base camp we decided to make a campfire. It was a delightful experience. We again had an introduction of everyone but this time an informal one.. Then playing antakshari, dumsheraj, ghost stories etc. and the discussion about various topics like politics, tourism, diversity in India, agriculture, education system, food, Make in India, blah blah blah......... There was absolutely no stopping. When the fire in the campfire started extinguishing we decided to go for sleep. (Otherwise, our discussion would have continued till morning) By this time everybody completely forgot about the painful legs after such an exhilarating trek. This day surely was one of the most memorable days of my life. 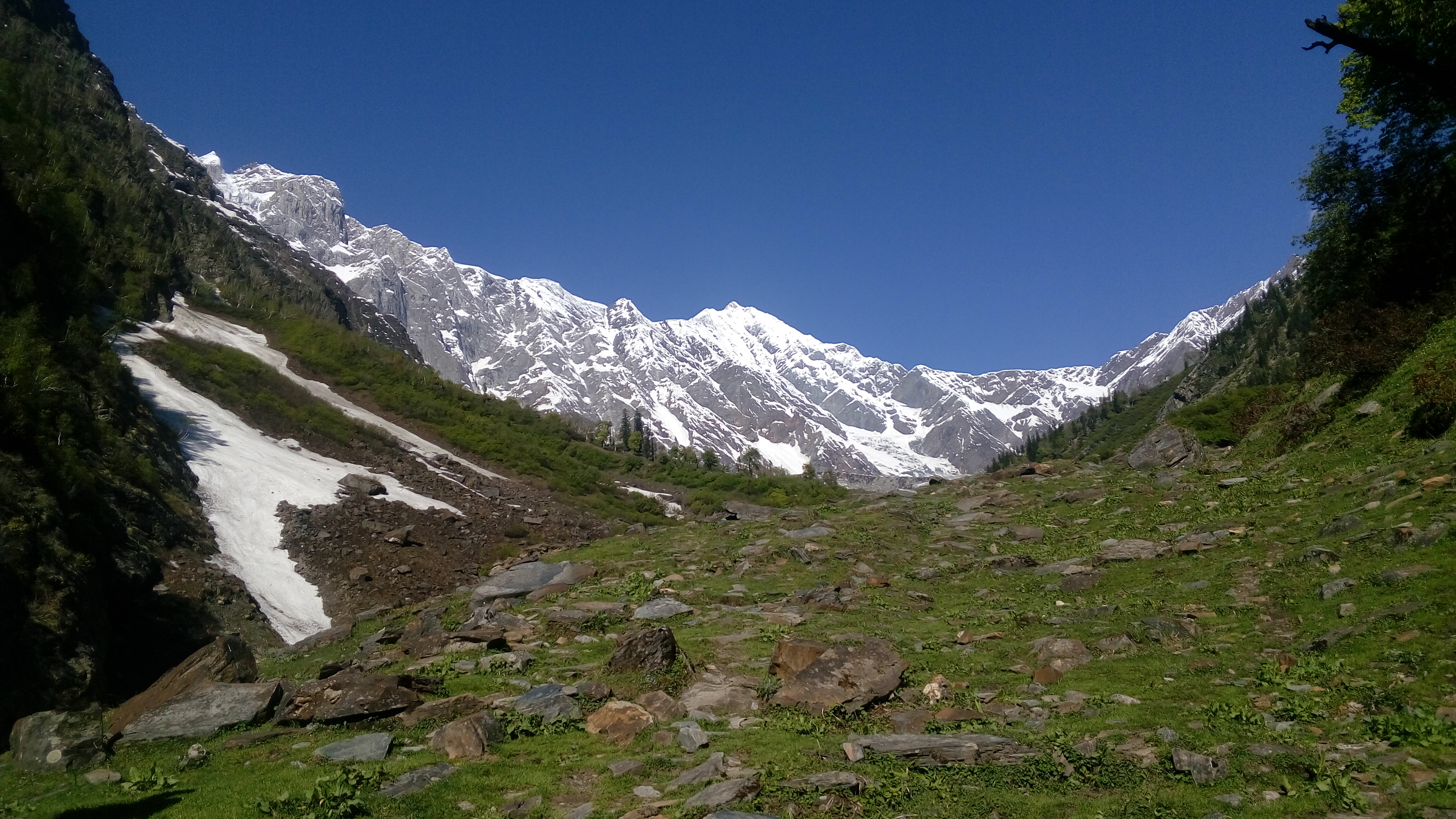 At The Beas Kund 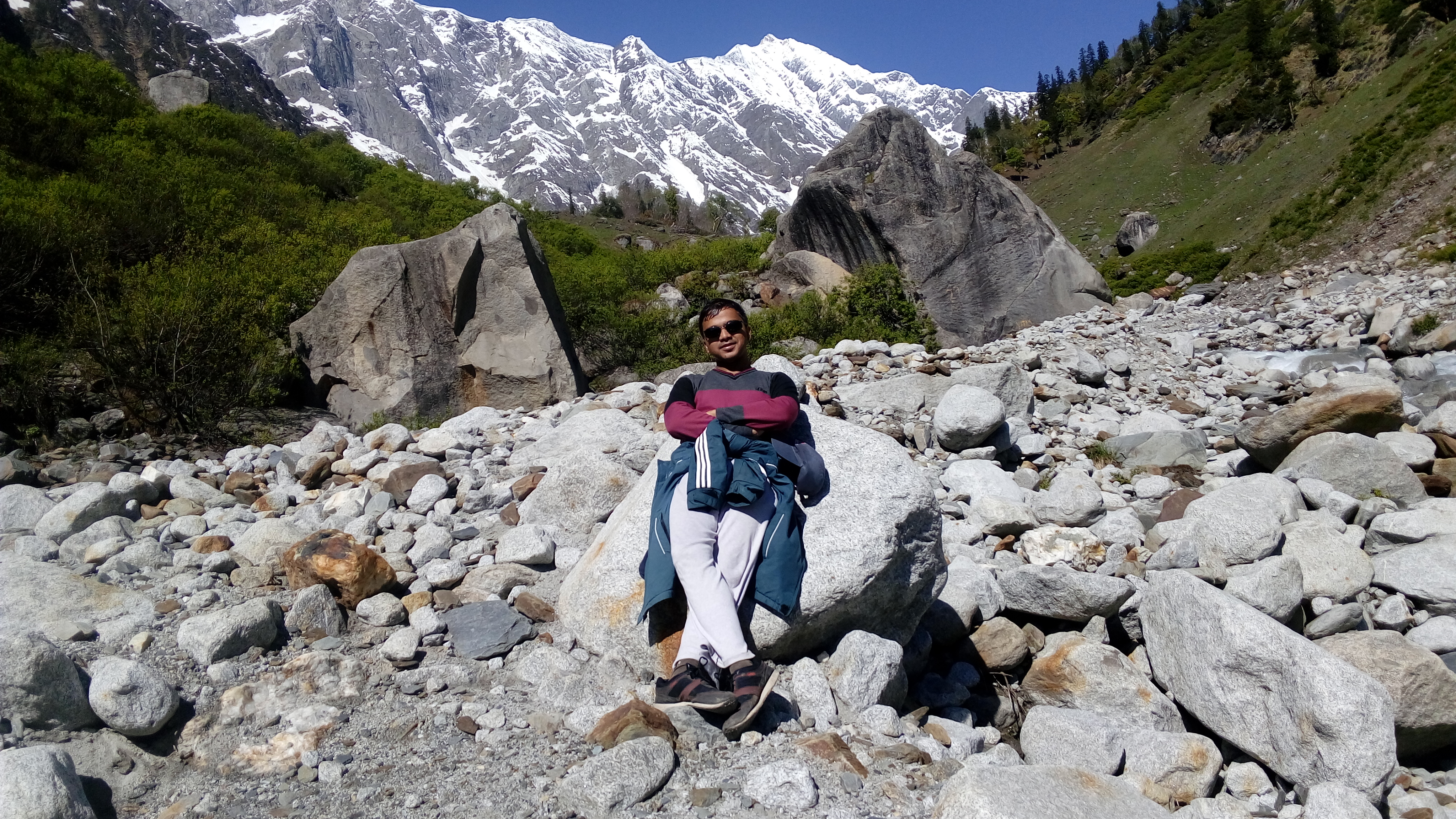 On the last day, we started our return journey towards Solang Nala and then to Manali. By this time We all realized that we have become very good friends with each other and are making fun of each other. All the group members were enjoying each other's company. We started our return journey after taking breakfast. It was the same route from which we came to the base camp. But this time the journey was more cheerful with a new bunch of friends.

All the arrangement done by Bikat Adventure Group was fantastic. And our group leader Pankaj Sir was also amazing and supportive. We reached Manali at afternoon after which everybody was going to start their return journey to their hometowns. Me along with my group from Pune decided to stay in Manali for sightseeing. At evening when I was relaxing in the balcony of my hotel room, I was recollecting every byte of information about the beauty of the nature that we saw during the trek that was stored permanently in my brain's hard disk. Truly, It was the Perfect Himalayan Trekking Experience.

Mistakes & Learning from this Trek:

Your shoes play a crucial role during trekking.

Choose the type of shoes wisely.

Follow all the instructions and advice from the group leader.

Himalayan Treks are generally paradise for photographers. But be careful no photo is as precious as your life. Do not get too excited about photography instead try to capture everything with your eyes. And remember Safety First !!!

(A friendly advice:: If you are traveling from Delhi to Manali then avoid private bus travels. Go for State Tourism Buses. Or leave the booking responsibility to Bikat Adventures)

A Message for the Trekking enthusiasts:

India is gifted with a marvelous Himalayan range of mountains, so every Indian must visit, explore, see & believe the greatness of this nature.

There are few experiences that open up not just your heart but also the lungs and your mind and Trekking just does that. Trekking is the best possible way to experience the local flavors of the destination.

In every walk with nature, one receives more than he seeks.

During Trekking more than your physical strength, your mental strength determines how far you can go. That's why I would like to conclude by an amazing quote-

“When preparing to climb a mountain – pack a light heart.”  — Dan May 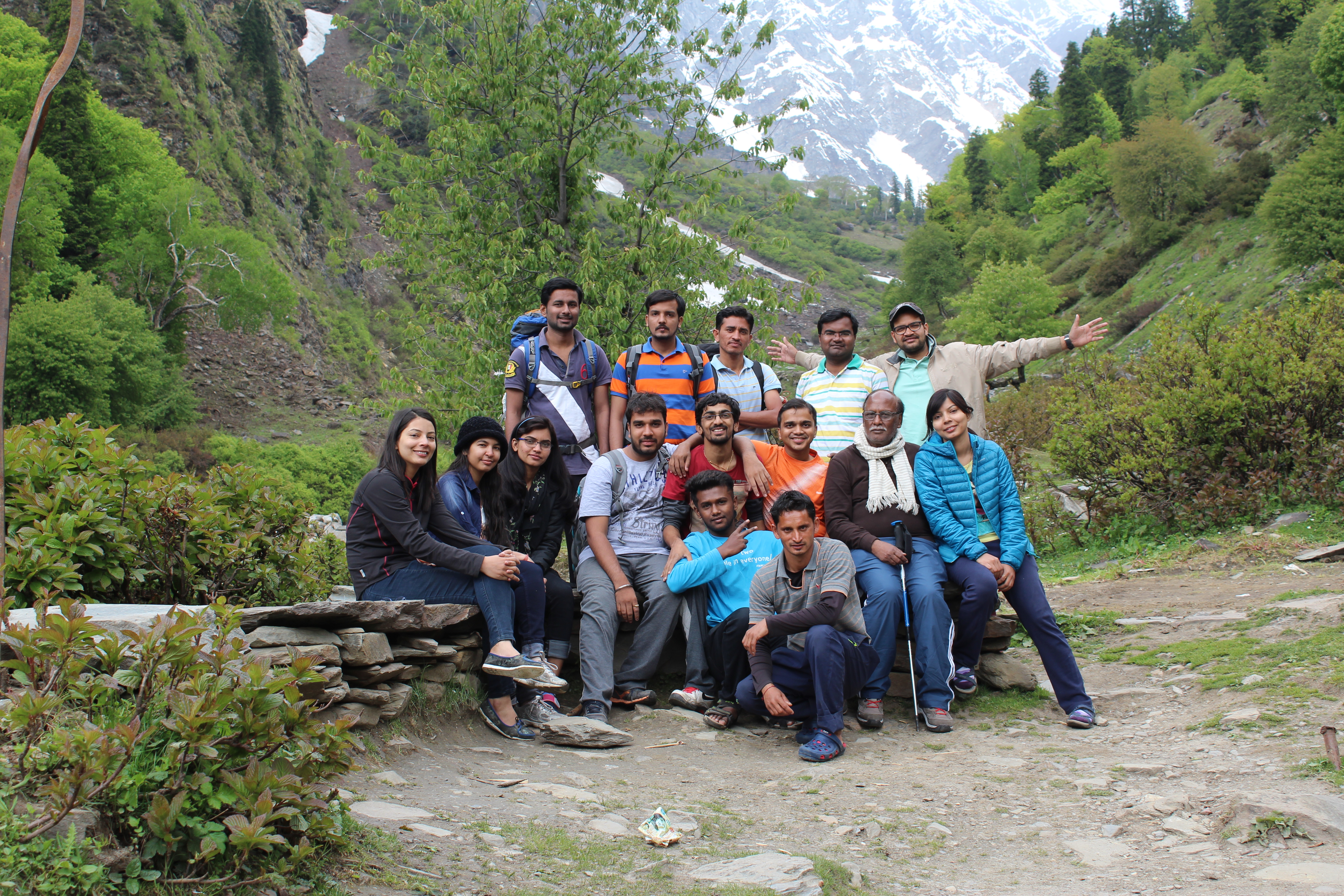 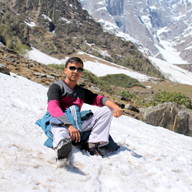