Plan for a Himalayan trek was an impromptu decision at a friend's home in Bangalore which came as an alternative to a European backpack trip, and after completing this trek I can vouch that we made the right choice. The next step was to find the right trek, with Roopkund under a partial ban regarding camping, our obvious choice was to explore the less explored mighty buran pass. Although a rookie for high altitudes (previous best ~6000ft) we settled for our journey in the first week of June to 15000+ ft. 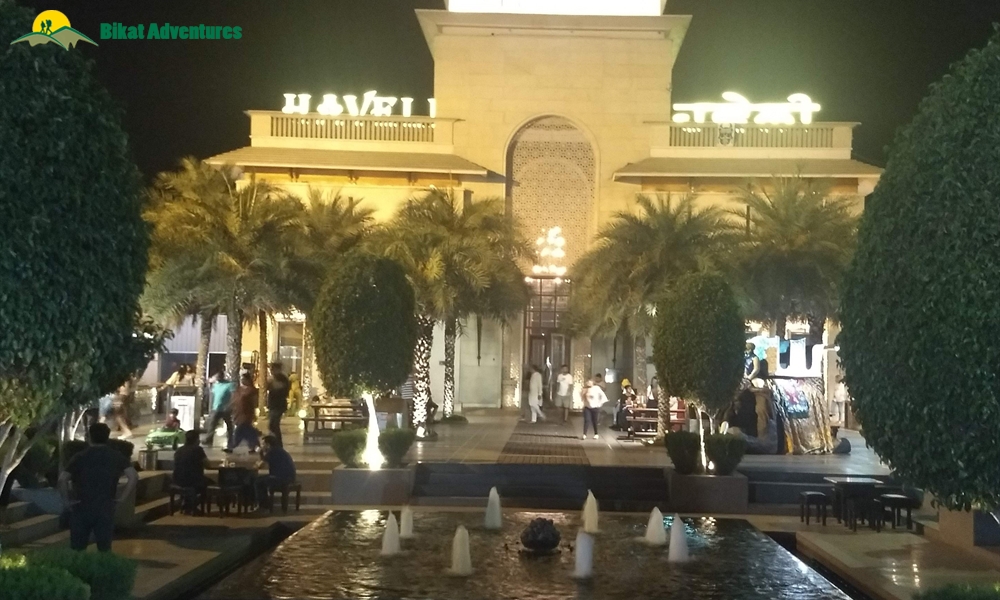 We got freshened up at Shimla ISBT bus stand and met with our fellow trekkers and trek leads. We had a long 9 hrs of a journey to Janglik via Rohru in the traveller(a minibus). We had a vehicle breakdown an hour into the journey and were forced to change to vehicle. Post lunch at Rohru we got our first view of snow-capped mountains along the pabbar river. After a little chit chat with fellow travelers, we reached our stop for the night and offloaded our backpacks which in turn were loaded to a taxi. But hey! wait! our trek lead had some other plans and wanted us to have short warm-up for trek beforehand :D to get to home-stay. We went down the valley and almost had a very steep climb for around 1000 ft to get to day's stopover. We had a brief introduction among co -trekkers and trek leads.

On the way to Janglik 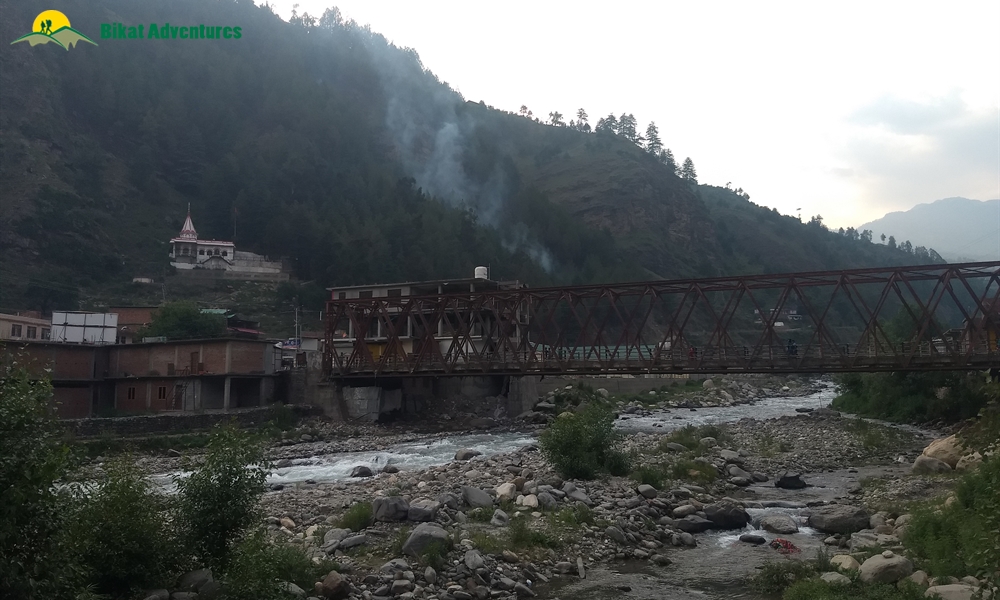 Today after getting refreshed with freezing cold water (just the start :P ) had our initial briefing session where we were informed regarding some basic do's and don'ts for the journey. Post this we hit the trail and after a steep climb for about an hour or so we reached our first stop with a magnificent view of the valley. Post this we entered the forest trail with a sigh of relief from the overhead sun. We got to our campsite at Dayara (11000 ft) for the day in about 4-5 hrs from the base and had lunch. Post this we got into our camps for some relaxations, but the thunderous storm with heavy downpour didn't let us get out till dusk and with this, we called it a day. 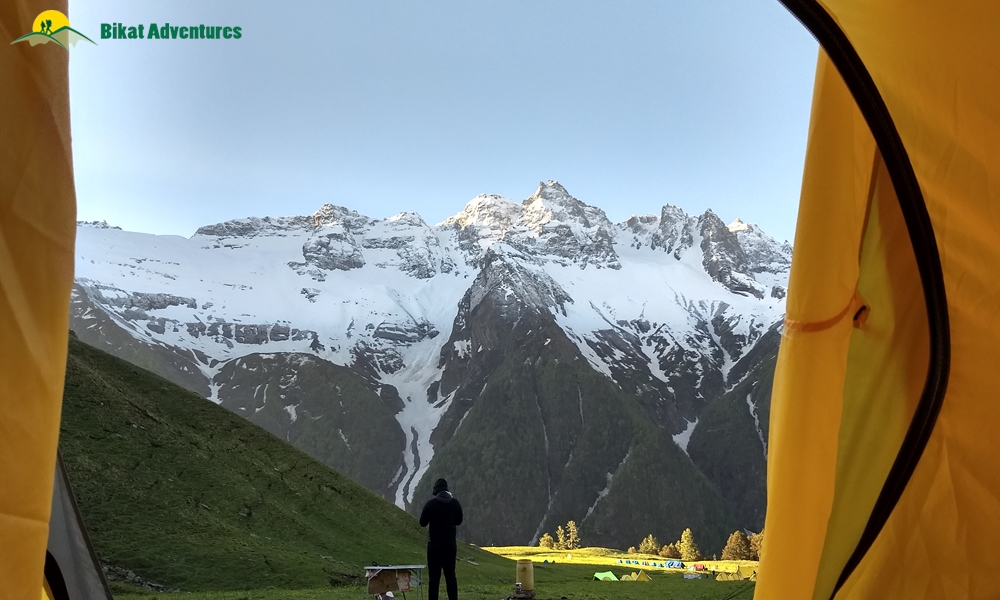 In the morning landscape left most of us awestruck with lush green grass and snow clad mountains with a sheet of fresh snow at the peak distinctly visible after yesterdays downpour. And mountainous horses and sheep coming for there morning meal. We could not resist ourselves from having a short tour around to imbibe a panoramic view and we encountered a furry dog, a mammal skull and some radiant flora along the walk. Post breakfast we disassembled and packed our tents and advanced towards our journey to Litham (11,800 ft). We mostly passed through meadows and forests of bhoj tree (Silver Birch) which were anciently used as writing pads. We also crossed the streams multiple times with few of our first patches of glaciers. After a slippery yet exciting glacial patch right over the stream from Chandranahan Lake we reached our campsite for the day with some breathtaking mountains looking on us. In the evening we also had an opportunity to play with Frisbee at around 12,000 ft :D , which also kept our bodies warm, helped us to acclimatize well and also gel up better as a group.

first sun rays of the day 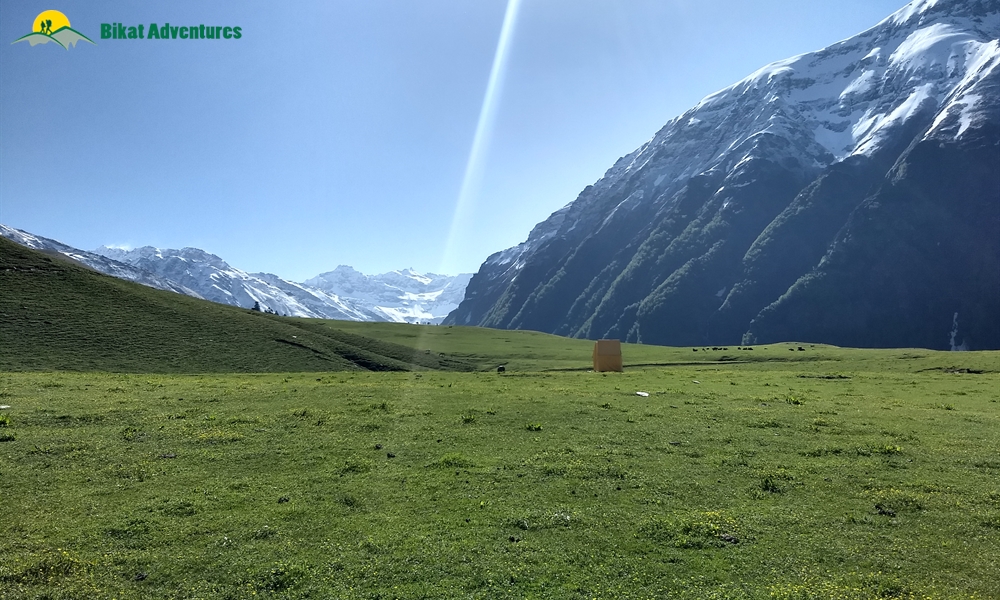 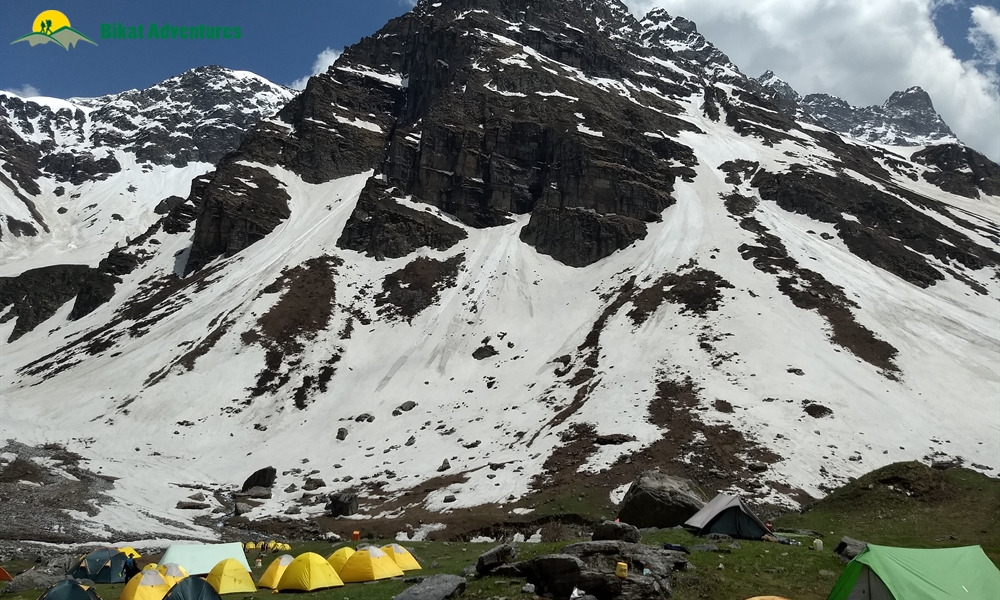 Chandranahan Lake (Moon Lake) having a special space in Hindu mythology at 14000 ft is formed with a combination of 7 different frozen ponds, was our destination for the day. Today was an excursion to acclimatize ourselves (rather brace ourselves :D ) for the pass day. We also needed to come back before noon, since weather up there usually gets stormy up there. Although in view from our campsite, the lake was yet so far. We usually moved zigzag on the trek to make our climb less steep. We came across big glacial patches and had a 60 degrees odd hard ice patch in the end, which was slippery as well as intimidating. On reaching the top to the lake along the stream of glacial water gushing down forming a waterfall, we realized the might of it. We were walking over the frozen lake with few open patches giving an exquisite views. After having a few pictures clicked we came back to our campsite and relaxed. In the evening some of us went to the riverside and sat to embrace the calm view of the sun going down amid overwhelming flow of water through river stones. 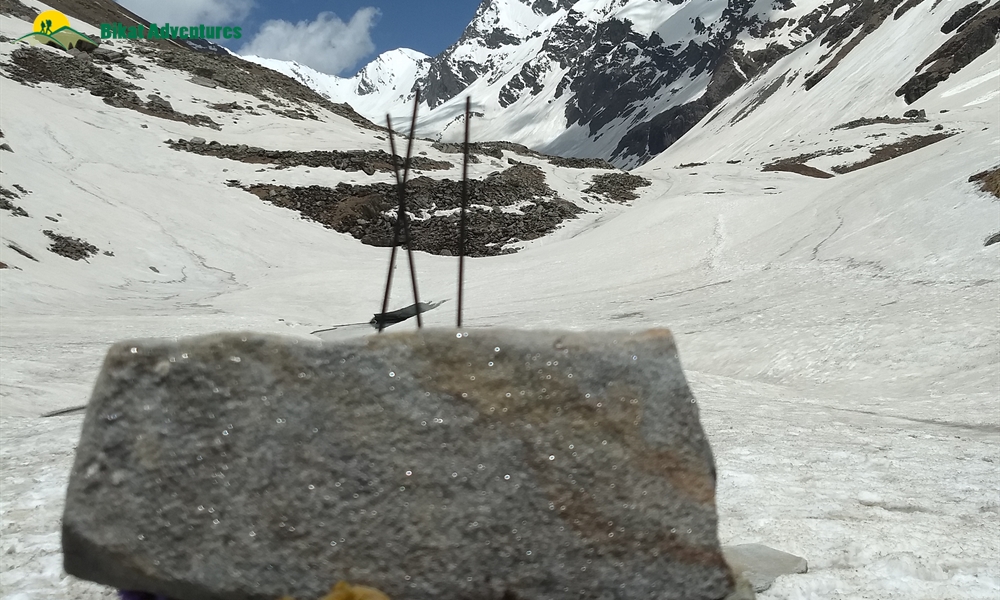 Our campsite in Dunda( 13100 ft ) was just around the corner as they say :P to Litham campsite. Today the entire trail was over the hard ice and we left early since we were able to see dark black clouds coming from behind. Although initially, it was a drizzling and as it got heavier Poncho's and rain gears started to come out. I had a very thin poncho made of polythene which was recommended to use for drizzles :P water was seeping through it, as it got heavier we started to experience the hailstorm which soon converted to snowfall, the scene was as stunning as it can get. We reached our campsite in the midst of heavy snowfall and cleared our tent of snow periodically. As the snowfall slowed down we came out of our tents and started to relish the fresh snow. Post our lunch session we were provided with gaiters and microspikes (which are very useful for gripping on a thin sheet of frozen snow) and had a drill for tomorrows rappelling. Coming back we had our hands back on Frisbee and had deep discussions regarding random topics (can never keep them out :P ) and shared our different experiences. Everyone was excited about the coming day....

Campsite at Dunda after snow 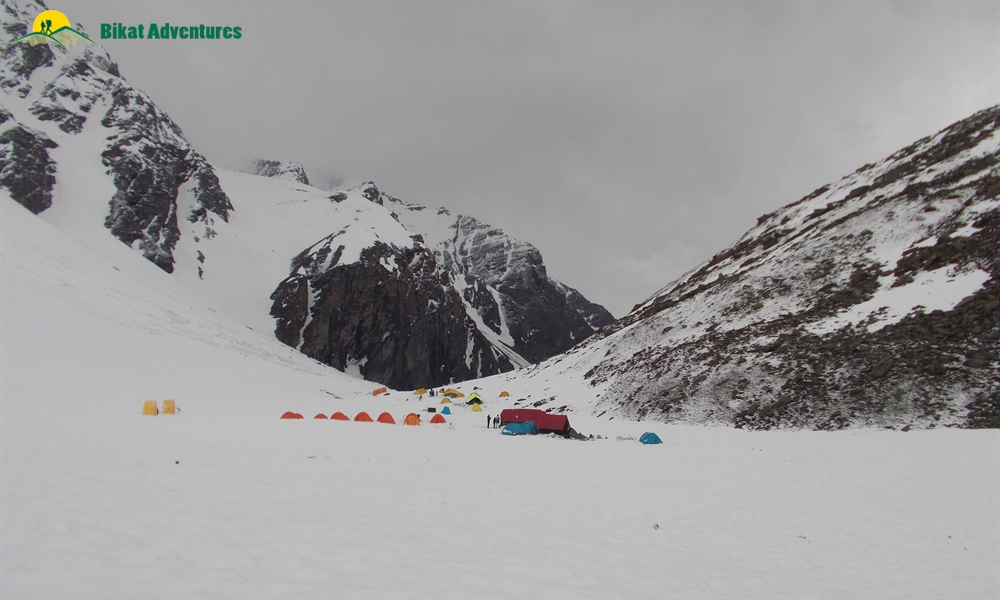 Our day started at 1 AM in the night with a dazzling view of Milky Way and we all had the early breakfast, switched our head torches on, and started for the journey to the top. We all were in the symmetric and disciplined manner with baby steps to pass as our trek lead used to say "Sab ek sath rhythm bana ke chalenge". Slowly and gradually we were on the move with sipping water along the way to keep ourselves hydrated (or just a way to catch the breath back). Dawn was about to break, water in our bottles had converted to ice and with each patch, the steepness got increased (max. at 70 degrees). Some of us had started feeling those altitude headaches and vomits but the grit and determination got all of us to the pass at the sunrise. That was some feeling at the top...

View of the pass after crossing 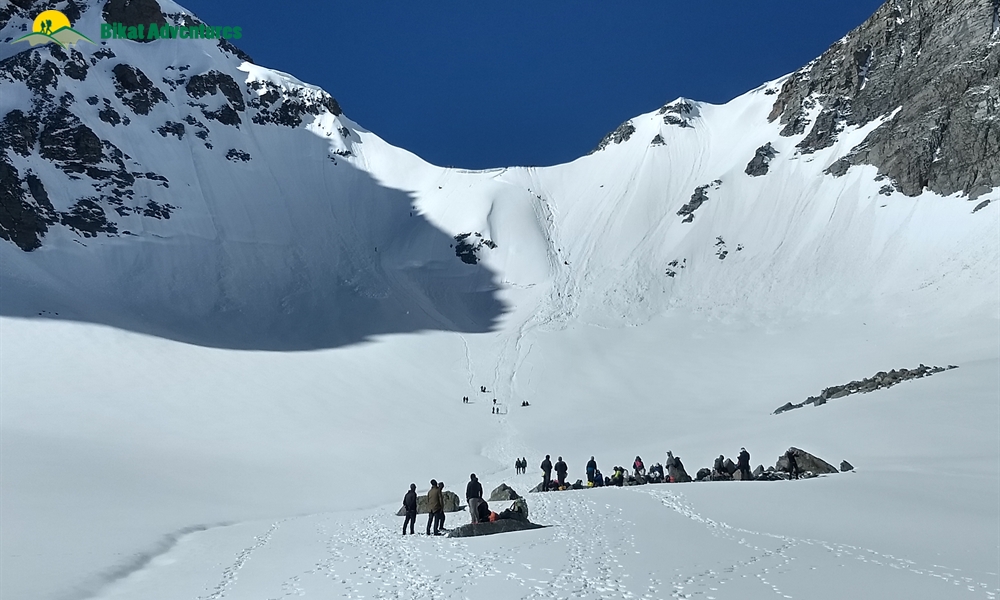 Today was the final journey of the trek with a gradual descent to Barua village (6000 ft) during which we encountered trees of apple with apricots and had a sight of a motor-able road after nearly 5 days. We also got some delicious cherry from a local farmer during the journey, post reaching Barua we looked back and congratulated each other on a successful high altitude trek, first of many. We bid each other a goodbye with a hope that our paths will cross again, and boarded our vehicles to Shimla. 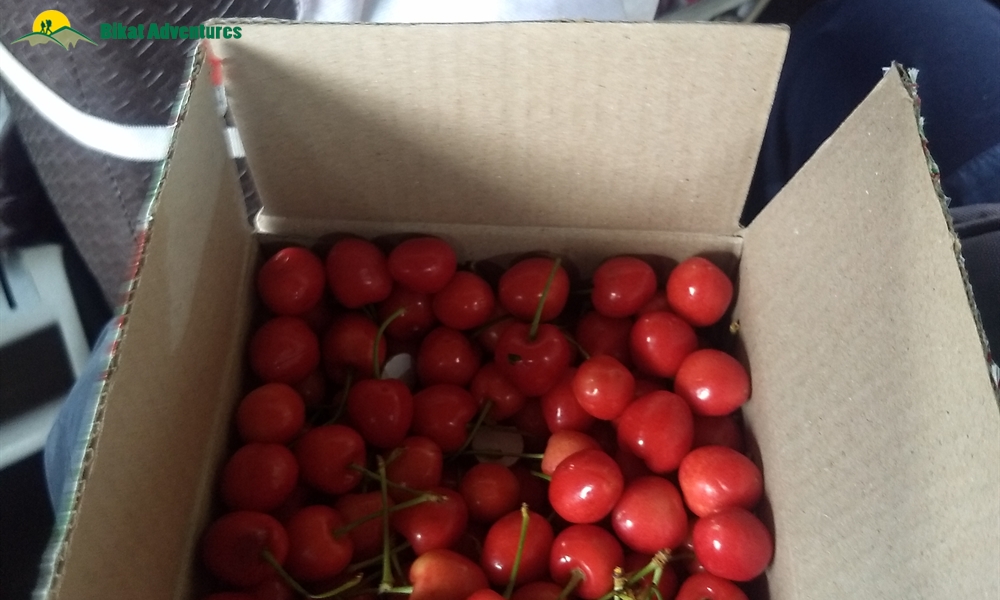 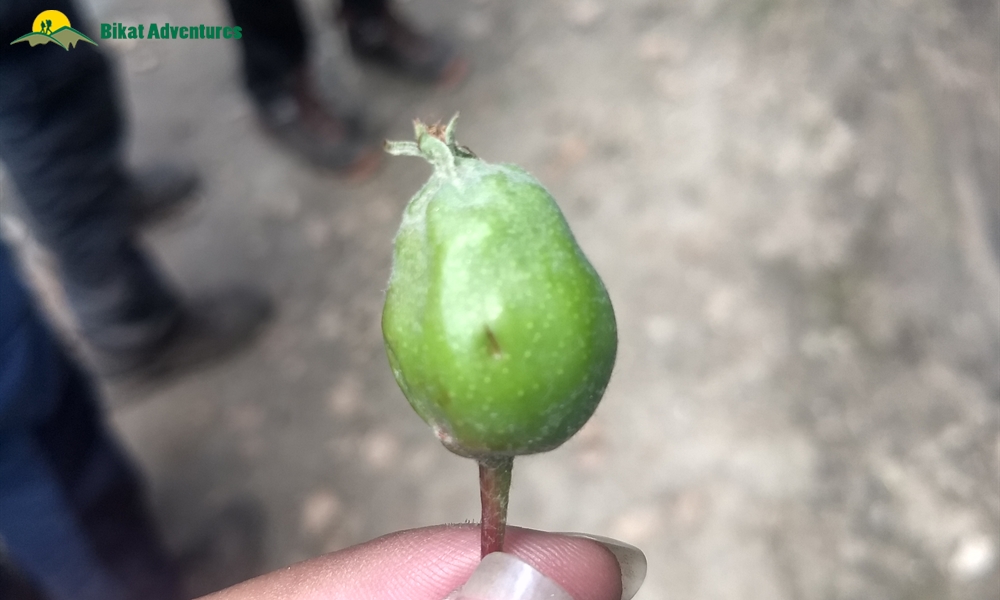 Although neglected but healthy and nutritious food is one the necessary ingredient for a successful multi-day trek. Big kudos to our local team for keeping us well fed and saving us the pain to get water from streams. We had a good three meal routine with multiple black tea and soup add-ons. Also at the start of each day's trek, we were provided with energy bars, packed juice, and biscuits for our trail. Also not to mention we were provided with warm water for drinking where ever necessary. Important note for acclimatizing at high altitudes to drink as much water as you can. 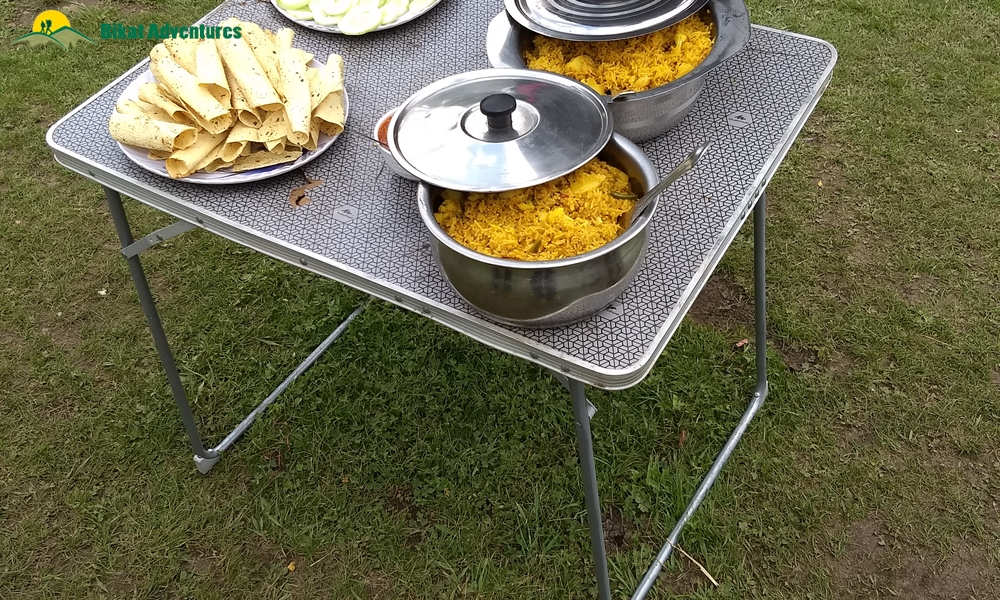 Since this was a week-long trek, we planned our travel with bikat adventures . All hail to our trek leads, guides and the entire team for such a smooth planning and delightful experience. From guiding and motivating us throughout the journey with best practices at this altitude to having those cooldowns after each day's stopover. We also had a diverse group of co-participants ranging from business owners, journalists, scientists, IT professionals, freelancers to retired professionals. People with diverse background and sharing their experiences is what makes these treks to a learning adventure.

In the end, would like to just say 'mountains' teach us a lot! :) 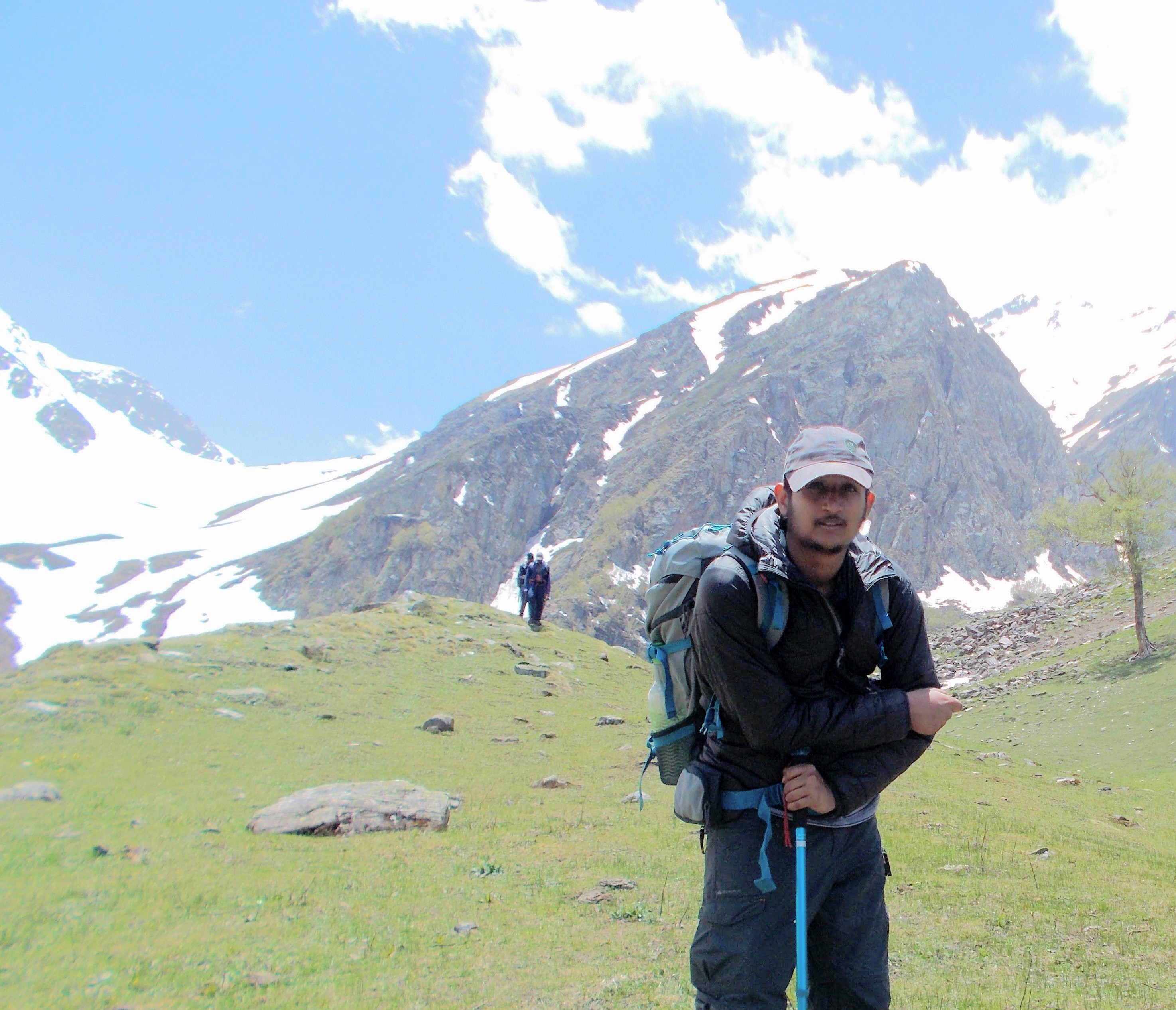